Secret Value of Zero, The 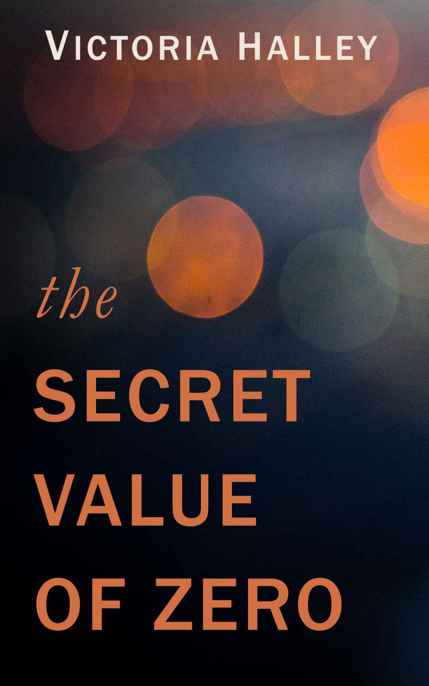 THE SECRET VALUE OF ZERO

This book is a work of fiction. Names, characters, businesses, organizations, places, events, and incidents either are the product of the author’s imagination or are used fictitiously. Any resemblance to actual persons, living or dead, events or locales is entirely coincidental.

For my mother, who made everything possible.

MEKE LICHOTA stood in front of a window, a black shadow against the brightness outside. She pressed her long fingers on the cool glass, pushing against the unyielding barrier. Her chin jutted out as she pushed. Meke didn’t really expect the glass to move. It hadn’t moved in the last eight years; it wouldn’t move today.

An insistent jab jerked Meke out her meandering thoughts. Meke turned around, already frowning. Brody, one of the institution’s guards, stood an arm’s length away from her. His mouth hovered somewhere between a grimace and a frown.

Meke knew she shouldn’t be angry. She should be used to this. As a Zero, she was at the bottom of the social heap. The empty circle on her hands showed everyone her rank as a Zero. That mark had been there since she was a year old.

This nation sorted and ranked everyone according to intelligence and aptitude tests at age one. At the top were the Stars—the scientists, the doctors, the geniuses—and then you had the Fivers, the smart, capable ones whose aptitude lay somewhere other than science. Squares, the average ones, occupied the large middle. Equis and Zeroes populated the remainder. Meke, as a Zero, lingered at the very bottom of Prosperon’s bell curve.

The triangle on Brody’s hands ranked him an Equi, one level above Meke. A solitary step up and Brody flinched whenever he had to touch Meke or any other Zero. Somehow, a rumor had started somewhere that touching a Zero could reduce one’s intelligence and abilities. No scientific evidence ever proved this, but people still half-believed it.

Meke swiped away her blond hair—only a shade away from brown—and leveled her light brown gaze at Brody. That was all she could do because otherwise, Brody could retaliate. If Meke didn’t respond instantaneously, Brody would squeeze her arm a few degrees too tight and would sneak in a few shoves when the Stars weren’t looking.

Meke knew she got off easy. Her body could still stand and fight back—in theory at least—but other Zeroes couldn’t. She had seen Brody and the other guards push, pull, kick and scream at the other Zeroes, many of whom couldn’t fight back. Within a few months of arriving at this place, Meke knew that if she told any of the Stars or even looked at the guards funny when they tripped a Zero, she would find her food rancid and her bed sheets soiled. They were always accidents.

Sometimes, Meke would wonder what she would do outside this place, where she could go after she got better, away from the cruel guards. The institution’s disinfectant smell made her nauseous every day, making her wish that she could stay outside where the air was crisp and fresh.

Brody walked down the hall so quickly that Meke had to scramble to catch up. It was time for her appointment. As she walked, Meke saw the other Zeroes, slumped in their chairs, their eyes dull. Some were so gray that Meke wondered if blood still flowed in their veins. Empty circles glowed from all of their hands.

An itch spread from her inner elbow up her arm as they walked down the long corridor, insisting that Meke scratch it. But Meke refused to scratch it when she was going into the examination room. A bluish rash had spread all over her arm, radiating from the injection site. Meke’s heart thumped against her chest thinking about that rash. Maybe she was finally succumbing to the sickness that had lain dormant in her body for the last eight years. Not to mention these hallucinations that she had been having.

The examination room door was already open. Meke could see Doctor Ball at the desk, hunched over a bunch of papers. Doctor Ball was a bit of a traditionalist—most Stars used computer screens and holographs for their notes and diagnoses.

Doctor Ball looked up, eyes still bleary from inspecting his scribbles. He looked at Meke and smiled. Doctor Ball wasn’t like most Stars. Doctor Ball actually looked Meke in the eye. Most other doctors—Stars all—flinched when they touched Meke. Not only that, but Doctor Ball talked to her. Meke looked forward to that part of the examination, but not much else.

Meke walked in and sat at the large chair in the middle of the room. Nothing other than the examining room chair, Doctor Ball’s chair, a desk and a cart occupied the room. Vials filled with navy-colored liquids stood in the cart. The color of the vials in the cart was the exact same shade as Meke’s now-fading rash. She swallowed and braced herself for the injection’s sharp pinch. No matter what anyone said, nobody can get used to weekly stabs of pain.

Doctor Ball returned to his papers, leaving Meke looking around in the chair. He ran a hand through his wispy gray hair. His wrinkles looked deeper today than yesterday. Meke worried that the pressure to find a cure was crushing Doctor Ball. He kept talking about some man called Lucio Donner who pushed for a breakthrough every day.

Meke Lichota couldn’t hear a thing, never could. Her ears never permitted the sound waves to reach her brain. Out of necessity, Meke used the language of hands and faces. Meke’s deafness automatically placed her in the rank of Zero. All Prosperon citizens with defects got branded with an empty circle on their hands at age one. As a Zero, she couldn’t go to school. No Zero got much in the way of money, fame, education, respect or even food. Prosperon had only so much food, jobs and money; Zeroes were the last in line for these scarce resources.

Meke looked at Doctor Ball, waiting for the examination to start. Doctor Ball peered into her eyes, ears, mouth and finally, he rolled up her sleeve. His eyes narrowed as he beheld the bluish-purple splotches on her inner arm. “How long have you had this rash?”

“Just a week,” Meke said, looking away. “It was blue last week, and it itches like crazy.” The red marks where she had scratched a bit too hard that morning stood out against her pale skin.

Doctor Ball laid a cool hand over her inner elbow, quelling the itch. His thin hair shifted so that Meke could see the shiny scalp underneath as he bent closer to look. “I’ll give you an ointment for the rash. Next time tell me before our weekly appointment, okay?” Doctor Ball smiled at her, making Meke’s tight chest loosen. She may have worried for nothing. “Now, tell me, does anything else feel strange? Out of the ordinary?”

Meke clenched her fists in her lap. Her vision had been strange lately. Perhaps strange wasn’t even the right word for it. She wasn’t even sure if it was her vision. She felt like she could see things that she shouldn’t be able to see.

Last Thursday, as she was reading, a slight tickling sensation burst into her brain. For some odd reason, she had been certain that there was something moving around in the hallway. After several minutes of trying to ignore the insistent tickle, Meke went to the door and opened it a crack. What she saw hadn’t been unusual, but startled her all the same. She saw Blaise, one of the institution’s men, pacing the hall. He had been precisely where Meke felt movement. After that day, the tickling sensation faded, and Meke thought herself rid of it. But a few days later, it surged back and then disappeared.

Meke could only think of two possible explanations for these feelings. One, she was getting sick beyond a point of a cure. She would shrivel up and fade away before she had a chance to walk away from the institution. Two, she was going crazy. Meke refused to be either sick or crazy.

“No, no other side effects,” Meke said, a twinge of guilt snaking into her.

Doctor Ball put a few stickers on Meke’s head and an image of Meke’s brain, appeared on a small computer screen. The twists and turns of Meke’s brain showed in sharp relief on the screen. He frowned at the image and wrote some more notes.

“Is there anything wrong?” Meke asked, her heart beating faster.

Doctor Ball hesitated. Finally, he shook his head. “There’s some unusual activity in your visual cortex, but since you don’t have any other symptoms, I don’t see a reason to worry. I’ll check again next week.”

Meke’s throat tightened. These words didn’t sound good. She raised her hands to tell Doctor Ball, but she dropped them. It didn’t matter either way. Either she was getting sick or going crazy, with or without medicine.

Doctor Ball clasped his hands and sighed. “I hope your studies are going well.”

Meke didn’t really understand why Doctor Ball gave her books and a tutor. She was a Zero, after all. Zeroes, like the Equis, got the minimal education that they needed for whatever job they had, if they ever got one. Doctor Ball once told Meke that her job was to be a patient. Patients needed to describe their symptoms to the Stars, so Meke got books to help her expand her mind and her vocabulary. Meke liked these books. The books made her feel important, more than the Zero that she was.

More out of habit than obedience, Meke extended her arm toward Doctor Ball. She watched as the needle slid into her skin. It didn’t ease the burning sensation to see the injection, but watching made Meke feel calmer.

With a practiced motion, Doctor Ball taped a piece of gauze on the tiny wound where a drop of blood swelled to the surface. “So, that’s over. You can go now. Remember to tell me if you notice any side effects. Say hello to Arya for me.”

Doctor Ball slouched in the chair as Meke walked out. His eyes wavered as if he wanted to close his eyes but couldn’t. Doctor Ball looked older than his fifty years, his skin pasty and rough. Meke wished that he would sleep a little more and work a little less.

Brody waited outside, his face filled with impatience. Meke set her jaw, quashing the urge to shove the little-minded man. She had seen him shove a six-year-old Zero this morning so hard that she fell, giving herself a nosebleed. Meke looked away, wishing that she could repay him in kind, but knowing she couldn’t.

Sweat beaded on Meke’s forehead after her exercise session. The daily exercise session was a part of the institution’s unyielding routine. After her appointments with Doctor Ball, she would go outside in the courtyard and run around its perimeter for half an hour as a guard watched. After that, she would do pushups and sit-ups to strengthen her body against the sickness that was killing her.

The Box by Harmon, Brian
Mechanical Hearts (Skeleton Key) by Nicole Blanchard, Skeleton Key
Learning Curve by Michael S. Malone
Mojave by Johnny D. Boggs
Elizabeth Chadwick by The Outlaw Knight
Mutation: Parables From The Apocalypse - Dystopian Fiction by Norman Christof
A Love of Her Own by Maggie Brendan
Key of Living Fire (The Sword of the Dragon) by Appleton, Scott
Christmas at Thompson Hall by Anthony Trollope
Breathless by Lurlene Mcdaniel