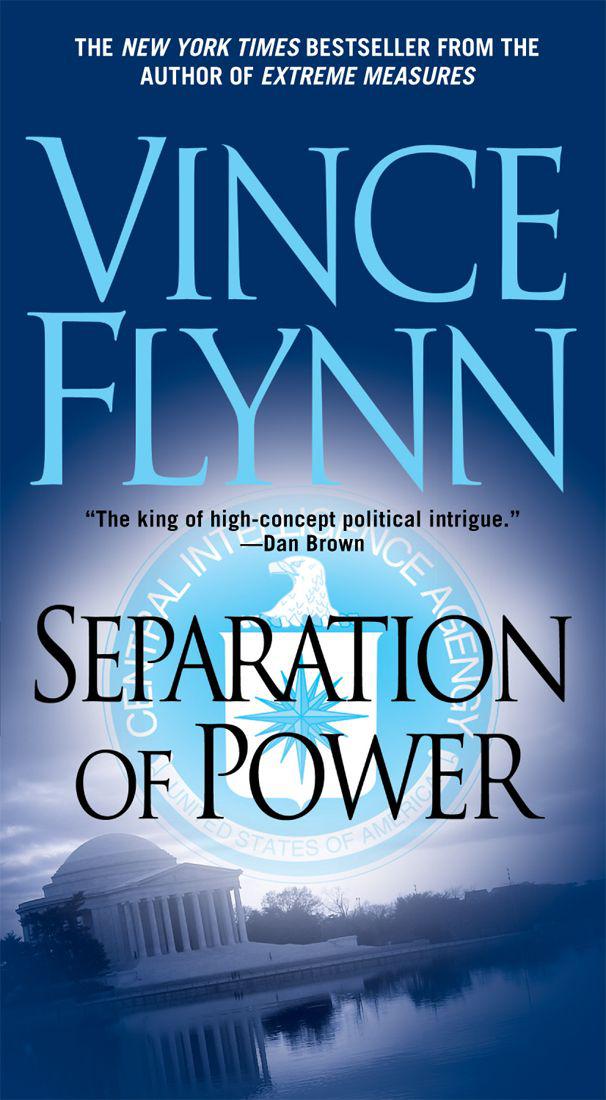 FROM THE DEADLY ALLEYS OF BAGHDAD TO THE CORRUPTION-RIDDLED STREETS OF WASHINGTON, D.C., THE CIA HAS A SECRET WEAPON: MITCH RAPP.

Newly appointed CIA director Dr. Irene Kennedy is the target of an inside plot to destroy her and prematurely end the American president’s term. To make matters worse, Saddam Hussein is close to entering the nuclear arms race—something Israel has vowed to stop. With the haunting specter of World War III looming, the president calls on Mitch Rapp. But with only two weeks to take out the nukes, Rapp is up against a ticking clock—and impossible odds.

“FLYNN DIDN’T INVENT THE POST-9/11 THRILLER, BUT HE MIGHT AS WELL HAVE. . . . THE BEST PURE ADRENALINE-CHARGED ACTION WRITER OUT THERE TODAY.”
—
The Providence Journal
(RI)

MEET THE AUTHORS, WATCH VIDEOS AND MORE AT
SimonandSchuster.com
THE SOURCE FOR READING GROUPS

“THRILLERS DO NOT GET ANY BETTER.”
—Copley News Service

“With action that sizzles and true-to-life insider detail,
Separation of Power
showcases Flynn at his shell-shocking best.”

“Flynn has joined Tom Clancy and Jack Higgins as a master of the political/espionage thriller.”

“Throw in some skullduggery inside the CIA, a lovely female assassin, and Mitch’s angry girlfriend, NBC’s White House reporter, and you’ve got a recipe for a fine thriller.”

“Action-packed, violent, and politically intense. . . . There is hardly any downtime from the action. . . . Truly an entertaining read—even for those not particularly politically inclined.”

“Mitch Rapp is back with a vengeance. . . . There’s nothing better than watching Rapp in fiction knock off the bad guys nobody seems able to get in fact.”

“It cannot be said often enough: Flynn gets it. He understands how the world operates and infuses his characters with a consistent and coherent realism.”

“CIA operative Mitch Rapp is back. And he’s as fearless as ever.”

“A Rambo perfectly suited for the war on terror.”

“Nonstop action [with a] surprising twist.”

“[A] thriller with deadly aim . . . Moves at the speed of a Stinger missile.”

“Flynn has done his homework on military and security matters.”

“Every American should read this book.”

“Flynn [is] a master of the political/espionage thriller.”

All rights reserved, including the right to reproduce this book or portions thereof in any form whatsoever. For information address Atria Books Subsidiary Rights Department, 1230 Avenue of the Americas, New York, NY 10020

ATRIA and colophon are registered trademarks of Simon & Schuster, Inc.

Thank you for purchasing this Atria Books eBook.

D
r. Irene Kennedy stood over the fresh mound of dirt and wept. It had been a small funeral; relatives and a few close friends. The others had already left the windswept cemetery, and were on their way back into town for a light lunch at an aunt’s house. The forty-year-old director of the CIA’s Counterterrorism Center wanted to spend a few moments alone at the grave of her mentor. Kennedy lifted her head and wiped the tears from her eyes as she took in the landscape. She ignored the biting chill of western South Dakota and let it all out. This would be her last chance to grieve so openly for the loss of the man who had taught her so much. After this it was back to Washington, and perhaps the greatest test of her life. During Stansfield’s final days the director of the CIA had told her not to worry. He had made all the proper arrangements. She would take his place as the next director of the Central Intelligence Agency. Kennedy did not relish the confirmation process that awaited her, but what really had her worried was measuring up to her old boss. He was the greatest man she had ever known.

Thomas Stansfield died on a cool fall morning surrounded by his children, grandchildren and Irene Kennedy. It was exactly as he’d wanted it to be. Just two weeks before his eightieth year, he wanted to go no further. Those last few days he had sat in his
leather chair, a calm haze of morphine dulling both his mind and the stabbing pain of the cancer that was ravaging his insides. He stared out the window as the last of fall’s leaves fell. This was the final autumn of his life.