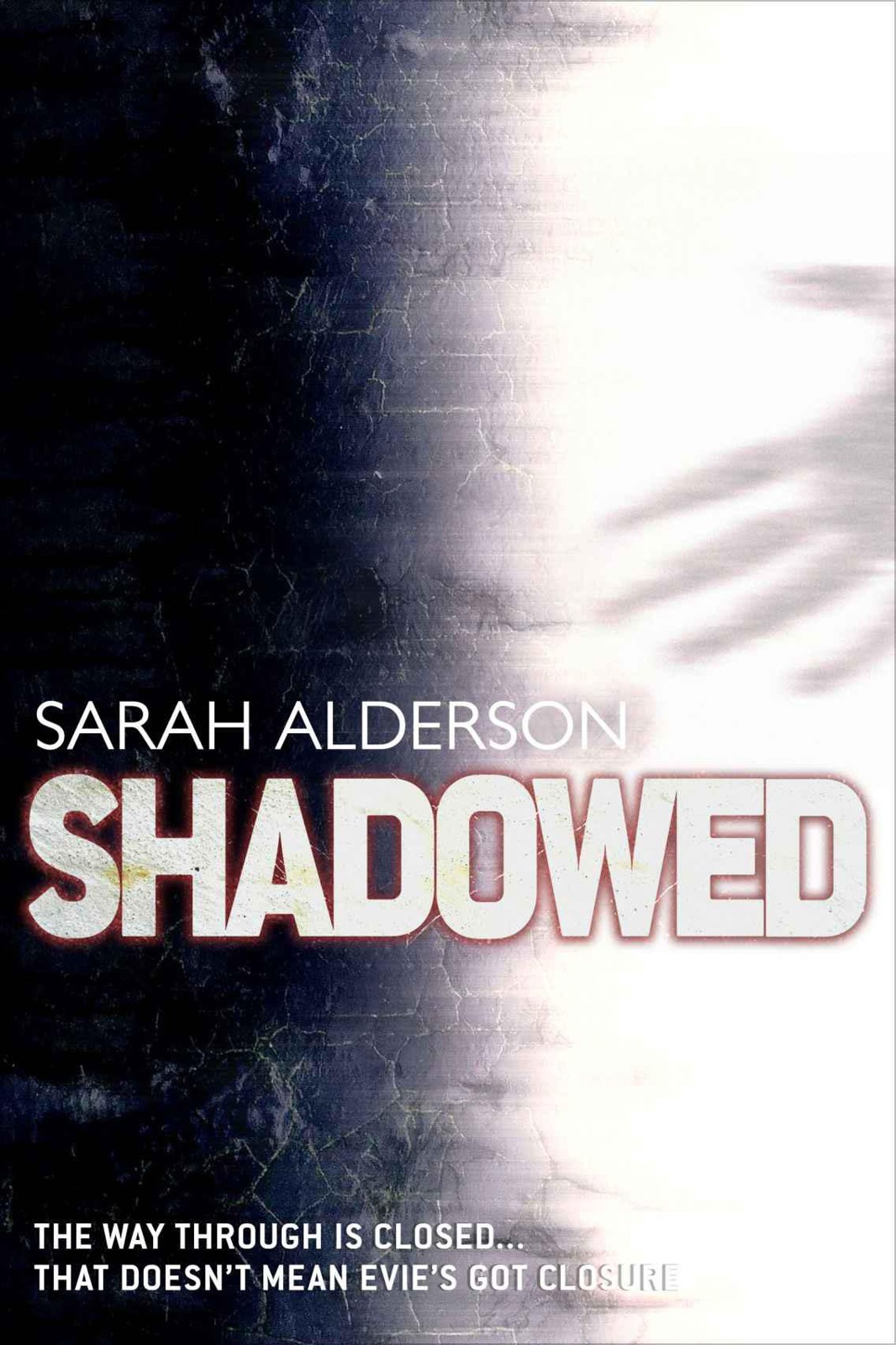 First published in Great Britain in 2013
by Alula Press

This book is copyright under the Berne
Convention.

No reproduction without permission.

The right of Sarah Alderson to be
identified as the author of this work has been asserted by her in accordance
with sections 77 and 78 of the Copyright, Designs and Patents Act, 1988.

This book is a work of fiction. Names,
characters, places and incidents either are the product of the author’s
imagination or are used fictitiously. Any resemblance to actual people living
or dead, events or locales is entirely co-incidental.

There is a crack in everything. That’s how the
light gets in.

More about
the author

‘Would he have become a murderer anyway? Evie?’

Evie turned her head reluctantly away from the
fogged-up window and back to the classroom, suddenly aware of two dozen eyes
burning into her. Someone in the back row was sniggering. Her fingers tightened
instinctively around her pencil, which she was gripping in her fist as though
it was a switchblade.

Mr Fielder, her English teacher, was standing with
his arms crossed over his chest, staring at her. ‘Evie, so nice of you to join
us,’ he said with a tight, sarcastic smile.

The sniggering grew louder. Evie forced her hand to
relax, laying it flat on the desk.

‘I was asking about the three witches,’ Mr Fielder
went on. ‘Did they really foresee Macbeth becoming king? Or did they just plant
the idea in his head? Was it fate, or did he have free will? Would you care to
share your thoughts, Ms Tremain?’

Laughter bubbled in Evie’s chest. She choked it
down, her stomach muscles tensing with the effort, and focused on her hands,
folded on the desk before her – noting how the Mixen acid burns had faded
and now looked like freckles.

The laughter inside her died abruptly, something
more savage taking its place. Before she could think it through she was on her
feet, knocking her chair over and sending the books on the desk behind flying.
She grabbed her bag from the empty seat beside her and strode towards the door.

A hushed awe descended over the room. As she flung
open the door she caught sight of Mr Fielder staring at her, his mouth opening
and closing in mute astonishment, and she noticed too her ex-boyfriend Tom,
sitting in the back row, frowning at her.

Nothing
new there
, she thought
to herself with a sigh before she walked out of the class.

Her pickup truck was parked in the far corner of
the lot. She headed straight for it, tossed her bag onto the passenger seat and
climbed in. Her hand was shaking so hard she couldn’t get the key in the
ignition, and eventually she just gave up and rested her forehead against the
steering wheel instead.

That’s when it began, the sob erupting out of the
centre of her, as if it had been there all along, poised like a vicious dog,
waiting to get her alone. Evie clenched her teeth and tried to fight it, but it
tore free anyway. She thumped the dashboard and tried to get a grip, closing
her eyes and instantly confronting the image branded on the back of her eyelids
of Lucas – lying in her lap, grey eyes dilating black as the blood rushed
out of him in warm, sticky pulses. When would this picture stop being the only
thing she saw every time she closed her eyes?

When Evie finally lifted her head wearily from the
wheel she saw Tom standing in front of the pickup, his bag slung over his
shoulder and his hands thrust into the pockets of his jeans. She glared at him
for a full twenty seconds hoping to convince him to move out of the way. When
he didn’t budge she turned the key in the ignition and let the shriek of the
engine as her foot hit the floor do the encouraging for her.

Tom merely tipped his head to the side and raised
his eyebrows in amusement. The engine started to whine. She took her foot off
the gas and, exhaling loudly, reached over and unlocked the passenger door. She
caught the smile that Tom tried to hide as he strolled around to the passenger
side and climbed in beside her.

‘So,’ Tom said, pushing her bag to the floor and
making himself comfortable, ‘that was an interesting reaction to Shakespeare.
Care to share?’

Evie knotted her hands around the wheel and kept
staring straight ahead. It had started to drizzle. She didn’t care to share. If
she told anyone about what had happened to her in the last three months they’d
commit her to the nearest mental institution.

She could feel Tom looking at her and knew that, if
she turned her head she’d find his brown eyes filled with a mix of three parts
pity, one part frustration. She started to wonder why she’d unlocked the door
and let him in. She should just have driven over him.

‘Evie,’ Tom said, shifting in his seat so that he
was facing her, ‘what’s going on?’

‘Nothing,’ she answered flatly.

His hand came to rest tentatively on her shoulder
and her body reacted instantly by stiffening, her breath catching painfully in
her throat as if she’d swallowed a fishing hook. Tom’s hand fell away. He
sighed loudly and cracked his knuckles – a classic Tom gesture of
frustration.

‘If it’s nothing why were you just crying?’ he
asked.

‘Right,’ said Tom softly. ‘Listen, Evie, I know
something went on with you and that guy Lucas, and you don’t need to tell me
what, but I figure you must have broken up or something because I haven’t seen
him around.’ He hesitated, possibly noting the way her jaw had locked and her
hands turned white-knuckled on the wheel. ‘But like … you know, that happens,’
he said with a small shrug, as if he didn’t get why she was making such a big
deal about it. She noticed the barely hidden tone of recrimination as he added,
‘I don’t remember you being the same way when we broke up.’

Evie shook her head at him in amazement. ‘You
cheated on me with my best friend and, if I recall correctly, I didn’t talk to
you for six months afterwards. And I’m starting to wonder why in fact I ever
did start talking to you again.’

‘OK, OK!’ Tom said, holding both hands up in
surrender. ‘You’re right. I’m sorry. I just … I don’t understand, is all. I’ve
seen you angry, Evie. Hell, I’ve been on the receiving end enough times. And
I’ve seen you hurt too. But I’ve never seen you like this. I’m worried about
you.’ He paused a beat. ‘We all are.’

‘We?’ she asked, laughing under her breath. People
were gossiping about her, she knew that much. They definitely weren’t worrying
about her.

Tom looked away. ‘Well, you know what I mean,’ he
mumbled.

She didn’t, but she kept quiet.

‘You’re going to flunk all your classes at this
rate. I don’t know what happened between you and this guy but is it worth
throwing away your future because of it?’

Evie’s eyes narrowed into slits. ‘Have you been
talking to my mother by any chance? Because it sure sounds like it.’

‘No!’ he said, flinching back in his seat. But the
way he said it – the slight fluctuation in his tone, the fact that he
still wouldn’t meet her eye – told her that he had, without a doubt, been
talking to her mother.

‘Look, if I want a lecture about my future,’ she
said through gritted teeth, ‘I’ll go and see the school guidance counsellor.’

‘Well, maybe you should,’ Tom shot back.

Evie’s mouth fell open. ‘What are you saying?’

Tom shrugged. ‘Nothing. But maybe it’s not such a
stupid idea. If you won’t talk to me and you won’t talk to your mum, then maybe
you should talk to the school guidance counsellor. That’s what she’s there
for.’

Evie almost laughed out loud. ‘Tom,’ she said,
feeling tears burning the back of her eyes, ‘it’s not that easy. I wish it was.
Believe me.’

His hand was suddenly there again, on her shoulder,
his fingertips brushing the nape of her neck. And she froze. Her spine went
rigid and her throat constricted as though he was strangling her.

She needed to be alone. She couldn’t handle anyone
prying. She couldn’t stand anyone being nice to her. Not now. Not after
everything that had happened.

Tom fell back in his seat but he didn’t try to
argue – he just fumbled with the door handle and jumped out of the car.

‘You know,’ he said, the drizzle coating him in
seconds, dampening his hair across his forehead, ‘for the record, I think it’s
free will.’

She shot him a confused look, her foot already on
the gas, the engine straining against the handbrake.

‘It’s free will, not pre-destiny,’ he repeated.
‘Macbeth chose his destiny – he chose to kill the king. The witches
didn’t foretell it. They planted the idea in his head but he still chose to
kill the king. You could choose too, you know.’

‘No. To not be such a victim. Why do you care so
much about a guy who didn’t even deserve you?’