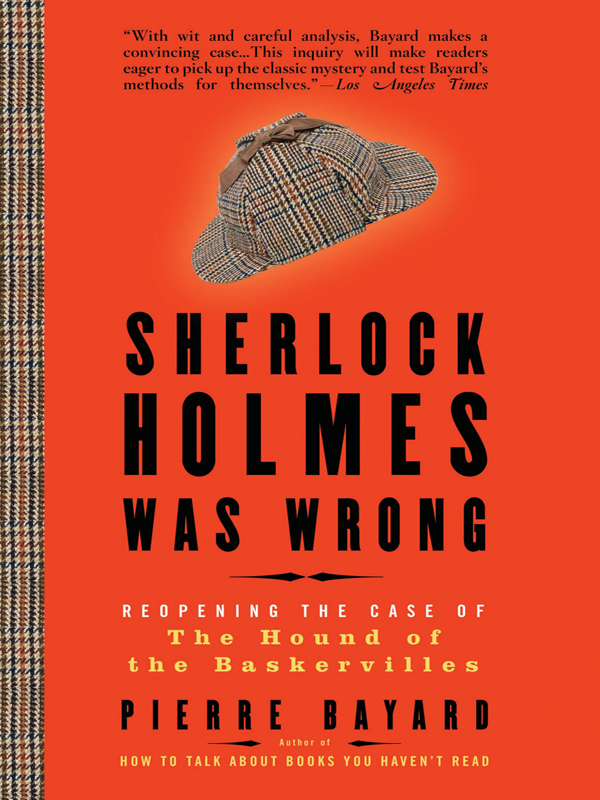 How to Talk About Books You Haven’t Read

Reopening the Case of

The Hound of the Baskervilles

Translated from the French

All rights reserved. No part of this book may be used or reproduced in any manner whatsoever without written permission from
the publisher except in the case of brief quotations embodied in critical articles or reviews.

All papers used by Bloomsbury USA are natural, recyclable products made from wood grown in well-managed forests. The manufacturing
processes conform to the environmental regulations of the country of origin.

Sherlock Holmes was wrong: reopening the case of the

from the French by Charlotte Mandell.—1st U.S. ed.

First published in the United States by Bloomsbury USA in 2008

This paperback edition published in 2009

Printed in the United States of America by Quebecor World Fairfield

The barriers between reality and fiction are softer than we think; a bit like a frozen lake. Hundreds of people can walk across
it, but then one evening a thin spot develops and someone falls through; the hole is frozen over by the following morning.

II. On the Moor

IV. The Principle of Incompleteness

I. What Is Detective Criticism?

III. In Defense of the Dog

I. Does Sherlock Holmes Exist?

II. The Immigrants to the Text

III. The Emigrants from the Text

I. Murder by Literature

IV. And Nothing but the Truth

The Hound of the Baskervilles

Sherlock Holmes:
English detective. Believed to be dead after his disappearance in the Reichenbach Falls, in Switzerland, he is resurrected
by Conan Doyle, eight years later, in
The Hound of the Baskervilles
.

Dr. Watson:
friend and colleague of the detective.

Sir Charles Baskerville:
owner of the manor house that bears his name. Dies under mysterious circumstances just before the beginning of the novel.

Dr. James Mortimer:
friend of the Baskervilles. Travels to London at the beginning of the novel to ask Sherlock Holmes to investigate Sir Charles
Baskerville’s death; he thinks the police brought their investigation to a close too quickly.

Jack Stapleton:
naturalist living near Baskerville Hall. Sherlock Holmes discovers that he belongs to the Baskerville family and suspects
him of being Charles’s murderer.

Beryl Stapleton:
wife of Jack Stapleton. He passes her off as his sister.

Eliza Barrymore:
wife of John Barrymore and sister of Selden.

Frankland:
bitter old man who lives on the moor and constantly sues his neighbors. Father of Laura Lyons, from whom he is estranged.

Laura Lyons:
daughter of Frankland and mistress of Staple-ton. Lives alone on the moor.

The hound:
watchdog. Accused by Sherlock Holmes of two murders and one attempted murder.

FROM THE CHAMBER where she has been locked for hours, the young woman hears shouts and laughter rising from the great dining
hall below. As the evening advances and talk becomes more heated under the influence of alcohol, her anxiety mounts at the
thought of the fate intended for her by the men she can hear carousing below. First among them, worst of them all, is the
leader of the gang, Hugo Baskerville, corrupt owner of the manor house that bears his name.

For months Hugo had been hovering around the young country lass, whom he had tried to attract by every possible means, first
by trying to seduce her, then by offering her father large sums of money if he would agree to further their relationship.
But she found him vile, repulsive; she kept avoiding him. So Hugo and his men, on this Michaelmas, have resorted to violence.
While the girl’s father and brothers have been away, the have kidnapped her and brought her to Baskerville Hall.

When the bedroom door had first closed behind her, the girl had stayed motionless for a while, paralyzed by emotion. Now,
overcoming her fear, she comes to herself and begins looking for a way to escape. First she tries to force the lock, but she
soon abandons the idea. Made of metal and set into a massive oak door, it would be impervious to her blows.

A quick look around the room reveals that aside from an inaccessible chimney flue there is only one available opening: a little
window, just large enough for a slender person to climb through. But leaning out, she sees that the ground is far below; jumping
would mean breaking a limb, even killing herself.

But this opening is the only one that lets the prisoner entertain a faint hope—provided she can show some nimbleness, and
is willing to risk her life on one stroke of luck. There is ivy climbing the front of the house from the ground to the roof,
and so she resolves, daring everything, to stretch out her arm, grab hold of it, and begin a perilous descent.

Having finally reached the ground, the young woman ignores her scratches and at once starts running away from the Hall and
toward her father’s house, whose lights three leagues across the moor she can more intuit than glimpse.

Despite her pain and anguish, her hope begins to rekindle as she gets farther from her prison. She fights off the terror of
the darkness and the eerie noises from the moor, a world inhabited by supernatural creatures, in this era not yet civilized
by science.

These indistinct noises are soon dominated by a stronger, more regular sound approaching quickly. The origin is easy to recognize.
It is a horse galloping along the path at top speed, urged on with shouts by its rider, and there can be no doubt about its
target.

But whoever attentively lends his ear to the sounds of the moor will hear even worse. More terrifying than the noise of galloping
hooves is the howling of a pack of dogs, the barking closer and closer, as if they were outrunning the horse and had already
left it far behind.

The young woman realizes now that her jailer has found her missing and is in hot pursuit. But he wasn’t content to ride after
her. He also set the pack of hounds that he uses for hunting on her trail, probably after having them sniff a piece of clothing
of the prisoner who is now their quarry.

Dropping from fatigue, dying of fright, the young woman has no choice but to abandon the path and hurl herself into a broad
ravine, a
goyal
, marked long ago by the inhabitants of the place with two tall stones. She knows she has no chance of escaping her kidnapper;
all she can do is gain a few minutes’ respite before she is discovered and torn apart by the hounds.

Crouching low to the ground and trying to catch her breath, she waits for the inevitable end, making her last resigned prayers.
The end is not long in coming. Hugo Baskerville jumps down from his horse, not even taking the time to tie it to a tree, and
bounds into the goyal.

But the pursuer does not look like the formidable man she was fearfully expecting to see leap from the shadows. His face is
deformed not with the fury of the hunter who has allowed his prey to escape, but with a nameless terror. Hugo Baskerville,
like his victim, is now reduced to the status of prey.

Behind him rises up the monstrous form of a giant black dog, so huge it defies imagining. With its bloodshot eyes, it seems
to have come straight out of hell to the edge of the goyal. With a giant leap, it hurls itself onto Hugo, who rolls on the
ground, shouting with horror. His shout is stifled in his throat at once as the monster sets his fangs into it, and the young
man quickly loses consciousness.

Stunned by the sight, her nerves spent, the young woman collapses and dies of exhaustion and fear, so that when Hugo’s companions
reach the edge of the goyal there are two corpses for them to discover. So shocking is the spectacle that some of them—it
would be said in the neighboring villages—die of fear and others go mad ever after.

What is the girl thinking about as she is dying? Although the texts that have come down to us remain silent on this point,
we are not forbidden to use our imaginations. The thoughts of characters in literature are not forever locked up inside their
creators. More alive than many living people, these characters spread themselves through those who read their authors’ work,
they impregnate the books that tell their tales, they cross centuries in search of a benevolent listener.

This is true for the young woman whose final moments at the bottom of a goyal on the Devonshire moor I have just related.
Her last thoughts carry an encoded message, a message without which Sir Arthur Conan Doyle’s most famous work remains incomprehensible.
It is to reconstruct these thoughts and their secret effects on the plot that this book has been undertaken—for this, and
for the dead girl’s memory.

To understand what she had to tell us, I have taken up in minute detail an investigation into the murders blamed on the Hound
of the Baskervilles. In so doing, I have made a number of discoveries that, piece by piece, go far to cast doubt on the official
verdict. After examining a series of convergent clues, I feel there is every reason to suppose that the generally acknowledged
solution of the atrocious crimes that bloodied the Devonshire moors simply does not hold up, and that the real murderer escaped
justice.

How could Conan Doyle be so mistaken about this? Faced with such a complex enigma, he probably lacked the tools of contemporary
thought on the topic of literary characters. These characters are not, as we too often believe, creatures who exist only on
paper, but living beings who lead an autonomous existence—sometimes going so far as to commit murders unbeknownst to the author.
Failing to grasp his characters’ independence, Conan Doyle did not realize that one of them had entirely escaped his control
and was amusing himself by misleading his detective.

By undertaking a theoretical reflection on the nature of literary characters, their unsuspected abilities, and the rights
they are entitled to claim, this book intends to reopen the file of
The Hound of the Baskervilles
and finally to solve Sherlock Holmes’s incomplete investigation—and in so doing, to allow the young girl who died on bleak
Dartmoor and has wandered for centuries since in one of those in-between worlds that surround literature, to find her rest
at last.
*

* All my thanks to François Hoff, eminent Sherlock Holmes specialist, for reading this manuscript so carefully and for giving
me some useful suggestions.