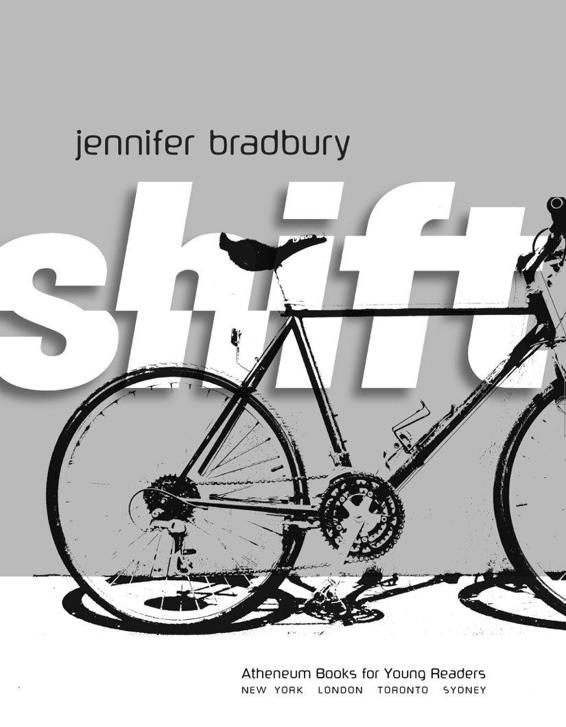 The text for this book is set in Meridien.

Summary: When best friends Chris and Win go on a cross-country bicycle trek the summer after graduating and only one returns, the FBI wants to know what happened.

For Jimmy—
always my first,
best,
and favorite reader

Shift’s journey has been as challenging and eventful as the one reflected in the story. Like my characters, I’m lucky I didn’t have to go it alone. To all the brave travelers who read early (or multiple) drafts of the story, I owe a debt greater than I can repay. Thanks to Troy and Angie Wright, Kyle and Christy Johnson, Joe Vellegas, Jenny Black, Jana and Derry Billingsley, Jules Hargan, Todd Reynolds, Monica and Alex Adkins, June Bradbury, Maryann and Jerry Faughn, Tom Samples, and Andrew and Becky Campbell for pedaling through the uphill climb of the early versions. Thanks to my ninth-grade classes at Burlington-Edison High School for their insightful comments during writing workshops—you’ve been the best writing teachers and guides I could ask for. Thanks to Bhavan Vidyalya in Chandigarh, India, for providing me space to work (and to Aryan and Vashundara for the welcome distractions). Thanks to Cathy Belben and Laural Ringler for inviting me into the writing life and proving great companions on the journey. Thanks to Robin Rue and the folks at Writers House for their faith and enthusiasm in the story—you showed up at just the right moment. Thanks to Caitlyn Dlouhy, whose vision and insight forced me to find new gears as a writer and, ultimately, made the story what it is now. And although you have no idea what you did, thanks to Evie June for the long afternoon naps and for reminding me what really matters. Finally, to Jimmy for sharing your stories and filling our life with so many. Any journey with you is richer for it—especially this one.

The nose of the seat bit into my shoulder as the toe clip scraped the back of my thigh. I wrestled the bike through the dorm’s gaping front doors, the derailleur cable snagging on the knob as I stepped inside. I lurched, swore, and hoped none of the half-dozen people hanging around the sweltering lobby were watching. I tried to block out the lingering smells of puke and cheap beer as I headed for the row of mailboxes along the far wall.

Through the glass of box number 118, I saw a small scrap of green paper. As I fumbled in my pocket for my box key, the bike slipped off my shoulder and crashed to the tile floor. I swore again, let the bike lay where it fell, and pulled the message out of the mailbox.

I
had
to start carrying my cell phone. Mom had probably left a couple of messages on it already. She was pretty thorough when she got panicky, and lately she panicked a lot. Part of it was her having a hard time letting go. The other part had more to do with what happened this summer. Still, I couldn’t imagine what qualified as urgent these days with her. Had she found another one of my socks in the dryer?

The desk phone rang. Behind the counter another freshman who’d fared better in the work-study lottery than I had answered while managing to keep his gaze on the TV blaring from across the mock living room, a mixture of sweaty tile, cast-off couches, and giant floor fans that had to have been around since the eighties.

“Armstrong Hall,” he mumbled as I shut the mailbox, shoved the message and key into my pocket, and heaved my bike back onto my shoulder. But then a voice too close made me jump.

“I hear those things are a lot easier if you ride them instead of letting them ride you,” said a man in a dark suit as he gestured toward the bike.

I nodded, looked the guy over. “Chain busted on the way back from the square,” I said, wondering why this guy had decided I looked like I was in a mood for conversation. The tie meant he was probably someone’s dad.

I shrugged, causing the bike to slip again, the back wheel banging into the mailboxes. The whole cycling-around-campus thing hadn’t turned out to be as cool as I’d imagined. People in the way. Speed bumps. Crowded sidewalks. Stairs.

I missed the road.

“Nice talking to you,” I said, taking a step toward the hallway.

“You’re Christopher Collins.” No hint of a question in his voice.

I answered anyway, taking another look at him as I did so. He must have been at least six feet tall, because I could look him straight in the eyes without slouching, but he had me by forty pounds, easy. Not that that was surprising. I’d been the skinny kid since second grade.

“Must have a lot of miles on that thing,” he said, pointing toward the chain dangling from the front crank. “They don’t wear out fast, do they?”

My legs began to itch from the inside out. For as long as I can remember, the itching has been an early warning indicator. Anytime I have that feeling, I know something big is on the horizon. The sensation is as reliable as the smell of rain before a storm. “Who are you?” I asked.

“Abe Ward,” he said, reaching into his breast pocket. The gesture allowed the flap of his jacket to fall open, revealing a slick-looking pistol holstered just above his belt. “I’m with the FBI, based here in Atlanta. Mind if I ask you a few questions?” He pulled his hand out of his pocket and flipped open an ID badge
with a practiced motion. His voice was even, measured, his forehead dry even in the oppressive heat.

Anytime somebody wants to ask me a few questions, my natural suspicions come into play. But when that person has a gun and flashes an official-looking piece of government ID, I can only say one thing.

“Shoot.” I dropped the bike to the floor and leaned it against the wall.

He ignored my question, gesturing toward a couch in a quieter corner of the room. “This okay with you?”

I nodded. “Sure.” My roommate, Jati, was an international student from Malaysia. If I brought a guy in a suit with a government ID into the room, he’d probably think someone was coming to revoke his visa.

Ward sat. I sank into a chair across from him. A scarred coffee table littered with old copies of alumni magazines and the student newspaper—the
Technique
—filled the space between us. “You probably know what this is about,” he began. Something about the way my legs were itching said I did, but the message hadn’t quite reached my brain. I shook my head lamely. Maybe spending the last few days playing getting-to-know-you games and talking about the evils of binge drinking had made me stupid.

I tossed my head back against the couch. Great. “Mr. Coggans sent you,” I said.

“Answer the question, please,” he replied.

I sighed. I wasn’t eager to jump back into the events I’d been recounting to Win’s parents and mine since I returned without him two weeks ago. I thought once I got to school, I might get a break. Apparently not. “No. Not since I finished the trip—well, sort of finished the trip—with him a couple of weeks ago. We got separated at the end, and I couldn’t find him. So I rode to the coast, got on a bus, and came home. Showed up here for orientation a week after that.”

“Why didn’t you look for him after you reached the coast?” the agent asked.

Besides the fact that he didn’t bother looking for me
? I thought. “I figured he’d gone on to his uncle’s in Seattle.” Truth was, I was still pissed at him for not stopping when I got that flat near Concrete, Washington, a dead little town fifty miles from the coast.

“Why didn’t you go to Seattle?”

“Win never told me the address. Or the phone number. Or even his uncle’s name,” I said.

Ward pressed on. “But I’m sure there were other ways you could have gotten the information—”

“Probably. But I was a little tired of it all by then,” I said.

“Tired of what?” he asked, his voice inching from the friendly tone he’d opened with to something more businesslike.

“Win’s always playing games. I was sick of him. Getting to Seattle would have been too much of a hassle.”

“Doesn’t seem like a guy who’d ridden his bike across the
country would have minded. What can it be, an eighty-mile ride?”

“That’s a whole day of riding, and probably more since I’d have been on back roads. We only rode freeways when we had to.”

“Didn’t the bus stop in Seattle before it turned back east?” he asked.

I nodded. “For maybe half an hour.”

He paused, scratched the back of his head. “Why didn’t you call Win’s parents when you split up?”

I shrugged. “I was in the middle of nowhere. And Win had the cell phone. But that was dead by then. Besides, it didn’t seem right that since Win decided to ride on his own, I should be the one to catch hell for it.”

“What’s going on with Win?” I’d been telling myself for the last week that he must have turned up, since his dad had stopped making his daily phone calls. It dawned on me that if the FBI was involved, then that could mean a lot of things … few of them good for Win … or me.

Again he ignored my question. “But you could have called them to get the uncle’s address.”

I hesitated. Since middle school I’d avoided conversations with Win’s parents almost as carefully as Win did himself, but I didn’t want to go into all that. “Seattle’s a pretty big place. Why won’t you tell me what’s going on?”

The agent stared at me a little longer; I tried to stare back, was reminded of the stupid contests Win and I used to engage in, and looked away.

Ward began to loosen his tie, as if he knew we might be here awhile. “Do you want to try that again?”

“It’s the truth,” I said, sounding more panicked than I wanted to.

I was taken aback.

“You’re kidding, right? Why would I lie?” I couldn’t remember the last time someone had accused me of lying.

He glared at me again. I wonder if the feds provide training for intimidating stares at the FBI academy. Or maybe it’s a prerequisite—like running a six-minute mile. His gaze made me so uncomfortable that I began to doubt my own story.

“I told the exact same thing to my folks when I got on the bus to come back,” I said.

“Yeah. I talked with them earlier today.”

He’d talked to my parents? “So then you know I’m telling the truth, right?”

Ward snorted. “Nope. I only know that you lie consistently. This isn’t high school PE—a note from your mommy isn’t going to get you out of climbing the rope.”

“What exactly is ‘this’?” I asked, almost as annoyed by another mama’s-boy reference as I was freaked by the appearance of an FBI agent asking me questions about something I’d been trying pretty damn hard to forget.