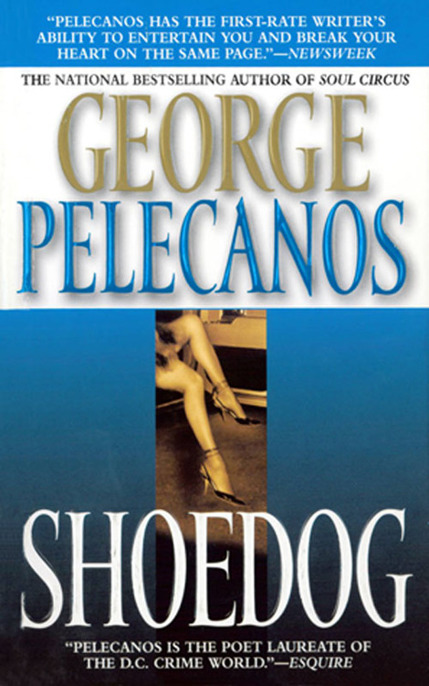 This is a work of fiction. Names, characters, places, and incidents either are the product of the author’s imagination or are used fictitiously. Any resemblance to events or persons, living or dead, is entirely coincidental.

Excerpt from
Drama City
copyright © 2004 by George Pelecanos All rights reserved. No part of this book may be reproduced in any form or by any electronic or mechanical means, including information storage and retrieval systems, without permission in writing from the publisher, except by a reviewer who may quote brief passages in a review.

Visit our Web site at
hachettebookgroupusa.com

Look for the Novels of George Pelecanos

Praise For
Shoedog
and George Pelecanos

A Preview of
Drama City

“Mr. Pelecanos’s uniqueness comes from his bravery in ignoring the concept of cool. Unlike many of today’s chroniclers of streetwise behavior, he’s not afraid to put heart and humanity into his mix, and it pays off in reader involvement….Pelecanos’s prose is distinguished not only by the human protagonists but also by the humanity he finds in even the basest of his bad men.”

PRAISE FOR
SHOEDOG
AND GEORGE PELECANOS

“Slangy, hip … one of the very best young mystery writers….Pelecanos is the spikiest … and most menacing.”

“Pelecanos aims straight and truly into the abyss with his noirish
SHOEDOG.
”

“One of the best crime novelists alive, George Pelecanos is an American original.”

“An exceptional, memorable book from a fine writer.”

“Pelecanos’s characters are so alive you expect to see them in the next room.”

“SHOEDOG
is one of the best examples of noir I’ve come across in a long while … ranking right up there alongside the works of Jim Thompson and Cornell Woolrich.”

“The ending left me reeling. Fans of hardboiled fiction are well advised to check this out.”

“Pelecanos has brought elegant plotting, lean writing, a keen ear, and an attentive heart to the task of chronicling the sociocultural upheavals of his hometown….Pelecanos has pared down his narrative style to such a clean, hard edge that you’re afraid it might cut you if you get too close.”

“George Pelecanos’s novels delve into the heart of contemporary urban society…. He brings a filmmaker’s eye for detail to his novels.”

“The word among writers and those in the know has long been ‘Read Pelecanos.’”

“Pelecanos’s characters leap off the pages and into your heart and mind.”

“Pelecanos has created a fictional world of characters that are as real as the streets they walk on.”

Down By the River Where the Dead Men Go

T
HE
first thing Constantine noticed, as the car pulled over and slowed to a stop, was the bumblebee emblem on the grille. The car had been repainted, twice at least, and the paint now covered the stripes and graphics that had originally wrapped the rear quarter panels and trunk. Constantine listened to the big engine idle, checked the dual scoops on the hood. Stripes or no, this was a ‘69 Super Bee. He had not seen one of those on the road since high school.

The second thing he noticed was the guy driving the car. From what Constantine could make out, a gray flattop and below that a creased forehead barely clearing the top of the wheel, the guy looked small and a little old to be driving a sixties muscle car.

The car appeared to be sound, though, and a ride was always just a ride. Constantine dropped his thumb and lifted the padded strap of his Jansport pack, easing it onto his shoulder, and walked toward the Dodge that was stopped on the berm. He bent forward and leaned his forearm on the lip of the open passenger window.

“Thanks for stopping,” Constantine said.

Constantine tossed his pack on the backseat and dropped into the passenger seat, shutting the door. The old man threw the Hurst shifter into first, gave the Dodge some gas. The car spit gravel, moved off the shoulder, and accelerated onto the two-lane.

They drove northwest on 260, the interstate densely lined by oak and scrub pine, broken occasionally by odd, isolated residences, sprawling ramblers of brick and stone. The radio was off, but the old man was moving his head rhythmically, a slight, childish smile on his face as he pointed at the low, white-flowering trees that dotted the interior of the woods.

“Wild dogwoods,” he said, turning his head briefly to Constantine. The old man’s eyes looked blue as the spring sky, his smile broad and genuine, though it was not a smile to cause worry. Constantine looked at the eyes and the tough hands grasping the wheel, and decided at once that these were not the eyes or the hands of a chicken hawk. “Maryland’s beautiful this time of year. Beautiful.”

Constantine nodded. “Today was a nice one. I was down at Chesapeake Beach this morning, looking out at the bay.” He had sat there on a bench, in fact, for several hours, staring out at the sun-whitened water, the bay at that point expansive as the ocean.

“You from down this way?” the old man said.

“Where you coming from?”

Constantine stretched his legs, watched the trees blur by. “I was in Annapolis for a couple of days. Had a line on a job there.”

“What kind of work?”

“Driving a man around town. A man who had money. A little bit of caretaking, too. That sort of thing.”

“A driver, huh?” The old man looked Constantine over, then returned his eyes to the road. “Didn’t work out?”

Constantine checked the old man’s windbreaker, his worn Wranglers. “Let’s just say the guy wore pants with whales on ’em, wore his sweaters tied around his neck. The old-money-and-marina crowd. It wasn’t my stick.” He sighed, squinted, and drummed the dash with his fingers. “Hitched out of Annapolis this morning, ended up in Chesapeake. I picked up a map there and saw that I was headed into a dead end. Here I am, looking to get out.”

The old man took one hand off the wheel and stretched it to the right. Constantine shook it.

“I knew a Constantine once. A Greek.”

Polk kept on: “Course Ms own people never called him Constantine. They called him Dean, some of ’em called him Dino. But I always called him Connie, and he didn’t seem to mind. You don’t mind if I call you Connie, do you?”

Polk barked a cough into his hand, then rubbed phlegm off along the leg of his Wranglers. “You wouldn’t happen to have a smoke on you, would you, Connie?”

Constantine reached into the breast pocket of his denim shirt and retrieved a thin pack. He pulled out a Marlboro, handed it to Polk, and crushed the empty pack in his fist.

Polk waved. “I don’t want to take your last one.”

Polk shrugged and flipped the filter between his teeth as he pushed the lighter into the dash. The lighter popped half a minute later and Polk fired the smoke. “You like the car?” he said.

“It’s not the quickest one Dodge made. They had a six-pack version that year—”

“I know. Four-forty Magnum V-eight with three Holley carbs. The big scoop on the hood, though, it attracted too much heat. Anyway, this three eighty-three—it’ll do.”

“That it will.” Polk gave Constantine an admiring glance. He dragged deeply on the cigarette and said through the exhale, “So, where you headed?”

Polk chuckled. “South’s a direction, son. I mean, where you
headed?”

For a minute or so there was only the sound of the big engine, and the wind jetting into the car. Polk tried again: “I didn’t mean to pry. But the reason I was asking, see, it happens that I’m heading south as well. Florida to be exact. Thought maybe we’d head that way together.”

Constantine looked over at Polk. The old man talked too damned much, but he was all right. Constantine liked him a little bit; at least he liked him enough to share the ride. “That would be good,” he said, pushing his hair behind his ear, settling into the bench seat.

Later, when Constantine walked toward the big brick house, the Beat in his head, the grip of the .45 warm in his hand, the siren wailing in the night at his back, he would think that the whole thing started on that road, with the car stopping for his upturned thumb. He would think that the things that happened to a man were put in motion by something just that small, that random. He would think about that, and he would laugh. But he would keep walking.

“I’ve got to make one stop, Connie,” Polk said, “just above Dunkirk. A man there owes me some dough, and I want to collect Okay?”

Constantine nodded lazily and closed his eyes. He was listening to the purr of the 383, and thinking of the fine free feel of the wind.

S
OMEWHERE
north of Dunkirk Polk turned off Route 4 and drove down a two-lane blacktop heavily wooded on both sides. The woods broke on the right to an open field bordered by a split rail fence. Constantine noticed a stable with one black horse grazing just outside its entrance. The field ended and then there were more woods, though the fence continued along the road. After a while the woods ended again to another stretch of open land, where a large brick colonial sat back a hundred yards at the end of a long asphalt drive. Polk slowed the Dodge and pulled off, stopping in front of a black iron gate bookended by two brick columns. He killed the engine and turned to Constantine.

“This shouldn’t take long,” Polk said. “Want to get out?”

They opened the doors and exited the car. Constantine unzipped his jeans and urinated into the gravel of the berm, watching Polk walk toward the gate. The old man had a deep limp, and Constantine noticed the creased toe area of his left shoe. It flapped sloppily with each step, as if it had been filled with something less substantial than bones and flesh. Constantine zipped his fly, adjusted his denim shirt, and walked onto the asphalt drive where he joined Polk at the gate.

Polk pressed a buzzer set beneath a speaker on the left brick column, keeping his eyes on the house. Constantine noticed a broad figure move into the frame of the wide second-story window that was centered above the front door and its stone portico. The figure held a pair of binoculars to its face, then disappeared. Some time passed and then a voice came from the box above the buzzer.