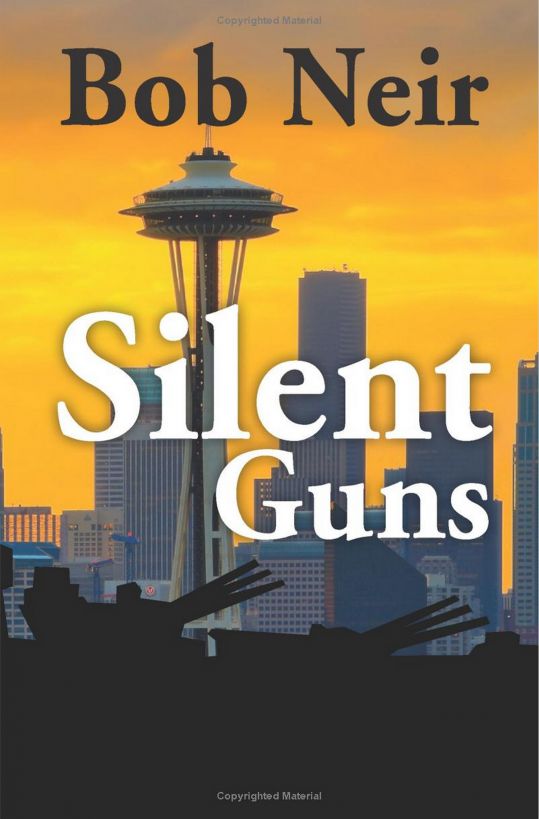 SILENT GUNS is a must read for those who love the
sea, intrigue and fast-moving action. To Navy old-timers, a way of
life, almost forgotten, is re-lived by characters who shared
similar experiences. The United States Navy and the City of Seattle
find themselves challenged. The tale itself is of pure fiction, the
invention of this author. The story is anchored in the Puget Sound
region in many recognizable places and locations.

Fortunately, none of the events ever transpired and
the author trusts they never will.

I offer many thanks to Captain Karl R. Baldessari,
D13 Chief, U.S. Coast Guard, Seattle, who set me straight on
helicopter operations; Rear-Admiral Jack Baldwin (retired), for
coaching me regarding ship-handling and Navy matters; and, Captain
Wendell Schneider, (retired), of the Alaska trade, who served as my
role model for Captain Larsen and his treasury of sea stories.

A nick. Just a small nick in the West Coast of
Vancouver Island, British Columbia, defined the cove. Small boaters
scampered to safety behind its hook-like jetty of black rocks.
Eighty-mile an hour winds, driven unimpeded over six thousand miles
of open Pacific Ocean, curled up 60-foot waves of mayhem.
Surprisingly, inside the cove the water surface held a perpetual
state of flat calm. On the jetty’s outermost high point, a
prominent stone cairn was posted. Today, a gale signal flag flew
atop as an advisory. Small craft scurried in, chased by angry
driven winds beneath laden black clouds, through a narrow rockbound
entry passageway. The cove, itself, had no name, but Harry’s store
stood on an embankment at the top of a worn pathway that traveled
down to a small service dock.

So the cove came to be known as Harry’s Cove.

Few managed to eke out a living in Harry’s Cove. It
lacked flat ground and had no landside access save a small, dry
creek bed that casually meandered down a severely eroded ravine. At
the foot of the ravine, where local natives laid claim, the terrain
was littered with mended fishing nets hung out to dry. Harry made a
living off his fuel barge and meager stores. His livelihood
depended on the small cluster of boats now dashing in before the
storm. Fishermen and seasonal boaters heading north to Alaskan
waters had no choice but to pass Harry’s Cove.

Four men sat on benches at a lone wooden table
playing cards and drinking Harry’s gut-wrenching coffee. One of
them was a man of middle height, stocky with graying hair touching
his temples. He stared out from under dark eyebrows at a taller
slender man, with a deceivingly muscular build, sitting alone at
Harry’s four-seat counter. He watched him fiddle with his coffee
cup, slip his index finger around the edge and gaze nowhere. A
sharp gust rattled the front door against its hinges. Ducking a
violent blast of artic chill, the man cocked his head slightly. The
shorter man straightened up, dropped his cards and got up. He was
certain.

Taking the stool next to the taller man he said, “I
thought you were dead.” He was ignored. “It’s been ten years; but I
never forget a face. You’re Anthony Trent.” The man flinched ever
so slightly but covered by reaching for the sugar bowl.

“
That was quite a stunt you
pulled. You almost got away with it,” the shorter man
persisted.

“
I don’t know what you’re talking
about.”

“
In my thirty-year police career,
two cases were never closed. Yours is one of them.”

“
You seem pretty damn sure of
yourself.”

“
I have a photographic memory, you
see. Your picture was in your Navy file. Yes! You are definitely
Anthony Trent.”

“
Sam Simons, Chief of Police of
Seattle, retired these many nine years,” he replied, surveying the
taller man.

“
Suppose I were this Trent guy.
What’s it to you?”

Simons leaned his elbows on the counter and paused.
He sensed a snap of a finger and this man could be gone, get up and
walk out. Find him again? Unlikely. Not on rugged, sparsely settled
Vancouver Island. And, why should he bother? Hell. He was retired.
Why even care? Yet, Trent had made a fool of him. Between them, the
chase was most likely a draw; but Trent couldn’t know that. The
taller man sat unmoved.

“
Suppose I make you a proposition?
If you are Trent, how about satisfying my curiosity? There are
things I need to know.”

“
So, you’re after some kind of
justice?”

“
If I were this Trent guy, why
should I trust you?”

“
What Trent doesn’t know, is that
if it hadn’t been for me, he wouldn’t be alive today,” Simons swung
to the taller man, “I let him escape.” The man made no reply. A
torrent of incessant rain pounded the cedar-shingled roof. It
startled Harry as a gust pummeled his store. Window frames creaked,
shelved glassware clinked and a beer sign hanging on the
wall-tilted grotesquely.

A fisherman yelled, “Hey! Sam. Get over here. We
need a fourth.”

“
Just neighbors, retired. We make
this trip every year.”

“
I guessed as much,” replied the
taller man. “Or, maybe they’re cops and you’re not sure of
yourself.”

The taller man turned full-face on and scrutinized
the smaller man for a full minute. He then said, “Deal.”

“
How did you end up in this place?
Simons eased up.

“
We tried to land the helicopter.
The pilots tried, but the blade caught a wave top and we rode it
in. All sorts of debris shot to the surface. I grabbed a raft,
climbed in and collapsed. I didn’t come out of it until the next
morning. By then, the storm had passed and the sun was high in the
sky. I judged the wind and current would carry me ashore somewhere.
I convinced myself to be patient. A low plane flew over so I
dropped over the side to avoid being seen.”

“
So you ended up here at Harry’s
Cove?” asked Simons.

“
More like thirty miles down the
coast. Came ashore near unoccupied summer cabins and made myself at
home. I got my strength back; but being settled, I couldn’t stay
there. Finding Harry’s Cove was an accident. Here, no one was
looking for me. I was safe.”

“
I know how your caper ended, but
not how it started.”

“
The storm is lifting.”

“
I can have my buddies move on,
pick me up on the way back?” offered Simons as he slipped off the
stool.

“
No.” Trent grabbed his arm. “Slip
Harry a fiver and have him tell them. We go out the back or the
deal is off.”

Sam Simons reached for his wallet.

A narrow trail cut into the face of a jagged cliff
snaked its way up in a steep rise. Dense scrub brush obscured the
trail from unwanted observers. Simons paused often. “Let me rest a
minute,” he puffed, hugging the high side. At the trail’s end,
tucked in back off a narrow ledge, barely noticeable, stood a small
cabin, just two rooms: a side room and everything else. A wood
shingled roof covered with slimy, green moss was in a bad state of
decay. Below the ledge the surf clawed at black rocks covered in
tangles of seaweed, a scene not for the faint-hearted. Trent shoved
the door in, doffed his cap scattering its wetness across the
rough, fir-planked floor. He flicked his cap in a practiced move
across the room. It caught on a wooden peg. The rooms reeked of the
dampness of the ages and green wood smoke. A chair, table, sofa and
bed, had been randomly shoved about. Splattered windows bore stains
of water leakage.

“
It’s not mine,” Trent volunteered
to an inquisitive face. “It’s a friend’s. He lets me use it. He’s
off fishing in Alaska.” Grabbing a poker, he stoked up dead ashes
in a small, flat-topped cast iron stove. He carefully put a match
to kindling. A small puff of smoke arose as the fire leapt into
life. The iron stove quickly heated the larger room; however, the
side room was another story.

“
So, how did you get involved?”
asked Trent.

“
Mayor Grille got your note. We
didn’t know it then, but you were already aboard the
Missouri
. You should have seen his face. The receptionist
said the man who dropped it off claimed it was for real and took
off. The Mayor chucked it aside claiming it was just another
crackpot and laughed it off. I didn’t see the humor. I asked the
receptionist what he looked like,”

‘
Grungy,’ she said ‘He had a small
face; he was wiry, and weasel-like. Looked like he had been in a
fight and lost. He was nervous as a cat, kept licking his lips,’
Simons continued.

Trent laughed, “That was Armand Schiller.”

“
We tracked him down.” Simons
added, flatly. “He had a record as a small time hood, a go-between,
pulling marijuana off the coast and shipping it inland. A small
fry. We had an eye on him hoping to net the big fish. We were
tipped off he was setting up a boat called the
Helga
for his
next shipment. He was a real low-life. The joke around the precinct
was he once offered his mother to a sweat shop for a
buck.”

“
Schiller was my messenger,” Trent
confessed, “After we took over the
Missouri
, I released him,
Captain Larsen, and the
Helga
. I had no further use for any
of them, except for Schiller to deliver the message. I wanted him
caught. He finally did something right.”

“
We put out an APB. The Lynnwood
police nailed him high-tailing it for Canada. We found $50,000 on
him. Said he got it from a Captain Larsen,” said Simons

“
You mean, he stole it from
Larsen. That’s what I paid the Captain for use of the
Helga
.”

“
Schiller claimed Larsen owed it
to him. It was supposedly a final payment on the
Helga
.
Schiller had laid grappling hooks into the Captain,” added Simons.
“We still weren’t certain if you were for real until the
Helga
docked around 2130 that evening. Captain Larsen
verified you chartered him to take a work crew and their gear out
to the
Missouri
. He said you claimed the Navy was getting
her ready to tow to Long Beach.”

“
That was the truth.” Trent
touched his hot coffee mug.

“
Orville Newby Hatcher was your
ticket onto the
Missouri
, wasn’t he?” Simons
continued.

“
Orville Newby Hatcher,” Trent
reminisced, easing off. “Newby hated that moniker ‘Orville.’ He
almost didn’t make it into the Navy, it took a connection. Poor
Newby, he never fit in, certainly not as a seaman. His small,
overweight body, big head and outsized round, cherubic face, made
him an object of ribbing. Long sloping shoulders and a sunken chest
kept him a butt of jokes. His slender arms and delicate, languid
fingers, made a complete caricature. To top it off, Newby had these
coke-bottle glasses, which were as much a part of him as arms and
legs.”

“
Newby knew his trade. A yeoman,
wasn’t he?” Simons shifted an unlit cigar to the other side of his
mouth.