Read Silvermoon. A Tale of a Young Werewolf. A YA Novel. 12-18 Online 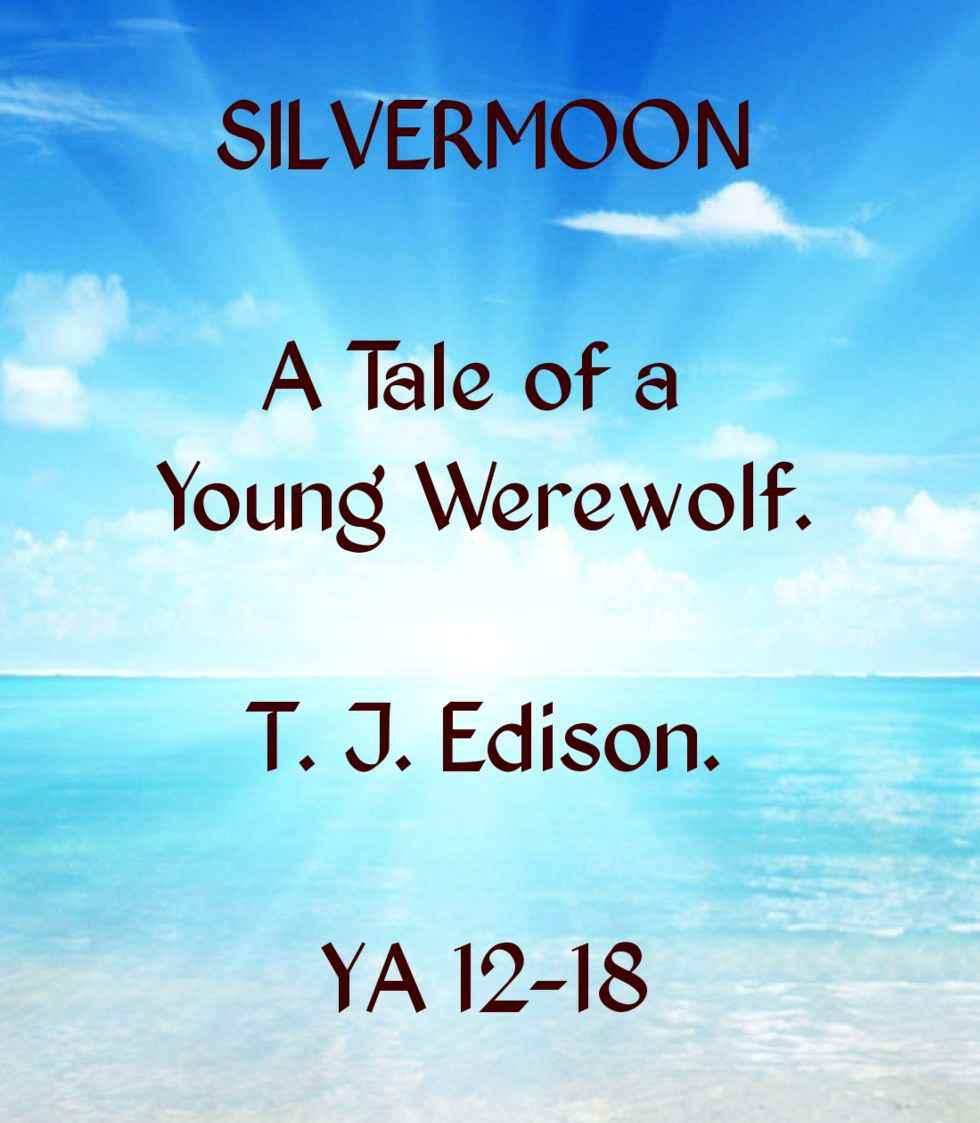 The Tale
of
a

All Rights reserved. No part of this publication may be reproduced, copied, stored in a retrieval system, or transmitt
ed, in any form or by any means
(electronic, mechanical, photocopying, recording, or otherwise)
without the prior written consent of
both
the copyright holder,
and the above publisher of this book,
nor be otherwise circulated in any form of binding or cover other than that in which it is published and without a similar condition being imposed on the subsequent purchaser.

She’s been gone a long time now
, and I still miss her,
her silly grin, her soulful eyes, the way she looked at
me, asking for approval, the ‘
Did I do that right, were you impressed?
’
sort of look, while holding out her paw for confirmation, the way all sheepdogs do.

My parents told me we have almost the same birthdates, March 1942. She passed on when I was twenty. I remember her lying there on her side on her tattered old blanket that evening and I realized she had been awaiting my return. I knelt beside her, and she raised her head a little and looked at me and held out her paw in her usual manner and I took it. I sensed her pleasure at this, and then she laid her head down and closed her eyes for the last time.

We had spent many happy days together, chasing rabbits and squirrels, never catching them, never meaning to. Our first separation came a little earlier than expected, it all started that day, the day we went to the cattle market, when my life was turned upside down
…

It was market day in Lyndon, a small town in Cambridgeshire by the river
Cam
. Here was where Iain and Helen Longfellow brought their livestock for sale at the monthly cattle market.

It was to be the last market day for their twelve-year-old son Jason for some time, as he would leave soon for a private school in the next county.

His parents travelled on horseback, with his dad leading on Taurus and his mum riding Aries at the rear, while Jason and Jessie, their sheepdog, kept the two-dozen sheep in line.

The market place was crowded. They herded their flock - consisting of British Milk sheep and one of the
Cambridge
rams that had reached maturity - into one of the pens.

While his mum stood by to answer any questions from potential buyers, Jason and his dad viewed the rest of the animals on show. They saw several breeds of interest. His dad pointed to one. “That’s an Oxford Down,
it’s
the largest heaviest of the Down breeds, with a capacity for fast growing and early maturity, it is an ideal crossing ram too.”

Jason pointed to another, a ram with curling horns, standing alone. “I know that one,

it’s an Exmoor Horn, look at his body.”

“You’re right, look at those horns too, I wouldn’t like to be caught bending when he’s on the rampage,” answered his dad.

They visited the sideshows, one of them was a
‘dunk him and win a piglet’
set-up. A man dressed in an old-fashioned policeman’s uniform, plus helmet, sat on a small plank set across a water tank next to a large wooden bull’s-eye, some twenty yards away. An elderly woman stood by the stand - an old wooden table - shouting, “Sixpence a go, dunk my old man and win this lovely piglet, a British Saddleback, it’s a male too. It’s not been castrated so you can use him for breeding.”

Jason dug into his trouser pocket and gave the woman two three-penny bits. “We could do with new stock for the pigs,” he said to his dad, and picked up a well-worn cricket ball from the box on the stand.

The man on the plank called out, “You must be joking, you’re just a kid.”

Jason ignored him and let fly with a good follow-through as the man shouted, “You couldn’t hit the side of -aaaah!” and fell into the tank with a splash as Jason’s ball hit the target.

The woman laughed until tears rolled down her cheeks.

Iain pointed to the piglet. “Our Black Saddleback I think.”

The woman picked the animal out of its pen and handed it over. She patted her bulging purse and winked her eye. “I’ve enough money here to buy a half-dozen more.”

The sale of their sheep went well. His mother was delighted with the piglet. “What did you pay for it,” she asked, knowing Iain had very little money with him.

“Sixpence,” said Jason and told her of his achievement.

“I don’t believe it, but I must. Twenty yards you say,” she said and gave Jason a hug.

With the money from the sale they purchased a Rhode Island Red cockerel to breed with their with their White Leghorns, as the former cockerel had landed in the soup pot after mistreating the hens badly and attacking anybody who tried to enter the coop.

They shopped at the butchers and his mum selected half-a-dozen boar chops for their evening meal.

As they left the market place, with Jason seated behind his mum on Aries, a voice called out from the pavement, “Nice throw, Jason.”

He looked down, smiling, and called out, “Thank you,” even though he didn’t recognise the voice. He didn’t recognise the face either, a pale and spotty-faced young man, standing there alone, dressed in tweeds. He wasn’t one of the youths who his father employed at harvest time.
So how come he knows my name?

A strange smell drifted up from him, not the usual odour one expected from a young man, as it reminded him of something false, a deodorant and something sour. His thoughts broke off as his mother said to him, “It’s about time you had a pair of decent shoes. You can’t wear your old boots when you go to college.”

She said to her husband riding beside them, “I think we have time enough, today, what do you say?”

“Of course, he’s earned it anyway.”

They rode across the bridge straddling the river and headed down the main street. Jason’s nose wrinkled at the stink of car exhaust fumes. He had an acute sense of smell, meaning he could smell things whether he wanted to or not, especially unpleasant smells. His mum and dad smelled of the farm, a fine mixture of every single animal and what surrounded them. It was other people, the ones in the town, they smelled of stale cigarette smoke and alcohol, and some of them didn’t wash their bodies often enough.

As usual, the townspeople gawped at him and his parents on their huge farm horses. His parents didn’t own a carriage, just six work horses. Four of them were large, gentle beasts, used for towing the hay wagon, or ploughing the odd field. The other two, also well-built, were much shorter.

While he and his mum entered the shoe shop, his dad remained outside with Jessie and the horses.

His mum brought him several pairs of shoes. He selected a pair and walked around, getting the feel of them.

He was so intent, observing his shoes, taking in the smell of leather that he didn’t see her standing there. She stood behind her mother, who was sat on a chair, trying on a pair of shoes.

He bumped into her and knocked her forward. She gasped as he grabbed her round the waist. Her body was soft, like a lamb’s, she smelled of heather and was as light as a down pillow and he lifted her with ease, expecting her to scold him or call him something - but she didn’t. She turned to him, and looked at him, with her eyes wide and her mouth open.

She was dressed in a pink summer dress and her hair, which hung down past her waist like a shawl, was a mixture of blonde and bronze, contrasting heavily with his black shaggy mane that hadn’t seen a comb for some time.

Her figure was long and slender, which brought her forehead level with his chin. He wondered what to say, should he wait until she spoke or should he apologise? When he looked deep into her crystal blue eyes, his knees wobbled. His cheeks burned and his heart thumped inside his ribcage.

She dropped her gaze. “You’re quite strong. I would have fell over if you hadn’t caught me.”

His heart slowed down some, his knees no longer threatened to dissolve and he managed to say, “I wouldn’t have needed to if I hadn’t bumped into you. I’m terribly sorry.”

Holding out her hand she said, “I’m Jennifer Townsend, pleased to meet you.”

He took her hand, she gripped his firmly and he returned the pleasure. Then a strange thing happened, he felt himself floating. His feet left the ground and the pair of them rose together. He heard nothing at first, and then the sound of the wind echoed through his mind. The scent of wild flowers filled the room. He heard insects humming and the light in her eyes sparkled. A strange sensation spread from her hand and along his arm and encompassed his whole body, he felt as if-.

A quiet voice shattered his dream, “Are the shoes to your liking, young sir?”

They two of them landed with scarcely a bump, or so Jason thought, and he turned his head briefly to the voice. It was the shop assistant; a pimple-faced youth who smelled of toilet water and some awful body smell, he stood there with his head bowed slightly, his pale hands clasped together.

“Yes, thank you, they’re a good fit, I’ll take them.” To his relief the youth walked off, taking his smells - which were vaguely familiar - with him. Jason returned his gaze to the angel in pink and said, “I’m afraid I must go now. I live at Longfellow Farm, on the other side of Crow’s Hill.”

Her eyes widened and took on a faint glow. Whispers echoed in his mind and the scent of flowers returned.

She startled him by saying, “I live by the river - the white house near Grant’s Ford.” Her eyes twinkled as she continued. “Does the river run by your place?”

“I love swimming,” she said and lowered her voice. “Me and my girl friends swim in the all-together in the evening, when the ford is closed.”

Her smile widened as he frowned and asked her, “What is the all-together?”

She was about to answer when her mother called, “Jennifer, I’m ready, let’s be on our way, my dear.”

A tall blond-haired woman, wearing a dark blue dress, narrowed her eyes at Jason as she took hold of Jennifer’s left wrist.

Jason released his hold before she was whisked away and watched the pair as they left the shop.

He joined his mum as she fumbled with her purse. Her face was slightly flushed. “The shoes are fine, Mum. Tell me, who was that woman with the young girl?”