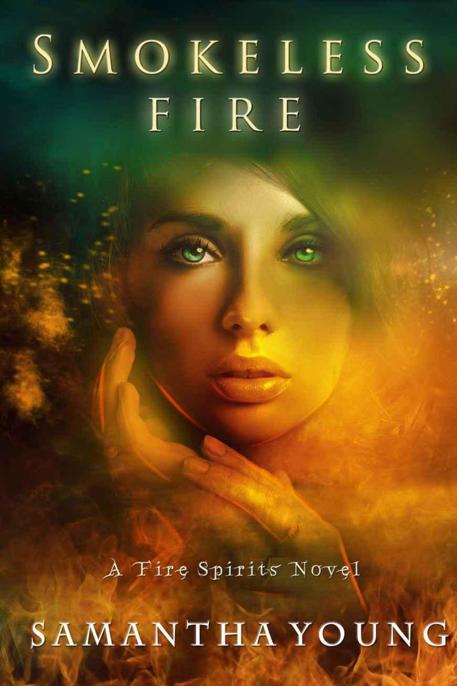 Other books by Samantha Young

Moon Spell (The Tale of Lunarmorte #1)

River Cast (The Tale of Lunarmorte #2)

Blood Solstice (The Tale of Lunarmorte #3)

Blood Will Tell (Warriors of Ankh #1)

Blood Past (Warriors of Ankh #2)

Shades of Blood (Warriors of Ankh #3)

For K McJ and all you do. Love you lots.

The swarm of Jinn is passing,

And it whirls, hissing.

Old conifers, stirred by their flight,

Their herd, heavy and swift,

Flying in the vacant space,

With lightning flashing at its edge.

The Stars are Not Wanted but the Sky Will Submit

Her eyes attempted to overcome him. Everywhere he glanced those eyes of a thousand nights, eyes that had made love to every spectrum of color this realm and the others had to offer, were refracted on the cold glass and black marble of his home. He imagined those eyes had prevailed over many a worthy foe. Tonight he would pretend they had prevailed over him.

What happened after that was of no interest to him.

It would be of no interest to him unless He willed it so.

Ghost in the Soul

Ari’s eyes followed the swipe of Mr. Dillon’s eraser across the board, wiping out the poor chalk-figure hangman who had met his full and complete death — a head, torso, limbs and all — when the senior class had failed to figure out the blanks equated to
accumulated depreciation
. The last week of school. Business class.

Ari hid a yawn behind her hand and glanced worriedly out of the classroom window to the trees behind the parking lot. She wondered if he was out there already.

“God, I thought this class couldn’t get any more boring,” Nick Melua whispered across to her. Ari made a sympathetic noise and nodded in agreement. Waiting for graduation was a slow torture in hell. That the waiting room at present happened to be Mr. Dillon’s Business Studies class only increased the banality.

Ari winced. She better get used to it. She would be heading off to major in Business at Penn after summer break. Pushing the future and the host of angry butterflies the thought of it created in her belly out of her mind, Ari concentrated on worrying about Charlie. Was he out behind the parking lot?
Again?

She groaned into her wrist and flicked her eyes up at the board.  “W,” she guessed without thinking and immediately felt the heat of the glares from her classmates.

“E,” he threw across the room belligerently and was rewarded with grateful smiles as the word became clearer.

“Entrepreneur!” Staci Pike shouted out with such enthusiasm you could be fooled into thinking she cared. Ari smirked over at her and rolled her eyes at Staci’s sheepish shrug. Staci hated making anyone feel bad and the perspiration rolling down Mr. Dillon’s face that told them he knew he was failing miserably at keeping them entertained, and was beginning to feel the pressure, was not something Staci could just sit back and watch.

Mr. Dillon smiled gratefully. “Correct. Do you want to come up, Staci, and choose a word?”

Ari grinned at her.
See, that’s what happens when you’re nice.

Staci narrowed her eyes on her as she swept by her table. “Meanie,” she murmured loud enough to make Ari snort.

Fifteen minutes later the class grew more fervent in their irritation as they struggled to figure out Staci’s word. Finally Mr. Dillon sighed. “I’m afraid the hangman is definitely… dead. You’ll have to tell us your word, Staci.”

Her dark eyes were wide with disbelief. “You guys are terrible at this game.”

“Aw come on, Staci!” Nick beat his fist against the table, his voice climbing to a whine. “Just tell us.”

Ari immediately began to laugh as the class exploded into an uproar.

“I still don’t
see what the big deal was.” Staci shrugged as they headed towards their lockers.

“You were supposed to use a business
term
.” Ari chuckled, plucking a spit ball out of Staci’s hair and flicking it to the ground. She grimaced, wiping her hand against her t-shirt.

“Bill Gates is a businessman, hellllooo!”

“Hello to you too,” a warm voice purred, an arm wrapping around Staci. She was pulled back into the solid embrace of her boyfriend A.J. Half Japanese (on her mom’s side) Staci’s slight frame was swallowed up in the stocky shadow of A.J.’s wrestler’s body. Her almond-shaped eyes widened slightly before she relaxed into him, tilting her mouth up to his for a kiss.

Ari sighed and turned away from them, yanking her locker open with more force than she had intended.

“Is someone in a bad mood?” A.J. asked softly, grinning sheepishly at the glare Ari threw him over her shoulder.

Staci shook her head. “Nah, I think she’s just bummed out after the longest class in the history of classes.”

“What’s there to be bummed about?” A new familiar voice entered the fray. Ari craned her neck around her locker to smile at her best friend. Rachel grinned up at her, her blonde hair swinging against her chin as she jerked her gaze back and forth between her friends with the excitement of a puppy. “We’re officially free in a few days and… drum roll please.” She gestured to A.J. who supplied the request with his imaginary drum sticks. “It’s Ari’s 18
th
birthday slash graduation party!”

As her friends began talking enthusiastically about their plans for the 18
th
birthday party her dad, Derek, was letting her throw in their house at the end of the week, Ari tried to smile with sufficient animation. It wasn’t that she hated birthdays, or graduation even. It was more the promise of the future. A future she wasn’t so sure about.

“Oh, guys, I have to bring the stethoscope Mom and Dad bought me to the party… it’s awesome,” Rachel chirped happily, her eyes glittering at the prospect of heading off to Dartmouth to do her pre-medical studies. After Dartmouth she was planning on applying to John Hopkins, and Ari had no doubt that whatever Rachel wanted Rachel would eventually get.

“They bought you a stethoscope already?” A.J. snorted. “Dude, you’re not even going to med school for another three years.”

“Seven years of college. You are so insane.” Staci shuddered. “I can’t even imagine.”

Staci rolled her eyes at him but smiled indulgently. “Anything sounds like fun to you as long as it gets you off that farm.”

Ari felt like sinking into the floor if only to disappear from this moment. Her friends were so clear about who they were and what they wanted… it terrified her. It made her feel like a freak. She glanced around at them as they started yammering on about college sweatshirts, roommates, the freshman ten, wondering what on earth happened to her that she didn’t know what she wanted out of life like they did. Staci and A.J. were heading off to RISD together to study Film and Animation, something they had talked about doing nearly the whole three years they had been dating. Ari shut her locker, trying not to have a panic attack. Never before in her life had she suffered from anxiety but she’d had three attacks this last month. She closed her eyes, her back to her friends. When her dad suggested she studied Business at college Ari hadn’t argued. What else was she going to do, right? Unlike her friends there wasn’t anything she’d ever felt particularly brilliant at or drawn to. How could they possibly understand that? She needed someone to understand.

“Hey,” Rachel said softly, her hand resting on her shoulder to tug her around gently. Her blue eyes were wide with concern. “You OK? You’ve been so quiet lately.”

Growing up Charlie had been Ari’s closest friend.  Her family really. He had been there when her dad forgot her ninth birthday, and the time she couldn’t stop crying after the lie she told when she was ten years old caused her dad and his girlfriend to break up. There was also that time she’d gotten her first period and, even though she knew what it was, she had completely freaked out. She’d run off from school during lunch and Charlie had chased her into Vickers' Woods behind the interstate.  When she’d bawled out what was happening he had silently taken her hand and walked her all the way to his house and stammered through a blushing explanation to his mom. Mrs. Creagh had hugged her close and called the school and her dad to explain where she’d disappeared to and why. The phone call was followed by a trip to the pharmacy and a lot more hugging.

Anything good, bad, small or huge that had happened to her, Charlie was the one who had been there. And then something huge — too huge — happened to him and suddenly Charlie wasn’t really
there
to be there.

“Are you worrying about Charlie again?” Rachel huffed.

“Let’s go to lunch,” A.J. interrupted, dodging any conversation to do with Charlie. He thought Charlie was a loser and hated that Ari ‘wasted’ so much time and anxiety over him.

Stemming a wave of anger at her friends and their attitude, Ari pulled away from them. “I’ll catch up in a minute, save me a seat.”

A frown appeared between Rachel’s smooth brows. “You’re not going over there?”

Clenching her jaw, Ari turned her back on them. “Just save me a seat,” she called over her shoulder, dodging students in her path.

“You need to give her a break about him,” she heard Staci say, but A.J.’s response was muffled as Ari moved further through the throng of teenagers.

Bursting out of the front entrance, Ari inhaled a lungful of warm summer air, shaking her hands out as if the gesture could shake out all her worries with it. Her eyes scanned the parking lot for Charlie but she couldn’t see him, which meant he was out behind the lot in the trees where the teachers couldn’t see. If he wasn’t careful he was going to get kicked out. He’d already been held back a year. Not that he cared. A rush of angry wasps awoke in her stomach as they always did when she was about to face him. That hadn’t been the case in the past. In the past, just the thought of him used to relax her.  Pulling her shoulders back, Ari started off across the lot with a determined stride. She just had to know he was alright. They hadn’t spoken in two weeks which was officially the longest they had gone without speaking.