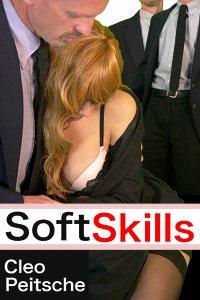 SOFT SKILLS
© 2013 by Cleo Peitsche. All rights reserved worldwide. No part of this book may be reproduced in any form or by any electronic or mechanical means without permission in writing from the author. This is a work of fiction. All names, characters, events, locations and incidents are either the product of the author’s imagination or are used fictitiously, and any resemblance to any persons, living or dead, events or locales is entirely coincidental. This book is for entertainment purposes only.

This book contains mature content and is solely for adults.

Thank you for purchasing this ebook. I hope you enjoy reading it as much as I enjoyed writing it, and I look forward to sharing more of my stories with you.

Other Titles By Cleo

When Elle stepped off the elevator, she was still beaming. The client
loved
her work. The word “genius” had been bandied about, and while she knew that was an exaggeration, she soaked up the enthusiastic praise.

This was the first large ad design project she’d directed on her own. She’d fought hard for the responsibility, and all the late nights and hours spent second guessing every decision had paid off. She’d spent hours comparing two shades of red for the ad’s background, and she’d scrapped her drawings twice because they weren’t good enough.

The victory was totally worth the little sacrifices, and she was soaring. The rest of her team had opted to grab celebratory beers, leaving her to report back to Cunningham and Jonathan, the company’s co-owners. As soon as she brought them up to speed, she was going to make an appointment for a post-work massage and pedicure, a little something to spoil herself.

She tried to control her triumphant smile as she approached the comfortable waiting area.

Jonathan was leaning on the receptionist’s desk, deep in conversation with Nolan. Elle paused to watch them. Jonathan’s long, muscular body was often in a state of casual repose, but she had learned that it was a carefully constructed act designed to make him more approachable. His movie star, fair Nordic beauty was intimidating, yet he put people at ease without seeming to register their discomfort.

Nolan, on the other hand, with his trendy suits and jet black hair, was mercurial. His moods were easy to read. Either he didn’t know how to mask his emotions or he couldn’t be bothered. But even if he could stop his expressions from betraying his every thought, he couldn’t control how his blue eyes darkened when he was angry.

Elle’s smile now had nothing to do with professional success. Here were two of the men who had turned her boring, workaday existence into the kind of life she’d always dreamed about. They were smart and funny, they were rich—Nolan didn’t have to work the receptionist’s desk—and most importantly, they were kinky as all get-out.

Elle walked forward. To her surprise, the men merely glanced at her, then continued conversing in hushed tones.

“Hi,” she said uncertainly. Nolan might ignore her from time to time, but Jonathan was gregarious, always happy to see her. “What’s wrong? What happened?”

“Cunningham is waiting in his office for your report,” Jonathan said without looking at her.

Blinking, Elle decided to let their strange behavior slide for the moment. It was probably about some boring company thing that didn’t involve her. Still, it was unlike Jonathan to be so… distant. She headed down the hallway.

“Cunningham knows what you did.”

Elle’s eyes widened. “What I did? What did I do?” She looked to Nolan for support, but Nolan had his arms crossed, and he was avoiding her gaze.

A disappointed look in his eyes, Jonathan shook his head. “We expected so much from you, Elle.”

He shifted his broad shoulders, turning away from her. She’d been dismissed.

Elle slowly approached Cunningham’s office. Her fingers went so cold that she wasn’t sure if her purse and laptop bag were going to drop onto the floor at any moment. All of her confidence had evaporated, and even she didn’t want to be near herself.

There had to be a reasonable explanation for what was happening, but Jonathan had sounded so
sure.
Elle desperately tried to imagine what she could have done in the last twenty-four hours to upset her bosses.

Absolutely nothing came to mind. Maybe it was something she’d done earlier that they were only just finding out about? She couldn’t think of anything… at least not anything that she hadn’t been thoroughly punished for.

And punishment meant a spanking, perhaps being forced to grovel, forced to service their ardent cocks while she sobbed. But even when she’d been caught lying to them, Jonathan hadn’t shut her out.

He’d never acted like that. She wouldn’t have thought him capable of it. If she’d been wrong about him, she could be wrong about everything.

If she lost the job, she’d lose her lovers. Her closest friends. Cunningham, Jonathan and Nolan… she belonged to them. She belonged with them, too. The unconventional relationship just
worked.

They had lent her out to friends, blindfolded her and forced her to submit to five other strangers. They recognized her need to be fucked by numerous men, and they indulged every one of her late-night fantasies. In return, she forced them to admit that their own feelings were more than casual.

Whatever she had inadvertently done to compromise all that, she didn’t know. But she would do anything to fix it. Anything.

Elle suddenly stopped walking. Was this possibly about meeting her mother? Cunningham had given her until the end of the month to set something up, but she still had a few days before that deadline.

He couldn’t possibly know she hadn’t even asked yet. Could he?

Her heart heavy, she continued on her path. She was on the verge of tears by the time she stood in front of Cunningham’s closed door. Hands shaking, she applied a fresh layer of lip gloss, then fluffed her hair. She couldn’t put it off a second longer—making Cunningham wait wasn’t a smart strategy on a good day. And today was no longer a good day.

She knocked, a lump in her throat.

Her palms were so wet that she couldn’t turn the handle until she wiped her hand on her skirt.

Cunningham sat behind his desk, fiddling with a puzzle box. He wore a dark suit and a somber tie. He didn’t look at Elle as his large fingers pushed and prodded the box.

“Come in and have a seat,” he said, his low voice rumbling.

Cunningham was frightening. Elle suspected she’d always be a little scared of him. He was massive in a way that businessmen rarely were. He worked hard and played harder—his idea of a relaxing weekend was to fly to a foreign country, strap on a parachute-glider hybrid, and jump off a building. He raced cars, he climbed mountains. He silenced other alpha men with a mere tilt of his head. He fucked her with authority, knowing from the first time he laid eyes on her that he would have her, that she would yield to him and that she would beg for the privilege.

She couldn’t think about that now. She ignored the signs that her body was aching for his reassurance—either with his palm on her bare ass or his cock in her throat—that he wasn’t going to end this.

“The client is happy,” Elle said tentatively as she slid into a chair. “Very happy.” She winced; she sounded like a little girl.

Cunningham nodded, his brow furrowed. He wasn’t even paying attention to her. He was so upset that he couldn’t look at her?

He twisted the box and the bottom popped open. Nothing fell out. “My cousin’s nephew brought this during a science museum class trip,” Cunningham said in a tone as casual as if he were making idle conversation while waiting to board a plane.

Elle knew better than to repeat her question; Cunningham would interpret it as her exerting control. Instead, she said, “I’m going to email Mama tonight about meeting you. I swear.”

She uncrossed her legs because her entire body was trembling so lightly that she needed to plant both feet on the floor. She stared down at her lap. She was wearing sheer, black thigh-highs, held up with a simple but alluring garter belt, just the way Cunningham liked. Her shoes were sexy black stilettos, surprisingly comfortable.

The tight skirt she wore was a dark gray, and it was paired with a pink, slinky shell with a knot between her breasts. Nolan had chosen and purchased the outfit, so she knew it was approved.

She crossed her arms. The ends of her auburn hair were still perfectly curled. She knew her makeup was perfect because she’d checked herself out in the mirrored elevator on the way up from the lobby. She always did.

When she looked up, Cunningham, head tilted, stared at her. What he was thinking, she couldn’t begin to imagine.

He opened a drawer and dropped the puzzle box in. Then he closed the drawer and rose. The room was perfectly quiet.

He came around the desk and stood behind her chair. Elle faced forward and tried to pace her breathing so that she didn’t hyperventilate and pass out.

Elle found her feet and awaited his next order. A glimmer of hope flickered through her; if Cunningham was going to touch her, then she wasn’t getting fired.

She tensed, praying to hear his zipper come down. Instead, his fingers grazed the small of her back. Elle shivered, her eyes closing.

“Come with me.” He removed his hand.

Cunningham stepped close to her, forcing her to crane her neck to make eye contact with him. With his dark brown eyes, tan skin and dark hair, he was the epitome of tall, dark and handsome. All that, wrapped in an aura of mysteriousness and confidence.

“Did I say you were fired?”

“Did Jonathan say you were fired?”

Elle frowned. He hadn’t. Cunningham was staring at her, and he expected an answer. “No.”

“And what did Jonathan say?” Cunningham asked.

“He said he was disappointed.”

One of Jonathan’s eyebrows crept up. “I told you that she’s too sensitive for this. Look at her quaking like a bunny rabbit surrounded by a pack of wolves.” He sighed and glanced at his watch. “By the way, we’ve got ten minutes.”

Cunningham grabbed Elle’s wrist and dragged her into the hallway. He set off, taking big, sure strides, pulling Elle along behind him. She was completely confused. She was too sensitive? What did Jonathan mean?

They reached the main conference room. One hand on the flat of her shoulder blade, the other on her hip, Cunningham bent her over the large table. The edge of the table bit uncomfortably into her upper thigh. The wood was warm under her cheek, and smelled like polish.

“We’ll discuss your procrastination with the family meeting later. Do you remember what I told you the day I hired you?”

“You need to work on your confidence. Stick up for yourself. Your work goes well, that’s great. But suppose the client
hadn’t
loved what you presented? If instead of calling you a genius, they—”

“How did you know—” Elle blurted before she could stop herself.

“Got it,” Jonathan said matter-of-factly.

Cunningham spun her to face him. “On your knees.”

Elle gracefully knelt, feet tucked underneath her, knees together, hands folded in her lap. She looked up at her three lovers.

Jonathan unzipped his pants and pulled out his cock. Long and thick, it never failed to make her mouth water. Just looking at it was enough to set her pussy aching.