Read Speak to the Wind Online

Speak to the Wind 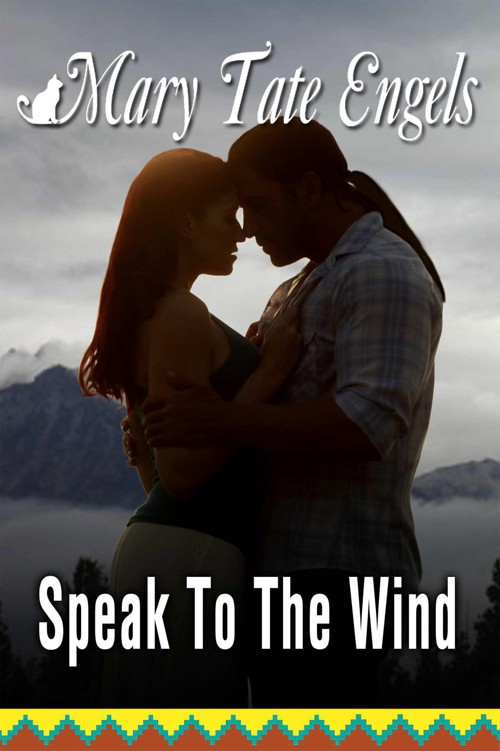 Speak to the Wind

This ebook is licensed for your personal enjoyment. It may not be re-sold or given away.

The only contact Maria Eden had with the outside world was the Apache language radio station.
Before turning the radio on, she rested her hand on top and listened to the absolute quiet around the cabin. The solitude of the mountains spoke to her,
filling her again with the nec
essary ingredients for carrying on her work, her life. That's the way it had been for many years, since she was a child.

Of course, she didn't realize what the mountains did for her then, didn't know of their reviving magic. But now Maria was convinced that when she returned to Phoenix at the end of the week, she'd be rejuvenated. She could once again pursue her
busy, noisy
life, which was her business.

Speechcraft, the company she had formed three years ago to teach corporate executives better communications skills, had grown rapidly as a result of her constant attention and workaholic practices. Her most popular seminars were
‘
Speak Easy into the Microphone
’
and Smile, Rise and Shine, both of which had been conceived right here in this cabin.

Maria clicked on the radio
and static crackled over the airwaves. Sometimes late a
t night she could pick up an En
glish station from the nearest town of Show Low or even from
far
away Flagstaff.
Most of the time though, she tuned in to the local station
and
tolerat
ed
its occasional static.

She listened abstractedly, not understanding the Indian words but finding certain
comfort
in the rhythm and exotic sound of the Apache language. Maria sipped her cream-laced coffee to the harmony of the world news broadcast in a strange combination of English mingled with Apache. Then the station returned to its regular country music, and she slid into her coat.

Maria's early-morning walks
by the lake had become a habit,
a glorious, refreshing ritual. She stepped out onto the porch and inhaled the cedar-s
cented air. The distinctive fra
grance was as soothing
to her senses as the
sounds of the
Apache lan
guage.

A wild
, high-pitched
cry pierced the serenity, and Maria dashed off the porch to search the skies.
There
! H
e s
woop
ed
from his nesting area high in the mountains, surveying his domain.
Bold. Flying free.
A r
are
,
beautiful
b
ald
e
agle.

Her heart quickened at th
e sight, filling her with a com
bination of admiration and pride. He was truly grand, which was why she'd used him as her logo on her business cards and letterhead along with the inspirational phrase
‘
Rise above the ordinary.
’
He certainly did.

The eagle's arrogant white head thrust toward the
rising
sun, his wingspan at least seven feet
as he sailed across the
pink
-
streaked dawn sky. Ebony wings whispered against the wind as he banked toward the lake, and Maria hurried along the road so that she could watch his ritual.

The boat rocked
as the larger of the two men shifted for a better look at the splendid bird that circled them. "We've got a competitor for the next tr
out. Uncle Will. A bald. So mas
sive. Do you know how long it's been since I've seen an eagle flying like that? So free."

The older man lifted his bushy gray eyebrows curiously. "Don't they have eagles in California?"

"Not where I live. Too populated."

"Then how do you..." He halted, knowing the answer to his question before it was asked. He shook his head and looked away. "I'm afraid you've forgotten all the old ways, Joseph."

"Not forgotten. Uncle Will. Just not practiced."

"Then it's time, high time—" Will's heavily accented words were interrupted by the eagle's feral scream as he buzzed their boat, looking for fish or perhaps a duck.

Joe shielded his eyes and continued to watch the sky, the fishing rod forgotten in his large hands. His voice lowered to a rumble. "
Damn
, he's magnificent."

"He's a big one, all right.
Eats too many fish," Will grum
bled, then began fiddling with his fishing line, paying the bird little heed. "It's a sign. A sign that you are welcome here again." He jerked the rod,
and then
patiently reeled in a strug
gling
lake
trout.

The eagle shrieked as if in protest.

Joe sighed heavily and gazed out over the lake. A sign from the mountain spirits? Did he really beli
eve that? If the truth be known
, this same eagle
probably came here every morn
ing for his breakfast. Then it wa
sn't a sign, but a habit. A rit
ual. A survival technique.

Joe knew he had to change his way of thinking, change it to the Apache way if this was going to work. It wouldn't be easy for a man who'd been gone so long.

He gazed at his unc
le, whose copper
–colored
hands pa
tiently baited the fishhook again and flicked the line into the water. Joe studied his own hands, also copper but not so worn. Still, they were Apache hands. Maybe he'd been gone too long, had changed too much.

Or maybe—he watched the great bird dive for a fish swimming
too
close to the lake's surface—maybe the eagle was a good sign that it was time.

The magnificent
bald eagle flew away with his breakfast grasped in
formidable
curved talons, dark-feathered wings spangled with sunlight. His untamed call of pride lifted to the mountain peaks of central Arizona, home of the wind and of the mountain spirits.

Maria
Eden's
appearance
in the Apache reservation gro
cery store often garnered attention from the
Native
Ameri
cans gathered there. It was more than her attractiveness, more than her tawny blond hair and chestnut-brown eyes. She had a casual self-conf
idence that invited women to ex
change greetings with her and men to offer to carry out her groceries. There was no reason to expect today would be any different, but when she stepped inside
Mounting Spirits Trading
Post, no one looked her way.
They had another interest.

A small group
of mostly men
clustered around someone seated in the back of the store beyond the stack o
f Pendleton blankets. The voice
was masculine, pleasant a
nd low toned. Because of her in
terest in public speaking, i
t was a sound Maria couldn't ig
nore.

Listening with growing cu
riosity, she picked out her sup
plies. When they were assembled on the counter next to the old-fashioned cash register, she glanced around for the checker. No one came to her service, so she moved toward the assembly in the rear.

"Excu
se me. Can someone check me out?
"

The group parted f
or a young woman who hurried to
ward Maria with an apologetic smile. "Sorry."

For a moment
all
the Indian
face
s
turned and
stared at Maria.

For a moment she stared back, not at them, but at the man seated in the center of their circle. He was Apache, though distinctive from those around him. Dressed in
brown
cords
and an ecru turtleneck sweater, he was a
large, broad-
shouldered man whose presence dominated the group. His ebony gaze met hers, locked and stared steadily as if able for that brief moment to see inside her soul. Then the Indians congregated around the speaker again, and she lost sight of him.

But she couldn't dismiss the feeling that contact with the man gave her. It wasn't the usual male's curious stare or the straightforward
admiration
she sometimes received
from the locals
. There was something singularly compelling about this man.

"She went into town to see the doctor."

"Her arthritis is acting up again."

“
Tell her
I
was here, will you? And that I hope she's feeling better soon." Maria c
ounted out the cash for her pur
chases. “
Tell her I'll stop by to see her before I leave
the mountains
."

Cradling her bag of groceries in one arm, Maria glanced back at the dark-haired assembly, subconsciously seeking another look at the mysterious man whose eyes did strange things to her. But he was h
idden. She could hear him speak
ing, hear his audience commenting, hear him responding in his low, even-toned voice. She wanted to step closer, to know what he had to say that interested them so completely. But she wasn't included and to join them would have been rude.

Maria drove away from the
little settlement still wonder
ing about the man and what attraction he had for the people gathered around him. She liked the gentle way he spoke to them and admired that natural ability to mesmerize a crowd. He had mesmerized her, too, in the brief moment when their eyes had met.

As the road wound upward into the heart of the White Mountains, Maria was aga
in filled with a growing exhila
ration, a sensation that was still somewhat of a mystery to her. She eased back on the accelerator, reminding herself that she was in no hurry. This wasn't
the fast lane; this was her es
cape to the mountains, to the cabin and its memories. She forgot about the Apache wit
h the sonorous voice and the be
witching eyes.

The journey to her cabin was like a step back in time, taking the traveler from air-polluted civilization to the frontier
like High Meadow Apache Reservation in the heart of the White Mountains. And Maria loved it.

Pulling into the familiar driveway, she paused to listen to the wind whispering in the pi
nes and to inhale the fresh, ce
dar-scented air. Grabbing her groceries, she mounted the porch steps and intruded on the strong silence of the rooms. The floor creaked as she headed for the kitchen and began storing her
food
.

Memories dominated the
place. Everything seemed to ig
nite still
vivid recollections of her father. He had built the place when she and her brother, Rob, were youn
g. It was ex
citing to have a cabin loc
ated on the Apache Indian reser
vation where the fields and woods provided wilderness settings for their childish games.

Their parents, along with several P
hoenix friends, had signed long
term land leases with the High Meadow Apaches and built a cabin on the lake. The place had become a refuge from the
stifling summer heat and a snow
covered winter playground for
her
family.

"Everyone will benefit," her father had reasoned. "We want the vacation spot and are willing to pay for it. The Apaches want the rent. It makes for good business and good relations between the two cultures."

Maria had never questioned his wisdom. Still didn't. She knew how much fun it wa
s to vacation in the White Moun
tains and believed him to be right. Her parents even talked of retiring here. But Alan
Richey
had died of a sudden heart at
tack long before retirement age.

Heavenly Honeymoon (Zoe Donovan Mysteries Book 15) by Kathi Daley
For Love of the Duke (The Heart of a Duke Book 2) by Christi Caldwell
Wicked by Any Other Name by Linda Wisdom
Too Close For Comfort (Sweetrock Cowboy Romance Book 2) by Leighann Dobbs
Shades of Atlantis by Carol Oates
i 3d091ef367b6a8bf by Unknown
Empire of Bones by Christian Warren Freed
Painkiller by Robert J. Crane
His to Master and Enjoy [The Billionaires and Their Playgrounds 2] (Siren Publishing Everlasting Classic) by Jan Bowles
Beyond Belief: Islamic Excursions Among the Converted Peoples (Vintage International) by Naipaul, V.S.