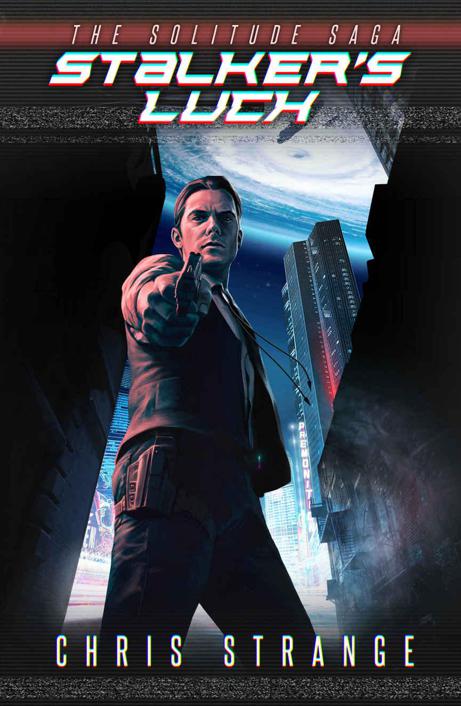 EVEN AT THE END, JUSTICE MUST BE SERVED.

The Eleda system is dying. Cut off from the rest of humanity, the ancient machines that keep the colonies alive are breaking down, one by one.

Bounty hunter Eddie Gould intends to write the tales of the system’s last days with a pen in one hand and a gun in the other. Alongside his partner, ex-revolutionary Dominique, Eddie hunts a fugitive through the flickering neon and crippled life support systems of a doomed space station.

But a dark secret lies hidden in the space station’s twisting depths, a secret that will make Eddie question everything he thinks he knows about his past.

And in this place, truth and justice are only found at the end of a gun.

Hard, fast, and brutal,
Stalker’s Luck
is a stylish retro-future tale of sin and desperation at the edge of space. 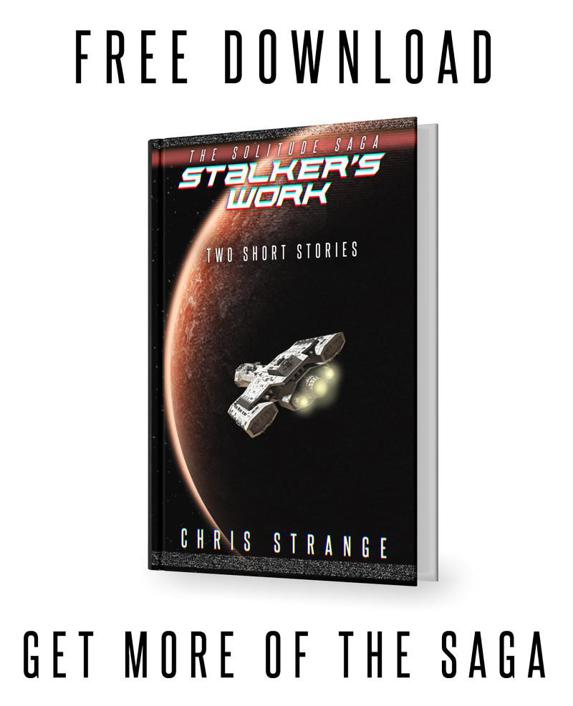 Sign up for the author’s New Release Email List and get a free ebook copy of
Stalker’s Work
. Join Dom and Eddie for two more thrilling side adventures!

Map of the Eleda System 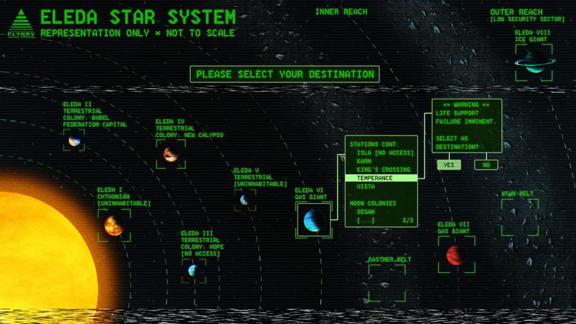 In the cold light of the system’s distant sun, the
Solitude
dropped into orbit around a gas giant of pale blue. The Feds met the ship like they always did: with orders barked and weapons locked.

Behind the
Solitude
’s helm, Dominique Souza loaded her sidearm and eased into dock with the Feds’ orbital outpost. The maglock clunked against the hull with a shudder that ran through the ship and down Dom’s spine. The comm unit squawked instructions from the Fed communicator. Dom obeyed, shutting down the
Solitude
’s engines, releasing the airlock controls to the Feds, and powering up lights throughout the ship’s cramped interior.

“Prepare to be boarded,” the Fed’s voice crackled through the speaker.

“Yes, sir.” She switched the comm unit off. “Motherfucker.”

She unbuckled herself from the pilot’s seat and stooped to make her way down the corridor, pulling on her duster coat as she went. Her boots clanged on the walkway grating. The
Solitude
whined as the engines spooled down. Dom patted the bulkhead. “Tell me about it, girl. Me too.”

She stopped at the closed airlock, spread her legs, and clasped her hands together behind her back. An ancient computer buzzed on the other side of the airlock. The Feds were taking their sweet time. But something else tickled her hearing. A faint sound of screeching and synthetic beeps. Was the ship damaged? Had she docked her too roughly?

She turned on the spot, following the sound. Her eyes fell on a closed metal hatch. She sighed.

With a glance at the still-closed airlock, she took two quick strides to the hatch and hammered on it with her fist.

“Turn that noise down,” she yelled. “We’ve got company.”

There was no answer. Son of a bitch. She spun the handle and wrenched open the hatch. A cacophony of what she could only guess was supposed to be “music” assaulted her.

Inside, Eddie Gould lay on his bunk in a one-piece sleepsuit, one leg crossed over the other, bouncing in time with the synth music. His eyes were closed.

Eddie’s head rolled to the side and one eye drifted half-open. “This is the new Sin Tower album. This is good stuff. The Feds might like it.”

“Turn that off or I’m leaving you on Temperance when we depart,” she said.

Eddie’s eyes opened. He yawned and swung his legs over the side of the bunk. With a touch of the wall panel, the music went silent. “How long until the Feds arrive?”

She glanced back at the airlock. “About five seconds.”

“Okay.” Eddie stood, stretched, and groaned. “Do we have any coffee left?”

“I don’t know. Hurry up and get dressed.”

He ignored her and climbed out of the hatch. A warning siren sounded and the airlock began to hiss open. Eddie wandered off down the corridor, towards the ship’s common room.

“Where are you going?” Dom said.

“Coffee,” he said simply. Then he disappeared through another hatch and out of sight.

She took a step after him.
I’ll kill that son of a—

She didn’t manage to finish the thought before a voice boomed out of the rapidly widening airlock. “Show your hands!”

She threw her head back in exasperation and raised her hands. “Come on, gentlemen. You do this every time. What do you think I’m going to do?”

Boots stomped on the walkway. Three Fed marines in grey fatigues swept past her, submachine guns tucked against their shoulders as they rushed through the ship. One headed in the direction of the kitchen. A moment later, she heard him calling through his vox. “Hands! Put them up! Put down the cup.”

There was a smash of metal clattering against the floor.

“You’ve gotta be kidding me. This your first week on the job, Jack? If you’re pissing your pants about a bit of coffee, I don’t think you’re going to make it to Friday.”

Movement in the airlock drew Dom’s attention forward again. A white-haired Fed officer with a boyish face strode along the gangway and cast his gaze up and down Dom. His face was pocked with old acne scars. A heavy pistol was holstered to his belt. The slashes on his breast marked him as a lieutenant. No high-ranking officer would get stuck manning this outpost at the arse-end of Eleda space. They left that to the kids. The petulant ones that no one wanted back on Babel.

“Big, aren’t you?” the lieutenant said as he stopped in front of her.

It was going to be one of those days. “I suppose so, sir.”

There wasn’t any supposing about it. Dom was tall enough and broad enough to break the lieutenant’s back over her knee. And she was tempted to. But she just lowered her hands and tightened them into fists behind her back.

Out of the corner of her eye, she spotted one of the marines wrenching open the hatch to her quarters. A moment later there was a crash of food bowls and cinevid files being swept to the floor. Dom cringed internally.

The lieutenant brought up his tab and scrolled through. “The
Solitude
. Registered at Carousel station to Dominique Souza.” His eyes flicked up to her. “That’ll be you.”

“And your companion is…” He scrolled further. “…Eddie Gould. Your husband?”

“Hm.” He lowered the tab and called to his men. “Anything?”

“Care to show me to your common room, Miss Souza?” the lieutenant said. He glanced in the direction Eddie’s voice had been coming from. “This way, I presume?”

Dom led the lieutenant down the corridor and through the hatch. Eddie sat with his legs up on the table, arms folded across his chest. A metal coffee cup lay on its side in the corner of the small common room, brown liquid dripping through the grating. One of the marines stood over him, fingers twitching on his submachine gun. Between the four of them there was barely enough room to move.

“Gather the others and wait by the airlock,” the lieutenant said to the marine. With a final glare at Eddie, the marine shouldered past Dom and called to his friends. Eddie waggled his fingers at the marine’s back as he went.

The lieutenant took the last remaining seat at the table, leaving Dom to stand. She didn’t object. The Feds liked to remind everyone that they were in charge. They were all bluster, until they weren’t anymore. She’d spent her youth killing Feds, destroying their facilities, stealing their supplies. She’d probably killed three or four dozen if you included the ones who got blown to chunks by the bombs she’d planted. But that was the problem with the Feds. No matter how many you killed, there were always more.

The lieutenant stared at the soles of Eddie’s shoes resting on the table. “Do you mind?”

“Putting your feet down.”

He shrugged and lowered his feet to the ground. “No problem, Jack.”

“Yeah? How about that? That’ll be three hundred vin, by the way.”

The lieutenant’s mouth formed a thin line. Dom threw a look at Eddie. He was going to get her ship impounded if he kept this up.

“Well, I’m sure when you’ve successfully completed this job you’ll be able to replace your coffee without any trouble,” Pine said. He brought up his tab again. “Although I see Miss Souza is still paying off her considerable debt to the Federation.” He smiled up at them. “Perhaps you’ll have to be more careful with your expensive coffee in the future.”

Eddie smiled back with all of his teeth.

“Can we get on with this, gentlemen?” Dom said before anyone decided to start shooting. “It’s my understanding that Temperance only has about two weeks left before the last oxygen generators shut down and it becomes uninhabitable. It’s in all of our best interests to ensure the job is done before then.”

“Quite right, Miss Souza,” Pine said. He tapped the screen of his tab and laid it on the table. “This is your quarry. Roy Williams. Former leader of the White Hand syndicate, convicted on three dozen counts of murder, assault, torture, and extortion. Sentenced to life plus fifty at the Bolt supermax facility in the Outer Reach. Four months ago, Mr Williams enlisted the aid of a guard to smuggle twenty-six kilograms of IL-KEM high explosives into the Bolt. He used them to stage a breakout. That guard and twenty-two others were killed in the explosions. Five prisoners—including Williams—escaped on a hijacked Federation prisoner transport shuttle. Federation ships attempted to pursue, but Williams evaded them.”