Poor me? Is that what she thinks I’m about? That I feel sorry for myself? Everything I want to say crowds into my throat. I’ve been trying to
get my limp front and center, trying to put it out there before anybody else could. “I’ve been trying to avoid pity,” I finally manage to say.

She stares at me for a minute. Her dark eyes look almost black against the crisp white of her button-down shirt. “Fair enough. But by being afraid that people will laugh at you instead of with you, you’ve sold yourself out. You’re in danger of becoming the comedian with the limp instead of Paige Larsson, the comedian.”

The truth hits me like a slap. She’s right. Heat floods my face.

“Look, you have tremendous potential. With a little guidance, you could go places. If you’re truly serious about comedy and are willing to work hard, I’ll help you,” Raven says. “I’ll do Skype sessions with you once a month, and we’ll go over your material.”

I can’t believe what I’m hearing. “Seriously? You’d help me with my video routines?”

“No.” Raven shakes her head. “I’d help you with your
comedy
routines. All of them. Stand-up and improv and video comedy.”

My stomach sinks. It’s the opportunity of a lifetime. The other contestants would kill to be
in my shoes. But there’s no way I’ll put myself through that again. “I can’t do stand-up. Or improv.”

“You think you can’t. I think you’re afraid.”

The heat in my face races down my neck. Maybe I am a little.

“I know what it’s like. When I went from YouTube to stand-up, I had such bad stage fright I’d puke before I went onstage. Every single time.” She laughs. “It was my very own lose-weight-without-trying program.”

My eyes widen. “I can’t believe it.” She looks so natural onstage.

“Believe it. It got so bad I almost gave up.” She looks at her watch. She needs to be somewhere, I can tell. “If you’re a true comedian, you need to master every aspect of comedy, even the stuff that scares you.” She gives me a half smile. “You have to be prepared to step out there.”

I am a true comedian. At least, I want to be. I look down at my hands. A pressure in my chest makes it hard to breathe. But if I step out, I have to be prepared to fall down. Maybe that’s what separates the true comedians from the wannabes. Being prepared to bomb. My heart crowds into my throat. Do I have the guts to risk bombing again?
I look back up, take a deep breath. If I really want this, I have no choice. “Okay.” I’m giddy with excitement and fear and gratitude. “I’ll do it.” I blink back tears. “Thank you.”

“You’re welcome. I’m looking forward to working with you.” She stands. “With luck, you’ll be back on that stage next year.”

“So what’s your story today, Larsson?” Ms. Vastag asks when she stops beside my library cubicle at school Monday afternoon. I spot Hunter walking through the door. Brooke, who’s sitting with one of the twins, waves at him. “Why aren’t you in gym?”

“I have a bad cold.” It’s true. I stayed home this morning, and if I didn’t have a math quiz next block, I’d still be under a blanket on the couch.

She frowns. “And I have hemorrhoids. Big deal.”

I start to laugh.

“You think that’s funny?” But her words have no punch, and there’s a glint of amusement in her eyes.

“Not really.” But I do. With her delivery, Ms. Vastag could be onstage. Hunter walks by and wiggles his eyebrows at me. I give him a little wave.

Ms. Vastag watches him pull out a chair at a nearby table before slouching against the cubicle and looking back down at me. “I heard about the competition.” She looks especially colorful today with her rainbow-striped socks and purple Birkenstocks. “I’m sorry you lost. Word is you killed it onstage though.”

“Yeah, well, I didn’t kill it enough to win.” I still feel rotten about letting people down. Mr. Roskinski’s been great about it, and so have my friends, but that doesn’t take away my disappointment.

“Like I said last week, life’s a poker hand. There’s always another game coming. As long as you pick up the cards and deal yourself in.”

“I guess.” Maybe I’ll get shortlisted for the
ITCF
next year. If I don’t let fear or doubt or Brooke’s mean comments get to me. I still hope one day we’ll be close again. That she’ll stop resenting me and grow up. But it may not happen for a long time, if ever. Life doesn’t come with a guarantee.

Ms. Vastag bends down. She’s so close I can see the coffee stains on her front teeth. “I see Brooke’s trying to move in on your territory.”

I look at Brooke. She’s practically jumping out of her chair trying to get Hunter’s attention. I look back at Ms. Vastag
. Territory
? Did I hear her right? Has the cold plugged my ears?

I’m stunned. Ms. Vastag isn’t like any other teacher in the school, but this is getting personal, even for her. “He’s not my territory. He doesn’t belong to me.”

She rolls her eyes. “Maybe not, but the guy’s been following you around like a homeless puppy for the last six months. You need to put him out of his misery and tell him how you feel.”

Oh jeez. Is it that obvious? Does everybody know? I look at Brooke again. Does she? Is that why she’s been throwing herself at Hunter lately?

Ms. Vastag follows my gaze. “Brooke wants what you have,” she says. “She’s threatened because you’re funny and she’s not.”

Brooke’s just jealous
. I flash on Hunter’s words. Maybe he’s right about that too.

“Forget your sister.” She inclines her head ever so slightly toward Hunter. “Well? Are you going to just sit there?”

What? Ms. Vastag is telling me to go talk to Hunter? No way. The cold
is
messing with my head.

She gives me a pointed look. “Don’t be a wuss, Larsson. Remember that other thing I told you? We’ve all got something.” She stops, presumably waiting for me to answer. When I don’t, she smiles and says, “Just don’t let your something get in the way of having a life.”

It’s the smile that gets me. That’s only the second time Ms. Vastag has smiled since grade eight. It has to be a sign. I look at Brooke. I look at Hunter. Then I push my chair back and stand.

It’s time to get in the game.

Thanks to Sarah Harvey, who got the ball rolling, to Barry for insisting comedy isn’t all that scary, and to Zach for insightful comments along the way.

LAURA LANGSTON is the award-winning author of nineteen books for children and young adults, including
Hot New Thing
in the Orca Limelights series. When she’s not writing, reading or walking her Shetland sheepdogs, Laura can usually be found spying on people in the grocery store or twisting herself into a pretzel in yoga class. For more information, visit
www.lauralangston.com
. 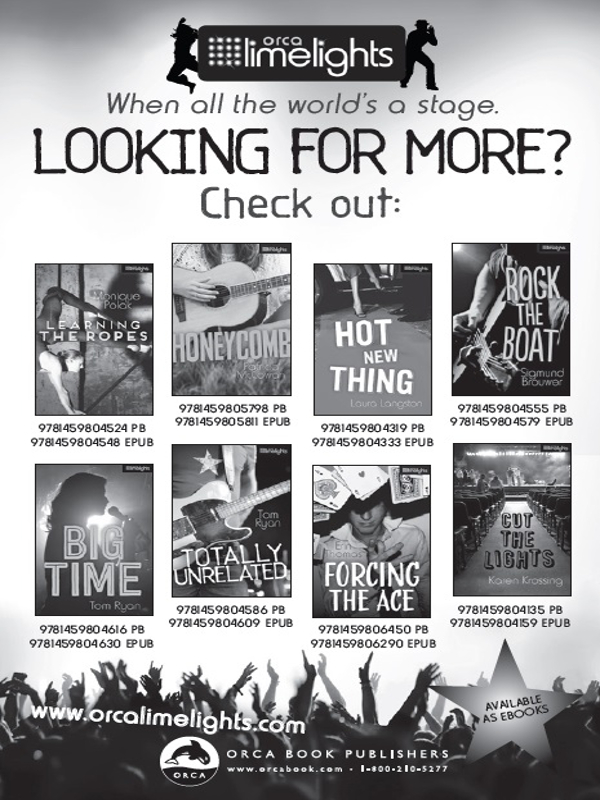