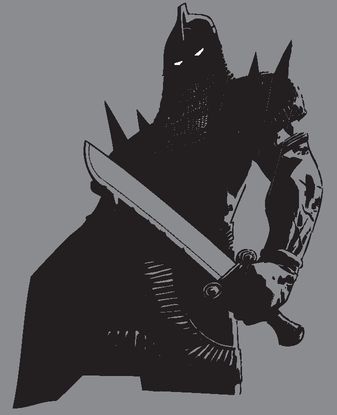 Roz Dalton realized she’d been dozing and lifted her head.
What woke me?
She looked toward the gray-clad men, but they seemed to be as stoic as ever. Beside her, Max coughed silently.
He’s getting worse. They all are. I can’t even hear their breathing.
Then she realized she couldn’t hear anything at all. Even the low hum of the building’s air conditioner had stopped. She scraped her boot heel on the concrete floor. Nothing.
She gently pulled at the handcuffs, knowing that they should make a clicking sound as they opened. Still nothing. The cuffs noiselessly dropped to the concrete floor.
Either I’ve gone deaf, or something’s blocking out all the sound.
Then a movement caught her eye: A door behind one of the gray men silently burst open—the man didn’t even notice. A pair of U.S. Army soldiers rushed at him, slammed him to the ground. The other gray men had seen this—they dived for cover.
There was a flash from somewhere behind Roz, then another.
Muzzle flare! They’re shooting!
She ripped the cuffs from her feet as the room erupted in noiseless gunfire.
She scrambled over to her brother, grabbed hold of his legs, and kept low as she dragged him to the side. She was about to go back for one of the Rangers when more soldiers spilled into the room, all with their rifles firing. Roz saw one of the gray men hit in the shoulder, another in the abdomen.
The remaining two had knocked over the large wooden desk and taken refuge behind it. Their weapons protruded from the top and sides, firing blindly.
Roz jumped as a small crater appeared in the floor only inches away from her left foot. To her right, she could see that the soldiers had spread out, but there was no other cover on their side of the room.
We’re sitting ducks here! Maybe I can use my telekinesis to create a sort of shield. . . . I can move only one thing at a time, but if I can figure out when they’re going to fire I can—
She realized that there was a much simpler approach: She concentrated on the heavy desk. It wobbled, then toppled forward, exposing the gray men. They immediately dropped their weapons.
A U.S. colonel strode into the room, gesturing to his men to take care of Max and the Rangers. He was followed by two teenagers, a boy and a girl. The boy appeared to be wearing a flak jacket over a wet suit. The girl was wearing what looked like a leather jacket covered in coins. The colonel saluted Roz and pointed toward the door.
He wants me to go with the others
. Roz shook her head and said, “No way,” but no sound came out.
He nodded as though he’d been expecting this, and turned to the teenage boy. He ran his finger across his throat. Instantly, Roz could hear again.
The boy said, “I’ve released only this room, is that right? The rest of the building is still muffled.”
“Perfect. Ms. Dalton, I’m Colonel Morgan. My men are going to take the rest of your team to the infirmary. Is there anything you can tell us that might help us free the other hostages?”
“I don’t even know where they’re being kept.”
“We do. All right, I want you to stick to the rear with these two, but don’t be embarrassed to use your power if you think it might save lives. Thunder, has anyone else noticed the attack?”
“I can’t tell—I’m blocking the sounds.”
“All right. We’ll play it safe. By the numbers, people. Morales and Goodman, take point. Thunder, let’s bring on the silence.”
The sound evaporated once more.
Colonel Morgan signaled to his men, and they rushed forward. The other doors to the room were locked—one of the men shot out the lock and kicked open the door.
The corridor was dark and empty. Moving in twos, the soldiers cautiously approached each room, burst open the door, and rushed in, one marine crouched low and moving left, his colleague standing and moving right. All of the rooms were empty.
Roz watched from behind with the other teenagers. The boy seemed confident and calm, but the girl with the sword on her back looked nervous.
She briefly wondered if they were brother and sister: They were both—presumably—superhuman, and they were both African-American. Aside from her own family, she’d never heard of any other superhuman siblings.
The soldiers slowed and spread out as they approached a set of steel double doors at the end of the corridor. Two of them dashed forward and crouched down in front of the lock. A minute later they turned back. Roz saw one of them mouth the words, “Can’t open it.”

Mystik Warrior: (Dark Warrior Alliance Book 2) by Brenda Trim, Tami Julka
The Pollinators of Eden by John Boyd
Perfectly Reflected by S. C. Ransom
The Waking Dreamer by J. E. Alexander
Mixed Magics: Four Tales of Chrestomanci by Diana Wynne Jones
Far From Home: The Complete Series by Tony Healey
Bite Me (The Transfigured Ones Book 2) by Michelle Roth
Only with You by Lauren Layne
From the Start by Melissa Tagg
8 Gone is the Witch by Dana E. Donovan