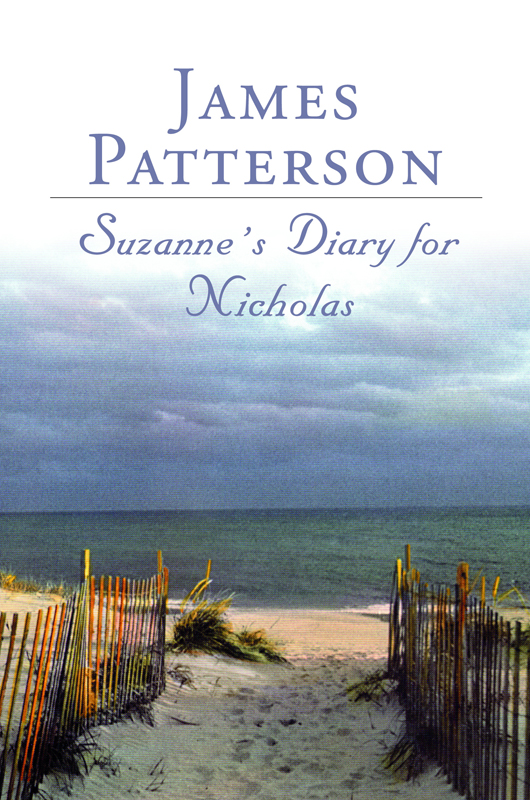 Along Came a Spider

When the Wind Blow

The characters and events in this book are fictitious.
Any similarity to real persons,
living or dead, is coincidental and not
intended by the author.

For those who have loved, and lost,
and loved again

For Robin Schwarz, whose valuable assistance
and big heart are much appreciated

Also, thanks for the help —

Most of all, for Suzie and Jack; and for Jane

K
ATIE WILKINSON
sat in warm bathwater in the weird but wonderful old-fashioned porcelain tub in her New York apartment. The apartment exuded
“old” and “worn” in ways that practitioners of shabby chic couldn’t begin to imagine. Katie’s Persian cat, Guinevere, looking
like a favorite gray wool sweater, was perched on the sink. Her black Labrador, Merlin, sat in the doorway leading to the
bedroom. They watched Katie as if they were afraid for her.

She lowered her head when she finished reading the diary and set the leatherbound book on the wooden stool beside the tub.
Her body shivered.

Then she started to sob, and Katie saw that her hands were shaking. She was losing it, and she didn’t lose it often. She was
a strong person, and always had been. Katie whispered words she’d once heard in her father’s church in Asheboro, North Carolina.
“Oh, Lord, oh, Lord, are you
anywhere,
my Lord?”

She could never have imagined that this small volume would have such a disturbing effect on her. Of course, it wasn’t just
the diary that had forced her into this state of confusion and duress.

No, it wasn’t just Suzanne’s diary for Nicholas.

She visualized Suzanne in her mind. Katie
saw
her at her quaint cottage on Beach Road on Martha’s Vineyard.

Then little Nicholas. Twelve months old, with the most brilliant blue eyes.

What did she think of Matt now? Could she ever forgive him? She wasn’t sure. But at least she finally understood some of what
had happened. The diary had told her bits and pieces of what she needed to know, as well as deep, painful secrets that maybe
she didn’t need to know.

Katie slipped down farther into the water, and found herself thinking back to the day she had received the diary—July 19.

O
N THE
morning of the nineteenth, Katie had felt drawn to the Hudson River, and then to the Circle Line, the boat ride around Manhattan
Island that she and Matt had first taken as a total goof but had enjoyed so much that they kept coming back.

She boarded the first boat of the day. She was feeling sad, but also angry. Oh, God, she didn’t know what she was feeling.

The early boat wasn’t too crowded with tourists. She took a seat near the rail of the upper deck and watched New York from
the unique vantage point of the brooding waterways surrounding it.

A few people noticed her sitting there alone— especially the men.

Katie usually stood out in a crowd. She was tall— almost six feet, with warm, friendly blue eyes. She had always thought of
herself as gawky and felt that people were staring at her for all the wrong reasons. Her friends begged to differ; they said
she was close to breathtaking, stunning in her strength. Katie always responded, “Uh-huh, sure, don’t I wish.” She didn’t
see herself that way and knew she never would. She was an ordinary, regular person. A North Carolina farm girl at heart.

She often wore her brunette hair in a long braid, and had since she was eight years old. It used to look tomboyish, but now
it was supposed to be big-city cool. She guessed she’d finally caught up with the times. The only makeup she ever wore was
a little mascara and sometimes lipstick. Today she wore neither. She definitely didn’t look breathtaking.

Sitting there on the top deck, she remembered a favorite line from the movie
The African Queen:
“Head up, chin out, hair blowing in the wind, the living picture of the hero-eyne,” Bogart had teased Hepburn. It cheered
her a bit—a
titch,
as her mother liked to say back home in Asheboro.

She had been crying for hours, and her eyes were puffy. The night before, the man she had loved suddenly and inexplicably
ended their relationship. She’d been completely sucker punched. She hadn’t seen it coming. It almost didn’t seem possible
that Matt had left her.

Damn him! How could he? Had he been lying to me all this time—months and months? Of course he had! The bastard. The total
creep.

She wanted to think about Matt, about what had happened to separate them, but she wound up thinking of times they’d shared,
mostly good times.

Begrudgingly, she had to admit that she had always been able to talk to him freely and easily about anything. She could talk
to Matt the way she talked to her women friends. Even her girlfriends, who could be catty and generally had terrible luck
with men, liked Matt.
So what happened between us?
That’s what she desperately wanted to know.

He
was
thoughtful—at least he
had been.
Her birthday was in June, and he had sent her a single rose every day of what he called “your birthday month.” He always
seemed to notice whether he’d seen her in a certain blouse or sweater before, her shoes, her moods—the good, the bad, and
occasionally the stressed-out ugly.

He liked a lot of the same things Katie did, or so he said.
Ally McBeal, The Practice, Memories of a Geisha, The Girl with the Pearl Earring.
Dinner,
then
drinks at the bar at One if by Land, Two if by Sea. Waterloo in the West Village; Coup in the East; Bubby’s on Hudson Street.
Foreign movies at the Lincoln Plaza Cinema. Vintage black-and-white photos, oil paintings that they found at flea markets.
Trips to NoLita (North of Little Italy) and Williamsburg (the new SoHo).

He went to church with her on Sundays, where she taught a Bible class of preschoolers. They both treasured Sunday afternoons
at her apartment—with Katie reading the
Times
from cover to cover, and Matt revising his poems, which he spread out on her bed and on the bedroom floor and even on the
butcher-block kitchen table.

Tracy Chapman or Macy Gray, maybe Sarah Vaughan, would be playing softly in the background. Delicious. Perfect in every way.

He made her feel at peace with herself, completed her circle, did
something
that was good and right. No one else had ever made her feel that way before. Completely, blissfully at peace.

What could beat being in love with Matt?

Nothing that Katie knew of.

One night they had stopped at a little juke bar on Avenue A. They danced, and Matt sang “All Shook Up” in her ear, doing a
funny but improbably good Elvis impersonation. Then Matt did an even better Al Green, which completely blew her away.

She had wanted to be with him all the time.
Corny, but true.

When he was away on Martha’s Vineyard, where he lived and worked, they would talk for hours every night on the phone—or send
each other funny e-mail. They called it their “long-distance love affair.” He had always stopped Katie from actually visiting
him on the Vineyard, though. Maybe
that
should have been her early-warning signal?

Somehow, it had worked — for eleven glorious months that seemed to go by in an instant. Katie had expected him to propose
soon. She was sure of it. She had even told her mother. But, of course, she had been so wrong that it was pathetic. She felt
like a fool—and she hated herself for it.

How could she have been so stupefyingly wrong about him? About everything? It wasn’t like her to be this out of touch with
her instincts. They were usually
good;
she was
smart;
she didn’t do really
dumb things.

Until now. And, boy, had she made a doozy of a mistake this time.

Katie suddenly realized that she was sobbing and that everyone around her on the deck of the boat was staring at her.

“I’m sorry,” she said, and motioned for them to please look away. She blushed. She was embarrassed and felt like such an idiot.
“I’m okay.”

But she wasn’t okay.

Katie had never been so hurt in her life. Nothing came close to this. She had lost the only man she had ever loved; God, how
she loved Matt.

K
ATIE COULDN ’T
bear to go in to work that day. She couldn’t face the people at her office. Or even strangers on a city bus. She’d gotten
enough curious looks on the boat to last a lifetime.

When she got back to her apartment after her trip on the Circle Line, a package was propped up against the front door.

She thought it was a manuscript from the office. She cursed work under her breath. Couldn’t they leave her alone for a single
day? She was entitled to a personal day now and then. God, she worked so hard for them. They knew how passionate she was about
her books. They knew how much Katie cared.

She was a senior editor at a highly thought of, collegial, very pleasant New York publishing house that specialized in literary
novels and poetry. She loved her job. It was where she had met Matt. She had enthusiastically bought his first volume of poetry
from a small literary agency in Boston about a year before.

The two of them hit it off right away,
really
hit it off.

Just weeks later they had fallen in love—or so she had believed with her heart, soul, body, mind, woman’s intuition.

How could she have been so wrong? What had happened? Why?

As she reached down for the package, she recognized the handwriting.
It was Matt’s.
There was no doubt about it.

She wanted to hurl the package away with all the power and strength in her body, and nearly dropped it.