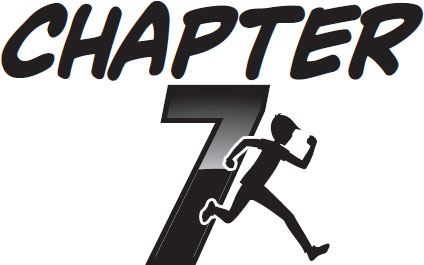 For the second time that day, Zac found himself soaring high above the Murky Swamp. Voler’s Laser Orb was surprisingly fast, and not easy to hold onto. Zac’s arms quickly got tired, and a couple of times he almost lost his grip.

The Orb zoomed through the air, guiding Zac past more and more of the same endless swamp. But there was still no sign of the plastic toad with the DSD inside.

This place is massive,
thought Zac.
Those blueprints could be anywhere!

Zac looked back over his shoulder. Caz was beneath him, sitting aboard a shiny orange hovercraft!

That must be one of the vehicles that Voler left for us to find,
Zac realised.

The hovercraft tore across the swamp, bucking and bouncing, sending an enormous spray of water out behind it.

Caz looked up and saw Zac hovering above her. She shot him a look of pure hatred. But she seemed to decide that Zac was heading in the right direction. Caz brought the hovercraft around, ready to chase after Zac.

But Zac was moving too quickly for her. The Laser Orb kept on pulling him through the air, and before long Caz was just a speck in the distance.

Still clinging to the Orb, Zac craned his neck to look up at his watch.

In just over three hours, Voler’s jet would fly away and Zac would be stranded in the swamp. And who knew where this flying ball was taking him? Zac began to wonder whether he should just let go of the Orb and continue his search back on the ground.

But the Orb had other ideas.

Suddenly, the Laser Orb took a sharp turn to the right. Zac’s left hand slipped off the Orb and he had to scramble to get his grip back.

Now Zac could see the end of the swamp coming into view below him. Tall trees grew up from the mud like a green wall, all along the water’s edge. With a jolt, Zac felt the Orb begin flying downwards. It was coming in to land.

Zac flew lower and lower, until his feet were almost touching the surface of the water. The Orb reached the swamp’s edge and came to a stop between two trees.

I guess I’m here,
thought Zac, dropping to the ground.
Wherever ‘here’ is.

As soon as Zac let go of the Orb, it whizzed up into the sky and flew away.

Zac pulled out Voler’s clues again. The last card was all dark except for a white rectangle. He started walking through the trees, looking for anything that might be a good match.

Walking deeper into the forest, Zac saw a shape that looked darker than the trees around it. He walked over for a closer look. It was the entrance to a big stony cave. Zac’s spy senses tingled.

He switched on his SpyPad’s torch and stepped inside.

Zac’s torch wasn’t the only light in the cave. Further inside the cave, something else was glowing.

Zac headed in the direction of the light.
Is there someone else in here?
he wondered. Surely there was no way Caz could have overtaken him!

Zac rounded a corner and finally found the source of the light. It was an enormous computer screen showing a map of the Murky Swamp.

Ah,
Zac thought to himself.
The screen must be the white square on the clue card.

The map on the screen was black and white – except for one little island that was glowing bright red. 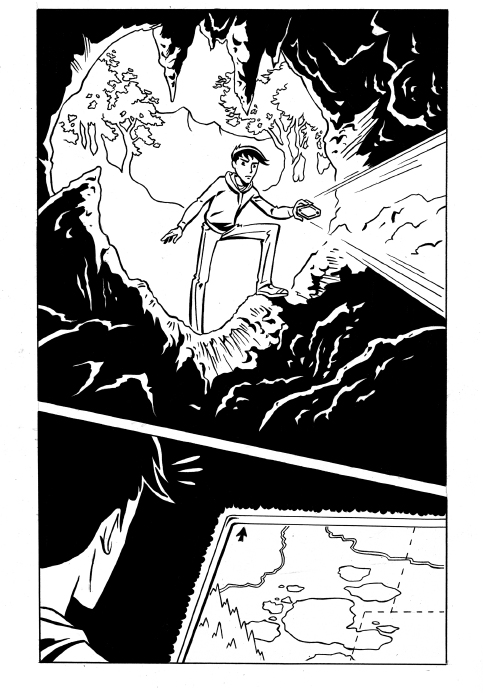 That must be where the X-Beam blueprints are hidden!
Zac realised. He quickly pulled out his SpyPad and carefully snapped a photo of the map. But then a sudden noise from outside broke his concentration.

Back out in the swamp, someone had just let out a terrified, ear-splitting scream. 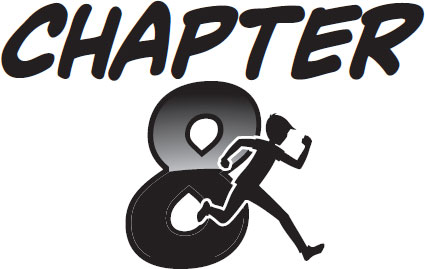 Zac raced out of the cave and back towards the swamp. He reached the edge of the water and saw right away who had been screaming.

It was Caz. She was standing aboard her little hovercraft, cracking her Electromagnetic Whip at a massive crocodile.

Caz brought the whip down again and again, sending sparks flying. But the crocodile didn’t even seem to notice that it was being hit.

The hovercraft rocked back and forth, and Zac could see that it was only a matter of time before the croc knocked Caz right into the water.

Zac sighed. He knew what he had to do.

He jumped back into the swamp and began wading out.
Towards
the crocodile.

But as he got closer, he realised that it wasn’t a real crocodile at all. Instead of scales, the croc was covered in grey steel plating. Instead of eyes, two red lights blinked menacingly in Caz’s direction.

It was a robotic crocodile! It must have been planted there by Professor Voler.

As if the real animals in this place aren’t bad enough!
thought Zac, remembering the eel.

He crept up behind the robocodile, trying to keep from being seen. Zac remembered something he’d seen on Leon’s favourite nature show,
Creepy Creatures.

Zac leapt up onto the robocodile’s back, just as it took another lunge at Caz.

The robocodile’s mouth snapped shut. Zac grabbed onto the closed jaws and held on tight.

For a second he thought his plan had worked. But then the robocodile snapped its mouth open again, flipped Zac over and threw him into the swamp.

I guess that rule only works for real crocodiles,
thought Zac, getting to his feet. He decided to switch on his Electro-Armour just to be safe.

Caz cowered on the hovercraft, but the robocodile had already started swimming towards Zac.

Zac turned and ran through the shallow water, but his feet kept slipping into the mud, slowing him down. In seconds, the robocodile was right on top of him. It stretched its mouth wide. Looking up, Zac saw row after row of razor-sharp steel teeth.

Uh-oh,
he thought, trying to dart out of the way. But the robocodile lunged right for him. Its mechanical jaws came down on top of Zac, right across his chest.

Luckily, Zac’s arms were up in the air, and the robocodile’s metal teeth crunched down hard on his Electro-Armour.

The armour sent a surge of electricity into the robocodile’s mouth. The croc shot up into the air, twisting and sparking. Zac could see that its systems had been fried instantly. 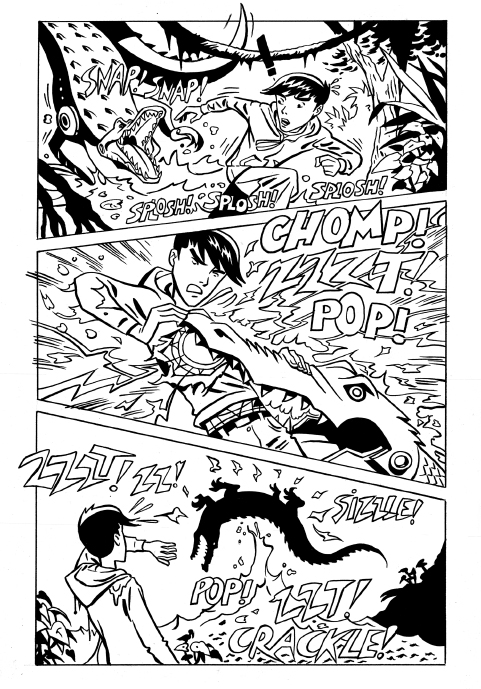 Zac dived out of the way as the robocodile came crashing into the water, completely destroyed.

Zac stood up and paddled over to Caz’s hovercraft.

‘I thought you were done for,’ said Caz, sounding almost disappointed that the croc hadn’t finished him off. ‘He bit you straight across the chest! How’d you survive that?’

Zac lifted up his shirt to reveal the Electro-Armour hiding underneath.

‘I wouldn’t be complaining if I were you,’ said Zac. ‘This armour just saved your life!’

But when Zac looked down and saw the time, he knew it wasn’t going to be that simple.

There were only two hours left! He cringed as he realised what he was going to have to do next.

‘I know where the plastic toad is hidden,’ said Zac. ‘But we’re going to have to go together.’

‘I’m not going anywhere with you, Rock Star,’ Caz growled.

‘You think
I
want to be stuck with
you
?’ said Zac. ‘In two hours, Voler’s going to fly off and leave us both behind. You can’t even stay alive in the
daytime
without my help. Do you really want to be stuck here at night?’

‘No-one
asked
you to help me,’ Caz spat. ‘I had it all under control.’

Caz glared at Zac, but was silent.

‘Look,’ Zac said, trying to keep calm. ‘You’ve got the hovercraft, but no idea where the plastic toad is. I’ve got a map to the plastic toad but no way to get there. The only way we can get out of here is if we work together.’

Caz stared at him, weighing up her options. Then she let out a groan of disgust.