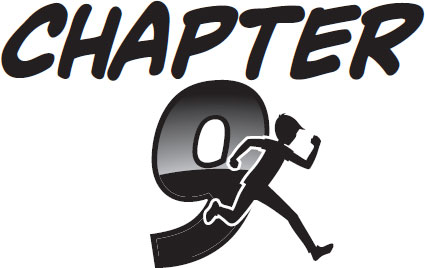 The hovercraft tore across the surface of the swamp, towards the island where the X-Beam blueprints were hidden.

Even though it was Zac who knew the way to the island, Caz had refused to let him drive. So Zac sat looking over Caz’s shoulder, shouting directions over the roar of the engine. He kept his SpyPad hidden in his pocket, and only checked the map when he was sure Caz wasn’t looking.

Apart from that, they kept silent.

They may have been working together now, but they both knew that their agreement would be over as soon as they stepped off the hovercraft.

Even now, sitting behind Caz, Zac was half-tempted to shove her overboard and drive off without her. But he sighed instead and checked the time.

Everything looked so different from the ground. It was hard to figure out which way they were supposed to be going.

But then he saw it. Up ahead was an island of mud with two big trees knocked down and arranged into the shape of an X.

X marks the spot,
thought Zac. This had to be it.

‘Over there!’ he called.

Caz guided the hovercraft over to the island and brought it to a stop.

Zac stood up and reached for his SpyPad, ready to check the map one last time.

Caz lashed Zac across the back with her whip. Zac’s Electro-Armour sparked and kept him from getting hurt, but the impact was enough to send him staggering overboard.

Zac got to his feet and clambered up onto the island, right behind Caz.

Zac, meanwhile, headed straight for the centre of the X-shape made by the fallen trees. He found a patch of long, brown grass and started digging through it.

His hand caught on something that was sticking up out of the ground. Brushing the grass aside, Zac saw that it was a rusty metal lever. He took a deep breath and pulled.

Caz ran over and shoved Zac aside, knocking him to the ground. She grabbed the lever for herself and started heaving at it with all her might.

Zac scrambled to his feet and tried to pry Caz’s hands off the handle.

‘Get off, Rock Star!’ growled Caz. ‘Those blueprints are
mine.’

Both of them were holding onto the handle now, trying to shove each other away and pull on the lever at the same time.

Slowly the lever started to shift.

They dragged it up and over, until it was pointing away in the opposite direction.

For a moment, nothing happened. 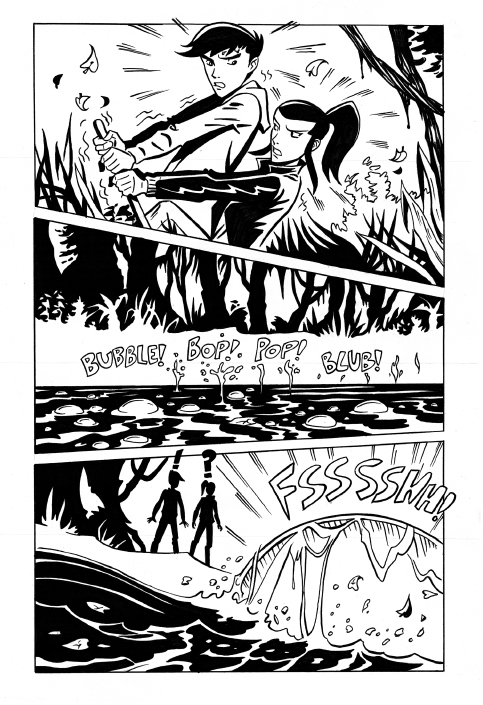 Zac and Caz let go of the lever and stepped apart from each other.

Then, a few metres away, the swamp started to bubble and churn. A strange clattering sound came up from under the water. Then something big and round started rising slowly up out of the swamp.

At first, the thing was so covered in mud that they couldn’t see what it was. But then the mud started dripping back down into the swamp, revealing a big glass dome.

Inside the dome, sitting on top of a stone platform, was a neatly folded Chopper Suit. It was just like the one that Zac had used to board Voler’s jet that morning.

Walking to the edge of the island for a closer look, Zac noticed something else sitting on the platform.

It was a small plastic toad. The blueprints must be hidden inside!

Zac glanced at Caz. She had seen it, too.

But before either of them could react, they were distracted by another sound.

Someone was coming down out of the sky towards them, wearing a Chopper Suit. It was Professor Voler.

Voler touched down on the island and looked from Zac to Caz.

‘Well, well,’ he said with a grin. ‘A GIB agent and a BIG agent working together! I never thought I’d see the day.’ 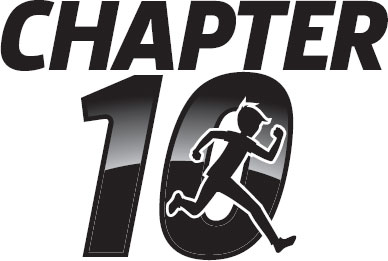 ‘Working together?’ Caz laughed. ‘I was only using him to get to the blueprints!’

Zac’s eyes were fixed on Voler. The professor tapped at the controls on his sleeve, and the helicopter blades folded back into his Chopper Suit.

‘Please don’t let me interrupt,’ said Voler, grinning at the two of them. ‘I just thought I’d come down here for a closer view of the big finish.’

Zac’s eyes flashed across to the dome in the swamp. The glass was splitting apart. He leapt into the water and splashed towards the dome, with Caz right behind him.

Zac and Caz reached the dome at the same time and dived for the plastic toad. They crashed down onto the platform, hands grabbing wildly.

Zac felt his fingers close around the toad.
Yes!

Caz barrelled into Zac and they tumbled into the water. Zac wriggled free of her and made his way back up onto the island.

He slipped the plastic toad into his pocket, right next to his SpyPad. Looking back over his shoulder, he saw Caz climbing up out of the water.

Then Zac realised his mistake. He may have got his hands on the plastic toad, but Caz had taken the spare Chopper Suit.

‘Well now, this
is
an interesting twist!’ said Voler, smiling at Zac. ‘You’ve tracked down my X-Beam blueprints, but now you’ve got no way of escaping the swamp.’

‘And
you’ve
got the Chopper Suit, but no blueprints,’ he said. ‘How do you suppose you’re going to –?’

In a flash, Caz had switched on her Electromagnetic Whip and cracked it at Voler. The cord of electricity struck the big round ‘REMOVE’ button on the chest of his Chopper Suit.

The Chopper Suit popped right off Voler and landed in a crumpled heap in the grass. Caz reached down and grabbed the suit before Voler had time to react.

‘Wait!’ said Voler, looking furious. ‘You can’t do that! It’s not in the rules!’

Voler shot Caz a dangerous look. But Caz waved her whip at him and he backed off. Then she walked across to Zac, carrying the two Chopper Suits.

‘Here’s the deal,’ she said.‘You hand over the toad and I give you one of these suits.’

Zac looked across at Voler, who was staring angrily at them. Zac had just remembered something and he was sure Caz wouldn’t like it!

Fighting the urge to grin, he looked back at Caz and sighed loudly.

‘I guess giving up the plastic toad is the only way I’m going to get out of here,’ he said, shrugging. ‘OK, it’s a deal.’

He pulled the toad from his pocket and handed it to Caz. Then he grabbed one of her Chopper Suits and put it on.

‘I hope you two have learnt a lesson today,’ said Caz, slipping into her own Chopper Suit and backing away from them. ‘
Don’t mess with BIG!’

She tapped at the suit’s controls and started rising up into the air. Zac took one last look at Voler and followed her.

But Zac just grinned at her and waved.

Caz stopped mid-air. ‘What are you smiling at?’ she demanded.

‘Nothing,’ said Zac. ‘I’m just thinking of all the awesome stuff I’m going to do with my new X-Beam.’

‘What are you talking about?’ Caz glared, holding up the plastic toad. ‘I’ve got the blueprints right here!’

‘Yeah, about that,’ said Zac.‘When I put the plastic toad in my pocket, my SpyPad wirelessly transmitted the blueprints to GIB HQ! It’s an automatic function.’

Caz stared at him, mouth open.

‘And then it wiped all the data from the DSD,’ added Zac. ‘But don’t worry, I’m sure your boss will find all kinds of useful things to do with a plastic toad!’

Zac spun his Chopper Suit around and flew away, laughing. Caz let out an angry shout and disappeared in the opposite direction. 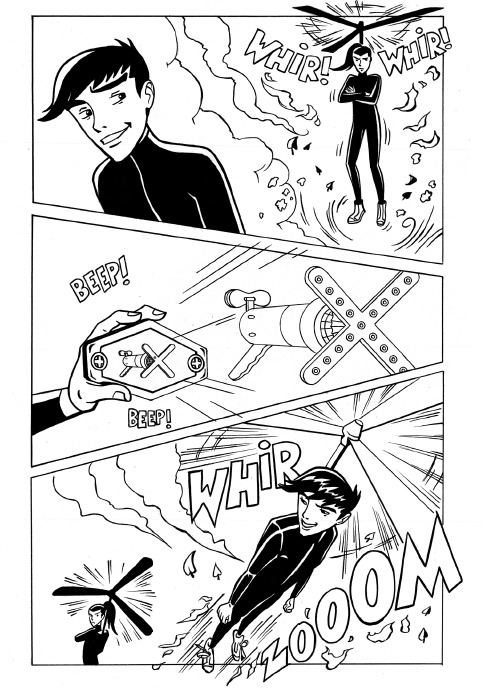 Still chuckling to himself, Zac looked back towards the swamp. He saw Voler’s jet shimmer into view above the island. His bodyguard must have been coming to rescue him.

I don’t think Voler’s game turned out quite according to plan,
Zac thought. Then he felt his SpyPad vibrate in his pocket.

Excellent,
he smirked to himself.
That’s probably HQ calling to congratulate me.

He pulled out the SpyPad. It was Agent Blizzard, the babysitter.

Agent Blizzard grinned in the screen of Zac’s SpyPad. ‘Your parents thought I did such a good job babysitting that they’ve decided to leave me in charge
again
tonight!’

Zac sighed. As if he needed a babysitter!
Well,
he thought,
at least flying home in my new Chopper Suit will be fun.

‘Oh, and I almost forgot,’ said Agent Blizzard. ‘You didn’t finish your chores last night. When you get back, you’ve got some washing to fold!’

Amazon Moon by James A. Haught
In the Absence of Iles by Bill James
A Forever Mate: Vampire Assassin League #18 by Jackie Ivie
A Little Trouble with the Facts by Nina Siegal
Foamers by Justin Kassab
Still Foolin' 'Em by Billy Crystal
Man-Kzin Wars XIV by Larry Niven
Six Years by Harlan Coben
Magic on the Storm by Devon Monk
Slut Lullabies by Gina Frangello