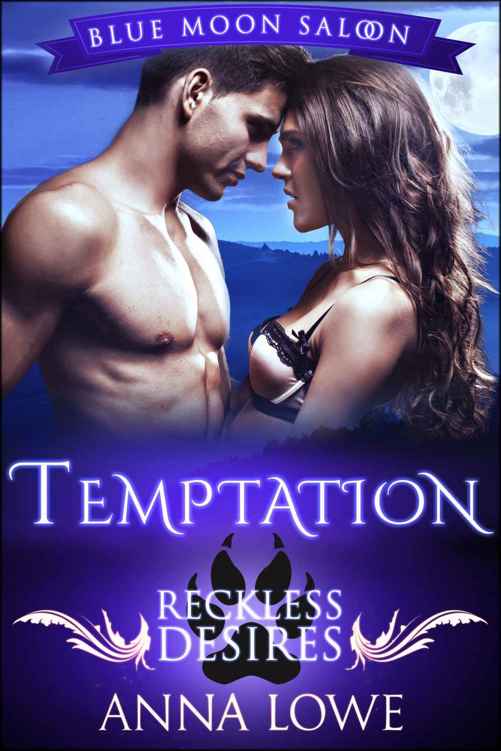 Editing by Lisa A. Hollett

This book or any portion thereof may not be reproduced or used in any manner without the express written permission of the author except for the use of brief quotations in articles or reviews.

This is a work of fiction. Any resemblance to actual persons is purely coincidental.

Other books in this series
Blue Moon Saloon

Perfection
(a short story prequel to the series)

The Wolves of Twin Moon Ranch

Gambling on Her Dragon
(A paranormal romance with a zany twist)

Get your free e-books now!

Sign up for Anna’s newsletter at
annalowebooks.com
to get three free books!

In the darkest corner of an alpha’s broken heart, fate ignites a flicker of hope. From lusty wolves and burly bears to decadent dragons, these alphas hunger for inner peace which can only come from finding their perfect mate. Seven best-selling authors each bring you a series of standalone books filled with redemption, love, and reckless desire — not to mention a whole lot of primal growling as these alpha heroes claim their fated mates.

She-wolf Janna Macks knows trouble when she sees it, especially when it comes in the form of an irresistibly broody cowboy like Cole Harper. Her fledgling pack is already in the cross hairs of a ruthless group of rogues, and falling head over heels in lust with a human will only endanger her loved ones more. The problem is, her wolf knows her destined mate when she sees him — and Cole is it.

Rodeo pro Cole Harper has never felt this off-kilter before. One minute, he’s lusting after Janna, the spunky waitress he can’t get off his mind, and the next, he’s growling at a dark inner voice demanding all kinds of crazy things — like howling at the moon and claiming Janna as his own. There’s only one thing stronger than the overwhelming need for Janna, and that’s the fear that without her, he’ll succumb to the strange inner beast wrestling for control of his haunted soul.

Before we start... Be sure to
sign up for my newsletter
– you’ll get three free stories right away, and you’ll be the first to hear about new releases, special deals, and exclusive bonus content.

Cole Harper stood before the swinging saloon doors for a good minute. Maybe two. The sun had set, and the air had that crisp, cool quality it only got in high-altitude Arizona and only on spring evenings, when everything felt fresh and budding and new.

Sounds and smells from the saloon clawed at his shoulders, begging him to come in. Laughter rang out and chairs scraped along the floor. Country music poured from the jukebox, and a couple was starting to dance. The bartender thunked down an empty glass, poured a shot of Jack Daniel’s, and slid it all the way down the bar.

All that, he got without looking, just listening. Christ. What was wrong with him?

Cole kept his thumbs hooked in his jeans and hunched his shoulders, trying to resist the urge.

Scents assaulted him, one after another in a thousand little punches. The peaty scent of aged whiskey, the charcoal flavor of a malt. The mouthwatering smell of spare ribs smoked over mesquite.

His tongue darted out to lick his lips before he could stop it.

He’d been hearing that inner voice for a while now, and it was driving him nuts, like the itch on his arm. He’d been cut two weeks ago — a little bitty cut sustained in a fight in this very saloon, when he’d come along just in time to stop a couple of thugs from jumping the two waitresses. Unbelievably strong guys with weird, clawing nails he’d managed to avoid, except for that one scratch. His skin had healed now, but the itch remained.

An angry growl built in his throat at the memory of the intruders then faded away when he realized the sound was coming from him and not some passing dog.

Jesus, he was growling, now, too?

He coughed it away. Squaring his shoulders, he pushed the saloon’s doors wide and marched in, letting them swing behind him. He took off his hat, glanced in the mirror next to the sign that read,
Check your guns at the door,
and ran his fingers through the blond hair that curled and feathered to a point somewhere beneath his ears. Then he headed straight for his chair at the end of the bar. A chair some fool was occupying, which made the growl build in his throat again.

My chair. My spot.

The inner voice was ridiculously territorial. He clenched his fists, telling himself he would not pick a fight. Telling himself it didn’t matter who was sitting in which chair.

Except that fool sitting smugly in
his
chair needed to get the hell out. Now.

“Hey, Cole.” A voice like honey stopped him, and his head whipped around. And just like that, the tension strung through his body like a thousand-volt current dissipated. The sights and sounds and smells of the saloon faded away, and he was standing in a mountain meadow. It sure felt like that, anyway.

Janna! Janna!
The growl turned into a joyous inner cry.

She had her hair in two braids today, a perfect match for her bubbly, little-girl energy. Sometimes she wore it down and let it sway around her face like a liquid frame. Other times, she did this complicated braid thing he dreamed of slowly unraveling and running his fingers through. And sometimes, she just wore a ponytail, and he liked that, too.

He liked everything about Janna. A lot. Her laugh, her smile, her way of tilting her head to listen when he whispered in her ear. He’d liked her since the day he’d first set eyes on the freckled spitfire who’d started waitressing in the saloon not too long ago. Janna always had a sunny smile and sparkling eyes and a chipper voice. Her bouncy step and glossy brown hair were just as full of life as the rest of her. She had a way of looking at him as if she could see
into
him, and she didn’t even seem to mind what she found.

He tightened his fingers over his belt and ordered them to stay there. Because
liking
the vivacious waitress had slid right over to
lusting
for her in the past couple of weeks. Like he’d slipped and hit some dial that turned the testosterone up full blast. All he could think of was her. Or rather, him and her. Close. Unbridled. Uncontrolled.

Which didn’t make sense. He’d been there, done that with spunky cowgirl-types who could ride and rope and wrangle. What exactly did Janna have that turned on every switch in a burned-out cowboy like him?

When he could think straight, it scared him.

But he couldn’t think straight around Janna. She was all the girls he’d ever loved, times fifty. Times a hundred. A thousand. She made him imagine all kinds of crazy things, like standing knee-deep in wildflowers in a meadow in spring. A perfect, peaceful place so unlike the reality that had been haunting him these days. The ceiling fan of the saloon that turned in lazy circles became an eagle, wheeling on a Rocky Mountain breeze. As long as Janna was around, he was in heaven.

He clenched his fists against his sides. He was in the Blue Moon Saloon, damn it. And he was not going crazy. Not yet.

“How are you doing today?” she asked, propping her drink tray against her hip.

Not crazy yet,
he nearly said.
But getting closer all the time.
She was the only thing keeping him sane. In the hours he spent alone, he went through the wildest mood swings. One second, he’d be enjoying the scent of leather and horse as he saddled up a ride at the stables where he worked, and the next, he’d be overcome with the bitterest fury, the weirdest urges. Like wanting to run naked at night. Wanting to tip his chin up to the waxing moon hanging over the desert and howl at it. To chase a deer, rip into it with bare teeth, and feast on warm flesh and blood.

A customer walked past, and Janna stepped closer to his side.

God, she smelled nice. Like buttercups and daisies with a trace of forget-me-nots, the blue flowers that were exactly the color of her eyes. All of that blended together in a soothing scent that settled his soul.

He shook his head and looked around, hoping to spot some guy hiding somewhere, throwing his voice. But there was no one. Just the dark, husky voice in his mind that he didn’t trust one bit. What was with the mate nonsense, anyway?