The Apartment: The Complete Affair 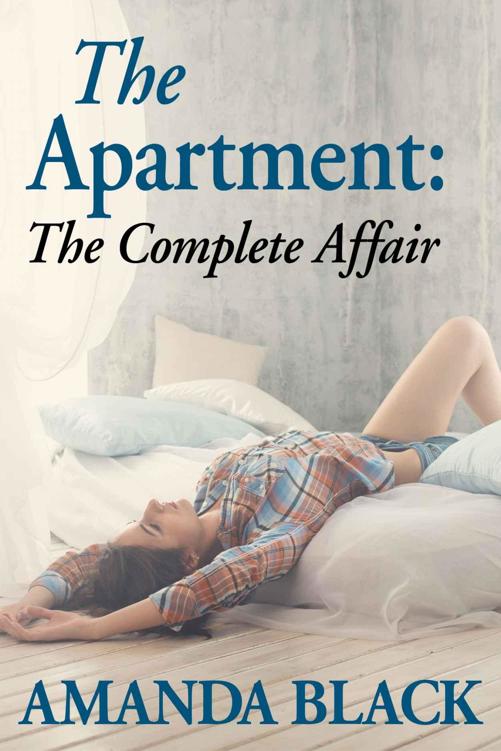 Six Months After That…

“No Dad, I really don’t feel like having deer steaks again tonight. Why don’t you just throw them in the freezer? I’ll cook them this weekend.”

The pretty brunette rolled her eyes, tired of having the same conversation at least once a week. Her father hunted anything for which he could get a license, which meant that their deep freeze was stocked to overflowing with every form of wild game imaginable.

She tapped her pen impatiently on her desk, glancing furtively around her workstation as she listened to the voice on the other end of the phone. She hated drawing attention to herself, and getting caught arguing about dinner with her father while at work always embarrassed her. Just then, a loud beep sounded, and she was happy to see that the front desk was paging her.

“Hold on a sec, Dad—other line.” She left him rambling on about the shelf life of venison and quickly switched lines, hoping for an excuse to get off the phone. “Yes?”

“You have a chart up, Lily,” a female voice replied in a short, clipped tone.

“Don’t be too long. You know how much Dr. Wilde hates for this family to wait.” A loud click signaled that Kim, the consistently rude receptionist, had already hung up, leaving Lily frowning down at the phone.
That’s why I said I’d be right there
.

Remembering that her father was still on hold, she sighed loudly before pressing the flashing button. “Listen, Dad, I need to go. I’ve got a patient. I’m going to the gym after work, so I’ll figure out something else to make when I get home. I should be there no later than six.” She set the receiver back in its cradle before he could interrupt her again. Lily loved her father very much, but there were times when he worked her last nerve.

She made her way quickly from the nurses’ station to the front office, wondering who had gotten Kim’s panties in a twist. There were only a few families in town that Dr. Wilde ever cared about having to wait, so Lily could never resist trying to guess who it might be this time. Was it the judge’s wife? The mayor’s sister?

She sincerely hoped not. Every time the mayor’s sister was there she had to listen to a whole new round of excuses for why she needed another STD test and free samples of Plan B. Normally, Lily would find that responsible, but she knew that it wouldn’t be as necessary if the mayor’s sister didn’t also continually refuse her offers of free condoms.

When she reached the different racks where the charts were stacked in order of doctor and appointment time, Lily saw the bright red sticker on the corner of the chart—the unmistakable code in the office for VIP. Needing two hands to lift the thick chart, Lily flipped it open to reveal whose ass she was supposed to start kissing: Maggie Foster.

Much better than the Mayor’s sister!

Maggie Foster was something of a local celebrity, even if the trashy romance paperbacks she wrote made the elderly people in town shake their heads in disapproval. She hadn’t quite become a household name yet, but she had already sold enough books to make a living. Lily had bought all four of them as soon as they’d hit the bookstore and devoured them immediately upon arriving home. The girl wrote
excellent
smut.

However, that’s not what put that little red sticker on her chart. Maggie had achieved red sticker status more than twelve years earlier, on the day she married Richard Foster’s son. Richard Foster had the largest family practice in all of Mercer County, and since she was always on the lookout for more referrals, Dr. Natalie Wilde never missed an opportunity to brown nose.

Lily propped open the door to the waiting room with her hip, searching with her eyes until they landed on a strikingly beautiful raven-haired woman who was talking quietly with her head bent toward someone seated next to her. “Maggie?” The woman in question stopped and looked up, smiling brightly. She stood eagerly, motioning for the other woman beside her to follow.

“That was fast!” she exclaimed once the door closed behind them. “How have you been, Lily?”

“Oh, you know… same old, same old.” It never failed to amaze her that someone as well known as Maggie Foster actually remembered her name. Since talking about herself always made her feel awkward, Lily quickly deflected the attention back to the patient. “C’mon, let’s get you weighed.”

“Ugh, do we have to?” Maggie pretended to pout as she kicked off her shoes and shrugged out of her jacket, then hesitated momentarily before pulling off her sweater and standing on the large scale. As Lily watched the digital readout and noted the result in Maggie’s chart, the quiet woman who had been all but forgotten behind them finally spoke up.

“Jeez, Maggie, why don’t you take off
all
your clothes? I’m sure you could deduct at least a pound or two for those socks.” Her snarky comment was followed by a playful giggle.

“Hey, shut it! I need all the help I can get right now.” She turned back to Lily and made a grave face. “Okay, what’s the damage?”

Easily adopting Maggie’s dry sense of humor, Lily frowned. “Two pounds since last month’s visit. If you keep this up we’ll need to get a bigger scale.”

“I know.” Maggie tried to hold her dour expression, but she couldn’t keep the radiant smile from breaking out across her face. “Isn’t it glorious?”

Lily smiled back, ushering the two women into an exam room. While she checked Maggie’s temperature with a digital thermometer in her ear, the other woman sitting off to the side cleared her throat loudly.

“I’m sorry, Lily,” Maggie said, finally taking the hint. “This is Emma, my husband’s sister. She was kind enough to keep me company today since Eric is out of town until tomorrow.”

“I thought football season was over, like… two weeks ago?” While Lily was uncomfortable talking about herself, she was actually quite good at getting others to open up. Besides, she knew that Maggie loved to talk, especially about her husband.

“It was, but the team needs to stay in shape during the off-season, not to mention the other clients he takes on during the rest of the year. He’s stuck out in California right now looking at a torn rotator cuff.”

Eric Foster was a physical therapist for the Chicago Bears. After a knee injury permanently benched him before his freshman year of college was over, he combined his love of sports and a familial inclination for medicine to find the best of both worlds. He and Maggie were college sweethearts, and they got married about thirty seconds after graduation. After moving around the country for a few years, he was thrilled when he finally landed the position he’d wanted more than anything, always hoping to stay close to his hometown. They lived in Chicago year-round now, but happily made the three-hour drive home to Aledo as often as possible.

As she checked Maggie’s blood pressure, Lily turned her attention to the newcomer with the sandy blonde pixie cut. She was pretty and polished, with expensive highlights in her hair and designer clothes that Lily couldn’t have afforded with an entire paycheck, but something about the warmth of her smile made Lily feel at ease. She decided to return the favor and finally include her in the conversation.

“So, Emma… I don’t remember seeing you in here before. You aren’t a patient of Dr. Wilde’s? I thought all of the Foster women came here.” The town of Aledo, Illinois was small, and Lily worked at the largest private OB/GYN around. They had also recently added a young gynecologist to the staff, which had nearly doubled their clientele.

It didn’t hurt that Dr. Jason Adams, or Jason as he preferred to be called, was extremely easy on the eyes, either. The rate of lonely single women scheduling pelvic exams had skyrocketed over the last few months.

“No,” Emma replied. “Just my mom and Maggie here. I don’t get back to town as often as she does, so I have a doctor in Chicago.”

“Emma’s husband, Brandon, owns his own construction company in the city, and Emma is a freelance interior designer,” Maggie explained. “Really, Emma, you only go for your annual exam. There’s no reason you can’t make it here once a year.” Maggie looked back to Lily. “I’ve been trying to get her to switch for months. Dr. Wilde is worth the trip.”

“Well, I’m sure she’d love to hear that,” Lily said with a smile and a quick nod. She sat down at the small table and made a few more notes in Maggie’s chart. “Alright, how have you been feeling?”

“Great!” Maggie answered with a beaming smile. “Really great, actually. Better than I thought I’d be.”

“No, not for weeks now.” Maggie shook her head as she replied, causing her long, silky tresses to fall in shiny black waves around her shoulders. Lily couldn’t help wondering what ungodly expensive endangered animal placenta it took to keep her hair that lustrous.

“Are you having any trouble with your Lovenox injections?” Lily scribbled on the sheet as she spoke, never looking up from the paper.