The Ballad of Frankie Silver 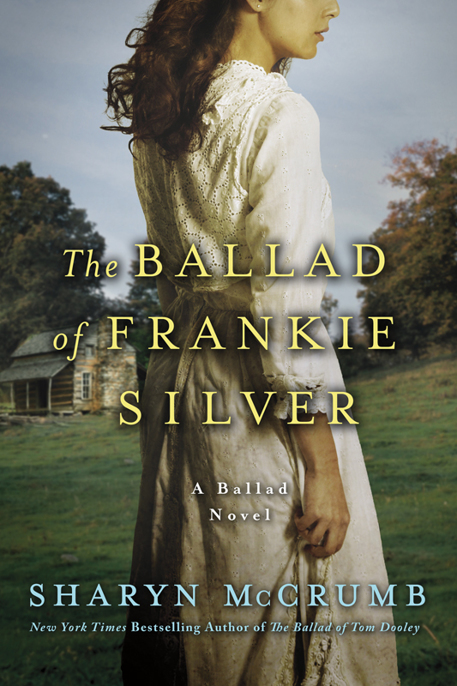 THERE WERE THREE FACETS

TO THE STORY OF FRANKIE SILVER.

THIS BOOK IS DEDICATED WITH THANKS

TO MY GUIDES ON THOSE THREE ROADS:

“The Ballad of Frankie Silver”

only the poor and friendless.

for the murder of the

The Ballad of Frankie Silver

This dreadful, dark and dismal day

Has swept my glories all away;

My sun goes down, my days are past,

And I must leave this world at last.

Oh! Lord, what will become of me?

I am condemned, you all now see;

To heaven or hell my soul must fly,

All in a moment when I die.

Judge Donnell my sentence has passed,

These prison walls I leave at last;

Nothing to cheer my drooping head

Until I’m numbered with the dead.

But Oh! That awful judge I fear,

Shall I that awful sentence hear:

“Depart, ye cursed, down to hell

And forever there to dwell.”

Gnawing their flesh in misery;

And then and there attended be

For murder in the first degree.

Then shall I meet that mournful face,

Whose blood I spilled upon this place;

With flaming eyes to me he’ll say,

“Why did you take my life away?”

His feeble hands fell gently down,

To see his soul and body part

It strikes with terror in my heart.

I took his blooming days away,

Left him no time to God to pray;

And if sins fall upon his head,

Must I not bear them in his stead?

To make me take my husband’s life,

For months and days I spent my time

Thinking how to commit this crime.

And on a dark and doleful night

I put the body out of sight,

With flames I tried to him consume,

But time would not admit it done.

You all see me and on me gaze,

Be careful how you spend your days;

And never commit this awful crime,

But try to serve your God in time.

My mind on solemn subjects rolls,

All you that are of Adam’s race,

Let not my faults this child disgrace.

What my bad conduct’s brought on me;

To die of shame and disgrace

Before the world of human race.

Awful indeed to think of death,

In perfect health to lose my breath;

Farewell my friends, I bid adieu,

Vengeance on me you must now pursue.

Great God! How shall I be forgiven?

But little time to pray to God,

For now I try that awful road.

A rumor was prevalent in Burke County that Silver wrote some verses which were tantamount to a confession of her guilt and read them while on the scaffold to the surrounding throng just before she was executed.

The mind of Squire Waits A. Cook, a highly respected justice of the peace in the Enola section, was a veritable storehouse of legends and events of Burke County’s earlier days. He told me that the verses Frankie had allegedly written were composed by a Methodist minister whose surname was Stacy.

“I want to show you a grave,” the sheriff said.

Three rocks stood alone in the little mountain graveyard: smooth stubs of granite, evenly spaced about four feet apart. The stone pillars were uncarved, weathered from more than a century’s exposure to the elements and farthest away from the white steepled church in the clearing at the top of the mountain.

Tennessee deputy sheriff Spencer Arrowood wondered why Nelse Miller had made a detour up a corkscrew mountain road to stop in this country churchyard. He could see nothing out of the ordinary about the old white frame church or the surrounding array of tombstones, ranging from newly carved blocks of shining granite to older markers, tilted askew in the dark earth, scarcely readable anymore. Nearly every burying ground had stones like these.

It was pretty enough up here, Spencer allowed. The view of Celo Mountain across the valley and the blue haze of more distant peaks beyond made a fine sight on a summer morning, but Sheriff Miller wasn’t much on admiring scenery no matter how magnificent the vistas before them. He barely glanced at the view. On a hot summer day like this, Nelse was more likely to be in search of a cold drink and a shade tree, and in truth Spencer Arrowood would have preferred such a rest stop to this peculiar excursion to a little mountaintop graveyard. He was twenty-four, and impatience was pretty much a permanent state of mind for him. They could have stopped in the store in Red Hill instead of heading off up Route 80, past Bandana, North Carolina, and up another couple of elliptical miles that spiraled to nowhere. Or they could have headed back across the Tennessee line to Hamelin and got on with the day’s work. Spencer was still new enough at the post of deputy sheriff to relish every hour of duty, every moment of patrol in his shiny new ’74 Dodge. Much as he respected the old sheriff, he often found himself impatient with Nelse Miller’s unhurried serenity. The sheriff, in turn, sometimes seemed to be amused by his eager young deputy, as if he were a new puppy barking at sunbeams.

Spencer looked at his watch. Nearly noon. This old cemetery couldn’t have anything to do with business. They were still on the North Carolina side of the mountains, at the Dayton Bend in the Toe River, according to the map. Just over the state line the Toe River would change its name to the Nolichucky and the two sightseers would change into peace officers on duty instead of idlers looking at golden hills on a pleasant summer day.

Their morning’s errand had been the delivery of a fugitive to the jail in Bakersville, a little courtesy exchange between peace officers on different sides of the state line. The prisoner hadn’t been much in the way of a felon—a car thief, barely old enough to register for the draft. Since he had sobered up after a night in a Tennessee jail cell, the boy had seemed overwhelmed by the consequences of his joy ride. He had wrecked the car in a high-speed chase, and had come out bruised but otherwise uninjured. “God protects fools and drunks,” Nelse Miller declared, with some disgust.

The prisoner was handcuffed and shackled in the back of a patrol car, filthy, unshaven, and fighting back tears of panic. The two officers transporting him were not ungentle, but their lack of interest in his predicament was evident.

“What’s going to happen to me now?” the young man kept asking.

“You’re going to the jail in Bakersville,” Nelse Miller had told him. “And after that, we’re done with you.”

They had delivered the prisoner to the Mitchell County sheriff at ten o’clock, and Sheriff Miller proceeded to spend the next hour drinking coffee and swapping stories with his North Carolina counterpart while Spencer curbed his own thirst and impatience, and smiled at the yarns as if he had not heard them a dozen times before. Finally Sheriff Miller conceded that the prisoner exchange had taken up enough of Tennessee government time. He signaled for Spencer to bring the patrol car around. Nelse Miller seldom did his own driving, a trait that bewildered his young deputy, who thought that driving a cop car was the only childhood dream that had lived up to his expectations.

As Spencer slid behind the wheel of the new Dodge, he felt his impatience slip away. He left the courthouse square of Bakersville, dutifully following Sheriff Miller’s directions, taking the twists and turns of North Carolina’s back roads, while he wondered just what the old fox was up to this time. He didn’t like to ask, though. Nelse Miller had his own way of doing things, and Spencer found that it was usually better to wait him out. Explanations would come at the proper time and place.

Now the deputy stood in the clear mountain sunshine, gazing respectfully at three slabs of quarried stone, as he waited for further enlightenment.

Finally Nelse Miller said: “I come up here when I want to remember why I came into police work. That little piece of trouble we just transported to Bakersville made me feel more like a baby-sitter than a lawman.”

Spencer looked around at the peaceful scenery, wondering why Nelse had picked this place for inspiration. He knew the Millers were from this county originally, though. “Family cemetery?” he asked, though he didn’t see any headstones marked “Miller.”

The sheriff shook his head. “These aren’t my people.” He pointed to the uncarved markers. “Charlie Silver is buried here. He was a murder victim, a hundred and fifty years back. His wife killed him. Leastways they said she did. You ever hear the story of Frankie Silver?”

“Not in detail,” said Spencer. “People mention it every now and then. It’s like Tom Dooley, isn’t it? More legend than fact. With a tune.”

The sheriff smiled. “‘Tom Dooley’ is a catchy folk song, I reckon, but the inspiration for it—Tom Dula—was real, all right. They hanged him over in Statesville in May of 1868, and good riddance to him. Everybody has heard about him, but they don’t know what pox-ridden trifling pond scum he was. Too bad he survived the war. Tom Dooley’s story pales beside that of Frankie Silver. I always thought it strange that not too many people outside these mountains have heard about Frankie Silver, while Tom Dooley is a household word.”

“But Frankie Silver—there’s a
story
!” Nelse Miller pointed toward the edge of the churchyard where a thicket of bushes sloped down into a dense forest of beech and oak trees. “Eighteen years old—that’s all she was. The Silvers’ cabin was back in those woods a couple of hundred yards. That’s where it happened. The cabin was burned years ago, and the site is all overgrown now with briers and underbrush, but we could go take a look at it if you want.”

“I’m not familiar with the case,” said Spencer. “Just heard the name, that’s all.”

“My people were from up around here, so I cut my teeth on that old story. I think it’s the real reason I became a lawman. I remember as a kid hearing my granddaddy tell that tale, and wishing I could have been there to investigate the crime. I always wanted to know
who
and
why.
I still do. I thought I would solve the Silver case when I grew up. Thought if I could just learn enough about criminal investigation, I could figure out the truth.”

“Never did. I understand some of what happened and why. But not all of it. Not that last secret that she took to her grave.”

“Maybe I’ll look into it sometime,” said Spencer. “Is there a book about the Silver case?”

“Not that I ever saw. I’ve fiddled with the notion of writing one myself, except that I’m not much on paperwork. I take a proprietary interest in Frankie Silver, though. It’s a hell of a story, Spencer. Starting right here. Starting with old Charlie Silver’s grave.”

Enough Of The Drama by Dotson, P.
The Purity of Vengeance by Jussi Adler-Olsen
Time Loves a Hero by Allen Steele
Power of Three by Diana Wynne Jones
Beauty and the Mustache by Penny Reid
Kiss in the Dark by Marcia Lynn McClure
Return To The Bear by T.S. Joyce
Hellblazer 2 - Subterranean by John Shirley
Suckers Bite Back (San Francisco Vampires #5) (Vampires of San Francisco series) by Jessica McBrayer
Murder on the Riviera by Anisa Claire West