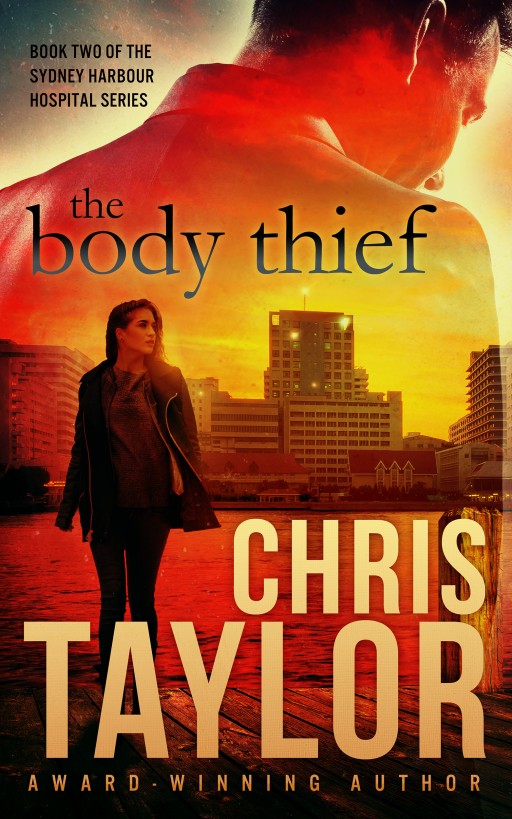 This ebook is licensed for your personal
enjoyment only and may not be re-sold or given away to other
people. The scanning, uploading, and distribution of this book via
the Internet or via any other means without the permission of the
publisher is illegal and punishable by law. Please purchase only
authorized electronic editions, and do not participate in or
encourage electronic piracy of copyrighted materials. Your support
of the author’s rights is appreciated.

The Body Thief
is a work of fiction. Names, characters, places,
brands, media and incidents either are the product of the author’s
imagination or are used fictitiously. Any resemblance to actual
persons, living or dead, events, or locales, is entirely
coincidental.

This book is dedicated to my mother Sophia
Guihot and as always, to my beautiful husband, Linden.

Sign up for my newsletter and keep up to date
with new release dates, exclusive content and other offers at:
http://www.christaylorauthor.com.au/subscribe-to-our-newsletter/

Find out more about all of Chris Taylor’s
books, including the hugely popular Munro Family series by visiting
her website at:
http://www.christaylorauthor.com.au/about/books

He lies prostrate on the operating table,
his skin still warm and pink. Even the intricate tattoo on his
shoulder with the letters P and M interwoven around a cherub looks
plump and firm. The respirator is doing its job.

His chest has been cut open to reveal the
treasure trove within. I am more than certain he’s had a heart
attack, so that organ must remain intact, but everything else can
go.

His family said he wasn’t a donor, were
adamant he didn’t want to be one, but I can’t listen. Surely, such
a man would approve this final gesture. I cannot bear to see his
healthy organs go to waste. So many people will benefit from his
kind and generous gift. And he’s dead, really. Who’s to say he
wouldn’t have changed his mind at the last minute and been
generous, if he’d lived?

I block my mind to what I know were his
wishes and once again pick up my scalpel. Quickly and efficiently,
I do what I do best. With each slice, I’m saving lives and
furthering the cause, one lucky person at a time. It’s a shame I am
forced to work in secrecy and that my work is outside the laws
here. How I would love for people to know who I am and what I do
for so many others—and not the least among them, my family…

Doctor Samantha Wolfe bent over the corpse
that lay stretched out on the steel gurney before her. The work
station was one of twenty that lined the main autopsy room of the
Department of Forensic Medicine, situated in Glebe, an inner city
suburb of Sydney. It was the biggest and busiest mortuary in
Australia and carried out the post mortems resulting from all major
disasters. Most locals referred to the drab concrete-and-steel
building simply as the Glebe Morgue.

Adjusting her safety glasses and mask,
Samantha picked up the Stryker saw and cut through the woman’s
ribs. The saw squealed in protest, but did its usual efficient job.
When she finished, she set the saw aside and with gloved hands,
prised open the chest cavity.

“What do you have there, Sam?” Phillip Bond
asked from where he stood beside the gurney adjacent to hers. His
tone was conversational as he made preparations to begin the post
mortem on the body of a black male that lay on the table in front
of him.

Sam looked up and grimaced. “The paperwork
says a suspected heart attack. She’s only forty-eight. She’s
overweight, but not to the point of obesity. Even if it is a heart
attack, I’ll be doing some toxicology work just to rule out foul
play. Thankfully most of us aren’t that young when the heart
decides to go.”

Phillip chuckled and made a Y incision on
his corpse. “I suppose we can be grateful for that. Every day
brings us closer to the time when we’ll reach the end. Let’s hope
we die peacefully of some immediately discernible cause.” He
shuddered. “I sure as hell don’t want to end up here.”

She threw him a teasing smile. “Oh, Phillip!
We love this place! And I would take
such
good care of you!
I’d make sure my scalpel cut straight and true and my stitches were
neat and precise. You wouldn’t find a better seamstress. Nobody
would be any the wiser that I’d had my hands deep inside your
belly.”

Phillip grimaced and shook his head and then
gave her a sideways look. “You’re in a good mood today. Any
particular reason?”

Samantha thought about not telling him, but
then changed her mind.
What did it matter if he knew?
She
was truly thankful for every day she spent on the earth. “It’s my
birthday,” she revealed.

Phillip laughed. “Happy birthday! Dare I ask
which one? Or maybe I should just guess… Oh, my God!” he exclaimed
with mock surprise and horror. “Don’t tell me this is the big
4-0!”

She laughed, amused at his antics. “Very
funny! I bet you wish it was
your
big 4-0. I seem to recall
the last birthday you celebrated started with a five and ended in a
three.” She used her scalpel to cut through the tissue holding the
woman’s lungs in place and then added, “I turned thirty-four today,
if you must know.”

Phillip whistled. “Thirty-four! Who’d have
guessed? You look ten years younger! It must be the lack of
sunlight we get, hidden away in here. It has to be good for the
complexion, don’t you think? I read somewhere that too much sun can
age a person.”

Samantha lifted the lungs out of the chest
cavity and dropped them into a steel tray. The heart soon followed.
She shot Phillip a wry smile. “I’m glad to hear that spending
twelve hours a day, in the cold and dark we call the office, has
some advantages.”

“Of course! And best of all, you get to work
with me!” His face reflected the innocence that filled his voice,
but his eyes twinkled in merriment. He might be nearly two decades
older, but she considered Phillip Bond a friend.

They’d known each other for years, from back
when she’d worked at the Westmead Morgue. When she decided to move
closer to the city and had requested a transfer to Glebe, Phillip
was only too happy to transfer with her. They had a mutual respect
and genuine affection for each other that went beyond that of mere
work colleagues. For her, he was more like a father figure and
right from her earliest days as a forensic pathologist, he’d taken
her under his wing.

“So, how are you celebrating this momentous
birthday? With some very expensive champagne, I hope?”

Phillip’s questions broke into her thoughts
and she glanced across at him. “I’m having lunch with my brother
and I’ll probably catch up with my sisters after work. That’s about
it.”

“What? Alistair’s not even taking you to
dinner? What kind of brother is he?”

She laughed. “A very busy one with a lot of
responsibilities right now.”

“Yeah, yeah, yeah! So you say! Nobody forced
him to take on the role of the Sydney Harbour Hospital’s poster
boy. Just because he’s head of the Organ Donation for
Transplantation Unit doesn’t mean he shouldn’t make time to take
his baby sister out to dinner on her birthday.”

“It’s not that simple,” Sam replied. “Ever
since the recent joint initiative between the State Government and
the Sydney Harbour Hospital to increase the public’s awareness of
organ and tissue donation, he’s been run off his feet. Have you
noticed the increase in post mortems on organ donors coming through
here lately?”

“Yeah, I have.” He nodded toward the body on
the table. “This guy’s donated his heart, lungs, liver, pancreas
and both kidneys. That’s a whole heap of organs. I had two similar
cases last week and three the week before. That has to be some kind
of record.”

She nodded. “Until recently, one a week was
normal. Now, it seems every other day I do a PM on a body that’s
missing some of its parts.”

Phillip reached for his Stryker saw and went
to work on the man’s skull. “And those are only the bodies that
come through here. Imagine how many must be hitting the funeral
homes. I have to hand it to your brother, he’s sure had an impact
on donor numbers. He might be worth those big bucks, after all.”
Phillip shot her a wink and Sam rolled her eyes.

“It isn’t just him,” she replied, “although,
I admit, he could charm just about anyone. The Sydney Harbour
Hospital’s now running the campaign right through winter. As the
star of the show, Alistair told me he even had to attend a full-on
photo shoot with models and makeup and everything. The hospital’s
putting up billboards around the city, encouraging people to become
donors. My brother will be recognized wherever he goes.”

“Lucky him. With that kind of exposure, he
might even become a celebrity. Maybe you could go to one of those
swanky restaurants down near the water without a reservation and
demand to be seated.”

Sam laughed and joined in the fun. “Yes, and
then we could order the most extravagant thing on the menu and have
the restaurant cover the bill. They’ll be falling all over
themselves to have such a megastar in their presence. It would be
like something out of Hollywood.” She grinned again. “I like
it.”

The door to the main autopsy room opened and
she looked up in time to see the deputy coroner fill the doorway.
Sam sent him a brief wave of acknowledgement and returned to the
job at hand. With the remaining organs now in the steel tray, she
began to weigh them. An examination of the woman’s heart confirmed
the preliminary diagnosis. A large blood clot blocked the aorta.
Several smaller clots had formed in the surrounding blood vessels.
Sadly, it had been inevitable that this woman’s life would come to
an abrupt end. Sam would conduct routine toxicology just to be
thorough, even though it looked like lifestyle and hereditary
factors were the leading contributors to the woman’s untimely
demise.

Sam’s boss drew nearer and she greeted him
with a smile. “Hi, Richard. What’s up?”

Deputy Coroner, Richard Davis, looked from
her to Phillip and back again. “What are you two so happy about?”
he grumbled. “It’s Monday morning and we have a backload of bodies.
I don’t see anything jovial about that.”

Samantha smiled again because Richard’s bark
was always worse than his bite. It was the same every Monday.

“It’s Sam’s birthday,” Phillip piped up and
then proceeded to peel back the face of the man on the table.

Richard Davis turned to face her, his
expression one of surprise. “Happy birthday, Samantha. I should
have known.”

The Patriot by Nigel Tranter
Twice Loved by Mari Brown
The Devil's Lover: The Wish by Dahlia Lu
Sons, Servants and Statesmen by John Van der Kiste
What She'd Do for Love by Cindi Myers
The Wedding Diary (Choc Lit) by James, Margaret
Starship: Mercenario by Mike Resnick
The Temporary Wife by Jeannie Moon
Fatal Inheritance by Catherine Shaw
An Accidental Man by Iris Murdoch