Read The Call of the Wild and White Fang Online

The Call of the Wild and White Fang 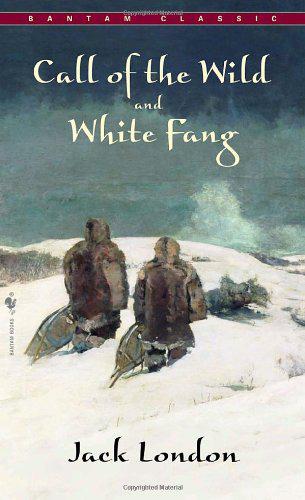 From the Pages of The Call of the Wild

From the Pages of White Fang

The World of Jack London, The Call of the Wild, and White Fang

The Call of the Wild

I - Into the Primitive

II - The Law of Club and Fang

IV - Who Has Won to Mastership

V - The Toil of Trace and Trail

VII - The Sounding of the Call

Part One - THE WILD

I - The Trail of the Meat

Part Two - BORN OF THE WILD

I - The Battle of the Fangs

IV - The Wall of the World

Part Three - THE GODS OF THE WILD

I - The Makers of Fire

IV - The Trail of the Gods

I - The Enemy of His Kind

III - The Reign of Hate

I - The Long Trail

IV - The Call of Kind

Inspired by The Call of the Wild and White Fang

From the Pages of
The Call of the Wild

He had learned to trust in men he knew, and to give them credit for a wisdom that outreached his own. But when the ends of the rope were placed in the stranger’s hands, he growled menacingly. (page 7)

He saw, once for all, that he stood no chance against a man with a club. He had learned the lesson, and in all his after life he never forgot it. That club was a revelation. It was his introduction to the reign of primitive law, and he met the introduction half-way. (page 12)

There is an ecstasy that marks the summit of life, and beyond which life cannot rise. And such is the paradox of living, this ecstasy comes when one is most alive, and it comes as a complete forgetfulness that one is alive. (page 32)

They were not half living, or quarter living. They were simply so many bags of bones in which sparks of life fluttered faintly. When a halt was made, they dropped down in the traces like dead dogs, and the spark dimmed and paled and seemed to go out. (page 53)

Deep in the forest a call was sounding, and as often as he heard this call, mysteriously thrilling and luring, he felt compelled to turn his back upon the fire and the beaten earth around it, and to plunge into the forest, and on and on, he knew not where or why; nor did he wonder where or why, the call sounding imperiously, deep in the forest. (page 60)

From the Pages of
White Fang

Daylight came at nine o‘clock. At midday the sky to the south warmed to rose-color, and marked where the bulge of the earth intervened between the meridian sun and the northern world. But the rose-color swiftly faded. The gray light of day that remained lasted until three o’clock, when it, too, faded, and the pall of the Arctic night descended upon the lone and silent land. (page 98)

Fear!—that legacy of the Wild which no animal may escape nor exchange for pottage. (page 140)

He had no conscious knowledge of death, but like every animal of the Wild, he possessed the instinct of death. To him it stood as the greatest of hurts. It was the very essence of the unknown; it was the sum of the terrors of the unknown, the one culminating and unthinkable catastrophe that could happen to him, about which he knew nothing and about which he feared everything. (page 146)

He did not like the hands of the man-animals. He was suspicious of them. It was true that they sometimes gave meat, but more often they gave hurt. (page 188)

The clay of White Fang had been molded until he became what he was, morose and lonely, unloving and ferocious, the enemy of all his kind. (page 211)

In a lofty way he received the attentions of the multitudes of strange gods. With condescension he accepted their condescension. (page 273) 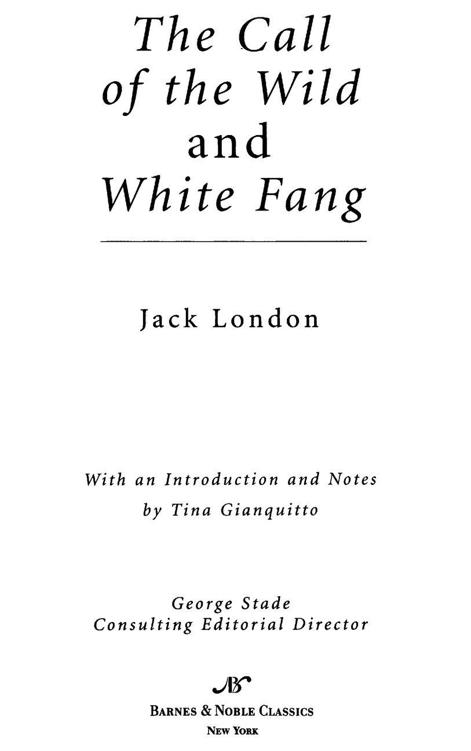 Introduction, Notes, and For Further Reading

All rights reserved. No part of this publication may be reproduced or transmitted in any form or by any means, electronic or mechanical, including photocopy, recording, or any information storage and retrieval system, without prior written permission of the publisher.

The Call of the Wild and White Fang

John Griffith London was born out of wedlock on January 12,1876, in San Francisco. His mother, Flora Wellman Chaney, a spiritualist and music teacher, married John London later that year. John continually moved the family around California looking for work on farms and ranches, and young Jack was self-sufficient by the time he was fourteen. After working as a newspaper delivery boy, cannery worker, and seaman aboard a sealing vessel, in 1894 he joined Coxey’s Army, a group of jobless men, on a march to Washington, D.C., to protest economic conditions. London abandoned the group along the way and eventually served prison time in northern New York for vagrancy. In prison he reflected on his position at the base of the social pyramid as exploited worker and developed his own branch of Socialism, influenced by the writings of Karl Marx and Friedrich Nietzsche. He joined the Socialist Labor Party and, espousing the idea that education is the route out of exploitation, enrolled at the University of California at Berkeley. He dropped out after just one semester but continued to educate himself by reading the fiction of such writers as Robert Louis Stevenson, Rudyard Kipling, and Joseph Conrad and the philosophical and political works of Sigmund Freud, Carl Jung, Adam Smith, Immanuel Kant, and Herbert Spencer.

It is telling that when London joined the Klondike Gold Rush in 1897, he packed a copy of Charles Darwin’s
On the Origin of Species
and John Milton’s
Paradise
Lost alongside such essentials as bacon and flour. London returned no richer than he was when he left and decided to devote himself to writing. Though London later claimed, “I did not know a soul who had ever published anything... I had no one to give me tips,” in fact he counted among his good friends the poet George Sterling, the writer and journalist Ambrose Bierce, and the editors of the
San Francisco
Call and the
Oakland Times.
He began writing newspaper articles on the Russo-Japanese war and the Mexican Revolution, as well as short stories, and within two decades he had published forty-seven books. By 1913 London was the highest-paid writer in the world, and
The Call of the Wild
and
White Fang
were enduringly popular with critics and the public. Both stories draw heavily from London’s Yukon experience and exhibit the influence of Darwin’s notion of the survival of the fittest; both also show London’s avoidance of sentimentality and his commitment to presenting injustice and brutality. London married Bess Maddern, whom he claimed to have chosen for mating possibilities, not for love, in 1900. The couple had two daughters, Joan and Bess, and soon divorced. In 1905 London married Charmian Kittredge, his so-called “Mate Woman,” with whom he shared many of his adventures and who was the model for many of his female characters. Jack London died of uremia and renal colic in 1916.