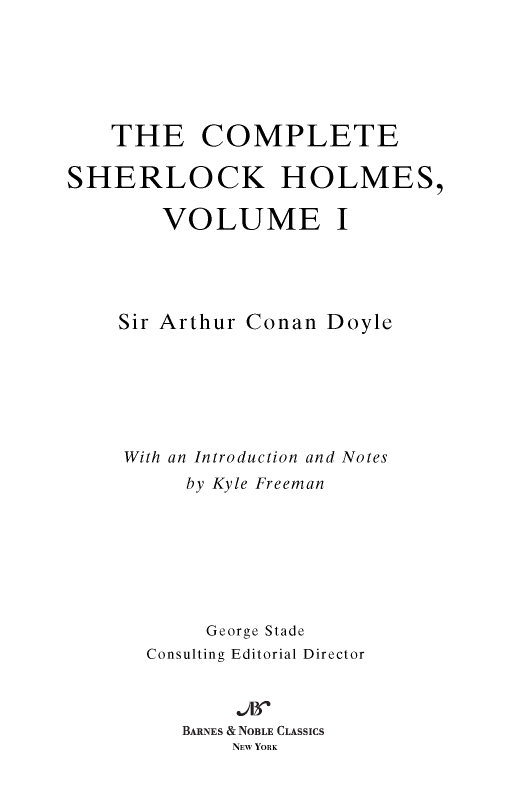 Table of Contents
FROM THE PAGES OF THE COMPLETE SHERLOCK HOLMES, VOLUME I
Title Page
Copyright Page
SIR ARTHUR CONAN DOYLE
THE WORLD OF SIR ARTHUR CONAN DOYLE AND SHERLOCK HOLMES
Introduction
INTRODUCTION TO VOLUME I
A NOTE ON CONVEYANCES
A STUDY IN SCARLET - Part I BEING A REPRINT FROM THE REMINISCENCES OF JOHN H. ...
CHAPTER 1 - Mr. Sherlock Holmes
CHAPTER 2 - The Science of Deduction
CHAPTER 3 - The Lauriston Garden Mystery
CHAPTER 4 - What John Rance Had to Tell
CHAPTER 5 - Our Advertisement Brings a Visitor
CHAPTER 6 - Tobias Gregson Shows What He Can Do
CHAPTER 7 - Light in the Darkness
Part 2 - THE COUNTRY OF THE SAINTS
CHAPTER 1 - On the Great Alkali Plain
CHAPTER 2 - The Flower of Utah
CHAPTER 3 - John Ferrier Talks with the Prophet
CHAPTER 4 - A Flight for Life
CHAPTER 5 - The Avenging Angels
CHAPTER 6 - A Continuation of the Reminiscences of John Watson, M.D.
CHAPTER 7 - The Conclusion
THE SIGN OF FOUR
CHAPTER 1 - The Science of Deduction
CHAPTER 2 - The Statement of the Case
CHAPTER 3 - In Quest of a Solution
CHAPTER 4 - The Story of the Bald-Headed Man
CHAPTER 5 - Tragedy of Pondicherry Lodge
CHAPTER 6 - Sherlock Holmes Gives a Demonstration
CHAPTER 7 - The Episode of the Barrel
CHAPTER 8 - The Baker Street Irregulars
CHAPTER 9 - A Break in the Chain
CHAPTER 10 - The End of the Islander
CHAPTER 11 - The Great Agra Treasure
CHAPTER 12 - The Strange Story of Jonathan Small
ADVENTURES OF SHERLOCK HOLMES
A SCANDAL IN BOHEMIA
1
2
3
THE RED-HEADED LEAGUE
A CASE OF IDENTITY
THE BOSCOMBE VALLEY MYSTERY
THE FIVE ORANGE PIPS
THE MAN WITH THE TWISTED LIP
THE ADVENTURE OF THE BLUE CARBUNCLE
THE ADVENTURE OF THE SPECKLED BAND
THE ADVENTURE OF THE ENGINEER’S THUMB
THE ADVENTURE OF THE NOBLE BACHELOR
THE ADVENTURE OF THE BERYL CORONET
THE ADVENTURE OF THE COPPER BEECHES
MEMOIRS OF SHERLOCK HOLMES
SILVER BLAZE
THE YELLOW FACE
THE STOCK-BROKER’S CLERK
THE “GLORIA SCOTT”
THE MUSGRAVE RITUAL
THE REIGATE PUZZLE
THE CROOKED MAN
THE RESIDENT PATIENT
THE GREEK INTERPRETER
THE NAVAL TREATY
THE FINAL PROBLEM
THE HOUND OF THE BASKERVILLES
CHAPTER 1 - Mr. Sherlock Holmes
CHAPTER 2 - The Curse of the Baskervilles
CHAPTER 3 - The Problem
CHAPTER 4 - Sir Henry Baskerville
CHAPTER 5 - Three Broken Threads
CHAPTER 6 - Baskerville Hall
CHAPTER 7 - The Stapletons of Merripit House
CHAPTER 8 - First Report of Dr. Watson
CHAPTER 9 - Second Report of Dr. Watson
CHAPTER 10 - Extract from the Diary of Dr. Watson
CHAPTER 11 - The Man on the Tor
CHAPTER 12 - Death on the Moor
CHAPTER 13 - Fixing the Nets
CHAPTER 14 - The Hound of the Baskervilles
CHAPTER 15 - A Retrospection
ENDNOTES
COMMENTS & QUESTIONS
FOR FURTHER READING
FROM THE PAGES OF
THE COMPLETE
SHERLOCK HOLMES, VOLUME I
“Like all other arts, the Science of Deduction and Analysis is one which can only be acquired by long and patient study, nor is life long enough to allow any mortal to attain the highest possible perfection in it. Before turning to those moral and mental aspects of the matter which present the greatest difficulties, let the inquirer begin by mastering more elementary problems.” (
A Study in Scarlet
, page 17)
“It is a capital mistake to theorize before you have all the evidence. It biases the judgment.” (
A Study in Scarlet
, page 22)
“When you have eliminated the impossible, whatever remains,
however improbable
, must be the truth.” (
The Sign of Four
, page 126)
“It is the unofficial force—the Baker Street irregulars.”
(
The Sign of Four
, page 145)
“Singularity is almost invariably a clue. The more featureless and commonplace a crime is, the more difficult it is to bring it home.”
(“The Boscombe Valley Mystery,” page 240)
He flicked the horse with his whip, and we dashed away through the endless succession of sombre and deserted streets, which widened gradually, until we were flying across a broad balustraded bridge, with the murky river flowing sluggishly beneath us. Beyond lay another dull wilderness of bricks and mortar, its silence broken only by the heavy, regular footfall of the policeman, or the songs and shouts of some belated party of revellers. A dull wrack was drifting slowly across the sky, and a star or two twinkled dimly here and there through the rifts of the clouds. Holmes drove in silence, with his head sunk upon his breast, and the air of a man who is lost in thought. (“The Man with the Twisted Lip,” page 270)
“My name is Sherlock Holmes. It is my business to know what other people don’t know.” (“The Adventure of the Blue Carbuncle,” page 302)
“Crime is common. Logic is rare.”
(“The Adventure of the Copper Beeches,” page 377)
Like all Holmes’s reasoning the thing seemed simplicity itself when it was once explained. (“The Stock-Broker’s Clerk,” page 433)
“Elementary,” said he. (“The Crooked Man,” page 492)
Through the haze I had a vague vision of Holmes in his dressing-gown coiled up in an armchair with his black clay pipe between his lips.
(
The Hound of the Baskervilles
, page 592) 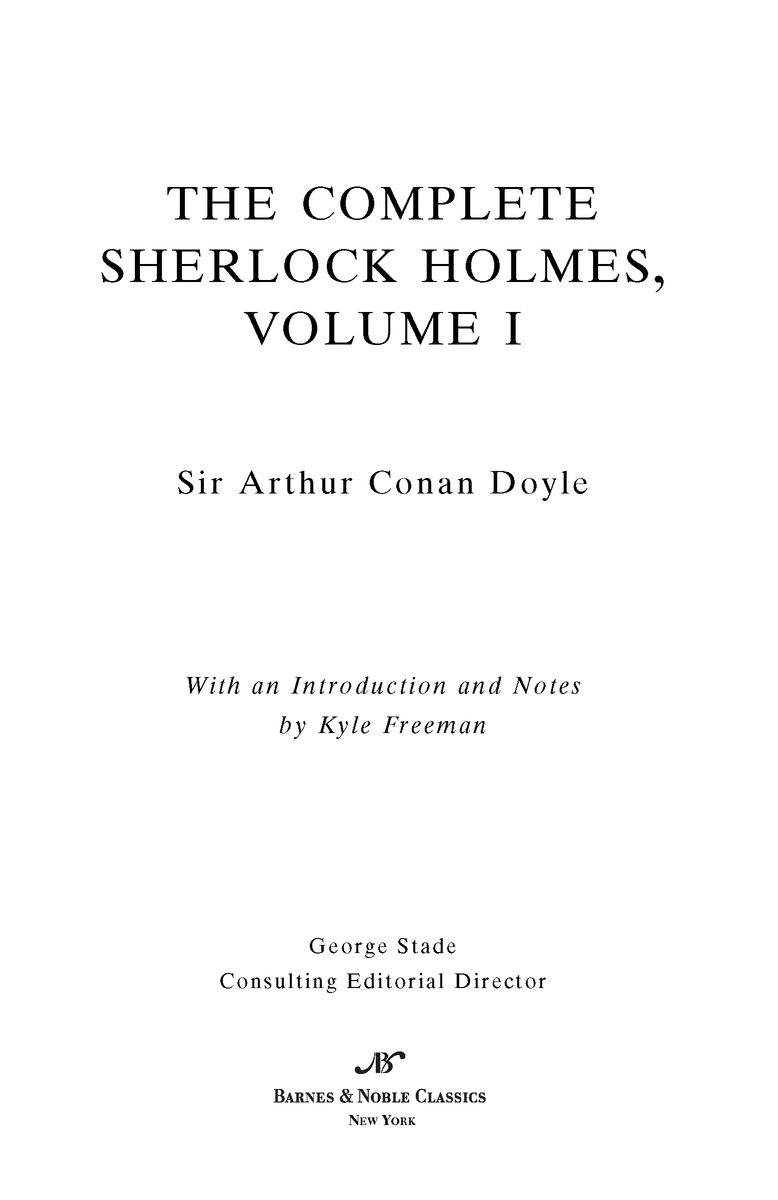 Published by Barnes & Noble Books
122 Fifth Avenue
New York, NY 10011
www.barnesandnoble.com/classics
A Study in Scarlet
was first published in 1887,
The Sign of Four
in 1890, and
The
Hound of the Baskervilles
in 1902. The stories in
Adventures of Sherlock
Holmes
were first collected and published in 1891, and those in
The
Memoirs of Sherlock Holmes
in 1892.
Published in 2003 by Barnes & Noble Classics with new Introduction,
Notes, Biography, Chronology, A Note on Conveyances, Comments & Questions,
and For Further Reading.
General Introduction, Introduction to Volume I, A Note on
Conveyances, Notes, and For Further Reading
Copyright © 2003 by Kyle Freeman.
Note on Sir Arthur Conan Doyle, The World of Sir Arthur Conan Doyle
and
Sherlock Holmes
, and Comments & Questions
Copyright © 2003 by Barnes & Noble, Inc.
All rights reserved. No part of this publication may be reproduced or
transmitted in any form or by any means, electronic or mechanical, including
photocopy, recording, or any information storage and retrieval system,
without the prior written permission of the publisher.
Barnes & Noble Classics and the Barnes & Noble Classics
colophon are trademarks of Barnes & Noble, Inc.
The Complete Sherlock Holmes, Volume I
ISBN-13: 978-1-59308-034-1 ISBN-10: 1-59308-034-4
eISBN : 978-1-411-43197-3
LC Control Number 2003102759
Produced and published in conjunction with:
Fine Creative Media, Inc.
322 Eighth Avenue
New York, NY 10001
Michael J. Fine, President and Publisher
Printed in the United States of America
QM
10 12 14 16 18 20 19 17 15 13 11
SIR ARTHUR CONAN DOYLE
Arthur Conan Doyle had many careers—physician, writer of popular fiction and nonfiction, war correspondent, historian, and spiritualist—but it was the creation of his immensely popular Sherlock Holmes that was to be his enduring legacy. The author was born in Edinburgh, Scotland, on May 22, 1859. His mother raised ten children on her husband’s small income; his father’s poor health and heavy drinking made that a daunting task. Despite this adversity, his mother’s willfulness and her exhaustive genealogical research instilled in Arthur a decided sense of purpose.
After early education in Jesuit schools, Conan Doyle enrolled in Edinburgh University, where he earned a medical degree while working part-time to support his family. At the university one of his instructors was Dr. Joseph Bell, who had an uncanny ability to deduce the histories of his patients and who later became a template for Sherlock Holmes. Another teacher, an eccentric Professor Rutherford, inspired the character of Professor George Edward Challenger in
The Lost World
and other novels and short stories.
Having had a taste of adventure when he served as ship’s physician on a Greenland Sea whaler while still a student, Conan Doyle longed to travel after graduation and so took a position as doctor on a ship en route to West Africa. Returning to England, he set up as a physician in 1882. His practice was small at first, so he had time to do some writing. In 1887 the first Sherlock Holmes story appeared, titled
A Study in Scarlet
. Over the next few years, Conan Doyle would write a historical novel, open a new ocular practice, explore spiritualism, and send Holmes on further thrilling exploits. A second novel,
The Sign of Four
, came out in 1890, and starting in 1891 the Holmes stories regularly appeared in the
Strand Magazine
. Two collections,
The Adventures of Sherlock Holmes
in 1892 and
The Memoirs of Sherlock Holmes
in 1893, collected a total of twenty-four of the mysteries. However, Conan Doyle felt that work on the Holmes stories was keeping him from writing on more serious historical topics. To the shock of his readers, in the 1893 story called “The Final Problem” he described the death of his famous sleuth.
ADS
15.4Mb size Format: txt, pdf, ePub

One Bloody Thing After Another by Joey Comeau
The Apocalypse by Jack Parker
LOWCOUNTRY BOOK CLUB by Susan M. Boyer
Dead Meat by William G. Tapply
Gibraltar Road by Philip McCutchan
Conjurer by Cordelia Frances Biddle
I Am Automaton: A Military Science Fiction Novel by Cardillo, Edward P.
The Mystery of the U.F.O. by David A. Adler
Pestilence by T.A. Chase
Hunt for Justice by Vernon, James R.