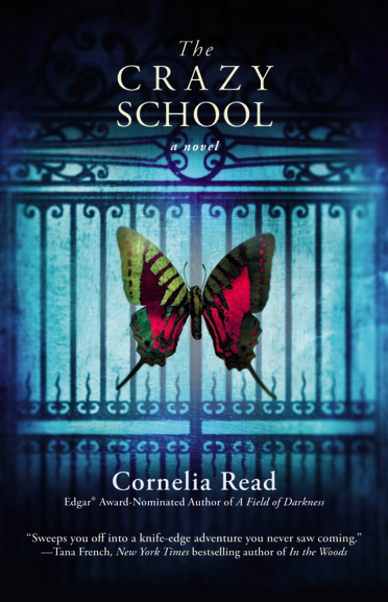 “. . . the whodunit plot is funny and twisted, and it gives Madeline plenty of opportunities to air her caustic views on the evolutionary decline of her social class.”

“A totally fun novel of gentle suspense . . . lingers long after the last scream has been scrum.”

“Read’s novel is fast-paced; once the action starts, don’t even think about putting it down.”

The series belongs on the must-read list of anyone who enjoys mystery mixed with comedy.”

“Madeline’s a great character, and her creator is a great storyteller. Caustic, gripping and distinctive—intelligent entertainment.”

“Cornelia Read’s
A Field of Darkness
was a blow your mind debut novel.
The Crazy
School
is even better. It’s witty, it’s dark, it’s disturbing and it will stick in my mind for ages . . .”

“Like most successful mystery novels, the characters and their drama carry the story, and Cornelia Read gives us the entertaining gift of Madeline Dare.
The Crazy School
is a wonderful novel and I’m eager to read whatever Cornelia Read has to offer next.”

A Field of Darkness

This book is a work of fi ction. Names, characters, places and incidents are the product of the author’s imagination or are used fi ctitiously. Any resemblance to actual events, locales, or persons, living or dead, is coincidental.

First published in Australia in 2008

All rights reserved. No part of this book may be reproduced or transmitted in any form or by any means, electronic or mechanical, including photocopying, recording or by any information storage and retrieval system, without prior permission in writing from the publisher. The

ARENA, an imprint of

Typeset in Australia in 12.5/16 pt Garamond by Midland Typesetters, Australia.

Printed and bound in Australia by Griffi n Press.

To all the kids who attended the DeSisto School,
especially those of you who were my students,
thank you for all that you taught me.

“As a matter of fact, I’ve always had a theory about anxiety.

I’ve decided my anxiety always increases in direct proportion
to the absence of Richard Nixon in my life.”

Julie began to smile. She knew where I was headed.

“When he was around, lying, cheating, trying to destroy
the Constitution, I was furious, but I had no anxiety. Then he
resigned in ’74, and I swear that’s when my anxiety got really
bad. What’s more, I bet I’m not the only person who is walking around psychologically crippled by the absence of Richard
Nixon in their lives.”

I’m Dancing as Fast as I Can

Halfway to Christmas, Forchetti stated the obvious: “You can’t teach for shit.”

The other six kids went quiet, looking from him to me—

teen-angst scratching and hair twirling and pencil chewing arrested for once.

He cracked his gum, noise reverberating off the jaundice-yellow cinder block.

It was an ugly room. Demoralizing. I didn’t want to be in it either, only you’re not supposed to say that when you’re the grown-up.

I crossed my arms and said, “Did you read the damn chapter?”

Forchetti smirked and pincered the spit-warm raisin of Juicy Fruit off his tongue. He held it up, pretending to sight down the damn thing, straight at my forehead.

I stared right back at his narrow face, at those baby features overwhelmed by black eyebrows he hadn’t yet grown into. “
Did
you?”

Without looking down, Forchetti opened his copy of
I Know
Why the Caged Bird Sings
at a random page, dropped the little 3

gum wad inside and mashed the paperback shut against his chair’s faux-wood paddle of desk.

“I wouldn’t read this piece of shit if you dropped to your knees and blew me,” he said.

Good-looking kid, Wiesner: six-fi ve, white-blond hair slicked back, gray eyes with long dark lashes. He was just back from eight days in county lockup, after holding a teacher and a couple of students hostage with a carving knife so he could call his girlfriend long-distance on the principal’s offi ce phone.

Now I had him for two out of three classes.

Forchetti dropped his eyes to the carpet.

“She
is
a shitty teacher,” he whined, “and you owe a dollar to the Rape Crisis Fund for saying the F-word, Wiesner.”

Which was true. It was a big-time rule here at the Santangelo Academy, because Dr. David Santangelo felt that “fuck”

was a word fundamentally linked to violence against women.

It was, in fact, the only word the students weren’t allowed to say. Or the teachers.

Wiesner pulled a crisp fi ve from his pocket. “Four to go, then.” He lifted his right hand, waggling the digits in Forcheti’s direction.

“Madeline is not a
fucking
shitty teacher,” he said, folding his index fi nger down on the stressed word. “You, on the other hand, are a
fucking
”—middle fi nger—“suckbag
fuck
”—ring fi nger—“and if you don’t leave her alone, I’m going to
fucking
”—pinkie—“stomp your skinny ferret ass the next time I catch you alone in the showers.”

Wiesner wadded up the money and tossed it at Forchetti’s feet. “Be a sweetheart and put that in Santangelo’s little jar for me.”

Forchetti blushed, but he picked the bill up off the fl oor and put it in his pocket.

I would have told Wiesner to lay off threatening a foot-shorter kid he had fi fty pounds on, except Patti Gonzaga started growling, which was what happened the fi rst week, right before she chunked her chair at my head.

The lunch bell went off, thank God, and the kids stampeded into the hallway, all except Wiesner who stayed in his seat, stretched his legs out, and grinned at me.

One last door slammed down the hall.

He ambled over and sat on the edge of my desk. “Penny for your thoughts.”

“I think you’ll be late for lunch.”

“Figured I’d walk you over,” he said.

“I still have to do everybody’s marks.” We were supposed to rate how each kid behaved, at the end of each class. Forchetti’d racked up three straight weeks of zeroes—winner and still champion.

Wiesner lounged back on an elbow. “I can wait.”

I pulled open the top drawer, looking for a pen. “They’ll get all pissed if you’re not there for the meds.”

“You just seem kind of shaky,” he said, voice soothing. “I want to make sure you feel okay.”

The drawer was full of crap, souvenirs of my predecessors—

paper clips, barrettes, dental fl oss, half a roll of TUMS, and a screwdriver.

Teachers left this place in a hurry.

Wiesner leaned over, perusing the contents.

I looked up. “Of course there isn’t a single fucking pen.”

He smiled, extracting a Bic from his jacket.

“Trade you for that screwdriver,” he said. “I need to make a phone call.”

Wiesner and I angled across the lawn toward the dining hall. I didn’t want to get there. I wanted to cut off into the woods and have a smoke, alone, only I couldn’t because the other teachers would have smelled it on me and narked.

I shoved a hand deeper into the pocket of my leather jacket, fi shing through its torn lining to grip my crumpled pack of Camel straights.

I hadn’t even thought about cigarettes since college. Now they were the focus of my existence, along with caffeine. We weren’t allowed to have that, either, which didn’t stop me from sucking down thick-walled cups of the tepid institutional decaf, hoping in vain they’d missed scrubbing the kick from a bean or two.

The Santangelo Academy air was crisp and fresh after a week of rain, edged with wood smoke and rotting leaves.

The trees outside were losing their last Robert Frost touches of burnished brass and copper—sorry leaves ready to drop from maples and elms and whatever the hell else kind of East Coast trees I still didn’t know the names of, twelve years after leaving California.

A sweet breath of cider drifting up from the weed-choked orchard, planted back when this had all been some Bostonian nouveau magnate’s country place, before the Civil War.

It was beautiful here in the Berkshires. I’d give it all that much.

He was lying. I shouldn’t have cared.

“The lady who wrote it,” I said, “I knew her brother Bailey.

He used to come to our house.”

I thought about this one time when I was little, maybe 1970, and Bailey saw me cutting dry rot out of a tree trunk in our backyard with a paring knife. He told me he’d bring me a switchblade as a present the next weekend he came down from Berkeley, said he wanted to make sure I’d be okay “come the revolution,” since I was pretty hip for a white kid.

Wiesner nudged my upper arm with his fi st and said, “So, d’you do him, her brother?”

He grinned down at me. “Can’t kid a kidder.”

He gave me a pat on the head.

“What the hell kind of thing is that to even
say
?” I said, batting his hand away. “To anyone, let alone a teacher. I mean, would you pull that shit with Mindy or Gerald or Tim?”

“How about because you look good in that little skirt, and you’re blonde with green eyes, and you’re wearing cowboy boots, and it’s a gorgeous day.”

I rolled my eyes. Started walking away.

“Are you sure you want to know?” he asked, behind me now.

“We’re late,” I said. “If you want to say something that’s not merely about pissing me off, I’ll give you ten seconds.”

He looked at the ground, a little embarrassed. “I say shit like that to you, Madeline, because I know I
can,
okay?”

I was touched. “Because you trust me.”

“No, because you’re too whacked to maintain appropriate boundaries.”

He raised his eyes again, but I looked away. At the trees and stuff.

I’d always despised the shrink-sponsored murder of language—all precision and metaphor and beauty boiled away until there was nothing left but carbonized lumps of jargon.

“You have issues around authority,” he continued. “I fi gure that’s why you’re here.”

He shrugged. “When you’re ready to own your shit, you’ll know why you’re
really
here. That’s what this place does.”

The Burning by M. R. Hall
Veil of Midnight by Lara Adrian
Impact by Rob Boffard
Like No One Else by Maureen Smith
Minds That Hate by Bill Kitson
Hooked!: A Contemporary, Multicultural Romance by Yuwanda Black
A Seductive Proposal by Caris Roane
Bag of Blood - Vampire Mystery Romance by Osbourne, J.O.
Seducing the Bodyguard by Capri Montgomery
Hawk's Way: Rebels by Joan Johnston