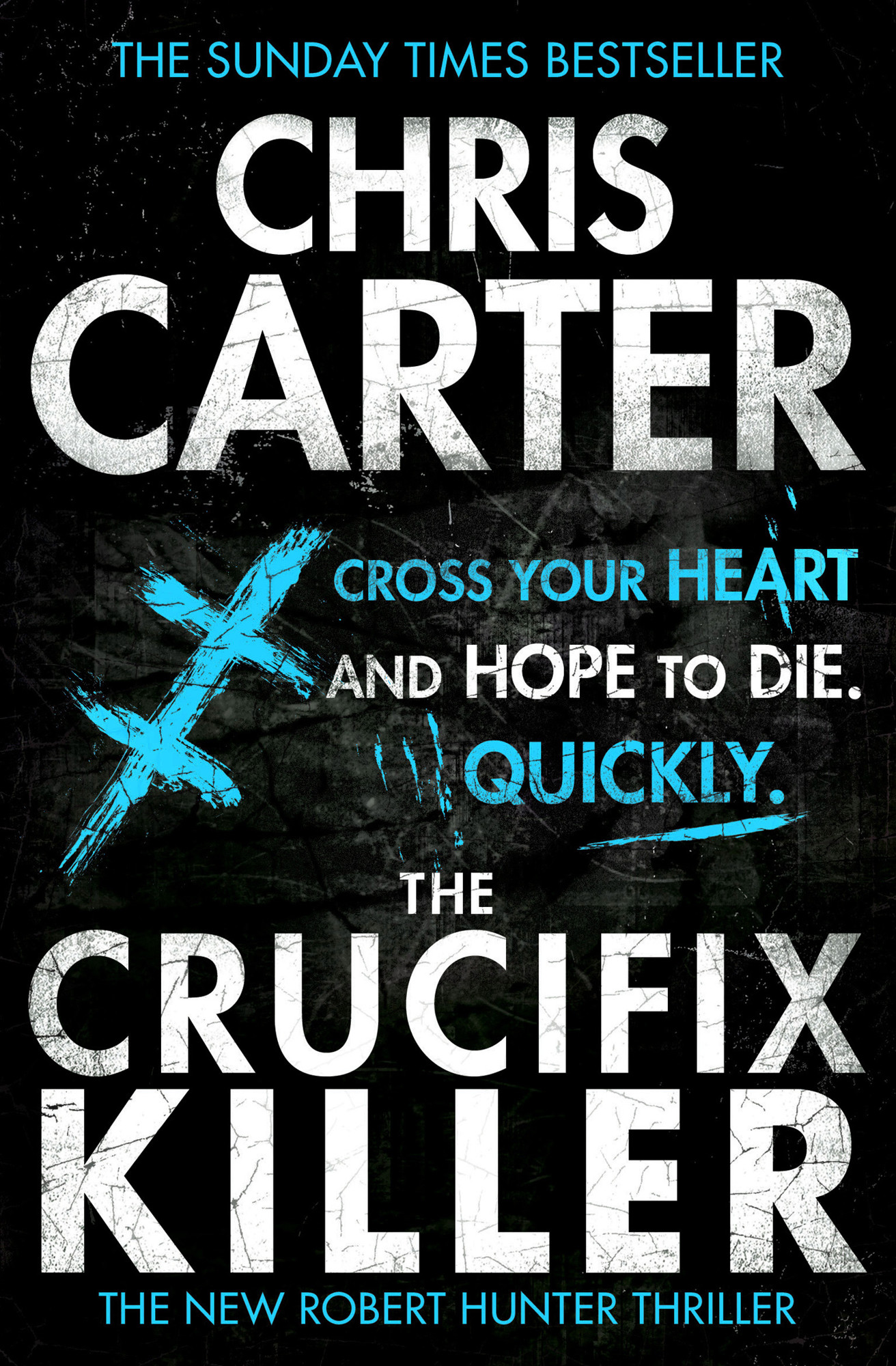 The right of Chris Carter to be identified as author of this work has been asserted in accordance with sections 77 and 78 of the Copyright, Designs and Patents Act, 1988.

Typeset by M Rules
Printed in the UK by CPI Mackays, Chatham ME5 8TD

To Samantha Johnson, for simply being everything.

Writing is always regarded as a solitary occupation, but I owe a great debt to several people who have generously given me their time and input, in so many areas.

My love and thanks to Samantha Johnson, the most giving and understanding person I know, and who tirelessly read and re-read the initial manuscript so many times, even I lost count.

Thank you also to Coral Chambers for the encouragement and for pointing me in the right direction and to Andrea McPhillips for the corrections and the chats.

My sincere thanks also goes to all the incredible people at Simon & Schuster UK who have done an outstanding job and to my phenomenal editors, Kate Lyall Grant in the UK and Pia Götz and Sybille Uplegger in Germany, whose great input and valuable suggestions made the story and the characters in this thriller come alive.

Words can’t express how thankful I am to the most passionate, dedicated, thoughtful, determined and extraordinary agents any author could ever hope for – Darley Anderson and Camilla Bolton. I’m the lucky one.

To the fantastic team of extremely hard-working people at the Darley Anderson Literary Agency, my eternal gratitude.

Hunter froze, almost dropping his coffee cup. He knew that metallic voice very well. He knew when that voice called it meant only one thing – a new, mutilated dead body.

‘
Have you heard from your partner lately?
’

‘Has anyone heard from Garcia this morning?’ he shouted across the office after pressing the mute button on his cell phone.

The other detectives exchanged silent, puzzled looks and Hunter knew the answer even before it came.

‘Not since yesterday,’ Detective Maurice said shaking his head.

‘What have you done to him?’

‘What have you done to him?’ Hunter demanded in a firm voice.

‘
As I’ve said, it’s a surprise, Robert
,’ the metallic voice said laughing. ‘
But I’ll give you another chance to make a difference. Maybe this time you’ll put more effort into it. Be at the laundry room down in the basement of the old number 122 Pacific Alley in South Pasadena within the hour. If you bring back-up, he dies. If you don’t make it within the hour, he dies. And trust me, Robert, it’ll be a very slow and painful death.
’ The line went dead.

Hunter raced down the stairs of the old building in east LA in giant leaps. The deeper he went, the darker and hotter it got. His shirt was covered in sweat, his tight shoes crushing his feet.

‘Where the hell is this laundry room?’ he whispered as he reached the basement.

A glimmer of light was coming from underneath a closed door at the end of a dark corridor. He ran towards it calling his partner’s name.

Hunter pulled out his Wildey Survivor double-action pistol and positioned his back against the wall to the right of the door.

‘Rookie, are you in there?’

A muffled thud came from inside the room. Hunter cocked his gun and took a deep breath.

With his back still against the outside wall, he pushed the door open with his right hand and in a well-rehearsed move rotated his body into the room, his gun searching for a target. An unbearable smell of urine and vomit forced him to take a step back coughing violently.

From outside Hunter couldn’t see much. The light bulb that hung from the ceiling above a small wooden table in the center of the room was too weak to illuminate it properly. He drew another deep breath and took a step forward. What he saw made his stomach churn. Garcia had been nailed to a life-size cross inside a Perspex cage. The heavy bleeding from his wounds had created a pool of blood at the base of the cross. He was wearing nothing but his underwear and a barbed-wire crown around his head, the thick metal spikes clearly piercing his flesh. Blood streaking down his face. Garcia looked lifeless.

Approaching the cage he was surprised to see a heart monitor inside it. Its line peaking slightly and at steady intervals. Garcia was still alive – just.

With great effort Garcia managed to half open his eyes.

Hunter surveyed the dimly lit room. It was large, fifty-five feet by forty-five he guessed. The floor was littered with dirty rags, used syringes, crack pipes and broken glass. In the corner, to the right of the entrance door he could see an old and rusty wheelchair. On the wooden table in the center of the room sat a small, portable cassette tape recorder and a single note that read
play me first
in large red letters. He pressed the play button and the now familiar metallic voice came blasting out of the tiny speaker.

‘
You have no doubt realized that your friend needs your help, but for you to be able to help him you have to play by certain rules
. . .
my rules. This is a simple game, Robert. Your friend is locked inside a bullet-proof cage, so shooting it won’t help you. On its door you’ll find four colored buttons. One of them opens the cage, the other three – don’t. Your task is quite simple – pick a button. If you press the correct one the door will open, you’ll be able to free your partner and walk out of the room.’

One chance in four to save Garcia – definitely not great odds, Hunter thought.

‘
Now here comes the fun part
,’ the tape recorder played on. ‘
If you press any of the other three buttons an uninterrupted high-voltage current will be sent directly to the wire crown on your friend’s head. Have you ever seen what happens to a human being while he’s being electrocuted?
’ the voice said with a chilling laugh. ‘
His eyes burst, his skin crinkles like bacon, his tongue recoils into his mouth ready to choke him to death, his blood boils, bursting vessels and arteries open. It’s quite an exquisite scene, Robert.’

Somehow Hunter knew that the electric current trick wouldn’t be the only twist in that room.

‘
Behind the cage I’ve placed enough explosives to obliterate the room you’re in. The explosives are attached to the heart monitor and if it gets to read a flatline
. . .’ a longer pause this time. Hunter knew what the metallic voice was about to say next.

‘
Boom
. . .
the room blows. So you see Robert, if you press the wrong button, not only will you watch your friend die knowing that you’ve killed him, but you’ll get to die soon after.’

Hunter’s heart was now beating viciously against his chest, sweat dripping from his forehead and stinging his eyes, his hands shaky and clammy.

‘
But you have a choice Robert. You don’t have to save your partner, you can just save yourself. Walk away now and leave him to die alone. No one will know except you. Can you live with that? Will you gamble your life for his? Pick a color, you’ve got sixty seconds.
’ A loud beep came from the tape recorder before it went silent.

Jenny rubbed her eyes as she got up from the busy table at the Vanguard Club in Hollywood, hoping she didn’t look as tired as she felt.

Bobby Preston was the best known dealer in northwest Los Angeles, but no one ever called him by his real name, everyone knew him as D-King. The ‘D’ stood for ‘Dealer’ as he would deal in just about anything: drugs, girls, cars, guns – for the right price he’d supply you with whatever you wanted.

Jenny was by far his most stunning girl. Her body was flawlessly toned and tanned and her perfect face and smile could charm any men on this earth, D-King was sure of it.

‘I just need to retouch my make-up. I’ll be right back babe.’ She blew him a little kiss and left the exclusive VIP area still holding her champagne glass.

Jenny couldn’t handle any more alcohol, not because she was feeling drunk, but because this was her fifth successive night out partying and she’d had enough. She didn’t think her life would turn out this way. She never thought she’d become a hooker. D-King had always assured her that she wasn’t a working girl. She was a high-class entertainer for gentlemen with extremely good taste and obviously a lot of money, but at the end of the day she was having sex for cash. To her that made her a hooker.

Jenny had been to the Vanguard Club plenty of times. It was one of D-King’s favorite hangouts. There was no denying that the club was a magnificent luxurious extravaganza. From its enormous dance floor to its laser-light show and great stage. The Vanguard could hold up to two thousand people, and tonight the club was packed to capacity.

Queens of All the Earth by Hannah Sternberg
The Case of the Petrified Man by Caroline Lawrence
Eden's Garden by Juliet Greenwood
Too Pretty to Die by Susan McBride
Rivers of Gold by Tracie Peterson
Current Impressions by Kelly Risser
Small g by Patricia Highsmith
Nick of Time (A Bug Man Novel) by Downs, Tim
Always Yours by Kari March
Dead Reckoning by Lackey, Mercedes, Edghill, Rosemary