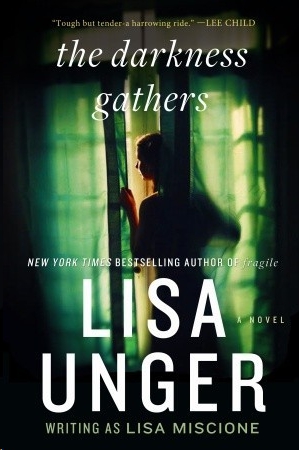 Praise for
the darkness gathers

“Once in a while a mystery novel appears that has everything you want and more: gutsy, complicated characters, a rocket-paced story that hardly gives you time to catch your breath, and twists and turns you never see coming. This is that novel.…
The Darkness Gathers
is flat-out terrific.”
—Margaret Coel,
New York Times
bestselling author

“Miscione appeared on the thriller scene a year ago with the widely acclaimed
Angel Fire
and should garner equally enthusiastic reviews for her second … it soars.”
—St. Petersburg Times

“The author, who lives in Clearwater, has a thorough understanding of the vagaries of South Florida. And Miscione delivers some action-packed scenes, especially a few creepy nights in Manhattan and a chilling visit to Albania.”
—Sun-Sentinel

“
The Darkness Gathers
is a compelling read with an interesting story line. The author’s portrayal of sexual slavery and the Albanian situation is edifying as well as disturbing.”
—Knoxville News Sentinel

“This is a great second novel.… The suspense is almost unbearably high … an intelligent thriller, and the love story between Lydia and Jeffrey adds a poignant and beautiful relief to the omnipresent evil that pervades the rest of the pages. We can’t wait for the third.”
—New Mystery Reader Magazine

“Another fantastic page-turner … Lisa Miscione knows how to take an idea and make it extraordinary!”
—Book Review Cafe

“The intensity of the suspense of this novel is overwhelming with the surprises the author has in store for the reader. It will lead to sleepless nights and a sense of moral outrage when what the evil men do is exposed.
The Darkness Gathers
is a powerful novel.”
—I Love a Mystery Newsletter

“The second in Miscione’s series featuring true-crime writer Lydia Strong is a winner.… An exciting story enriched by a glamorous writer-heroine who carries a Glock and knows how to use it.”
—Booklist 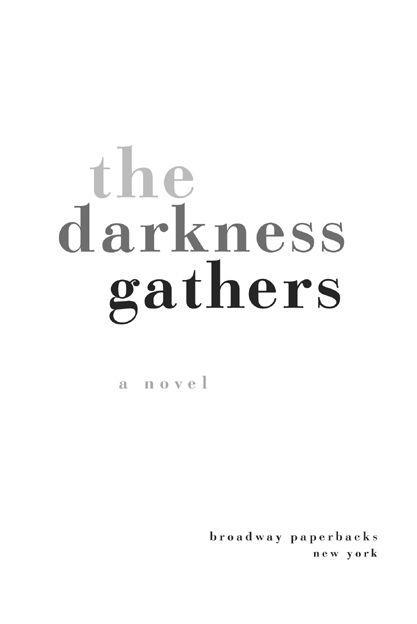 All rights reserved.
Published in the United States by Broadway Paperbacks, an imprint of the Crown Publishing Group, a division of Random House, Inc., New York.

Broadway Paperbacks and its logo, a letter B bisected on the diagonal, are trademarks of Random House, Inc.

To my grandparents,
Carmella and Mario Miscione

The solid foundation upon which all things are built,
The roots of the tree,
The source from which we all grew,
To be the people that we are …
And will be.

I was nineteen years old when I first met Lydia Strong. I was living in the East Village, dating a New York City police officer, and attending Eugene Lang College, the undergraduate school of the New School for Social Research. I was sitting in a car, under the elevated section of the “1” line in the Bronx, waiting—for what I can’t remember. But in my mind that day, I kept seeing this woman running past a church. She was in New Mexico. And all I knew about her was that she was a damaged person, someone in great pain. Running, for her, was salve, religion, and drug. That was Lydia.

I pulled a napkin and a pen from the glove compartment and started writing the book that would become
Angel Fire
. It took me ten years to write that novel, mostly because the years between age nineteen and twenty-nine were, for me, years of hard work and tumultuous change. But also because during that time, I let my dreams of becoming a writer languish a bit. Lydia was faithful; she waited.

In spite of a first-rate education, a career in publishing, and a strong desire to write fiction, I didn’t know much of anything when I was writing my first novel. I don’t think you
can
really know anything about writing a novel until you’ve actually written one. (And then you go to school again when you sit down to write your second, and your third, and so on.) All I knew during that time was that I was truly fascinated by this woman occupying a place in my imagination, and I was deeply intrigued by her very dark appetites. I was enthralled by her past, by the mysteries in her present, and why she wouldn’t let herself love the man who loved her. There were lots of questions about Lydia Strong, and I was never happier over those ten years than when I was trying to answer them.

Taking the Plunge by E. L. Todd
The Living Dead Series (Book 2): World Without End by Albemont, L.I.
Witch of Christmas Past by Kendra Ashe
Peacekeepers by Walter Knight
The Reluctant Celebrity by Ellingham, Laurie
The Supremes: A Saga of Motown Dreams, Success, and Betrayal by Mark Ribowsky
Cut and Run by Lara Adrian
Shutter by Rhonda Laurel
The Mage of Orlon: The beginning by Gene Rager
Out of My Mind by White, Pat