Read The Devil at Large Online

The Devil at Large 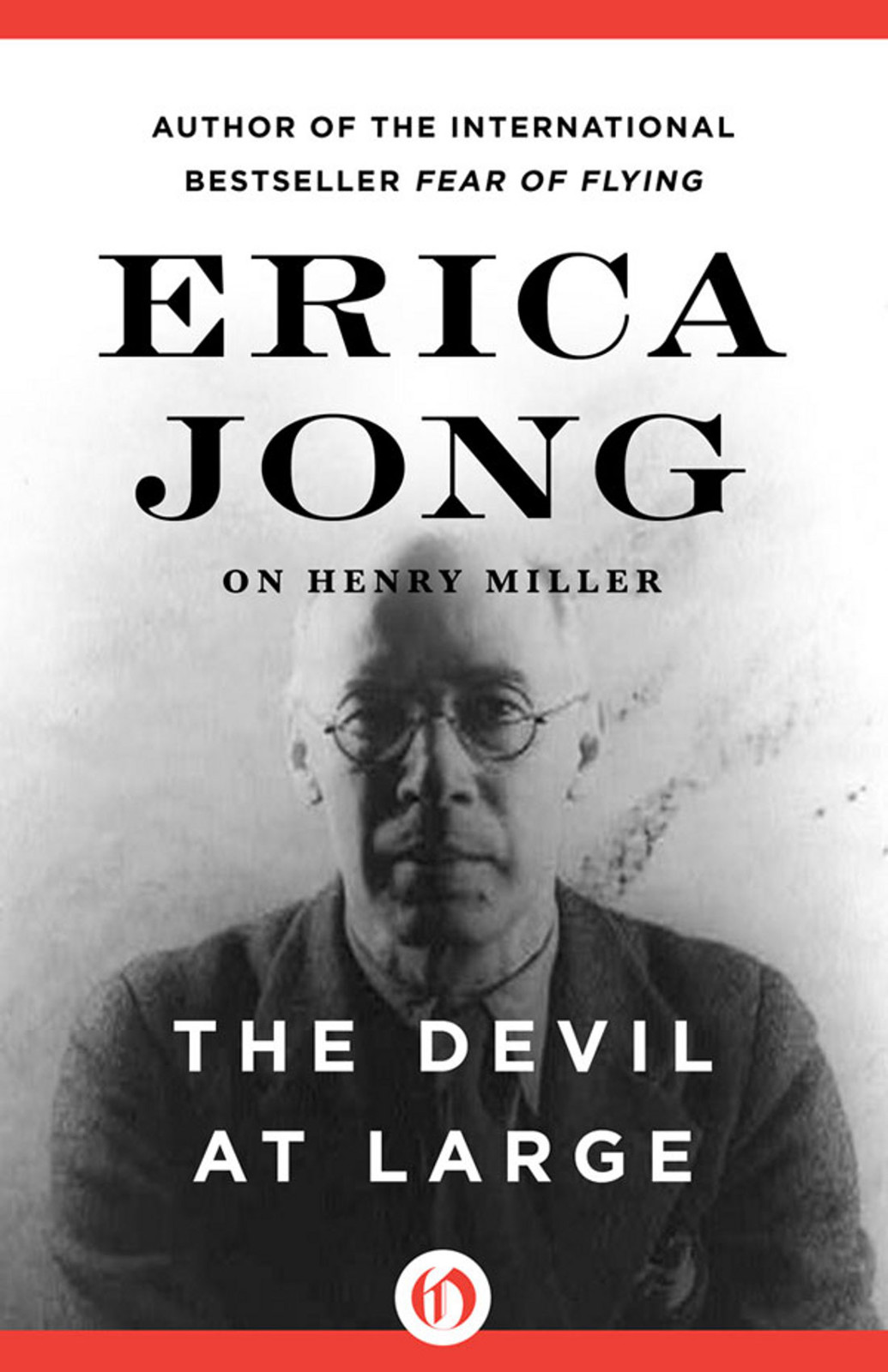 and to the memory of

These novels will give way, by and by, to diaries or autobiographies—captivating books, if only a man knew how to choose among what he calls his experiences, that which is really his experience, and how to record truth truly.

1. Born Hungry: Henry and Me

4. Crazy Cock in the Land of Fuck

5. The Last Man on Earth

6. Heart Filled with Light: Big Sur, Earthly Paradise, and After

7. Must We Burn Henry Miller? Miller and the Feminist Critique

9. Why Must We Read Miller? Miller as Sage

A Biography of Erica Jong

W
HY SHOULD WE CARE
about Henry Miller today and why should there be another book about him? Because we are no freer today than we were in 1934, when he published
Tropic of Cancer
, in many ways we are more enslaved. Because his message has
still
not been heard—and if he were to be alive today, we would probably be equally oblivious to what he is trying to tell us. (Perhaps we would be even more resistant, because we falsely believe we have dealt with our sexual fears and phobias.)

Miller remains among the most misunderstood of writers—seen either as a pornographer or a guru, a sexual enslaver or a sexual liberator, a prophet or a pervert. All the questions his life and oeuvre raise about the role of the writer in society, the impact of books on sexual politics, the impact of sexual politics on books, the threat of censorship to free speech and written expression are, unfortunately, as fresh today as they ever were.

What is the function of art in a society that has little use for anything but the most simple-minded entertainment or insidious propaganda? How does free speech survive? How does literacy keep a society free? How is our sexuality related to our intellectual honesty, our politics, our art? Miller’s work addresses these questions. And they are questions that desperately need answering in our time.

We do not see our society as one that is squashing freedom of expression on all sides because the very nature of expression has changed, hence the nature of censorship has changed. Our dominant forms of communication are visual, not verbal, and we seldom wish to analyze how the information that appears before our eyes as “news,” as “entertainment,” as “politics,” as “public affairs,” shapes our world and everything we think about it.

The fact that we are as oblivious to this manipulation as our puppetmasters wish us to be will anger some of us and provoke hearty denial in others. The most skillful manipulation looks like choice to those who are targeted. We may like to think we have free choice, but the truth is we can only choose between A and B. If, as Marshall McLuhan said, the medium is the message, then our addiction to visual images has already paved the way for our enslavement. It only remains for some unborn Hitler to learn how to use our pleasures to enslave us totally. As yet we use our media only for selling things—including, of course, political candidates. What will happen when someone masters the art of selling souls?

Henry Miller foresaw our world of restricted opportunity and widespread mediocrity and railed against it before it arrived. He understood that we would rather relegate sex to a commodity—alternately condemned and slavered over—than try to understand its deep and pervasive power in our lives. He became, like so many prophets—from Jesus to Savonarola—the victim of his own predictions. He railed against America’s sexual schizophrenia and he was rewarded by being banned, burned, pirated, deprived both of his livelihood and his power to reach his potential audience. He railed against the conformity and ugliness of America’s treatment of the nonconformist, the poet, the artist, and he became the victim of that treatment. Ironically, he was silenced first by close-minded puritans and then by open-minded feminists pursuing sexual honesty and gender-fairness. It fell to him to both express and to exemplify the role of the creative artist in a world that has increasingly little use for dissent, for art (except as a saleable item), for honesty, for any kind of entertainment or information but that which lulls the senses or sells a product—from a president to a war to a pair of jeans.

The worst of all this is that the lulling and the selling are often indistinguishable from each other. The airconditioned nightmare has come to be our waking reality—and we are all semisleepwalking to the flickering of our TV and computer screens.

There is a rumor abroad in literary America today that sex isn’t sexy anymore. We have done it all—and now with the tragedy of AIDS and a recalcitrant recession, the human hormones are exhausted.

I find this wishful thinking on the part of those who hoped sex would solve all their problems and, finding that it wouldn’t, decided to rejoin the religion of their ancestors: puritanism.

The sexual revolution was deeply superficial: it never eradicated either guilt or anhedonia. Given the excuse of a tragic epidemic, dyed-in-the-wool puritans masquerading as pagans decided that sex was boring and that writers like Henry Miller were therefore irrelevant. These trimmers—a lovely eighteenth-century term meaning those who cut their consciences to the times—never understood Eros at all. Eros is life force and if you pronounce it boring, you inadvertently announce your own death. Perhaps we don’t believe that sexual freedom will turn the universe from war to peace—but only the very young ever believed that,
anyway.
As we grew older, we realized that life is far more complex. Sex is not dead in the human psyche, it is only looking for new forms. The devastation of AIDS has given the zealots and vigilantes the excuse they needed to call again for censorship. But their motives are political, not sexual. The new slavery takes many forms: political correctness in the case of anti-First Amendment, pro-censorship feminists, supposed “family values” in the case of right-wing zealots. The message is the same: they want to tell us what to do and feel.

If Eros is life force, then censoring Eros is death. Henry Miller matters because he understood this; he demanded life more abundant above all. He did not use Eros promiscuously—even in his books. And he was not demanding that we do. What he
was
demanding was that we understand the connection between Eros and life. And we have still not understood. That is why I wrote this book.

I always knew it was to be an unconventional book—part memoir, part critical study, part biography, part exploration of sexual politics in our time. But I did not anticipate how difficult the task was to become or how much of my own bag as a writer I would have to unpack before I could begin to unpack Henry’s bag.

Henry once said to me, “When you write about me, make it all up!” Thereafter he proceeded to tape-record hours and hours of recollections, regale me with anecdotes, and inundate me with letters about writing, mysticism, art, his life and times.

Here was the paradox: Miller, supposedly the most autobiographical writer who ever lived, remained maddeningly elusive and could only be approached through the creation of a fiction. And I, too, so often accused of literal autobiography, found it nearly impossible to write in a voice of historical truth. What Miller said about D.H. Lawrence as he struggled with his book
The World of Lawrence
also seemed true of my struggles with Miller:

The only way to do justice to a man like [Lawrence] who gave so much, is to give another creation. Not explain him, but prove by writing about him that one has caught the flame he tried to pass on.

The more I thought about all I knew about Henry, Henry’s work, Henry’s life, the more impossible it became to find one voice in which to tell the story. I felt as I often did when beginning one of my own novels—lost in mist, looking for a voice … and a trail of breadcrumbs.

If Henry’s books were such obvious autobiographies, why was it so difficult to evoke the essence of the man? And if Henry’s life and books were one, why did I feel the uneasy sense that I was fudging the truth when I sat down to describe the man I knew?

I think it is because Henry Miller’s genius lay not in his subject matter, its often-cited explicitness about the body in particular, but rather in his invention of a new kind of fictive voice.

“I have no money, no resources, no hope, I am the happiest man alive,” he exults on the first page of
Tropic of Cancer.
It is his exuberance, his freedom, his bumptiousness that is infectious, not his chronicles of copulation. That sensuous terrain Henry Miller called
the land of fuck
is seductive because of its radical innocence, not because of its repetitive frictions. Rubbing, after all, is just rubbing. But ecstasy partakes of freedom, a glimpse of the divine. Henry Miller used the body to transcend the body, and something in his impish, mischievous voice implied that he could extend this freedom to us, his readers. That was his primal seduction—freedom, not fornication.

Art is always an energy exchange. The book, once opened, interacts with the mind of the reader to create an alchemical reaction. Again and again, people have said to me, in various ways:
I was dying in the prison of myself and Henry Miller freed me, gave me new life.
Henry Miller was a life-giver, a spiritual teacher, as much as he was a writer, and people turned to him and to his books, to be reminded in the prison of their days (as Auden would say) how to be free men and how to praise.

His freedom still terrifies. That is why he is critically dismissed, not taught in most universities, relegated to the remainder table. He is a seer. And what he sees is not pleasant. Yet we need his vision more than ever. Our freedoms are being taken away while we look at a flickering light show. More than ever we need to be enlightened. Our very survival depends upon it.

Perhaps enlightenment
is
the ancient function of the poet/prophet/seer. “The divine literatus” was Whitman’s term for this being. And Henry Miller had deep ties to Whitman, as he did to Hesse and Thoreau. He wanted to be more than just a writer; he wanted to be a prophet for his readers, and he became one—for good or for ill. We turn our backs on his prophecies at our peril.

As one of his “disciples”—I use the term ironically—I tell this tale of our connection. I have let Henry dictate the voice from wherever he hangs out nowadays.

Chapter 1
Born Hungry: Henry and Me

W
HEN OBSCENITY CROPS OUT
in art, in literature more particularly, it usually functions as a technical device … its purpose is to awaken, to usher in a sense of reality. In a sense, its use by the artist may be compared to the use of the miraculous by the Masters … the real nature of the obscene lies in the lust to convert.