The Disappearance of Irene Dos Santos 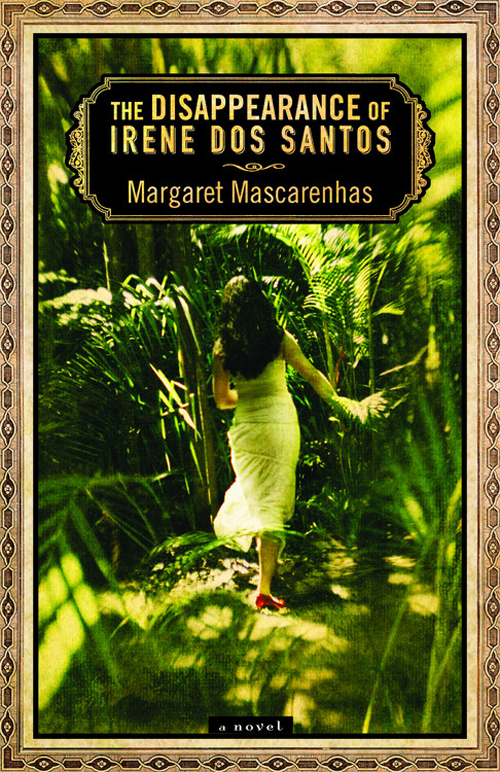 A Goddess, a Snake, and a Double-Edged Sword

For Saryu and Vinod

It is better to die on your feet
than to live on your knees.

The passiflora edulis produces an exquisite and fragrant flower, with five white sepals and a fringelike corona that is deep
purple at the base. Pollination is best under humid conditions.

I
n Lily’s dream it is raining and Irene thunders past on what appears to be a giant wild boar. “Vamos, vamos!” She leans down,
arm extended, hand reaching to pull Lily up in front of her. Lily also reaches, but their hands are wet, their fingers slip,
the grasp does not hold. In that split second, just as their fingertips separate, a lightning bolt strikes Irene full on the
chin; she falls back against the rump of her mount, which continues galloping away into the forest. The dream ends as the
honeyed song of the golden-winged Maizcuba announces the break of dawn in the postcolonial city of Tamanaco.

As the first light filters through the windows of the freshly whitewashed Quintanilla residence, Lily opens her eyes and stretches
her arms. Using her elbows as leverage, she laboriously hoists her body, over eight months heavy with child, into a sitting
position. She leans over to kiss Carlos Alberto, who is still asleep, but her belly gets in the way. She will kiss him later,
from a more comfortable position.

Easing herself awkwardly but quietly out of bed, she slips on an ankle-length kimono, black and white, and pads barefoot to
the kitchen. Her mother’s voice, the voice of her childhood, light and bright, accompanies her down the hallway, reminding
her not to mix too much water in the Harina P.A.N. for the arepas.

The sounds of cooking in the large, airy kitchen with the speckled gray Formica table, where Lily had dutifully done her homework
as a child, are the most comforting sounds she knows. It is in the kitchen that her mother reigned supreme, creating the perfect
arepas, buoyant and filling at the same time. Lily is certain she has never tasted arepas comparable to her mother’s. Or cachapas.
Or hallacas. Or mondongo. Or anything gastronomic. Although she has learned eight of her mother’s most familiar recipes, executing
them with military precision, the result is never as delicious. She suspects Consuelo of withholding a secret ingredient,
but Consuelo, laughing, says the secret is love. “When you are cooking you should pour your love into the pot. You are too
distraída, mi amor, thinking of other things.”

It was in the kitchen that Consuelo taught Lily to dance to the music of the transistor radio, which her father, Ismael, had
installed on the wall over the counter. Merengue and salsa—un, dos, tres...un, dos, tres—Consuelo’s full, rounded hips swirling
sensuously, Lily’s bony ones jerking, awkward. Afterward, their faces flushed with pleasure, they would go out to the garden
and pluck passion fruits from the loaded vine that Ismael had brought all the way from the rain forest. It took twelve passion
fruits to make enough juice to quench their thirst. Then her mother would teach her to draw, the subjects selected from items
at hand—a jar full of carnations, a bowl of fruit, her mother’s face. Lily could never quite master the art of shading, and
her renditions lacked depth.

Consuelo tells her daughter that the preparation of a meal is as much a creative act as drawing or painting. I won’t be around
forever, she says. Debes aprender. But since Lily does not acknowledge the possibility of a world in which her mother is not,
Consuelo might as well have said nothing at all. In any case, there is Marta, who cooks almost exactly like her mother.

Marta, an immigrant from Cuba, has been with the family almost as long as Lily can remember, first working for Consuelo and
now for Lily. Marta thinks of herself as Venezuelan first and Cuban incidentally. Every Sunday morning she takes an hour-long
bus ride to Caracas to visit her Trinidadian friend José Naipaul, who is dying of lung cancer, returning by noon.

On Sundays, Marta is not expected to cook; Lily is in charge of breakfast, Carlos Alberto of lunch, and dinner is comprised
of sandwiches from the week’s leftovers. The only food Carlos Alberto knows how to prepare is steak, which he marinates in
olive oil and parsley, sears, and serves rare, accompanied by heart of palm salad, chilled beer, and a butter-yellow rose
from the garden. After dinner they play cards, or sometimes dominoes, which Marta prefers to cards. By now their Sunday routine
is established, automatic; they never give a single thought to a different type of Sunday.

Though it is from her mother, a painter, that she learned to draw, it is architecture that Lily has chosen as her profession.
Architecturally, and in spite of her self-inflicted culinary deficiencies, the kitchen is her favorite design subject as well
as her favorite room in the house. When designing a house, she always saves the kitchen for last, like dessert. She works
out her preliminary drawings, freehand, on the kitchen table, an arrangement that works well, since it gives Carlos Alberto
full occupancy of the tiny study, where he pens his stories for the producers of telenovelas. Since Lily’s best childhood
memories are from her mother’s kitchen, she has designed her own as almost a replica of Consuelo’s, separated from the living
room by a wide, open arch instead of a wall, though her kitchen table is wood, not Formica. Thus, the living room and the
kitchen are one. There is no dining room.

Lily doesn’t like it when Marta points out similarities between her own life and her mother’s, certain that her taste in kitchen
layout is where the resemblance ends. For example, Lily would never allow her husband to roam the countryside as he pleases,
spending more time away than at home.

It is not that her father doesn’t love her mother, she knows this. It is just that he has other, perhaps equal, loves. Poetry.
Music. The Gran Sabana. The life of one such as her father, who is constantly traveling for inspiration in the jungles or
the plains, is unpredictable. Lily does not appreciate unpredictability. She reads the endings of novels first and never watches
telenovelas, not even those written by her husband, which undergo many nerve-racking twists and turns, and take too long to
come to a resolution. In her work and in her life, she likes straight angles and areas with well-defined, proportionate boundaries,
efficiency of space. She has installed hidden storage units in her kitchen, stocked with utensils and household supplies,
in neat, regimented rows. She stows her passions and desires in the same way. Spontaneous, unexpected bursts of emotion are
quickly reined in, put in their place, though she finds such exercise of control increasingly difficult ever since she became
pregnant. But this, she believes, is simply a matter of hormones; it will pass as soon as her body is her own again.

“Why don’t you let me make the breakfast today; I’ll be out in a moment,” calls Consuelo.

She pours the milk and the water for coffee into separate pans to boil. She lightly fries the arepas until they have formed
a skin, places them on a brightly hand-painted plate, a souvenir from her father’s travels. She likes this plate because,
besides being cheerful and attractive, it can go in the oven with the arepas.

She squeezes fresh orange juice into a glass pitcher and heaps coffee into the old-fashioned French percolator, which she
received as a wedding present from her godmother, Amparo Aguilar. From the refrigerator, she removes butter, queso blanco,
and ham, and places them on another, less dramatic plate. Around these, she symmetrically arranges slices of avocado sprinkled
with salt, pepper, and a dash of lemon juice. She sets the table for breakfast. Pouring two cups of coffee, to which she adds
frothy boiled milk and a single spoon of sugar, she takes her seat at the table. While she waits for her mother to join her,
she slips her hand into the pocket of her kimono, draws out the letter from Irene, reads it again.

Consuelo enters the kitchen, eyes still puffy with sleep, and kisses her daughter lightly on the lips.

“Buenos días, Mami,” says Lily, placing the letter back in her pocket.

“Buenos días, cariño. And what were you reading just now with such concentration?”

“I found a letter yesterday in a box of old school things. It revived so many memories.”

“Good memories, I hope?” says Consuelo. “Are you glad I didn’t throw all your things away in spite of all your criticisms
about hanging on to old junk?”

“Yes, you were right, I’m glad you kept them. The letter is from Irene. Do you remember her? Te acuerdas, Mami?”

“I wish I knew what happened to her.”

Not knowing what happened to Irene bothers Lily in the manner of a faint itchiness. Without that knowledge, she feels incomplete,
unresolved, part of a never-ending story. But her mother changes the subject abruptly, “Have you heard from your madrina?
She promised to be here in time for the delivery of your baby.”

“I’m sure she’ll be here; she knows we’re depending on her. Anyway, Mami, about Irene—”

Carlos Alberto comes into the kitchen, sniffing the air hungrily. He is already dressed in brown corduroys and a black pullover,
his Sunday uniform. Carlos Alberto kisses his mother-in-law good morning and moves behind Lily’s chair. He bends and plants
a wet, sucking kiss on her neck in the special place that gives her goose bumps. He smells of lime soap and shaving cream.
She turns her head to catch his lips with hers, but the kiss is interrupted by the doorbell.

Darkside by P. T. Deutermann
Orphan #8 by Kim van Alkemade
State of Wonder by Ann Patchett
Lovers & Haters by Calvin Slater
Not the Best Day by Brynn Stein
Beautiful Mornin': The Broadway Musical in the 1940S by Ethan Mordden
The Biggest Part of Me by Malinda Martin
The Seduction of Sebastian St. James by Rachel van Dyken
Stillness in Bethlehem by Jane Haddam
Romancing the Holiday by Helenkay Dimon, Christi Barth, Jaci Burton