Read The Dive: Birth of a Wordsmith Online

The Dive: Birth of a Wordsmith 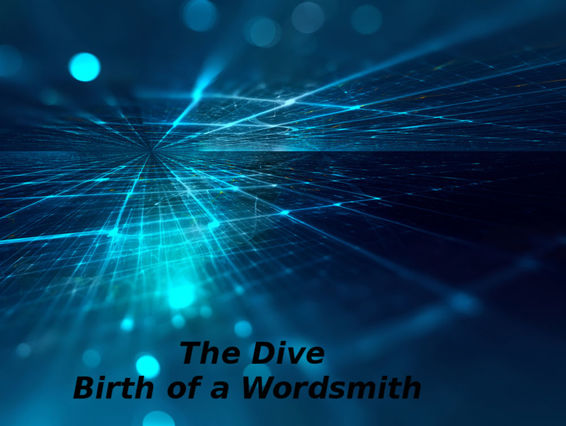 The Dive:
Birth of the Wordsmith

In the past, people played
video games by using a controller, or watching through a monitor.
Then, the technology came for 'semi-virtual' reality, where players
could wear a headset that gave them a full range of vision. However,
they were still restricted in what they could do by the commands the
game had programmed. Even later, when 'true' virtual reality was
implemented, with the use of Link capsules, the game world was far
from perfect. Non-player characters had limited reactions, and often
only preset dialogues were available to interact with them.

Lately, a new game was
released. The Dive offered a fully real world for players to immerse
themselves in. What's more, the game had no known developer, no
testing period, and was free to download via the Link capsules. This
caused it to be the source of much suspicion for the first few
months, before the reports came in from the game's players. The
results were unanimous, The Dive was the most realistic game to be
released to date, with nearly limitless freedom to choose.

While vague posts such as
this were common among gaming forums, there weren't any specifics. In
fact, some people claimed that any time a post appeared to contain
specific details about The Dive, it was instantly removed from the
forum, meaning that all knowledge of the game had to be acquired
first-hand. Still, who was it that had the power to create this game,
release it freely, and monitor information on it all while remaining
anonymous? Perhaps, that is the greatest mystery of The Dive.

My name is Christopher
Weston, a 25 year old college student. Currently, I am enrolled in a
literature degree, so honestly my job prospects aren't that high
outside of becoming a writer or reporter. However, I've never quite
been able to get enough of books. One day, I hope to become a famous
novelist, but that dream seems to be quite a ways off.

“
Chris, I heard
about this new game, you should really try it.” Kevin, one of
my friends from university told me after class one day. “It
doesn't cost anything, and from what I've heard it's great!”

“
Yeah, yeah.”
I may not act like it, but I enjoy roleplaying games as well. Maybe
it's the idea of creating your own story, what binds me so much to
books. “I'll check it out if it's free. What's the name?”

“
It's called The
Dive. Doesn't sound like much, right? Just give it a shot, you'll
thank me tomorrow!” Kevin laughed and waved me off as he turned
to head home.

Even if he says that,
how impressive could a free game really be? Well, nothing wrong with
giving it a shot,
I told myself as I made my
own way home as well. My Link capsule sat in the corner of my room,
looking like a long thin bed. The mounted headpiece was designed to
easily slide in place, allowing the player to enjoy the game without
being in an awkward position.

Since I live alone, it
didn't take me long to prepare myself a simple dinner. And since
there was no homework, I decided to give Kevin's suggestion a try.

Laying down on the bed of
the capsule, I slid the Link headpiece over my eyes, closing them in
the process. It wasn't really necessary, but I always preferred to do
so.
Start.

Within a moment of that
thought, the darkness behind my eyes was gone, and it was as if light
was pouring from all around me. When I opened my eyes, I was now in
the Internet. With the development of Link capsules, traditional
means of accessing the internet became obsolete, and now users could
freely explore with the new interface.

Raising my right hand, a
small white menu appeared in front of me. Selecting the first option,
Search, I typed in the name of the game, The Dive. After that, the
typically bright surroundings of the net darkened, and I found myself
standing in a small room with a single console. Above was a message
written in red.
Would you like to experience a
true virtual world?
The message asked,
suspended above the console which held two buttons. One said Yes, and
one No.

“
This seems a bit
dramatic, but why not..” I muttered to myself, before pressing
the Yes button. Again the world went black as the game immediately
downloaded itself into the Link capsule without asking for any
further information. If anything, that was most unusual. If it was a
scam, they would have tried to get something to use for financial
gain.

A voice rang out from
around me. “Welcome to The Dive. As you are a new player, you
are required to first make a new character.” Something like
this was common in Link games, a typical first time message. “Please
select your race from one of the following. Human, Dwarf, Goblin,
Elf.”

Only four races? Well,
I guess I shouldn't have expected much more than that.
I thought about it for a moment, and shrugged. “Human.”

An avatar appeared in
front of me, looking exactly like my typical appearance, except the
clothing. The avatar was just shy of six feet, with a thin build,
dirty blonde hair, and hazel eyes. Rather than my street clothes, it
was wearing a shabby outfit, like you'd expect to find on a beginner
in most MMO games. “Human. The most widespread of the four
races, they are not restricted from learning any non-racial
abilities. Please confirm your choice.”

“
Confirm.” I
responded with a sigh. So far, it's the same as any other game.

“
At this time, you
are allowed to freely alter the appearance of your character. Do you
wish to do so?”

Looking the avatar over, I
shook my head. “No, this is fine.”

“
Understood.
Finally, please select a name for your character. No numbers are
allowed to be used in a character's name. After which, you will
automatically be sent to a random beginner town within the human
kingdom.”

Hmm... better think
about this. With the races available, it's obviously a fantasy game.
Though, they didn't ask for a class, so maybe that will come later.
Either way, I need to pick something I'll be able to deal with for
the rest of the game.
“Jin.” I
told the voice, figuring that the name would be taken, if names were
unique. If not, it was a simple enough name that I could deal with.

“
Understood.”
Suddenly, the avatar in front of me disappeared. Or would it be
better to say that I replaced it? Above me, a bright yellow light
began to shine over the area. Raising one of my hands instinctively,
I blocked out the light. At the same time, I started to hear voices
surrounding me, the sounds of footsteps.

It didn't take me too long
to understand, the light was the sun and I had appeared just as the
initial voice told me I would. Looking around, I first noticed
something that hadn't been present in other Link games I've played
before. Whether it was the wind in my hair, or the cloth against my
skin, I was able to feel things as if I really was the character.

Also, though I must have
just materialized in the center of town, nobody made any mention of
it, going about their business as if nothing happened. Deciding that
I should check, I raised up my right hand as normal for if I wanted
to access the Internet's interface. Nothing happened. “Character
information.” As I said that, a screen appeared in front of me,
with a picture of my character next to a series of stats.

Looks like a normal
starter character. Gild would be currency, then? But what’s
that about talents?
I began asking myself as
I reviewed my character information. After a few moments, another
screen appeared in front of me, replacing my character.