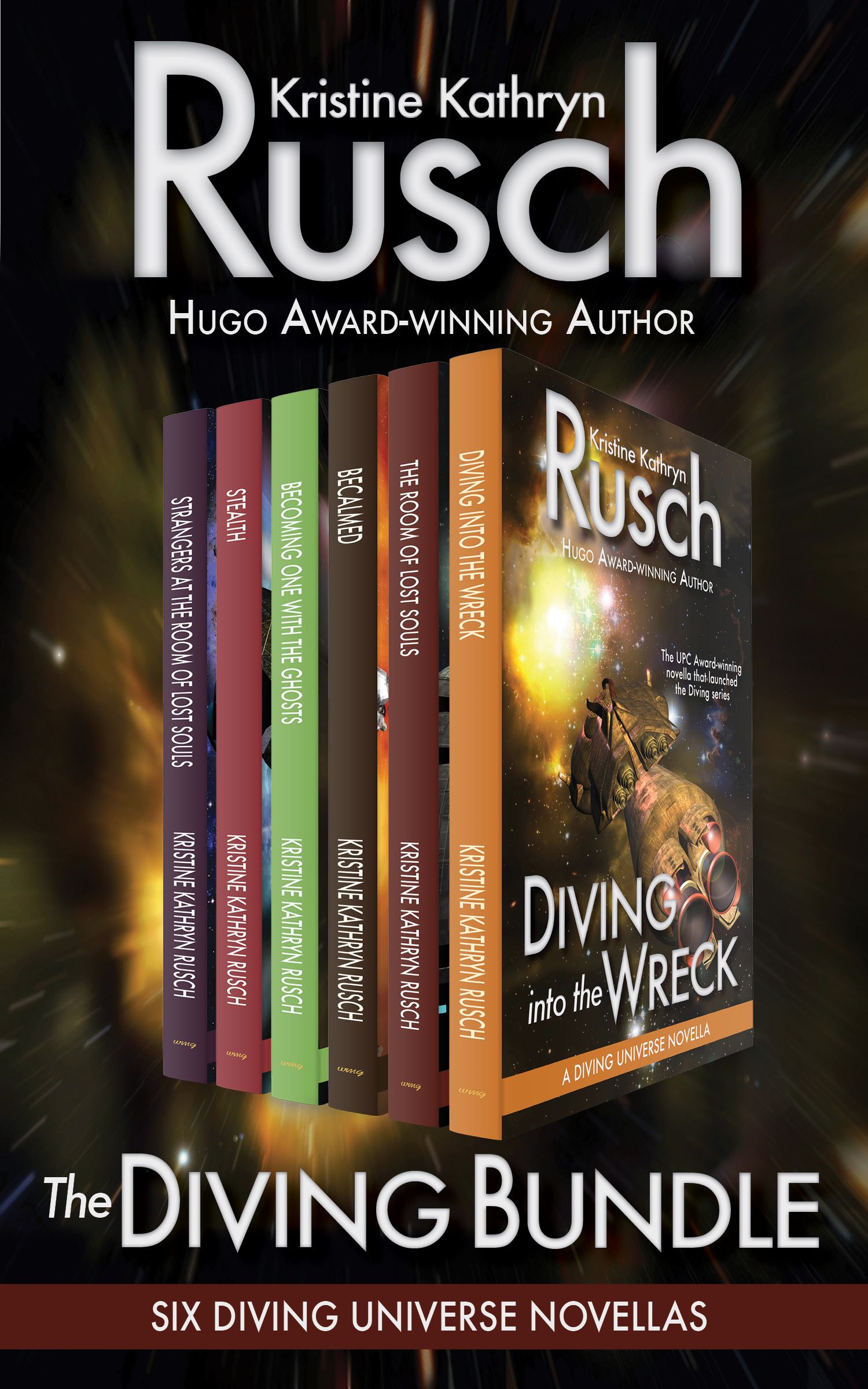 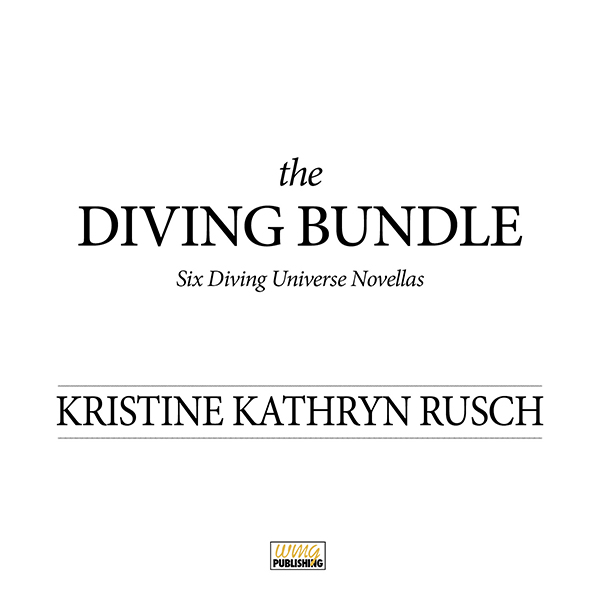 First published in 2013 by WMG Publishing

“Becoming One with the Ghosts” by Kristine Kathryn Rusch was first published in
Asimov’s SF Magazine
, October/November 2010

“Strangers at the Room of Lost Souls” by Kristine Kathryn Rusch was first published by WMG Publishing, 2013.

This book is licensed for your personal enjoyment only. All rights reserved. This is a work of fiction. All characters and events portrayed in this book are fictional, and any resemblance to real people or incidents is purely coincidental. This book, or parts thereof, may not be reproduced in any form without permission.

Diving into the Wreck

The Room of Lost Souls

Becoming One with the Ghosts

Strangers at the Room of Lost Souls

AT A CONVENTION several years ago, the editor who would eventually buy the novel
Diving into the Wreck
for his brand-new book line told me he wasn’t sure if he should buy the book. His concern? That the first two parts of the novel had originally appeared in
Asimov’s SF
as novellas. It didn’t matter to him that both novellas had won the
Asimov’s
Readers Choice award for the best novella of the year. Or that they had received international awards as well.

He worried that the previous publication would taint the novel somehow.

I leaned back in shock. Even though he professed to know the science fiction field, he apparently did not know it at all. In sf, it’s customary to publish short pieces before the longer work appears. Books from Nancy Kress’s
Beggars in Spain
trilogy to Connie Willis’s time travel novels had appeared in short form first, as did parts of Joe Haldeman’s classic
The Forever War
or one of my very favorite pieces (in both forms), Daniel Keyes’
Flowers For Algernon
.

That this young editor thought it unusual to publish a book after the shorter works appeared showed how little he knew the field. I had to coach him on ways to market to book—using the novellas as a hook, not as a detriment. Yes, readers had seen parts of the book, but not
all
of the book. And readers would buy the novel in part
because
they wanted to read the rest of the story.

I write out of order, and I never know what pieces of a story I have until I finish that segment. I initially thought “Diving into the Wreck” was just a novella, even though I knew what the Dignity Vessel was and how that myth/legend had come about.

I had no idea the story was tied to “The Room of Lost Souls” until Boss started narrating that novella to me. Then I wrote what I thought was the next novella, but couldn’t finish it. That novella turned out to be the opening section of the novel
City of Ruins
, which does not stand alone. I had to back up and figure out what was going to happen next to finish the first Diving novel.

I learned years ago that it’s more fun to tell myself stories to complete my world-building than it is to write a “bible” or some kind of background material. “Becoming One With The Ghosts” started as a way to explain the opening of
City of Ruins
to myself. Parts of the novella are in the novel, but not in the same order. (My mind is a jigsaw puzzle mess.)

As I wrote that book, I needed to figure out what mission Coop had just completed. So I wrote “Becalmed” which, so far, isn’t in
any
of the novels. I suspect some day it will be.

“Stealth” circles back to a character we first meet in “Diving” the novella—Squishy. “Stealth” is her story, just like
Boneyards
is, in part, her story. “Stealth” let me explain Squishy to myself. (And yes, parts of “Stealth” are in
Boneyards
in different form.)

“Strangers at the Room of Lost Souls,” introduces a new character who becomes quite influential in
Skirmishes
, the fourth Diving novel. She’s got a role in several books, I think. “Strangers” was fun to write because it’s a companion piece—literally—to another novella called “Encounter at Starbase Kappa,” which
Asimov’s
will publish in its October/November 2013 issue.

Both novellas get sewn together in
Skirmishes
, and they’re so closely related that I didn’t feel right offering Sheila Williams of
Asimov’s
both novellas. That’s why WMG Publishing did “Strangers” as a standalone volume before
Skirmishes
came out.

There are two other novellas in the Diving universe as of this writing, and neither of them are parts of novels (yet). The first, “The Spires of Denon,” was an
Asimov’s
cover story in 2009 (and a finalist for the Readers’ Choice award). WMG reprinted the novella in 2011. I have no idea to this day how “Spires” fits in the overall set-up, although I trust that I’ll figure it out.

The other novella, “The Application of Hope,” appeared in
Asimov’s
in the August 2013, issue. The novella shows what happened to Coop and his team from a brand-new perspective, which is one that I’m quite excited about. “Hope” will become a standalone WMG novella sometime in 2014.

The novellas are fun—and the readers seem to like them. So far, the Diving novellas have won three
Asimov’s
Readers Choice awards and have been nominated for three others. They’ve received two prestigious UPC awards in Europe, and have been reprinted in several different languages. They’ve provided the inspiration for covers for
Asimov’s
as well as
Esli
Magazine in Russia. And they’ve helped me figure out what I’m doing next.

I know there will be other Diving novellas long before I’m done telling the story of Boss and her group. I have several planned, plus I have a lot of world building to do, so I know that even more will crop up. The neat thing about writing novellas first is that element of surprise. Did I know that Coop had visited the Room of Lost Souls? Yes, but I didn’t know when until I wrote “Strangers” Did I know that Squishy hated stealth tech? Yes, but I didn’t know why until I wrote “Stealth.”

Boss herself started as a mystery to me when I wrote “Diving.” I still don’t know her real name. She won’t tell me—or anyone else it seems. It doesn’t feel quite right to call her Boss either, since that’s not how she thinks of herself. But that’s what everyone else calls her, so I use that shorthand when I’m not writing about her.

The
Diving
universe is constantly evolving, both on the page and in my own imagination. I’m glad you’ve decided to join me on the journey—and I hope in a few years to do another bundle of “Diving” novellas. I’m already three novellas into that bundle, and I’m sure there will be more. I just don’t know when the others will appear—or what, exactly, they’ll be about.

Fortunately, WMG Publishing understands how the novellas and novels work together. It’s fun to continue a science fiction tradition—writing both long and short in the same series. I hope to do this for many years to come.

DIVING INTO THE WRECK

WE APPROACH THE WRECK in stealth mode: lights and communications array off, sensors on alert for any other working ship in the vicinity. I’m the only one in the cockpit of the
Nobody’s Business
. I’m the only one with the exact coordinates.

The rest of the team sits in the lounge, their gear in cargo. I personally searched each one of them before sticking them to their chairs. No one, but no one, knows where the wreck is except me. That was our agreement.

They hold to it or else.

We’re six days from Longbow Station, but it took us ten to get here. Misdirection again, although I’d only planned on two days working my way through an asteroid belt around Beta Six. I ended up taking three, trying to get rid of a bottom-feeder that tracked us, hoping to learn where we’re diving.

I’m not hoping for loot. I doubt there’s something space-valuable on a wreck as old as this one looks. But there’s history value, and curiosity value, and just plain old we-done-it value. I picked my team with that in mind.

The team: six of us, all deep-space experienced. I’ve worked with two before—Turtle and Squishy, both skinny space-raised women who have a sense of history that most out here lack. We used to do a lot of women-only dives together, back in the beginning, back when we believed that sisterhood was important. We got over that pretty fast.

Karl comes with more recommendations than God; I wouldn’t’ve let him aboard with those rankings except that we needed him—not just for the varied dives he’s gone on, but also for his survival skills. He’s saved at least two diving-gone-wrong trips that I know of.

The last two—Jypé and Junior—are a father-and-son team that seem more like halves of the same whole. I’ve never wreck dived with them, though I took them out twice before telling them about this trip. They move in synch, think in synch, and have more money than the rest of us combined.

Rose of No Man's Land by Michelle Tea
Seize the Fire by Laura Kinsale
Black Mirror by Nancy Werlin
Beauty (A Midsummer Suspense Tale) by King, Asha
Iron Orchid by Stuart Woods
The Raven's Moon by Susan King
The Outlaw King: The Line of Kings Trilogy Book One by Craig Saunders
Stir Me by Crystal Kaswell
Watson, Ian - Novel 06 by God's World (v1.1)
Carrier 02: Shadow of the Mark by Leigh Fallon