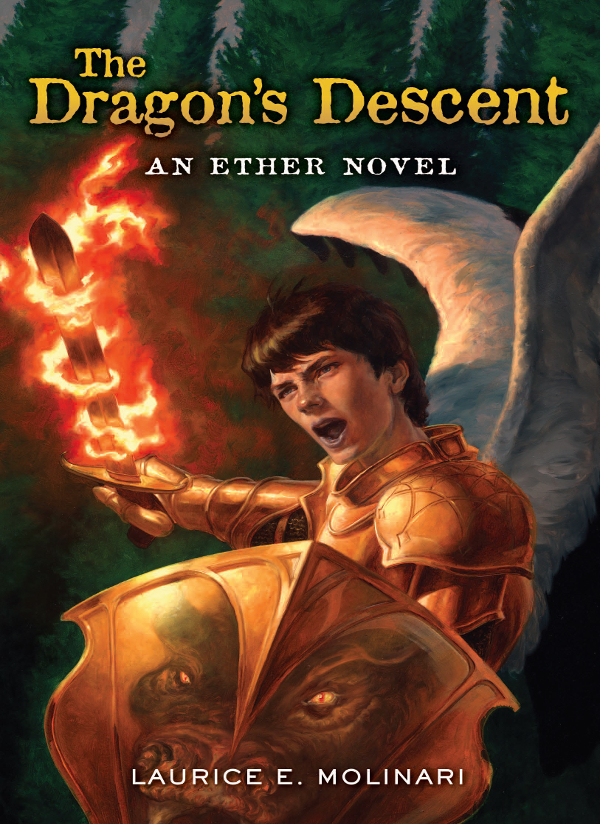 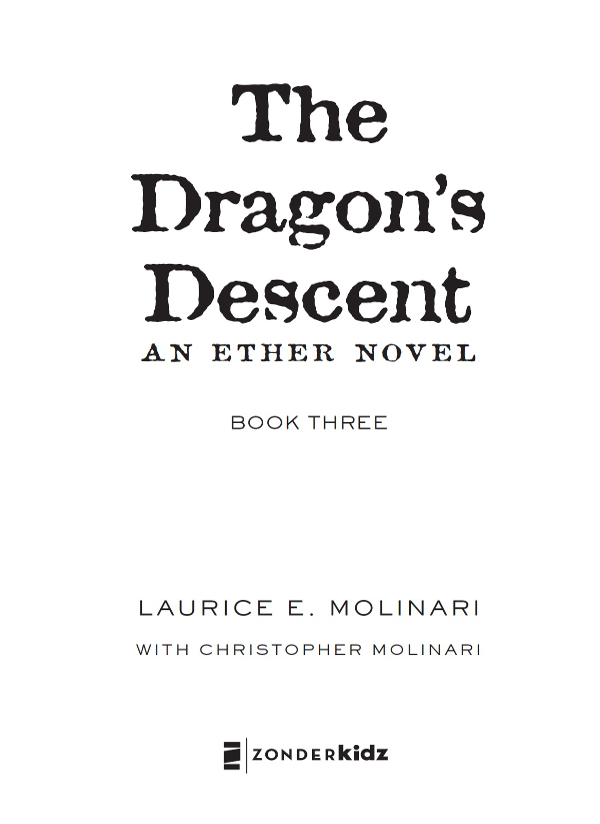 The Ether: Vero Rising
(Book One)

Zonderkidz is a trademark of Zondervan.

For Grace and Luke: may the angels always keep watch over you

14. The Other Side of the World

17. Ascent into the Night

22. Book of the Angel Raziel

A
panther's piercing gold eyes gazed through shimmering leaves as it relaxed on the well-worn curve of an ancient tree branch. As the large, black cat looked upon the green, conical mountain in the distance, it yawned, losing the fight to an afternoon nap. Above, a chattering family of langurs carelessly stuffed their gray-black faces to their heart's content, allowing shreds of leaves to fall onto their white beards. Below, in the marshy lowland, a small herd of shaggy-coated Sambar deer stood shoulder deep in the water, eating water lilies and refreshing themselves in the cool water. A petite white egret hitched a ride on the back of one of the deer, pecking insects from its fur while green and brown frogs made their presence known with boisterous croaks.

Silently, heavy clouds rolled into the jungle, burying the tranquil afternoon in mist. The vibrant ecosystem was
transformed into a blur of fog in a moment's time. And then, just as quickly, the mist dissipated, revealing the now quiet darkness of night. On the face of the distant mountain, an illuminated trail wound its way up the mountainside. The zigzagging path seemed endless, lit up by thousands of flickering lights that stretched into the stars.

Clover woke with a start. After sweeping her long blonde hair from her face, she grabbed a small journal and a pencil off her nightstand and began to cover the blank pages with detailed images from her dream. Moments later, she glanced at her old princess alarm clock: 5:22 in the morning. She would need to be up for school in an hour, but something screamed to her that she had to record what she had seen before the images faded from memory.

Clover had kept a dream journal ever since she was a little girl. She felt her dreams were special, and as she grew older she found it harder and harder to shake themâin fact, her dreams had always been so vivid, so real to her, that she often needed to stay in bed for a few moments to reorient herself after waking. Clover knew the images she dreamt were trying to tell her something, and had discovered that many did hold messages. These visual messages used to terrify her, but finally, at the ripe old age of fifteen, she had learned to embrace themâand not only her dreams, but also her visions. She had once thought she was seeing hallucinations, that she was crazy. But in time, she had come to realize she saw real things other people could not see. And she saw them because of Vero, her guardian angel brother. Her prophetic gifts were meant to somehow support Vero in his mission. Of this, she was one hundred percent sure. And that's the reason she took such painstaking efforts to
sketch the mountain, the animals, and jungle as accurately as possible.

Clover walked past Vero and playfully boxed his ear while he sat in the kitchen eating an egg-in-the-hole. It was his favorite breakfastâan egg fried inside a hole cut in the middle of a slice of bread.

“What was that for?” Vero scowled, tugging on his left ear.

Clover opened the refrigerator door and pulled out a peach-flavored Greek yogurt. “Making sure you were awake.” Clover smirked then picked up a spoon from inside a drawer before slamming it shut with her hip. “Where are Mom and Dad?”

“Dad went in to work early,” Vero said, shaking the saltshaker over his egg. “And Mom's out jogging.”

“For what?” Vero asked, but Clover was already gone.

When she rushed back with her dream journal, he had stuck his fork into his egg, and yolk spilled out onto the fried bread. Before he could take a bite, however, Clover slammed the book down on the table with a thud. It was open to a sketch of the landscape from her dream.

“Does this mean anything to you?” she questioned urgently and curiously.

Vero's gray eyes narrowed as he studied the drawing. He looked thoughtfully at it, as if trying to trigger some sort of recognition. He focused on the winding trail of lights up
the side of a steep mountain that rose high above hills, and the exotic animals below.

“Are you sure?” Clover tapped her index finger on the drawing. “Because I have a really strong feeling about this.”

“Nothing,” Vero mumbled in between bites of egg. “Maybe in time, it'll make sense.”

The front door opened and quickly shut. Clover snatched the journal from Vero and snapped it shut just as their mother, Nora, walked into the kitchen. Nora's face was bright red. Sweat had formed on her forehead.

“The bus is almost here! What are you doing still eating? Go! Get ready!” Nora yelled, out of breath.

“Shoot! I gotta brush my teeth,” Vero exclaimed, jumping up from the table and sprinting out of the room.

“I'm ready,” Clover said to Nora. “But I totally miss when Molly would pick me up.”

“Well, you better make friends with the bus, because Molly graduated, and I'm sure not driving you.” Nora studied Clover's face. “Why do you look so tired? Were you on your phone last night? Because you know, no electronics in your room.”

“No, Mom.” Clover rolled her eyes. “I just woke up super early.”

“You probably heard Dad. He went to work while it was still dark,” Nora said as she pulled a bottle of flavored water from the fridge. “He's worried about his project.”

“He worries about every project,” Clover said.

“Why don't you want me to see that?” Nora asked, motioning to the journal tucked under Clover's arm.

“You don't have to show me. I'll just sneak a peek like I normally do once you're on the bus.” Nora smiled.

“You do?!” Clover asked with a look of outrage.

Nora laughed. “Oh yeah! And I also throw out all your old toys too!”

Clover eyed her, not sure if she was joking.

“But you have no problem showing Vero,” Nora said, a bit hurt.

Clover considered for a moment. “Fine,” she said as she handed her mother the well-worn journal. “It's on the next-to-last page.”

Nora flipped to the sketch of the mountain. Clover watched her mother's eyes soften as she studied the drawing. At forty-two, Clover thought her mother looked great. Sure, she had to highlight her hair to remain a blonde, but she could still fit into most of her college clothing, and last week when Nora bought a bottle of champagne for a housewarming gift, she was carded! Clover hoped she had inherited her mom's genes.

“Was this in one of your dreams?”

Clover nodded. Down the block, the school bus horn blared.

“Gotta go!” Clover snatched her journal from Nora's hands and zipped it inside the front pocket of her purple backpack. “I'll take it with me. That way you won't be tempted to snoop around for it.” Clover smiled.

Bind, Torture, Kill: The Inside Story of BTK, the Serial Killer Next Door by Roy Wenzl, Tim Potter, L. Kelly, Hurst Laviana
Pencil of Doom! by Andy Griffiths
Lovers and Liars by Brenda Joyce
First Test by Tamora Pierce
Veneficus: Stones of the Chosen by Chris Page
House of Earth and Blood (Crescent City) by Sarah J. Maas
Scandal by Patsy Brookshire
Catastrophe: An Investigation Into the Origins of the Modern World by David Keys
The Folded Clock by Heidi Julavits
Concubine's Tattoo by Laura Joh Rowland