Read The End of Dieting: How to Live for Life Online

The End of Dieting: How to Live for Life 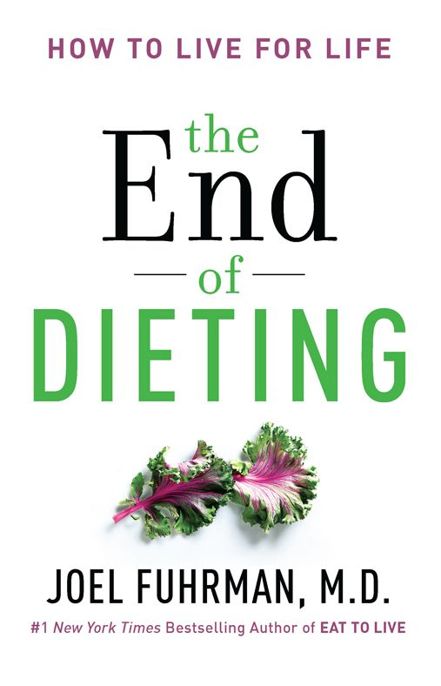 I dedicate this book to all those who fight to save and improve our planet and the lives of its inhabitants. May our collective efforts bring a healthy future for our children and future generations
.

THE END OF DIETING PLEDGE

THREE
: The End of Dieting

FOUR
: The Power of Real Food

The End of Dieting Pledge

We’ve been sold a false bill of goods.

Diets don’t work, and they’re terrible for our health.

Every diet is doomed to fail—whether it’s counting calories or measuring portions or playing around with the ratio of fat, carbohydrate, and protein on your plate. Even if you do lose some weight, it usually returns within two years—and then some. In fact, the number of people who successfully lose weight through dieting and keep it off for the rest of their lives is fewer than two out of one hundred.
1
Fewer than two out of one hundred
. That’s less than 2 percent. That means that more than 98 percent of people who lose weight gain it back, which is often unhealthier than not losing it at all.

Constant fluctuations in weight and drastic changes to our diet are dangerous and likely to increase the risk of cardiovascular diseases.
2
In other words, we are literally killing ourselves in pursuit of a small waistline.

With its trendy, eat-this-not-that protocols and flavor-of-the-month celebrity weight-loss programs, the billion-dollar diet industry is hard at work making a mess of how we eat and how we think about food, while simultaneously selling temporary short-term fixes at the expense of our permanent long-term health.

And we’ve bought it, hook, line, and sinker.

As a result, our waistlines are thicker, and we’re faced with an exploding worldwide epidemic of heart attack, stroke, diabetes, and cancer. You didn’t fail those diets; the diets failed you.

We deserve better—better information, better food, better health. You deserve information that will work for you, so you never need to diet again.

Superior nutrition will transform your body and put an end to food addictions and cravings once and for all. My nutritarian way of eating satisfies all the dimensions of hunger. As you begin to eat healthful, nutrient-dense foods, such as vegetables, fruits, beans, nuts, and seeds, you flood your body with the vitamins, minerals, and phytochemicals that it so desperately needs. You will not only see immediate weight-loss benefits, your food preferences will also undergo a metamorphosis as you begin to crave health-supporting food instead of disease-causing food. The foods that once meant so much to you lose their appeal. And your bad emotionally based eating habits will start to disappear along with your waistline.

The nutritarian diet style makes it almost impossible to become overweight because you eat to satisfy true hunger, not addictive cravings. The foods you eat can be consumed in bountiful quantities because they are rich in nutrients, yet low in calories. You feel satisfied.

These next few sentences contain the secret to making this body transformation work every time, and it is my pledge to help you achieve the success you so deserve. In the beginning, let my brain call the shots, not yours. What you’ve done in the past hasn’t worked out. We need to repair your brain first, and I’m going to show you how to do it. Don’t make decisions about what to eat. Let me make those decisions for you. Get away from the stress of dieting and deciding what to eat and what not to eat almost every waking moment of the day. Don’t judge how you’re doing, or whether the foods you’re eating are working. Just eat them. Within a week, the magic will begin.

The End of Dieting
is the book and lifestyle you deserve. The dietary and nutritional advice presented in the following pages not only enables you to stop dieting for good, it prevents and reverses disease. And best of all, you can adjust it to meet your individual food preferences and individual dietary needs, which will allow you to reclaim, once and for all, your right to excellent health.

S
ince its publication in 2003,
Eat to Live
has sold more than 1 million copies and has been translated into sixteen languages. It reached number one on the
New York Times
bestsellers list and has remained on the list for years, while hundreds, if not thousands, of other diet books have come and gone.

My goal for
Eat to Live
wasn’t fame or fortune, however. When I sat down to write the book, I simply wanted to educate and motivate people to achieve superior health, whether they wanted to lose weight, feel great, or reverse a chronic disease. I had no idea the book would take off, or that it would resonate so deeply with people all around the world. It seemed everyone started using that phrase—eat to live—to describe the overwhelmingly successful eating style detailed in the book. And to this day, I receive a seemingly never-ending stream of e-mails and letters describing miraculous health changes, thanks to the book.

The secret behind
Eat to Live
’s popularity is simple: It didn’t promise a quick fix. Unlike fad diets that promise easy and immediate results,
Eat to Live
laid out vital information about food and healthy eating that allowed readers to become experts in nutrition. The book essentially handed over to its readers the keys to successful weight management so that they were in control of their health destiny.

At the center of
Eat to Live
is a simple health equation, the core concept of my nutritarian program:

Your health is predicted by your nutrient intake divided by your calorie intake.

I call this core concept the
nutrient density
of your diet. Food supplies us with both nutrients and calories (energy). All calories come from only three elements: carbohydrates, fats, and proteins. Nutrients, on the other hand, come from noncaloric food factors, namely, vitamins, minerals, fibers, and phytochemicals, literally chemical compounds that occur naturally in plants. These noncaloric nutrients are vitally important to your health. When the ratio of nutrients to calories is high, fat melts away, and health is restored. The more nutrient-dense food you consume, the more you’ll be satisfied with fewer calories, and the less you’ll crave fat and high-calorie foods.

A high-nutrient diet slows down the aging process, helps repair cells, reduces inflammation, and helps rid the body of toxins. High-nutrient, low-calorie foods contain a great deal of fiber and take up a lot of room in the stomach. As you consume a larger quantity of food, it satiates your hunger and blunts your appetite. Meeting the body’s micronutrient needs also helps suppress food cravings and what I call “toxic hunger,” which drives you to consume more calories than you require—usually in the form of processed foods, which can lead to cancer and heart disease, among many other ailments.

Witnessing how
Eat to Live
inspired so many people to change their diets not only reinforced my findings that high-nutrient diets produce good health, it offered a substantial, ongoing body of evidence proving that this approach works. Nothing shows the power of this way of eating more than hearing from people who apply this knowledge and live it every day in their own lives. Thousands of people lost dramatic amounts of weight without difficulty and never regained it. One reader named Scott weighed a staggering 500 pounds. Scott couldn’t tie his own shoes. His breathing was labored, and he could walk only nine steps at a time. He was thirty-eight years old. A doctor told him that if he didn’t undergo stomach reduction surgery, he would most likely die within six months. Scott spurned
his doctor’s advice and instead decided to change how he thought about food and his approach to eating by following my high-nutrient meal plan, which provided him with all the nutrients, protein, and vitamins he needed to achieve good health. Because he now eats for health, he can eat as much as he wants, fully ignoring the scale. Today, Scott weighs 180 pounds and loves to exercise—a big change from when he could hardly walk.

My patients routinely lose up to 20 pounds during the first six weeks of changing their eating habits. And that’s just the beginning. More importantly, they typically recover from diseases such as allergies, asthma, acne, headaches, high blood pressure, diabetes, reflux esophagitis, lupus, kidney insufficiency, psoriasis, angina, cardiomyopathy, and multiple sclerosis—and they gradually get to eliminate their dependence on prescription drugs.

Though I have long studied and utilized high-nutrient eating as a medical prescription for the past twenty-five years, even I have to admit to being surprised by some of the phenomenal recoveries people have reported to me. Once, someone asked whether this micronutrient-rich approach could turn their hair back to brown from gray. “Of course not,” I answered. But, sure enough, on my website forum two people commented that it had happened to them. I couldn’t believe it. Similarly, one of my patients had hepatitis C before starting my eating style. I didn’t think this high-nutrient eating style would cure his hepatitis infection and liver injury; however, after some time, his hepatitis C disappeared. I had to repeat the blood tests three times to believe it. Seeing such dramatic recoveries from what are conventionally considered irreversible diseases excited me, making me more adamant that this delicious way of eating can lead to medical transformations for millions of Americans.

The results and success stories are astounding. They come from people of different backgrounds, from different ages, and they all
started their journeys for different reasons. Yet what they share in common is they are all now in excellent health.

For all of
Eat to Live
’s success, however, I quickly came to realize that science-based information about nutrition alone wasn’t enough. With this information available to such a broad audience, why would so many people fail to recognize their need to protect their precious health and lose weight? Why would they be unable and unwilling to change? Why would they want to remain unhealthy? Why would they want to reject unassailable, scientific, and dramatically effective advice? I’ll tell you why. Because of the overwhelming twin powers of food preference and food addiction.

Like the classic victim, we actually grow to love the things that kill us—in this case, unhealthy food. Unhealthy eating styles and food addictions have both taken control of our brains, and this addiction to certain foods is often as deadly as many other addictions.

On Black Sisters Street by Chika Unigwe
La gran manzana by Leandro Zanoni
The Notes by Ronald Reagan
The Battle by Barbero, Alessandro
Lover Enraptured: Thieves of Aurion, Book 2 by Jodi Redford
His Best Mistake by Kristi Gold
Earls Just Want to Have Fun by Shana Galen
Footsteps in Time by Sarah Woodbury
The Dig by Cynan Jones
3.096 días by Natascha Kampusch