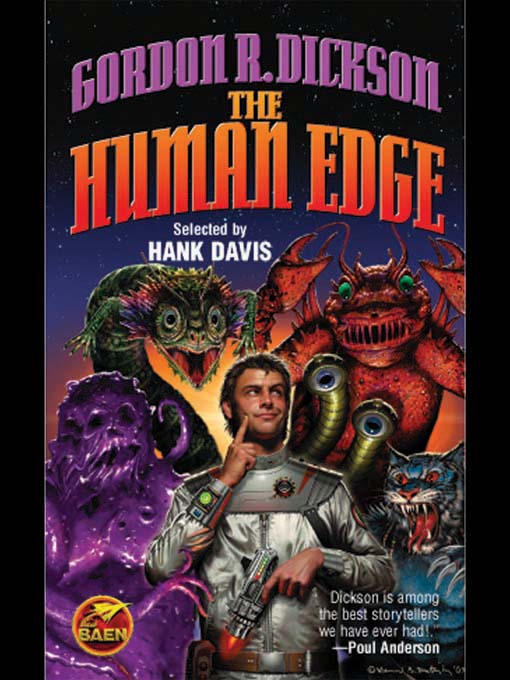 Dedicating a collection of another person's work might seem presumptuous, particularly when that person is no longer around to give an opinion. However, Gordon R. Dickson was a strong supporter of space exploration, and I recall when, at a Nebula Awards ceremony in the early 1970s, he stood up to announce the formation of a loose organization of sf writers called, informally, Friends of the Space Program. I think he would approve of this dedication.

Pioneers on the Star Road

(And it's not "Do I feel lucky?" If you're looking at this page, you have a hefty hunk of first-rate science fiction by Gordon R. Dickson in hand, so you
are
lucky, regardless of what you may feel. I wouldn't recommend buying a lottery ticket, however—lucking into a Dickson book may have used up your quota of good fortune for the day. . . .)

You're thinking, these are twelve stories by the same author, all on the same subject, so there's liable to be a certain similarity from one story to the next. . . .

Actually you are right about there being a similarity from one story to the next, except that the similarity is that all the stories are well-crafted, ingeniously plotted, show a wide range of tone (sometimes amusing, sometimes grim, sometimes a bit of both), and never fail to entertain.

Or, to put it more succinctly, the certain similarity is that these stories are all by the same grand master: Gordon R. Dickson.

Why should anyone want to listen to Bach's Goldberg Variations, after all? I mean, two sides of an LP—if you remember LPs—or an entire CD taken up by thirty (or thirty-one, if you count the reprise of the aria) variations on one tune, and played on one instrument, either harpsichord or piano . . . how much variety can there be in that, right?

I'm not going to claim that Gordon R. Dickson was in Bach's league (but then, who in at least the last 100 years has been?), but as with Bach, you are dealing with a high order of talent and craftsmanship. And Dickson can ring ingenious and fresh changes on one theme.

The theme: when human meets alien, even a more technologically advanced alien, said alien had better not get too cocky. Humans can be very tricky when they need to be, giving them an edge—the human edge.

James Blish, reviewing a Dickson novel several years ago, commented that while many critics lumped Dickson and another sf master, Poul Anderson, together, there was a notable difference. Anderson's characters might prevail, or they might fail in spite of their valiant struggle, in stories "written from a floor of brave gloom" (as I recall Blish putting it), but Dickson's characters struggled
and
prevailed. Dickson's universe was neither impersonal nor hostile, and the human spirit would win, Blish wrote approvingly.

I recall several Dickson stories (but no novels) with downer endings, so he definitely wasn't writing from the Pollyanna side of the Force. (I also recall quite a few Blish stories that I consider gloomy, so he wasn't, either.) But on the whole, in Dickson's universe, man not only endures, but prevails, to crib a line from Faulkner. (Was
he
in Bach's league? You decide.)

Algis Budrys once stated that a sure-fire recipe for being thought profound was frequently to reiterate that the universe is very big, and insignificant humans are very, very small. After noting that though the instruments do show that the universe
is
very big, that doesn't necessarily say anything about humans. "They are our instruments, after all," he added, "and we somehow managed to build them." He was writing about a writer whom he praised for having "wider horizons" than other writers who were stuck in the big universe/puny humans mode. And while the writer wasn't Gordon R. Dickson, the same description fits his work very well.

So here Dickson is, spinning virtuoso variations on a theme, in stories written years apart, appearing in many different publications, sometimes with humor, sometimes with grim seriousness, and always with wide horizons; not to mention a towering talent for entertaining.

And you definitely
will
be entertained.

I
told
you that you should feel lucky, didn't I?

My appreciative thanks to Jim Baen, who had the idea for a Dickson collection on this theme, gave it its title, and suggested the story "Danger: Human" as the opening shot.

For a curtain raiser, this one takes the viewpoint of the extraterrestrials, a sympathetic bunch of regular guys, who capture a strange monster called a "human" and make the mistake of experimenting on him. There may be things that extraterrestrials Were Not Meant to Know. . . .

The spaceboat came down in the silence of perfect working order—down through the cool, dark night of a New Hampshire late spring. There was hardly any moon and the path emerging from the clump of conifers and snaking its way across the dim pasture looked like a long strip of pale cloth, carelessly dropped and forgotten there.

The two aliens checked the boat and stopped it, hovering, some fifty feet above the pasture, and all but invisible against the low-lying clouds. Then they set themselves to wait, their woolly, bearlike forms settled on haunches, their uniform belts glinting a little in the shielded light from the instrument panel, talking now and then in desultory murmurs.

"It's not a bad place," said the one of junior rank, looking down at the earth below.

"Why should it be?" answered the senior.

The junior did not answer. He shifted on his haunches.

"How many?" asked the senior.

"Three—the doctor thinks. That's not bad for a first birthing."

They fell silent for a few seconds. The spaceboat rocked almost imperceptibly in the waters of night.

The senior glanced overside. Down below, a tall, dark form had emerged from the trees and was coming put along the path. A little beam of light shone before him, terminating in a blob of illumination that danced along the path ahead, lighting his way. The senior stiffened.

"Take controls," he said. The casualness had gone out of his voice. It had become crisp, impersonal.

"Controls," answered the other, in the same emotionless voice.

The spaceboat dropped groundward. There was an odd sort of soundless, lightless explosion—it was as if concussive wave had passed, robbed of all effects but one. The figure dropped, the light rolling from its grasp and losing its glow in a tangle of short grass. The spaceboat landed and the two aliens got out.

In the dark night they loomed furrily above the still figure. It was that of a lean, dark man in his early thirties, dressed in clean, much-washed corduroy pants and checkered wool lumberjack shirt. He was unconscious, but breathing slowly, deeply and easily.

The junior backed away, up through the spaceboat's open lock, grunting a little with the awkwardness of his burden.

Eldridge Timothy Parker drifted in that dreamy limbo between awakeness and full sleep. He found himself contemplating his own name.

There was a hardness under his back, the back on which he was lying—and a coolness. His flaccid right hand turned flat, feeling. It felt like steel beneath him. Metal? He tried to sit up and bumped his forehead against a ceiling a few inches overhead. He blinked his eyes in the darkness—

He flung out his hands, searching, feeling terror leap up inside him. His knuckles bruised against walls to right and left. Frantic, his groping fingers felt out, around and about him. He was walled in, he was surrounded, he was enclosed.

Much later, when he awoke again, he was in a strange place that seemed to have no walls, but many instruments. He floated in the center of mechanisms that passed and re-passed about him, touching, probing, turning. He felt touches of heat and cold. Strange hums and notes of various pitches came and went. He felt voices questioning him.

. . .
well, i suppose i was pretty much like any of the kids around our town . . . i was a pretty good shot and i won the fifth grade seventy-five yard dash . . . i played hockey, too . . . pretty cold weather up around our parts, you know, the air used to smell strange it was so cold winter mornings in January when you first stepped out of doors . . . it is good, open country, new england, and there were lots of smells . . . there were pine smells and grass smells and i remember especially the kitchen smells . . . and then, too, there was the way the oak benches in church used to smell on Sunday when you knelt with your nose right next to the back of the pew ahead. . . .

. . . the fishing up our parts is good too . . . i liked to fish but i never wasted time on weekdays . . . we were presbyterians, you know, and my father had the farm, but he also had money invested in land around the country . . . we have never been badly off but i would have liked a motor-scooter. . . .

. . . no i did not never hate the germans, at least i did not think i ever did, of course though i was over in europe i never really had it bad, combat, i mean . . . i was in a motor pool with the raw smell of gasoline, i like to work with my hands, and it was not like being in the infantry. . . .

. . . i have as good right to speak up to the town council as any man . . . i do not believe in pushing but if they push me i am going to push right back . . . nor it isn't any man's business what i voted last election no more than my bank balance . . . but i have got as good as right to a say in town doings as if i was the biggest landholder among them. . . .