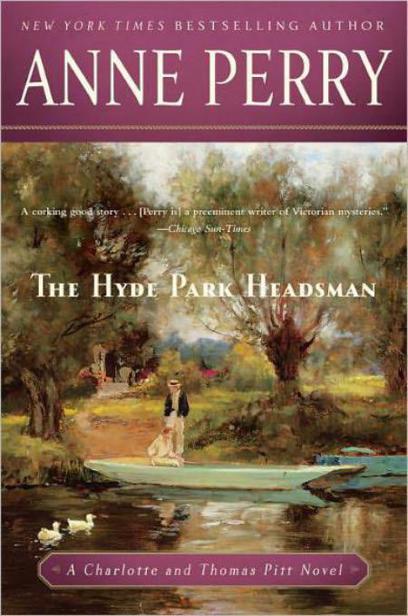 “Jolly good …
The Hyde Park Headsman
is full of suspense, intrigue, politics and psychological insights. It’s also rich with fully developed characters and relationships. Perry combines those elements with a vivid rendering of Victorian manners and morals for men and women of various social classes.”

“Anne Perry’s genius is apparent in depicting the manners and mores of Victorian London…. Perry brings it to vibrant life with absorbing reality that forces us to ponder just how much progress we’ve made in the past century.”

“Splendidly plotted … [THE HYDE PARK HEADSMAN] explores the nature of power while adding detail and color to Perry’s ever more elaborate tapestry of late-nineteenth-century London life.”

By Anne Perry
Published by The Random House Publishing Group:

DEATH IN THE DEVIL’S ACRE

THE FACE OF A STRANGER

THE SINS OF THE WOLF

WEIGHED IN THE BALANCE

A BREACH OF PROMISE

DEATH OF A STRANGER

The World War I Novels:

NO GRAVES AS YET

ANGELS IN THE GLOOM

AT SOME DISPUTED BARRICADE

WE SHALL NOT SLEEP

Published in the United States by Ballantine Books, an imprint of The Random House Publishing Group, a division of Random House, Inc., New York, and simultaneously in Canada by Random House of Canada Limited, Toronto.

B
ALLANTINE
and colophon are registered trademarks of Random House, Inc.

To Leona Nevler, with thanks.

“O
H
G
EORGE
.” Millicent let out her breath in a sigh of happiness. “Isn’t it beautiful? I’ve never been out in the park at this time of the morning before. The dawn is so romantic, don’t you think? It’s the beginning of everything!”

George said nothing, but tiptoed a little more rapidly over the wet grass.

“Look at the light on the water.” Millicent went on ecstatically. “It’s just like a great silver plate.”

“Funny shape for a plate,” George muttered, regarding the long, narrow snake of the Serpentine with less enthusiasm than she.

“It will be like fairyland out there.” Millicent had no respect for the practical at a time like this. She had crept out through the park to sail on the dawn-lit water alone with George. What place had the literal at such a point? She picked up her skirts to keep them from getting soaked in the dew; this much was merely common sense, which was a totally different thing. No one wanted the wet, heavy fabric flapping around their ankles.

“There’s someone already out,” George said with disgust. And in the broadening light it was quite plain that there was indeed one of the small boats about three yards from the shore, but the figure in it was curiously bent over, as if looking for something in the bottom of the boat by his feet.

Millicent could hardly contain her disappointment. Where was the romance if someone else was present, someone not part of the idyll? One could pretend Hyde Park, in the middle of London, were a wood in some European archdukedom and
George a prince, or at least a knight, but some other mundane-minded oarsman would definitely spoil it; apart from the fact that she should not be here, unchaperoned, and a witness was not welcome.

“He’s not moving,” George replied with annoyance. He raised his voice. “Excuse me, sir. Are you quite well?” He frowned. “I can’t see the fellow’s face at all,” he added to Millicent. “Wait here. I shall see if he will be a gentleman and move a little away.” And he strode down towards the bank regardless of getting his shoes soaked, hesitated on the verge, then stumbled to his knees and slid with a violent splash into the water.

“Oh!” Millicent was horrified, painfully embarrassed for him, and having difficulty stifling her intense desire to giggle. “Oh, George!” She ran down the grass to where he was thrashing around in the shallows making a fearful noise and stirring up mud without seeming to regain his feet. Extraordinarily, the man in the boat took no notice whatsoever.

Then in the fast strengthening light, Millicent saw why. She had assumed he was bent forward, as had George. It was not so. His head was absent. There was nothing above his shoulders but the blood-soaked stump of his neck.

Millicent crumpled into total oblivion and fell headlong onto the grass.

“Yes sir,” the constable said smartly. “Captain the Honorable Oakley Winthrop, R.N. Found ’eadless in one o’ them little rowboats on the Serpentine. This mornin’ about dawn. Two young lovers off for a romantic trip.” He invested the word
romantic
with infinite scorn. “Poor souls fainted clean away—got no stomach for the likes o’ that.”

“Not unnatural,” Superintendent Thomas Pitt said reasonably. “I should find it a very worrying thought if they had.”

The constable quite obviously did not understand him.

“Yes sir,” he said with bland obedience. “The local bobby were called, when the gentleman pulled ’isself together and got out o’ the water. I gather as ’e fell in wi’ the shock o’ the event, like.” His lips twitched very slightly but his voice was carefully ironed of even the suspicion of humor. “Constable Withers, that was ’im what was called, ’is bein’ on duty in the park, like. ’E took one look at the corpse an’ knew as ’e’d got a real nasty one, so ’e sent for ’is sergeant, an’ they looked a
bit closer, like.” He drew in his breath, waiting for Pitt to say something.

“That’s when they found ’oo the dead man were,” the constable continued. “ ’Im being an important naval man, and an ‘Honorable,’ like, they thought as it should be someone o’ your rank to ’andle it—sir.” He looked at Pitt with satisfaction.

Pitt was newly promoted to superintendent. He had fought it long because he knew his real skill, which was very considerable, lay in working with people, both with the denizens of the semiunderworld, the poor or the truly criminal, and with the inhabitants of the servants’ quarters, the front parlors, and the withdrawing rooms of the gentry.

Then in the late autumn of last year, 1889, his superior, Micah Drummond, had retired from office in order to marry the woman he had loved ever since the appalling scandal that had ruined her husband and finally taken his life. He had recommended Pitt to fill his place on the grounds that although Pitt was not a gentleman, as Drummond most certainly was, he had the experience of actual police work, at which he was undoubtedly gifted, and had proved himself able to solve even the most delicate cases involving the politically or socially powerful.

And after the fiasco of the Whitechapel murders, still unsolved and perhaps destined to remain so, and the fierce unpopularity of the police, the public lack of faith in them, it was time for a bold change.

So now in the spring of 1890, the dawn of a new decade, Pitt was in charge of the Bow Street station, with special responsibility for sensitive cases which threatened to become explosive if not handled with both tact and extreme dispatch. Hence P. C. Grover was standing in front of him in the beautiful office which he had inherited from Micah Drummond, telling him of the decapitation of Captain the Honorable Oakley Winthrop, knowing that Pitt would be obliged to handle the case.

“What else do you know about it?” Pitt asked, looking up at Grover and leaning back in his chair, although at times like this he still felt it to be Drummond’s chair.

“What did the medical officer say?” Pitt prompted.