Read The Invisible Handcuffs of Capitalism: How Market Tyranny Stifles the Economy by Stunting Workers Online

The Invisible Handcuffs of Capitalism: How Market Tyranny Stifles the Economy by Stunting Workers 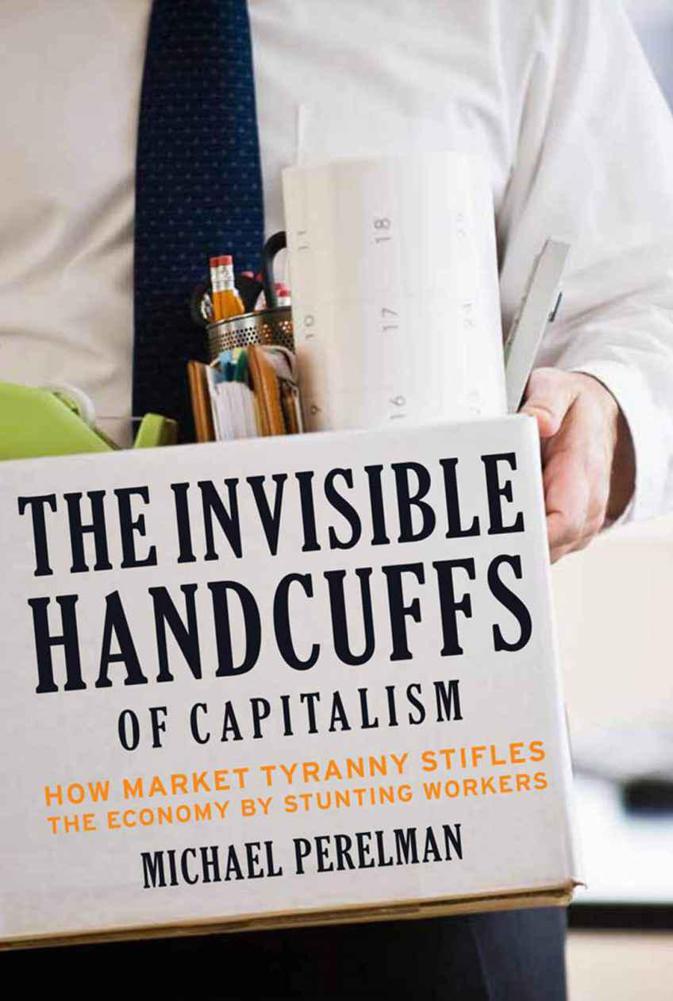 The Invisible Handcuffs of Capitalism

THE INVISIBLE HANDCUFFS OF CAPITALISM

How Market Tyranny Stifles the Economy by Stunting Workers

The invisible handcuffs : how market tyranny stifles the economy by stunting workers / by Michael Perelman.

1. The Anti-Worker Theology of Markets

2. Disciplining Workers in the Procrustean Bed

4. Everyday Life in a Procrustean World

7. The Dark Side of Adam Smith

9. The Destructive Nature of Procrusteanism

All books are collective, but I am fortunate in working with a wonderful collective, beginning with Blanche Perelman, whose tolerance and support has let me obsess about the causes and consequences of economics’ neglect of work, workers, and working conditions. Next comes Michael Yates, who was far more than an editor, relentlessly prodding me to think harder and more clearly. He deserves a fair share of any credit due to this book. Edward Roualdes gave up a vacation in Hawaii to work with me on the manuscript, catching me when I was insufficiently clear. David Ward also gave detailed editorial suggestions, as did my colleagues Richard Ponarul and Samir Nissan offered valuable suggestions. My first editor, Margo Crouppen, helped me during the early stages.

The Invisible Handcuffs
tells a unique story about the damage that capitalism inflicts on society. Many authors have addressed the cultural, social, ecological, or ethical shortcomings of markets, such as the unequal distribution of income. Others have stressed the inherent instability of capitalism, which leads to recurrent economic crises.

This book does something different. It takes aim at capitalism in terms of its own basic rationale—the creation of an efficient method of organizing production. In particular,
The Invisible Handcuffs
concentrates on a largely ignored dimension of market inefficiency: how the failure by economists and employers alike to adequately take work, workers, and working conditions into account has led to actions that have stifled the economy.

The inattention of mainstream economists to work, workers, and working conditions has not been accidental. It has been a key part of a centuries-long effort, beginning at least as far back as Adam Smith, to construct an ideology that would shield markets from criticism.

Some mainstream economists have dared to look in this direction, but they have been treated harshly. So most economists have practiced self-censorship and shied away from examining work, workers, and
working conditions. There have been sharp disagreements about minor points, but these have only helped to obscure the virtual unanimity about larger issues.

There have been times, especially during economic crises, when the usually closed ranks of economists have opened a bit. During the recent “Great Recession” for example, many people saw or at least suspected that the fanciful economic theories had helped to bring about the economic crisis. However, we shall see how similar “awakenings” have accompanied past crises, but once these passed, the old ideology, again masquerading as science and as always buttressed by imposing mathematical models, reasserted itself. Ironically, this return to orthodoxy made the economy even more vulnerable to crisis.

The approach of this book is historical, because this is especially useful in understanding the continuing hold of mainstream economic theory. As William Faulkner wrote in
Requiem for a Nun
, “The past is never dead. It’s not even past.”

Almost 250 years ago, Adam Smith, often described as the father of modern economics, introduced the idea of the invisible hand, which has since become a popular metaphor for expressing unbounded faith in capitalism. He proposed that the market coordinated people’s activities in such a beneficent way that one might well imagine that an invisible hand was at work creating an economy that was both fair and efficient.

Smith’s argument has a certain power and persuasiveness, and, because he was skilled in rhetoric, a subject he taught at his university, he was able to convincingly present the economy as a voluntary system, carefully excluding dramatic economic changes that were already
under way, literally in his own neighborhood. But as we will see, Smith’s idea of an invisible hand guiding the economy toward a desirable social outcome took hold because it fit the needs of those powerful persons who owned the land, raw materials, and capital upon which everyone else depends.

Building upon Smith, later economists created a more sophisticated theory, while still maintaining the basic ingredients of Smithian economics, especially his emphasis on individual commercial transactions (buying and selling) as the central feature of capitalist economies. Production itself, which is always a social and not an individual process, was excluded.

The dogmatic insistence on framing the economy this way obscures any consideration of fundamental questions about work, workers, and working conditions. For example, economists may look at workers in terms of the level of wages or the extent of unemployment (the absence of a buyer-seller transaction in the job market), but the actual content of people’s existence as workers on the job passes unnoticed. Even where economists take note of workers’ skills, they reduce it to the level of a commodity—identifying skill as “human capital, “to be sold to a willing buyer.

Within this narrow market perspective, social relations become invisible. Workers are not just creatures that inhabit the workplace. They live within families, a class, and a society. If these relationships are ignored, the potential for substantial progress in grasping the economy is virtually nil.

Although the ideological victory of mainstream economics has been effective in staving off critiques, it has been a mixed blessing for employers and their allies in government. While economics has helped shield them from criticism as well, it also has mesmerized them into believing things that are not true. They, too, have neglected work, workers, and working conditions, and this has made for bad management
and bad policy. People in power became lulled into ignoring the importance of the productive activities that form the foundation of a strong economy.

The subject of conflicts between ideological and productive needs runs through this book. The ideology of economics intersected with the personal needs of the people who run the economy. These “captains of industry” enjoyed believing that their authority was the result of their own talents and hard work. Measures that could make workers more productive might threaten to undermine either the rationale for or the authority of the capitalists. So when they had to choose between justifying their position and improving workers’ productive potential, they opted for the former.

Instead of Adam Smith’s imagined harmonious economy, the real world is one in which the interests of employers and workers are sharply at odds. Ideology may be able to partially cover up the nature of this conflict, but ideology cannot eradicate it. Instead, hidden from view, the conflict festers, poisoning all aspects of society. This corrosive aspect of capitalist social relations compels business and public agencies to take strong measures to impose their will on recalcitrant workers; however, the effort to control labor increases hostility within the workplace. At the same time, such measures create an atmosphere that destroys respect, as well as the free flow of information, both of which are essential in an efficient modern economy. They also force the system’s apologists to construct still more elaborate rationalizations for its goodness.

In contrast, a rational economy would offer workers a helping hand, not just in terms of providing a higher standard of living, but even more important, making sure that workers have every opportunity to develop their potential.

This neglect of workers’ potential, both at the workplace and in society at large, represents an enormous loss—both social and economic. One problem in moving forward is the opposite of Adam Smith’s invisible hand. What we might call “invisible handcuffs” blind workers from realizing how capitalism both constrains their potential and degrades their quality of life.

The more technologically advanced an economy becomes, the more destructive the invisible handcuffs become. Both the economy and society suffer because of the tragic neglect of work, workers, and working conditions. Modest political reforms and a more humanistic scheme of management might seem to be able to remedy this problem, but such efforts will, at best, make modest improvements. These invisible handcuffs will continue to undermine society by stunting workers and thereby stifling the economy. Nonetheless, these handcuffs are an integral part of a market economy.

For the most part, this book concentrates on the United States, where the market economy has perhaps evolved the furthest. Certainly, the current U.S. economy falls short on an infuriating array of counts. Here is the most powerful economy in the world, yet it seems powerless to meet the most pressing needs of its people. The list of pervasive problems includes obscene poverty, inadequate health care, climate change, and environmental damage.

Policymakers do not pay sufficient attention to such problems. When they do address them, they end up going to great lengths to nurture the market rather than people; yet to their surprise, the relative economic strength of the U.S. economy still seems to be eroding. In this context, the importance of looking at the economy from the perspective of workers should be undeniable. Today, when the world faces such difficult threats, society cannot afford to waste a resource as valuable as human potential. This book is intended to highlight the urgent need to cast off the handcuffs in order to benefit from previously unutilized human potential.

Mainstream economics represents a barrier to meeting the urgent challenges that we face. Breaking through the solid front of the discipline is a difficult but urgent task.

Economists have been trained to resist such efforts. Their education promotes a maddening uniformity. Heated debates do occur, but
almost always within a narrow framework. A few marginalized schools of economics exist at the fringes of academia, but they exert little influence on the discipline as a whole. For example, for decades no Ivy League economics department has hired anybody who deviates significantly, much less radically, from mainstream thought.