And he plunged his chin in the Pacific, to cool it.

“Very well,” said the Iron Man. “From now on you are the slave of the earth. What can you do?”

“Alas,” said the space-bat-angel-dragon, “I am useless. Utterly useless. All we do in space is fly, or make music.”

“Make music?” asked the Iron Man. “How? What sort of music?”

“Then whatever made you want to eat up the earth?” asked the Iron Man. “If you're all so peaceful up there, how did you get such greedy and cruel ideas?”

The dragon was silent for a long time after this question. And at last he said: “It just came over me. I don't know why. It just came over me, listening to the battling shouts and the war-cries of the earth â I got excited, I wanted to join in.”

“Well, you can sing for us instead,” said the Iron Man. “It's a long time since anybody here on earth heard the music of the spheres. It might do us all good.”

And so it was fixed. The space-bat-angel-dragon was to send his star back into the constellation of Orion, and he was to live inside the moon. And every night he was to fly around the earth, through the heavens, singing.

So his fearful shape, slowly swimming through the night sky, didn't frighten people, because it was dark and he couldn't be seen. But the whole world could hear him, a strange soft music that seemed to fill the whole of space, a deep weird singing, like millions of voices singing together.

Meanwhile the Iron Man was the world's hero. He went back to his scrap-yard. But now everybody in the world sent him a present. Some only sent him a nail. Some sent him an old car. One rich man even sent him an ocean liner. He sprawled there in his
yard, chewing away, with his one ear slightly drooped where the white heat of that last roasting had slightly melted it. As he chewed, he hummed in harmony to the singing of his tremendous slave in heaven.

And the space-bat-angel's singing had the most unexpected effect. Suddenly the world became
wonderfully
peaceful. The singing got inside everybody and made them as peaceful as starry space, and
blissfully
above all their earlier little squabbles. The strange soft eerie space-music began to alter all the people of the world. They stopped making weapons. The countries began to think how they could live pleasantly alongside each other, rather than how to get rid of each other. All they wanted to do was to have peace to enjoy this strange, wild, blissful music from the giant singer in space. 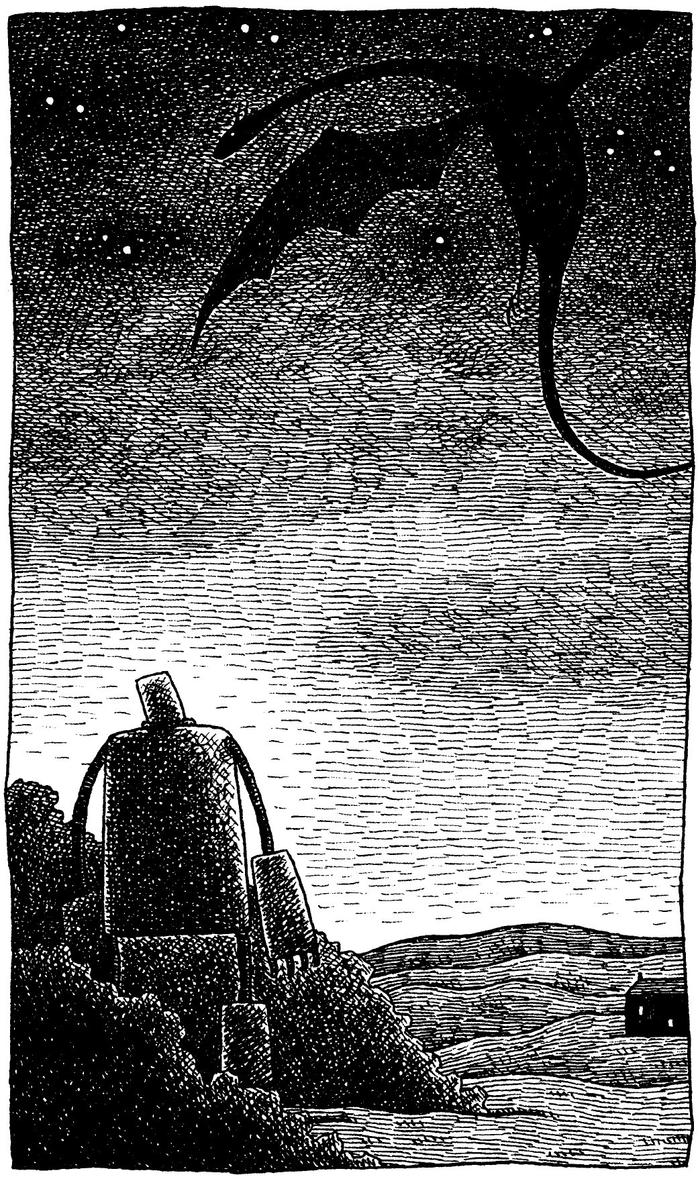 How The Whale Became

The Earth-owl and Other Moon People

The Coming of the Kings

Under the North Star

What is the Truth?

Ffangs the Vampire Bat and the Kiss of Truth

Tales of the Early World

The Dreamfighter and Other Creation Tales

The Cat and the Cuckoo

The Hawk in the Rain

Elmet (with photographs by Fay Godwin)

Ted Hughes was born in Yorkshire in 1930. His first book,
The Hawk in the Rain
, was published by Faber in 1957, and was followed by many volumes of poetry and prose for both children and adults. He was Poet Laureate from 1984 and was appointed to the Order of Merit in 1998, the year in which he died.

The right of Ted Hughes to be identified as author of this work has been asserted in accordance with Section 77 of the Copyright, Designs and Patents Act 1988

This ebook is copyright material and must not be copied, reproduced, transferred, distributed, leased, licensed or publicly performed or used in any way except as specifically permitted in writing by the publishers, as allowed under the terms and conditions under which it was purchased or as strictly permitted by applicable copyright law. Any unauthorised distribution or use of this text may be a direct infringement of the author’s and publisher’s rights, and those responsible may be liable in law accordingly