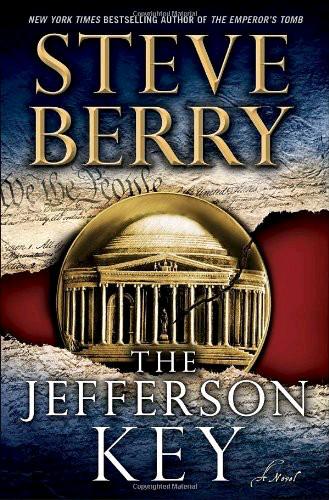 For Zachary and Alex,

To my agent and friend, Pam Ahearn—I offer another bow of deep appreciation.

To Mark Tavani, for pushing to the limit.

And to Simon Lipskar, thanks for your wisdom and guidance.

A few special mentions: a bow to the great novelist and friend, Katherine Neville, for opening doors at Monticello; the wonderful folks at Monticello who were most helpful; the great professionals at the Library of Virginia, who assisted with the Andrew Jackson research; Meryl Moss and her terrific publicity staff; Esther Garver and Jessica Johns, who continue to keep Steve Berry Enterprises working; Simon Gardner, from the Grand Hyatt, for providing fascinating insights on both the hotel and New York; Dr. Joe Murad, our chauffeur and tour guide in Bath; Kim Hovey, who offered some excellent on-site observations and photographs of Mahone Bay; and, as always, little would be accomplished without Elizabeth—wife, mother, friend, editor, and critic. Quite the real deal.

This book is for our grandsons, Zachary and Alex.

To them, I’m Papa Steve.

For me, they’re both quite special.

The Congress shall have Power to ... grant Letters of Marque and Reprisal, and make Rules concerning Captures on Land and Water ...

—
CONSTITUTION
OF
THE
UNITED
STATES
,

Privateers are the nursery for pirates
.

PRESIDENT
ANDREW
JACKSON
FACED
THE
GUN
AIMED
AT
HIS
chest. A strange sight but not altogether unfamiliar, not for a man who’d spent nearly his entire life fighting wars. He was leaving the Capitol Rotunda, walking toward the East Portico, his somber mood matching the day’s weather. His Treasury secretary, Levi Woodbury, steadied him, as did his trusted walking cane. Winter had been harsh this year, especially on a gaunt, sixty-seven-year-old body—his muscles were unusually stiff, his lungs perpetually congested.

He’d ventured from the White House only to say goodbye to a former friend—Warren Davis of South Carolina, elected twice to Congress, once as an ally, a Jacksonian Democrat, the other as a Nullifier. His enemy, the former vice president John C. Calhoun, had concocted the Nullifier Party, its members actually believing that states could choose what federal laws they wanted to obey.
The devil’s work
was how he’d described such foolishness. There’d be no country if the Nullifiers had their way—which, he supposed, was their entire intent. Thankfully, the Constitution spoke of a unified government, not a loose league where everyone could do as they pleased.

People, not states, were paramount.

He hadn’t planned to attend the funeral, but thought better yesterday. No matter their political disagreements he’d liked Warren Davis, so he’d tolerated the chaplain’s depressing sermon—
life is uncertain, particularly for the aged
—then filed past the open casket, muttered a prayer, and descended to the Rotunda.

The throng of onlookers was impressive.

Hundreds had come to glimpse him. He’d missed the attention. When in a crowd he felt as a father surrounded by his children, happy in their affection, loving them as a dutiful parent. And there was much to be proud of. He’d just completed the impossible—paying off the national debt, satisfied in full during the 58th year of the republic—in the 6th year of his presidency, and several in the crowd hollered their approval. Upstairs, one of his cabinet secretaries had told him that the spectators had braved the cold mainly to see Old Hickory.

He’d smiled at the reference to his toughness, but was suspicious of the compliment.

He knew many were worried that he might break with precedent and seek a third term, among them members of his own party, some of whom harbored presidential ambitions of their own. Enemies seemed everywhere, especially here, in the Capitol, where southern representatives were becoming increasingly bold and northern legislators arrogant.

Keeping some semblance of order had become difficult, even for his strong hand.

And worse, of late he’d found himself losing interest in politics.

All the major battles seemed behind him.

Only two more years were left in office and then his career would be over. That was why he’d been coy about the possibility of a third term. If nothing else, the prospect of him running again kept his enemies at bay.

In fact, he harbored no intentions of another term. He would retire to Nashville. Home to Tennessee and his beloved Hermitage.

But first there was the matter of the gun.

The well-dressed stranger pointing the single-shot brass pistol had emerged from the onlookers, his face covered in a thick black beard. As a general Jackson had defeated British, Spanish, and Indian armies. As a duelist he’d once killed in the name of honor. He was afraid of no man. Certainly not this fool, whose pale lips quivered, like the hand aiming the gun.

The young man pressed the trigger.

A bang echoed off the Rotunda’s stone walls. But no spark ignited the powder in the barrel.

Jackson knew what had happened. Cold, damp air. He’d fought many a battle in the rain and knew the importance of keeping powder dry.

Anger rushed through him.

He gripped his walking cane with both hands, like a spear, and charged his attacker.

The young man tossed the gun away.

A second brass pistol appeared, its barrel now only inches from Jackson’s chest.

The gunman pressed the trigger.

Another retort from the percussion cap, but no spark.

Before his cane could jab the assailant’s gut, Woodbury grabbed his arm, his secretary of the navy the other. A man in uniform leaped on the gunman, as did several members of Congress, one of them Davy Crockett from Tennessee.

But the two men did not relinquish their grip.

The assassin’s hands flailed above a sea of heads, then the man was toppled to the floor.

“Let me go,” Jackson said again. “I can protect myself.”

Police appeared and the man was jerked to his feet. Crockett handed him over to the officers and proclaimed, “I wanted to see the damnedest villain in this world and now I have.”

The gunman babbled something about being the king of England and having more money once Jackson was dead.

“We must leave,” Woodbury whispered to him. “That man is obviously insane.”

He did not want to hear that excuse. “No insanity. There was a plot and that man was a tool.”

“Come, sir,” his secretary of the Treasury said, leading him out into the misty morning and a waiting carriage.

But his mind churned.

He agreed with what Richard Wilde, a congressman from Georgia, had once told him.
Rumor, with her hundred tongues, gives at least as many tales
. He hoped so. He’d faced that assassin without a hint of fear. Even two guns had not deterred him. Everyone present would attest to his courage.

And, thanks to God almighty, providence had guarded him.

He truly did seem destined to raise the country’s glory and maintain the cause of the people.

He stepped into the carriage. Woodbury followed him inside, and the horses advanced through the rain. He no longer felt cold, or old, or tired. Strength surged through him. Like last time. Two years ago. During a steamboat excursion to Fredericksburg. A disturbed former naval officer, whom he’d fired, had bloodied his face registering the first physical assault on an American president. After, he’d declined to press charges and vetoed his aides’ advice that a military guard surround him at all times. The press already labeled him a king, his White House a court. He would not provide further grist for that mill.

Now someone had actually tried to kill him.

Another first for an American president.

More an act, he thought, that belonged to Europe and ancient Rome. Usually employed against despots, monarchs, and aristocrats, not popularly elected leaders.

He glared at Woodbury. “I know who ordered this. They have not the courage to face me. Instead, they send a crazy man to do their bidding.”

“Who are you referring to?”

“Traitors” was all he offered.

And there’d be hell to pay.

ONE
MISTAKE
WAS
NOT
ENOUGH
FOR
COTTON
MALONE
.

Error number one was being on the fifteenth floor of the Grand Hyatt hotel. The request had come from his old boss Stephanie Nelle, through an email sent two days ago. She needed to see him, in New York, on Saturday. Apparently, the subject matter was something they could discuss only in person. And apparently, it was important. He’d tried to call anyway, phoning Magellan Billet headquarters in Atlanta, but was told by her assistant, “She’s been out of the office for six days now on
DNC
.”

He knew better than to ask where.

That meant don’t call me, I’ll call you.

He’d been there before himself—the agent in the field, deciding when best to report in. That status, though, was a bit unusual for the head of the Magellan Billet. Stephanie was responsible for all twelve of the department’s covert operatives. Her task was to supervise. For her to be
DNC
meant that something extraordinary had attracted her attention.

He and Cassiopeia Vitt had decided to make a New York weekend of the trip, with dinner and a show after he discovered what Stephanie wanted. They’d flown from Copenhagen yesterday and checked into the St. Regis, a few blocks north of where he now stood. Cassiopeia chose the accommodations and, since she was also paying for them, he hadn’t protested. Plus, it was hard to argue with regal ambience, breathtaking views, and a suite larger than his apartment in Denmark.

He’d replied to Stephanie’s email and told her where he was staying. After breakfast this morning, a key card for the Grand Hyatt had been waiting at the St. Regis’ front desk along with a room number and a note.

PLEASE
MEET
ME AT
EXACTLY
6:15
THIS
EVENING

He’d wondered about the word
exactly
, but realized his former boss suffered from an incurable case of obsessive behavior, which made her both a good administrator and aggravating. But he also knew she would not have contacted him if it wasn’t truly important.

He inserted the key card, noting and ignoring the DO
NOT
DISTURB
sign.

The indicator light on the door’s electronic lock switched to green and the latch released.

The interior was spacious, with a king-sized bed covered in plush purple pillows. A work area was provided at an oak-top desk with an ergonomic chair. The room occupied a corner, two windows facing East 42nd Street, the other offering views west toward 5th Avenue. The rest of the décor was what would be expected from a high-class, Midtown Manhattan hotel.

One Christmas Knight by Robyn Grady
Homicide My Own by Anne Argula
Breath of Earth by Beth Cato
Sweet Agony (Sweet Series Book 1) by Jessie Lane
Sleeper Agent by Ib Melchior
The Matchmaker's Replacement [Kindle in Motion] (Wingmen Inc. Book 2) by Rachel Van Dyken
Agatha Raisin and the Busy Body by Beaton, M.C.
Behind the Scenes at the Museum by Kate Atkinson
Wings of Love by Scotty Cade
Eleven Hours by Pamela Erens