The Knight in History (7 page)

The knights’ armor was also normally their own. Crossing a “damnable mountain” in the Anti-Taurus range in 1097 in the heat of summer and impeded by their armor, the knights “stood about gloomily…trying to sell their shields, fine armor, and helmets for three to five deniers, or whatever they could get….”
58
Later they “undertook to buy arms and fit and repair them.”
59

Transport and supplies were furnished at least in part by the leaders. Throughout the long journey to Constantinople, the Crusaders sought market rights, the opportunity to buy food. In the Balkans the count of Toulouse “bestowed many gifts upon the king of the Slavs [probably Bodin, a local prince] so that the Crusaders could buy in peace and look for the necessities of life.”
60
When these were denied, they resorted to foraging; in other words, looting. The anonymous knight who recorded the deeds of the followers of Bohemund d’Hauteville and Tancred reported crossing the Balkans in “very rich country”: “We…stayed for some days trying to buy provisions, but the inhabitants would sell us none…. So we seized oxen, horses, and asses, and anything else we could find….”
61

Once they arrived in the Holy Land, the Crusaders were supplied in part by sea—at Antioch first by a Genoese fleet that put in at nearby Port Simeon, later by English pilgrim ships, and at Jerusalem by another Genoese fleet. Raymond d’Aguilers praised the men “who dared to sail through the strange and vast surface of the Mediterranean and the [Atlantic] Ocean out of love of Crusading. The English…set sail on the Anglican Sea, and thus rounding the coast of Spain, bearing across the Ocean and ploughing through the waves of the Mediterranean, after great trials arrived at Antioch and Latakia in advance of our army. The English as well as the Genoese assured us commerce from Cyprus and other islands…. Daily these ships sailed to and fro over the sea.”
62

Away from the coast, the armies had to fend for themselves, which they did with fair success. The ripened harvests, Fulcher of Chartres wrote, were “prepared for their subsistence by God,” though the native population doubtless took a different view.
63

In military technology and technique, the First Crusade produced few innovations.
64
As in all medieval warfare, pitched battles played a minor role. Two were fought against the Turkish chief Kilij Arslan, near Nicaea and at Dorylaeum. The Crusaders also fought off sallies by the garrison of Antioch, repelled the relieving forces of Ridvan and Kerbogha, and routed an Egyptian army at Ascalon to bring the Crusade to a triumphant close. But sieges played the central role, with the Crusaders usually the besiegers, always at a disadvantage against defenders behind high walls. Yet Nicaea, Antioch, and Jerusalem were successively taken, the siege of Antioch occupying the entire winter and spring of 1097–1098. Lesser sieges were conducted at Ma’arrat al-Nu’man southeast of Antioch and at ’Arqah near Tripoli.

In the field, the Crusaders organized their troops in “battles,” successive arrays of knights and foot soldiers that attacked in turn. In the fight against Kerbogha near Antioch there were six “battles,” each a double line, with foot soldiers in the first, knights in the second.
65
The Turks, operating in large bands of light cavalry and relying on mounted archers, preferred the fast strike and the surprise, ambushing and attacking convoys and detached parties. At Dorylaeum they fell upon part of the Crusading army “with clashing of weapons and shrieking” and “fiercely let loose a shower of arrows,” driving the Crusaders in flight. The timely arrival of the rest of the army saved the day. “It is their custom to use such arms,” wrote Fulcher. “They were all cavalry. We, on the other hand, were both infantry and cavalry.”
66
Kerbogha’s army at Antioch, without the advantage of surprise, was overpowered by the feudal array and after a brief struggle, “when they realized the ensuing fight would be waged hand-to-hand with swords rather than at a distance with arrows,” fled into the mountains.
67 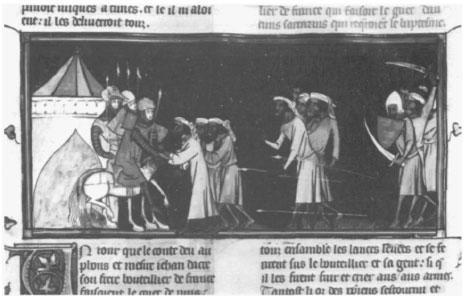 Yet the Crusaders came to admire the enemy, whom Urban had called “that wicked race.” The anonymous author of the
Gesta Francorum
, himself a knight, wrote after Dorylaeum, “What man, however experienced and learned, would dare to write of the skill and prowess and courage of the Turks…? They have a saying that they are of common stock with the Franks, and that no men except the Franks and themselves are naturally born to be knights. This is true, and nobody can deny it, that if only they had stood firm in the faith of Christ and holy Christendom, and had been willing to accept One God in Three Persons, and had believed rightly and faithfully that the Son of God was born of a virgin mother, that he suffered, and rose from the dead and ascended in the sight of his disciples into Heaven, and sent them in full measure the comfort of the Holy Ghost, and that he reigns in Heaven and earth, you could not find stronger or braver or more skillful soldiers, and yet by God’s grace they were beaten by our men.”
68 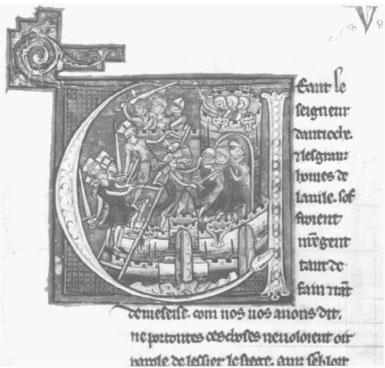 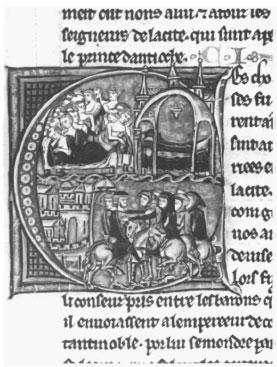 SICKNESS AMONG THE CRUSADING KNIGHTS AT ANTIOCH; SOME FLEE THE EPIDEMIC (BELOW, RIGHT).
(BIBLIOTHÈQUE NATIONALE, MS. FR. 9081, F. 65V.)

In the siege, the Crusading knights used all the techniques established by European experience: blockade, starving the enemy into surrender; siege machines; mining; escalade (assaulting the walls with scaling ladders); and ruse or bribery.

A prolonged blockade sometimes caused more suffering among the besiegers than the besieged. At Antioch “both the rich and the poor were desolate from hunger,” and the knights “ate the shoots of beanseeds growing in the fields and many kinds of herbs unseasoned with salt; also thistles…also horses, asses, and camels, and dogs and rats.”
69
At Ma’arrat al-Nu’man, according to Fulcher, the Crusaders resorted to cannibalism, cutting “pieces from the buttocks of the [dead] Saracens…which they cooked.”
70
At Jerusalem food supplies were adequate but the Crusaders suffered terribly from thirst, the Turks having filled up the wells and springs.
71

Siege machines included the battering ram, the catapult and ballista for hurling missiles, and the wooden tower to attack walls. Usually they were constructed on the spot. At Nicaea the Crusaders “had machines made, battering rams, sows [for undermining walls], wooden towers, and petrariae [stone throwers]…. Our enemy and we retaliated alternately with all our might in the struggle. Often, armed with our machines, we dashed on the city, but with the strong wall obstructing us, the assault was brought to nought. Often the Turks, often the Franks, struck by arrows or by stones, died.”
72

At Nicaea the Crusaders undermined a tower. “Men were assigned to do the digging, with
arbalistae
[crossbowmen] and archers to defend them on all sides. So they dug to the foundations of the wall and fixed timbers and wood under it and set fire to it.” The tower collapsed during the night, but the Turks hastily improvised a new wall and “when day came no one could harm them on that side.”
73
The city finally fell after the Crusaders fought off a relieving army, and a surrender was negotiated by the Byzantine emperor.

At Antioch the Crusaders built a number of “castles” (assault towers) to try to storm the walls, but finally they resorted to trickery. A Turkish leader opened the gate—according to Fulcher because Christ appeared and commanded him to “return the city to the Christians,”
74
according to other accounts because he was suitably bribed.
75

At Ma’arrat al-Nu’man, the defenders “hurled stones from catapults, darts, fire, [also] hives of bees and lime upon our men,” but under cover of a barrage of rocks and missiles the knights scaled the walls and by nighttime had captured most of the towers. Awaiting morning for the final assault, the knights were chagrined to find not only the enemy gone, but the pilgrims who had accompanied the army busy seizing “the lion’s share of booty and houses…while the knights…found poor pickings.”
76

The conquest of Jerusalem, like that of Ma’arrat al-Nu’man, was a victory of siege technology, but it was also one of psychological motivation. The knights fought with renewed ardor, and at first with improvised siege weapons. When these failed, they sent a detachment to Jaffa where the Genoese admiral William Embriaco supplied “ropes, hammers, axes, mattocks, and hatchets” and the know-how to assemble the machines. Everyone fell to. “We pressed the work, we labored, built, and cooperated…. Only the artisans, who were paid from public collections, and the men of [Count] Raymond, who got wages from his treasury, worked for money.” When the leaders of the army saw that the Saracens had strengthened the city’s walls facing the new machines, they set to work during the night shifting the machines to a new position. “Believe me,” wrote Raymond d’Aguilers, “the disjointing, transporting over a mile, and erecting of those machines was no small job.” On the morning of July 14 the assault began. As the siege machines were pushed toward the walls, “defenders rained down upon the Christians stones, arrows, flaming wood and straw, and threw mallets of wood wrapped with ignited pitch, wax, sulphur, tow, and rags.”
77

That night both camps worked furiously to repair walls and weapons, and in the morning the assault was renewed. By noon the Crusaders, baffled and discouraged, were contemplating defeat when, Raymond reported, a solitary knight “whose name is unknown to me, signaled with his shield from the Mount of Olives to the count [of Toulouse] and others to move forward.”
78
Spurred by his example, the knights renewed their attempts to scale the walls. The
Gesta
chronicler says that Litold, a Flemish knight from Tournai, was the first Crusader to set foot on the wall.
79
The gates were opened and the Crusaders poured into the city.

The Resume.Com Guide to Writing Unbeatable Resumes by Warren Simons, Rose Curtis
Fatalis by Jeff Rovin
Such Is My Beloved by Morley Callaghan
The Diving Bundle: Six Diving Universe Novellas by Kristine Kathryn Rusch
Shadows of Self by Brandon Sanderson
How I Met Your Mother and Philosophy by von Matterhorn, Lorenzo
150 Minecraft Secrets You've Never Seen Before: The Secrets Handbook by Silvia O'Dwyer
Chasing Lyrics (Music & Lyrics #1) by Debbie Dickerson
The Concise Oxford Dictionary of Quotations by Elizabeth Knowles
Graveyard Shift by Chris Westwood