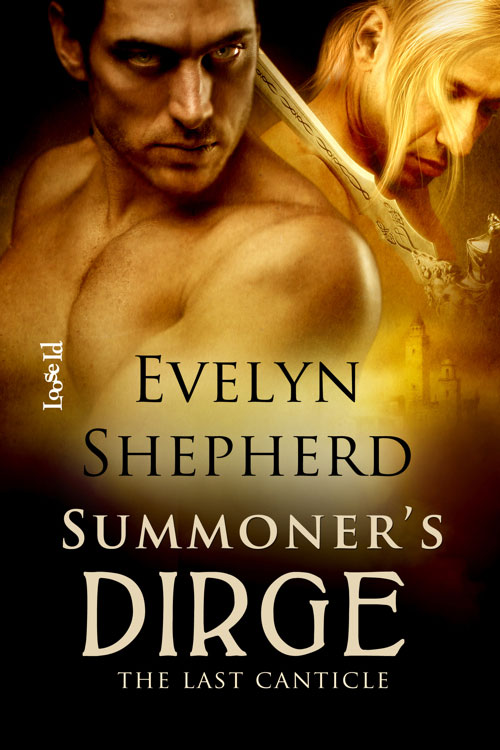 All rights reserved. This copy is intended for the original purchaser of this e-book ONLY. No part of this e-book may be reproduced, scanned, or distributed in any printed or electronic form without prior written permission from Loose Id LLC. Please do not participate in or encourage piracy of copyrighted materials in violation of the author’s rights. Purchase only authorized editions.

Thanks to Ann for all her dedication and help. I couldn’t have done this without her.

Balin finished checking the line that secured two large crates of
arrowga
herbs. The cargo bay of the airship,
The Windbreaker
, was packed with various boxes of spices from Terrasolis. They were to dock in Canaan to deliver the small aircraft
Fujin
and then bring the goods to Pheor’s capital, Civitatem Aurum. It was in Civitatem Aurum that Balin would get off the massive merchant ship.

From outside, hard winds slammed into the hull of the airship. For the last ten minutes, Balin had been going over the shipment with the other crewmen, double-checking each lock to make sure the crates wouldn’t go flying during the turbulence.

“Are you finished?” the crew master called to Balin.

“She’s secure. That should be the last of them,” Balin called.

“Come help me with
Fujin
,” the crew master ordered and moved over to the single-pilot aircraft. It was a beautiful black jet that gleamed like the midnight sky, with a small crimson aether ring in the rear to power the engine. Heavy ropes were bolted to the ground to keep the airship from sliding across the cargo bay.

A muffled clap of thunder shook the
Windbreaker
. Balin braced himself against a stack of crates, waiting for the tremors to subside, and then continued on to the small ship.

The crew master, a Terrasolian with skin the color of charcoal and eyes like feverish moons, gestured to the left side of
Fujin
. Balin moved around the airship and crouched to pull on the locks in the floor.

Thunder trumpeted outside, loud concussions that were barely softened by the steel walls of the
Windbreaker
. The airship rocked precariously again, knocking some of her men off their feet.

The crew master cursed under his breath. “How does Captain Reincore plan on us making it through this storm?”

The captain of the
Windbreaker
had been quiet as they rode steadfast through the tempest. Balin suspected that he was much more concerned with meeting his deadline than the safety of his men.

Balin rose to his feet. “She’s good. Nothing will be breaking her hold.”

Captain Reincore had announced a storm was cutting through the horizon directly across their route for Canaan. The massive cell stretched wide, offering no chance to go around. Now they heedlessly flew into the tempest.

With each passing second, Balin felt the ship tremble more. The floor planks vibrated, and the hull groaned painfully. Balin knew from experience that if they continued on, there would be no coming through the storm in one piece.

One glance and he could see that the crewmen of the
Windbreaker
knew their doomed fate. The merchant ship pitched to the side, slammed by a gale. Balin grabbed the wing of
Fujin
to anchor himself.

The lights flashed and went out, briefly submerging them in inky blackness. An alarm sounded through the ship, followed by the emergency power kicking on. Thunder and screams built in a symphony of horror, filling the cargo bay as the
Windbreaker
began to tilt forward.

A sharp crack echoed through the ship. Over the intercom Captain Reincore shouted, “Brace yourself, men!”

Balin gripped the wing of
Fujin
tightly. Men ran for the doors of the cargo bay. He could go with them, chase after safety that would not be found outside. The ship’s speed picked up, and Balin could hear the clatter of loose items hitting the walls of the bay area.

Without hesitation, Balin grabbed the dagger strapped to his side. Swiftly he moved around
Fujin
, slicing through the ropes. The coils snapped and shot up. The small aircraft began to tilt with the ship, dragged by gravity.

Balin came around the other side of the aircraft. The crew master turned in confusion. Before he could say anything, Balin planted a hard kick to his solar plexus. The crew master fell into a stack of crates, splintering wood and spilling aromatic spices.

Balin opened the door to the ship and pulled himself into the cockpit. He returned his dagger to his scabbard and switched on
Fujin
’s power. Life hummed through the body of the aircraft. The aether ring glowed a hazy red, spinning like a wheel of fire.

He turned hard on the steering wheel and angled the airship around so it faced the bay doors. He hit the guns and blasted a hole through the bay wall.

It was as if he had opened a rift to malltod. The air was sucked from the ship. Screaming men and boxes of herbs were sent tumbling into the sky.
Fujin
began to slip backward as the
Windbreaker
rapidly lost altitude.

Balin slammed on the power and shot out of the cargo bay and into the heart of the storm. Torrents of rain battered the small airship, which rocked and spun against the vicious gusts of wind. Lightning cracked and splintered over the bruised clouds.

Punishment rained down upon him.

His world had been swallowed by darkness. Balin fought to keep control of the ship. In a few brief flashes of light from the lightning, he could make out the
Windbreaker
crashing toward Zoria.

Dying wasn’t an option, not when he had been given a chance to start anew.

Balin had weathered storms far worse than this one.

Only two days prior, he’d been kneeling at the feet of Emperor Folken, given the choice between life and death.

A final kill and then Balin the Shadowwalker could cast aside the shackles of his purgatory. He could leave the damning abyss and walk once again in the light of man.

But only if he survived.

His bones rattled inside his body, beating against flesh until it felt like they would turn to dust. He clenched his teeth and tried to fly up, to where the clouds would break. It felt like the winds kept sucking him down.

Lightning ripped through the atmosphere. It struck the aether ring. Balin could only watch as the world became a dizzying spiral. His head slammed against the side compartment of
Fujin
. Glass splintered. Balin’s vision blurred as the ship sharply banked, and with a strained breath, his vision burned out.

“Did you believe you could just return? That your heinous transgressions against your country would be forgotten? You turned your back on us, Shadowwalker.” Emperor Folken’s voice cracked louder than the thunder outside and echoed in the throne room.

The candlelight reflected off the marble floor Balin knelt upon. At his side were two armed guards, each with an immobilizing hand on his shoulders. He lifted his gaze and unflinchingly met Emperor Folken’s cold citrine stare.

Lightning streaked across the sky and illuminated the rooftops of the desert capital. Emperor Folken raised his hands, and Balin braced himself for his sentencing.

He had known the risks for returning to the city of Eyrie. He was an assassin. His ties to the world of light had been severed long ago. But when word of his mother’s passing had reached his ears, he couldn’t avoid his homeland any longer.

If only for a second, he would remember the boy he had once been.

“Leave us,” Emperor Folken ordered and waved the guards off.

They left without a word. Balin’s arms were still bound behind his back. The chains were heavy and the manacles painful, but they couldn’t compare to the despair that still gripped his heart.

“I will not beg,” Balin said when the heavy doors to the throne room closed.

“And I would not expect you to. Whether you beg for your life or not does not matter to me. What matters is the fate of Zoria.”

Emperor Folken pushed himself to his feet. He was dressed in the black robes of mourning. A vein of lightning that shot across the sky and ominously lit up the room reflected off a thick gold chain around his neck.

“What does it matter to me what becomes of Zoria?” Balin asked callously.

“Nothing, and perhaps that is for the best,” Emperor Folken said.

Balin watched him suspiciously. He could not read the king’s motives, but he didn’t have to wait long for Emperor Folken’s plans to be revealed.

“I will give you a choice, so listen closely, Shadowwalker. There are greater men who would be given less.”

Balin tracked Emperor Folken as he walked to the closed doors of the balcony and stopped. He stood turned away from Balin, watching as a storm pummeled his kingdom. The regal outline of Emperor Folken’s silhouette lit up in flashes before extinguishing like a snuffed-out candle.

“A war is rising, one that will sweep across Zoria. The sun changes with each passing day. I can see the impending danger that looms not only over Terrasolis, but all the lands of Lar’s Kingdom. King Vasilis of Pheor pointlessly wages battle against Kalrune. Should he win…well, you do not care about that, do you?”

Emperor Folken didn’t wait for Balin to answer. They both knew Balin’s stance. He cared less about thrones and their games. His agenda was much simpler: death to the lowest bidder.

“I will grant you immunity. You may return to Terrasolis a free man, charges wiped clean in this land. I cannot speak for the other countries, but you may once more roam safely through the streets of Eyrie. All you must do is slay King Vasilis and put an end to his tyranny.”

“Then I shall have the gallows prepared by dawn. What will it be, Shadowwalker?” Emperor Folken turned to face Balin. Thunder trumpeted behind him, ushered in by brilliant bolts of lightning.

“I am here to serve my king.” The words rang with a hard, unforgiving note of finality.

Balin woke to a beetle crawling across his face and a sharp pain running up his side. He groggily opened his eyes and brushed the bug away. The world was a red blur filtered by unrelenting shadows. He tested his weight on his hands and pushed up his battered body. Agony seized thim, possibly caused by cracked ribs, but it was not halting. He could move his legs, and his limbs seemed to be all intact.

I Pledge Allegiance by Pat Mora
Deadly Heat by Castle, Richard
The TRIBUNAL by Peter B. Robinson
Death Blow by Ashley Harma
The City PI and the Country Cop by xxxxxxxxxxxx
Equinox by Lara Morgan
Some Enchanted clair : A Magical Bakery Mystery (9780698140561) by Cates, Bailey
The Recluse Storyteller by Mark W Sasse
Deep Sea by Annika Thor
Return from the Stars by Stanislaw Lem