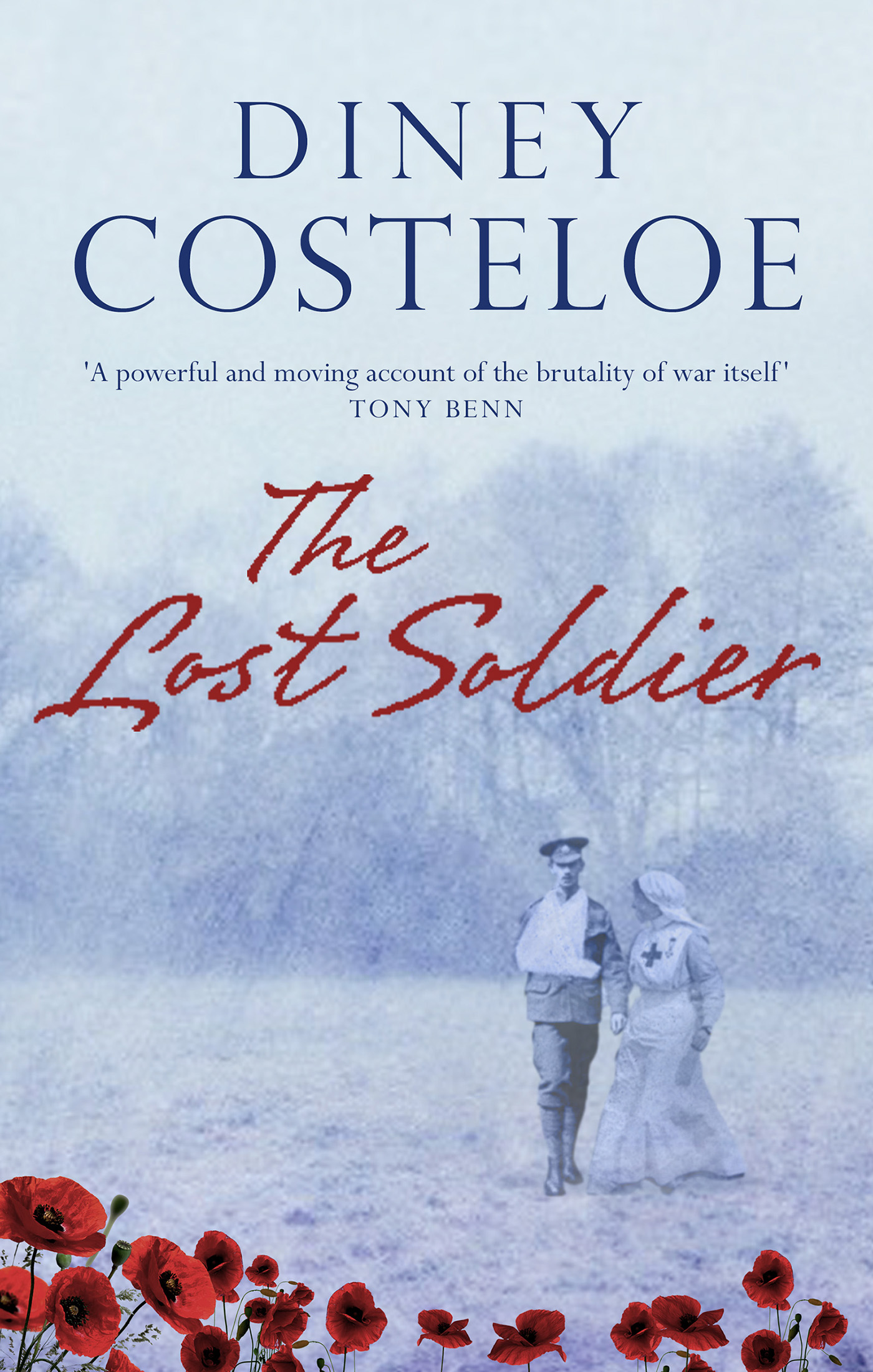 About
The Lost Soldier

To the Shot at Dawn Campaign

The night air was chilly, clinging as a misty drizzle fell steadily. The child clung to her mother’s skirt, afraid of the dark, afraid of the night sounds, cold and miserable. She began to whimper, her quiet tears escalating into wails.

At once her mother turned and hushed her with such unaccustomed sharpness that she gulped a rising wail and stuffed one small fist into her mouth, while the other closed more tightly on the rough wool of the skirt.

“Be quiet, like a good girl,” hissed her mother again, “and stay here.” She tried to move away, but the child’s grasp on her skirt held her back.

“Let go,” the mother whispered harshly, and with some force uncurled the little girl’s fingers from the skirt. She knelt down so her face was level with her daughter’s, though neither could see more than the outline of the other in the darkness. “I need you to stay here, pet,” she said, more gently. “I’m just going to fetch something. I’ll be back in a moment, I promise. Just stand still here. I won’t leave you.” She leant forward and touched her lips to the child’s damp cheek and smoothed her wet hair comfortingly, before moving off into the night.

Terrified, the little girl stood rooted to the spot, her wide eyes staring into the black emptiness where her mother had been. She strained her ears to listen for her mother coming back, but all she could hear was the sound of the rain dripping off the nearby trees and a quiet rustling in the grass near her feet. The hoot of an owl above her startled her into a cry, but she stayed where she was. She was afraid of the dark night and what it might hide, but she was even more afraid that her mother wouldn’t find her if she moved. Another sound made her jump, but this time it was her mother creeping through the dark night towards her, carrying something.

“Rosemary, are you there, girl?” came the quiet whisper.

“Here I am, Mam.” Her reedy voice cracked with fear and relief.

There were more sounds then, a shovel breaking the earth, grunting and panting as the metal bit into the ground.

“What are you doing, Mam?” whispered the little girl.

“Just be quiet, there’s a love,” replied her mother softly, “and I’ll show you in a minute.”

The digging sounds went on for several moments and then the little girl felt her mother’s hand on hers. “Come over here.” She followed the pull of the hand until she was standing at her mother’s side, safely within the circle of her arm. It was still raining, but there was the faintest moonlight breaking through the ragged clouds, and with her night vision now well established, she could see a small hole had been dug in the wet ground. Beside it stood a tiny tree, ready for planting.

“Now, Rosemary,” said her mother, “we’re going to plant a tree for your dad, just like the other ladies and gentlemen did this afternoon. Remember?”

Rosemary nodded in the darkness. She had seen the group of grown ups standing round one end of the village green earlier in the day, planting trees.

“Those are for the poor soldiers who didn’t come home from the war,” her nan had told her as they stood at a distance and watched the ceremony. “Each tree’s got a name beside it, see, so that everyone remembers.”

“Well, they didn’t know to plant one for your dad,” murmured her mother, now, “so we’re doing it ourselves, just you and me.” She reached for the little tree and carefully placed it into the hole she had dug. Holding it steady she whispered, “Push some of the earth back into the hole, Rosy.”

The little girl knelt down and pushed some of the wet, muddy earth into the hole. It stuck to her fingers, thick and gluey, and smelt of damp leaves. She didn’t like the feel of it and pulled her hands away, holding them out, but instead of wiping them as she would normally have done, her mother ignored them and whispered, “That’s it, good girl, just a bit more.” Looking across her daughter’s head, she scanned the darkness nervously. Reluctantly the child pushed more of the heaped earth in round the tree roots, until her mother said softly, “That’ll do.” She picked up the spade and quickly filled the rest of the hole, smoothing away the extra earth so that the heap disappeared. Scraping together some leaf mould, she spread it round the base of the tree, so that the new tree was no more conspicuous than the other eight ash saplings that had been planted earlier in the day.

She put down the spade and reached for the big, black handbag, which she had discarded when they’d arrived and pulled from it a small photo frame attached to a wooden spike. Behind the glass, written in neat, black capitals on a piece of card, were the words
FOR THE UNKNOWN SOLDIER.
She put it into her daughter’s hands. “The writing on this is for your dad,” she explained, “so we’ll put it in the ground beside the tree.” She placed her hands over the child’s and together they pushed the long wooden prong on the base of the frame, into the ground beside the little ash tree’s trunk.

“God bless you,” she murmured, “we’ll never forget you.” She pulled her daughter, and his, into her arms, and their tears mingled in the darkness with the falling rain. For a moment they stayed together kneeling on the wet ground and then the mother got to her feet. She bent and kissed her daughter’s wet cheek. “This is our secret, pet,” she said gently. “You mustn’t tell anyone about us planting this tree for Dad. It’s our secret?”

“Not even Nan and Gramp?” asked the little girl. She was not surprised at this prohibition, Mam never talked to her about her dad when Nan or Gramp was there.

“Not even Nan and Gramp,” replied her mother. “Only you and me in the whole world will ever know who this tree is for, and who planted it. Promise?”

“Promise,” answered the little girl solemnly. “In the whole world… ever!”

The moon sailed out from behind the bank of cloud, and the two hurried away, anxious not to be seen by any curious eyes, but that night the mother went to bed with a quieter mind than she had known for nearly four years.

The ninth tree stood peacefully in the moonlight, an extra tree in a new-made grove of remembrance.

“The Ashgrove?” Mike Bradley, managing director of Brigstock Jones the developers, for once in his life was at a loss. “I’m sorry, madam, if you could… I mean of course I…”

“The trees at the end of the green,” Cecily said patiently. “You can’t fell those trees to make a road! That’s the Ashgrove.”

“Madam, I do assure you…” Mike Bradley began, wondering who the hell this weird old bird was, and angry at being attacked like that by an old dear who was ninety if she was a day, “that if there was any other…”

“And do you know what the Ashgrove is, my good man?” Cecily continued calmly, as if he hadn’t spoken. “No, of course you don’t. You haven’t a clue.”

Cecily interrupted him again. “It’s a memorial,” she said. “That’s what it is.”

All through the meeting there had been shuffling and muttering, even while the main speakers were on their feet, but now you could have heard the proverbial pin drop, all eyes were on Cecily.

“The Ashgrove was planted eighty years ago, in 1921,” Cecily said, “as a memorial to those from our village who died for their king and country in the Great War. For our boys who didn’t come home. Each tree was planted for a man who died, and one of them was my brother, Will.” Cecily’s eyes were fixed firmly on Mike Bradley as she spoke. “I’m ninety-three next June. My brother, Will Strong, was just seventeen when he went, and he was dead before he was eighteen, blown to bits by a shell. All that’s left of him now is that tree planted in his memory, all that’s left of him and the other boys who went. If the only way you can put your road in, is by cutting down those trees, destroying the memorial to those boys, then I tell you this, Mr Bradley or whoever you are,” she glared up at the platform, “you’ll do it over my dead body!”

Mike Bradley had been hard at work all evening trying to sell Charlton Ambrose the proposed development of its allotment site, hard at work as the village was divided over the proposed development of the old allotments. When Cecily Strong had finished speaking, the meeting, which had been rumbling ominously all evening, finally erupted. The momentary silence that greeted her words was shattered as everyone started to talk at once. Ignoring the stir she had caused and with great dignity, the old lady grasped her zimmer, walked slowly through the hall and out into the night.

Mike Bradley was on his feet at once, and with the very force of his personality quelled the uproar in the room.

“Ladies and gentlemen,” he cried, “ladies and gentlemen, I can assure you that the memory of the war dead will not be dishonoured. My company will, of course, erect a stone monument in their memory, a permanent memorial to their courage and sacrifice.”

“They’ve got a permanent memorial now,” called out someone angrily, “till you go and cut it down, that is.”

The noise erupted again, people calling out, trying to make themselves, and their views about this latest development, heard. Mike Bradley sat down again, his face red with anger, furious that he had been ambushed like this. Why hadn’t he been told about these memorial trees? Someone at the office hadn’t done his homework properly and whoever that was, his head would roll. Mike Bradley did not like being in situations he could not control.

Access across the village green to the site was critical to the whole project, otherwise he’d never have agreed to replace this tatty village hall as an essential part of the deal. Bradley glowered round the room, but he was forgotten in the uproar.

It was quite clear to Paula Sharp, chair of the parish council, that the meeting would go no further this evening and she banged again with her gavel, trying to bring some order.

“Ladies and gentlemen, Miss Strong has brought up a matter which will concern several families in the village, and I am sure must be discussed in some other forum than this. I thank Mr Bradley for his offer to replace the memorial trees, but clearly we can proceed no further this evening, and so I declare the meeting closed.”