The Lost Star Episode One 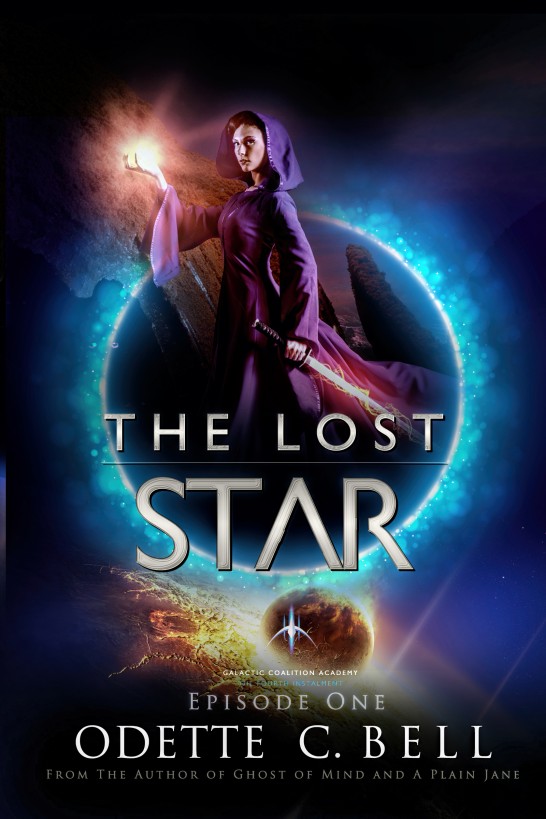 All characters
in this publication are fictitious, any resemblance to real
persons, living or dead, is purely coincidental.

Some
are born into responsibility. Some seek it out.

And
some turn from it.

Ava
is a priestess of Avixa, a powerful being with a powerful destiny
to keep her people on the true and righteous path.

Yet
it is a destiny she does not want. To flee it, she joins the
Coalition Academy. But her past cannot so easily be left behind.
When she joins the newest ship in the fleet, a series of
unfortunate accidents befall her.

Soon
she finds herself thrust into a secret war. One that will span the
entire Milky Way. Yet she is not alone. The unpredictable Hunter
McClane is by her side. Together they must find out what’s at stake
before it’s too late.

The
Lost Star is a four-part serialization that plunges you into a
sprawling sci-fi adventure that charts the galaxy. Ava and Hunter
are pitted against a shadowy conspiracy, slave traders, and
ultimately a legend that threatens everything and
everyone….

Ava stared as the other priestesses came
towards her out of the darkened room. Their bare tattooed feet
padded over the dark black stone of the temple.

She felt a flutter of fear chase through her
heart.

They began chanting. The sonorous hum of
their voices filled the high-ceilinged chamber, vibrating through
the floor and up into her naked form.

A crackle of energy escaped over her hands,
flecks of electric blue lightning that sunk back into her
flesh.

Her nerves were getting the better of her
for the first time in years.

“
Control yourself.” T
he head priestess appeared out of the
shadows, her luminescent purple eyes flashing in the
dark.

Ava took a breath and did as she was told,
forcing her nerves to settle as a spark of exhilaration took their
place.

“
You have chosen the path of the stars,”
the priestesses chanted as one in the old tongue of the Avixan
people.

“I have,” Ava responded.

“You wish to leave the clan to continue our
work beyond this planet.”

Ava hesitated. The others would believe
she was pausing for effect.

Ava wasn’t doing this to continue the work
of the priestess Clan of Avixa.

She was doing this to get away.

To live the kind of life she’d always
wanted. A simple one devoid of responsibility.

Voice a word of that, and the Chief
Priestess would lock her away. So she took a breath and nodded, her
vibrant red hair slicing over her bare shoulders. “I vow to
continue our work amongst the stars.”

“You will watch the Rest?”

“I will watch them.”

“
If they do the forbidden—”

“
If they turn against the
Others
—”

“And if you hear the call?”

She paused again. Once more she forced
herself to give a nod, her red locks sliding over her shoulders and
forming a veil over her face. It blocked her eyes as she squeezed
them shut and lied: “I will come.”

“
Then you are ready. Your locks have been
completed.” The Chief Priestess drew her hands forward, her long
fingernails suddenly crackling with energy.

A charge of power exploded over them, wisps
of smoke curling around her crooked upturned fingers.

With a deep reverberating breath, the
priestess wrought space, and something appeared right in her
hands.

All priestesses wore locks. It was part of
the pact – the sole agreement that had protected her people for
thousands of years.

Ava’s current locks were little more than
slim golden bracelets around both wrists.

They sapped her energy, kept her powers in
check.

She shuddered to think what the enormous
armlets in the priestess’ hands would do.

They’d been made specially. Though the
Chief Priestess had transported them here with her abilities, she
hadn’t crafted them out of thin air. The Clan’s best scientists had
been working on them for two years.

Only now they’d perfected them could Ava
leave Avixa.

A nervous knot formed in her stomach as
she stared at them, the gold glinting under the light of the Chief
Priestess’ power.

“
These locks will keep you in check—” the
Chief Priestess proclaimed.

“
As we must all be kept in check,” the
other priestesses continued the refrain.

“
Even over the great distance that
separates you from this, our home world, you will remain connected.
If you hear the call—”

The call would unlock her armlets. A call
that would never come.

For all the pomp and circumstance of the
priestess Clan, they were never used.

Their sole purpose was to keep the rest of
the Avixa devils under check. Though devils was a pejorative term,
at times, it was accurate.

Ava’s people had natural power, far
greater than most other races in the Milky Way.

I
n the past, they used that power to enslave and steal – to
rule over other races.

The priestess Clan consisted of the most
powerful in Avixa society. They existed to keep the others in
check. And they in turn were kept in check by the locks they
wore.

“
You are ready,” the
Chief Priestess proclaimed. It wasn’t a
question – it was a statement. “Kneel.”

“
These locks will cost you
greatly. You will be weak, all
your powers kept in check. But if you hear the call—”

“I will respond,” Ava replied softly.

“You will respond,” they all repeated, their
strident voices echoing through the room.

“
You will be the first among the
priestesses to walk amongst the stars with the Rest and the Others.
You will continue our ways.”

The Rest referred to the rest of Avixan
society. Those Ava had to watch and keep in check. The Others
referred to every other being in the galaxy.

“
I will continue your ways.” Ava held her
wrists up, her hair fanning in front of her face, a few loose
strands straying over her wrists and her upheld
forearms.

“
You will continue
our
ways,” the Chief Priestess corrected
immediately.

Ava’s stomach kicked as she realized what
she’d said. “I will continue
our
ways.”

“You will watch over the Rest. Be their
shepherd.”

“I will watch. I will guide.” Though the
words slipped from Ava’s mouth, they meant nothing.

The priestess Clan wasn’t called upon
anymore. Tight control was held on Avixan society by the ruling
government. Democracy was now doing what the priestess Clan had
done for thousands of years – keep its people on a peaceful
path.

The priestesses, for all their
self-importance, just weren’t important anymore.

That’s why Ava needed to get away so
desperately – she knew that out there in space none of this would
matter.

She wouldn’t be a sacred Avixan priestess
– she’d just be another recruit at the Galactic Coalition
Academy.

It would be quiet, it would be simple, and
there’d be no more responsibility.

For once, she’d be normal.

So she kept her arms held up.

The Chief Priestess loomed above her as
the others began to chant.

Nerves mixed with excitement and darted
hard through her gut and up into her chest making it hard to
breathe.

Suddenly the chanting cut out.

In total silence, the Chief Priestess held
the open armlets under Ava’s wrists.

The chanting started up again, growing
louder and louder until it felt like it would cause the hall to
crumble, let alone tear through her bones.

The priestesses hit a certain pitch, and
Ava’s existing bands fell off, falling onto the floor with a
clang.

For just a second – a split second – Ava
felt her natural power.

It poured through her, so much energy she
felt as if she could rival a sun.

As the priestesses fell into silence,
there was a click, and the armlets snapped around Ava’s
arms.

At first she felt nothing.

Then she screamed. She pitched backwards,
hair fanning over her naked body as she thrashed over the cold
black stone.

She felt the armlets lock her in. They
slammed around her like the thickest most impenetrable walls.

A part of her screamed as she was shut away
from her true power.

But gradually it grew silent.

She lay there breathing.

“
Stand.” The Chief Priestess beckoned her
up with a sweep of her hand.

Ava stumbled to her feet.

Despite the numbing pain, she smiled.

Though it was truly painful
to be blocked from her true
powers, it was a pain she would gladly endure for the promise of
freedom.

She forced herself to take a step forward,
then another, until finally she walked out of the temple and out
into the light.

Ava walked up the steps, heavy data
pads in her arms.

They banged against her armlets.

Most of the hurrying cadets around her
paid her and her armlets no attention. They never did. Ava had been
at the Academy five years now. Today she would graduate.

She doubted more than a handful of people
knew her name.

Sighing to herself as the heavy weight of
the data pads started to get to her, she mounted the last step and
turned briefly to catch the view.

And what a view it was. Whole sections of
the Academy main grounds had been rebuilt after the Axira incident
several years back. Now the primary command building had a grand
sweeping set of steps that led up to it. Even without climbing all
100 floors of the megalithic building, you still got a great view
of the bay beyond.

She stood and waited for her breath to
return as the ships sailed in and out of the horizon, darting like
silver minnows in a crystal clear pool.

A few young first-year cadets sprang up the
steps past her, none out of breath, even though they were carrying
heavy equipment just like she was.

Ava would never be fit like them, no matter
how much training she underwent.

Unless and until her armlets were removed.
But they could not be removed by her, or by the entire combined
engineering expertise of the Academy.