Read The Making of Americans, Being a History of a Family's Progress Online

The Making of Americans, Being a History of a Family's Progress

BOOK: The Making of Americans, Being a History of a Family's Progress
>>DOWNLOAD HERE >>READ ONLINE NOW
ads 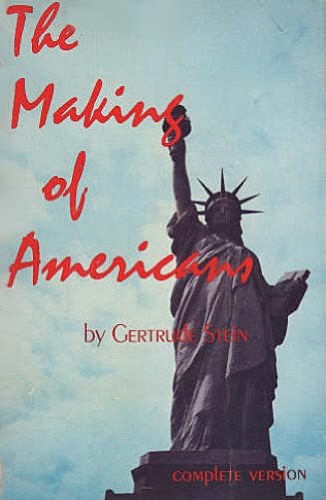 The Making Of Americans, Being A History Of A Family's Progress

The Making Of Americans

Once an angry man dragged his father along the ground through his own orchard. “Stop!” cried the groaning old man at last, “Stop! I did not drag my father beyond this tree.”
It is hard living down the tempers we are born with. We all begin well, for in our youth there is nothing we are more intolerant of than our own sins writ large in others and we fight them fiercely in ourselves; but we grow old and we see that these our sins are of all sins the really harmless ones to own, nay that they give a charm to any character, and so our struggle with them dies away.


It has always seemed to me a rare privilege, this, of being an American, a real American, one whose tradition it has taken scarcely sixty years to create. We need only realise our parents, remember our grandparents and know ourselves and our history is complete.
The old people in a new world, the new people made out of the old, that is the story that I mean to tell, for that is what really is and what I really know.
Some of the fathers we must realise so that we can tell our story really, were little boys then, and they came across the water with their parents, the grandparents we need only just remember. Some of these our fathers and our mothers, were not even made then, and the women, the young mothers, our grandmothers we perhaps just have seen once, carried these our fathers and our mothers into the new world inside them, those women of the old world strong to bear them. Some looked very weak and little women, but even these so weak and little, were strong always, to bear many children.
These certain men and women, our grandfathers and grandmothers, with their children born and unborn with them, some whose children were gone ahead to prepare a home to give them; all countries were full of women who brought with them many children; but only certain men and women and the children they had in them, to make many generations for them, will fill up this history for us of a family and its progress.
Many kinds of all these women were strong to bear many children.
One was very strong to bear them and then always she was very strong to lead them.
One was strong to bear them and then always she was strong to suffer with them.
One, a little gentle weary woman was strong to bear many children, and then always after she would sadly suffer for them, weeping for the sadness of all sinning, wearying for the rest she knew her death would bring them.
And then there was one sweet good woman, strong just to bear many children, and then she died away and left them, for that was all she knew then to do for them.
And these four women and the husbands they had with them and the children born and unborn in them will make up the history for us of a family and its progress.
Other kinds of men and women and the children they had with them, came at different times to know them; some, poor things, who never found how they could make a living, some who dreamed while others fought a way to help them, some whose children went to pieces with them, some who thought and thought and then their children rose to greatness through them, and some of all these kinds of men and women and the children they had in them will help to make the history for us of this family and its progress.
These first four women, the grandmothers we need only just remember, mostly never saw each other. It was their children and grandchildren who, later, wandering over the new land, where they were seeking first, just to make a living, and then later, either to grow rich or to gain wisdom, met with one another and were married, and so together they made a family whose progress we are now soon to be watching.

Been Loving You Too Long by Donavan, Seraphina
The Power Broker by Stephen Frey
Getting Over Getting Mad: Positive Ways to Manage Anger in Your Most Important Relationships by Judy Ford
Vengeance: A Kindred Sons Mafia Romance by Beth Wynne
Rebel Kiss: A Historical Romance Novel (Scottish Rebels Book 1) by Stone, Jenna
The Olympus Device: Book Three by Joe Nobody
Fade to Black by Alex Flinn
Real Estate and Murder (A Port Grace Cozy Mystery Book 1) by Emily Page
The Eight Walls of Rogar: An Epic Fantasy Adventure Series! (The Lost Kingdoms of Laotswend Trilogy--Book One) by Woodward, William
Curve Struck (A Celebrity Stepbrother Romance) by Christa Wick