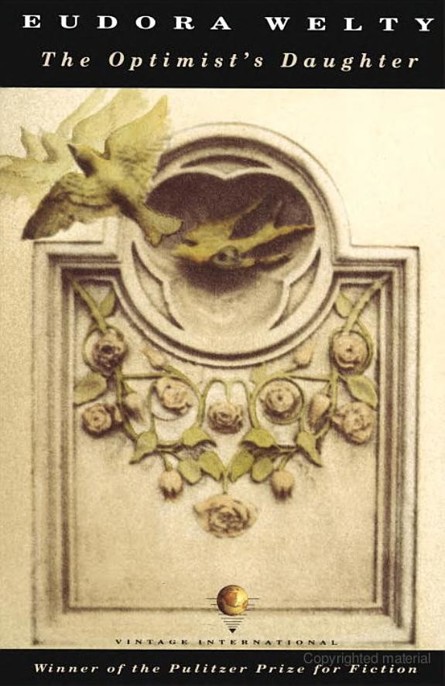 A Curtain of Green

The Bride of the Innisfallen

One Time, One Place

The Eye of the Story

A
NURSE
held the door open for them. Judge McKelva going first, then his daughter Laurel, then his wife Fay, they walked into the windowless room where the doctor would make his examination. Judge McKelva was a tall, heavy man of seventy-one who customarily wore his glasses on a ribbon. Holding them in his hand now, he sat on the raised, thronelike chair above the doctor’s stool, flanked by Laurel on one side and Fay on the other.

Laurel McKelva Hand was a slender, quiet-faced woman in her middle forties, her hair still dark. She wore clothes of an interesting cut and texture, although her suit was wintry for New Orleans and had a wrinkle down the skirt. Her dark blue eyes looked sleepless.

Fay, small and pale in her dress with the gold buttons, was tapping her sandaled foot.

It was a Monday morning of early March. New Orleans was out-of-town for all of them.

Dr. Courtland, on the dot, crossed the room in long steps and shook hands with Judge McKelva and Laurel. He had to be introduced to Fay, who had been married to Judge McKelva for only a year and a half. Then the doctor was on the stool, with his heels hung over the rung. He lifted his face in appreciative attention:
as though it were he who had waited in New Orleans for Judge McKelva—in order to give the Judge a present, or for the Judge to bring him one.

“Nate,” Laurel’s father was saying, “the trouble may be I’m not as young as I used to be. But I’m ready to believe it’s something wrong with my
eyes.”

As though he had all the time in the world, Dr. Courtland, the well-known eye specialist, folded his big country hands with the fingers that had always looked, to Laurel, as if their mere touch on the crystal of a watch would convey to their skin exactly what time it was.

Dr. Courtland nodded, as though that were a good day for it. “Tell me about the little disturbance,” he said.

“I’d come in. I’d done a little rose pruning—I’ve retired, you know. And I stood at the end of my front porch there, with an eye on the street—Fay had slipped out somewhere,” said Judge McKelva, and bent on her his benign smile that looked so much like a scowl.

“I was only uptown in the beauty parlor, letting Myrtis roll up my hair,” said Fay.

“And I saw the fig tree,” said Judge McKelva. “The fig tree! Giving off flashes from those old bird-frighteners Becky saw fit to tie on it years back!”

Both men smiled. They were of two generations but
the same place. Becky was Laurel’s mother. Those little homemade reflectors, rounds of tin, did not halfway keep the birds from the figs in July.

“Nate, you remember as well as I do, that tree stands between my backyard and where your mother used to keep her cowshed. But it flashed at me when I was peering off in the direction of the Courthouse,” Judge McKelva went on. “So I was forced into the conclusion I’d started seeing behind me.”

Fay laughed—a single, high note, as derisive as a jay’s.

“
I
looked. I couldn’t see anything had got in it,” said Fay. “One of those briars might have given you a scratch, hon, but it didn’t leave a thorn.”

“Of course, my
memory
had slipped. Becky would say it served me right. Before blooming is the wrong time to prune a climber,” Judge McKelva went on in the same confidential way; the doctor’s face was very near to his. “But Becky’s Climber I’ve found will hardly take a setback.”

“Hardly,” the doctor murmured. “I believe my sister still grows one now from a cutting of Miss Becky’s Climber.” His face, however, went very still as he leaned over to put out the lights.

“It’s dark!” Fay gave a little cry. “Why did he have to go back there anyway and get mixed up in those
brambles? Because I was out of the house a minute?”

“Because George Washington’s Birthday is the time-honored day to prune roses back home,” said the Doctor’s amicable voice. “You should’ve asked Adele to step over and prune ’em for you.”

“Oh, she offered,” said Judge McKelva, and dismissed her case with the slightest move of the hand. “I think by this point I ought to be about able to get the hang of it.”

Laurel had watched him prune. Holding the shears in both hands, he performed a sort of weighty saraband, with a lop for this side, then a lop for the other side, as though he were bowing to his partner, and left the bush looking like a puzzle.

“Oh, a dimness. Nothing to call my attention to it like that first disturbance.”

“So why not leave it to Nature?” Fay said. “That’s what I keep on telling him.”

Laurel had only just now got here from the airport; she had come on a night flight from Chicago. The meeting had been unexpected, arranged over longdistance yesterday evening. Her father, in the old home in Mount Salus, Mississippi, took pleasure in telephoning instead of writing, but this had been a curiously reticent conversation on his side. At the very last, he’d said, “By the way, Laurel, I’ve been getting a little interference with my
seeing
, lately. I just might give Nate Courtland a chance to see what he can find.” He’d
added, “Fay says she’ll come along and do some shopping.”

His admission of self-concern was as new as anything wrong with his health, and Laurel had come flying.

The excruciatingly small, brilliant eye of the instrument hung still between Judge McKelva’s set face and the Doctor’s hidden one.

Eventually the ceiling lights blazed on again, and Dr. Courtland stood, studying Judge McKelva, who studied him back.

“I
thought
I was bringing you a little something to keep you busy,” Judge McKelva said in the cooperating voice in which, before he retired from the bench, he used to hand down a sentence.

“All right, you can fix that,” said Laurel’s father.

“It needs to be repaired without any more waste of precious time.”

“All right, when can you operate?”

“Just for a scratch? Why didn’t those old roses go on and die?” Fay cried.

“But this eye didn’t get a scratch. What happened didn’t happen to the outside of his eye, it happened to the inside. The flashes, too. To the part he sees with, Mrs. McKelva.” Dr. Courtland, turning from the Judge and Laurel, beckoned Fay to his chart hanging on the wall. Giving out perfume, she walked across to
it. “Here’s the outside and here’s the inside of our eye,” he said. He pointed out on the diagram what would have to be done.

Judge McKelva inclined his weight so as to speak to Laurel in her chair below him. “That eye wasn’t fooling, was it!” he said.

Dr. Courtland led the Judge to the door and into the hallway. “Will you make yourself comfortable in my office, sir, and let my nurse bother you with a few more questions?”

When he returned to the examining room he sat in the patient’s chair.

“Laurel,” he said, “I don’t want to do this operation myself.” He went on quickly, “I’ve kept being so sorry about your mother.” He turned and gave what might have been his first direct look at Fay. “My family’s known his family for such a long time,” he told her—a sentence never said except to warn of the unsayable.

“What is the location of the tear?” Laurel asked.

“Close to central,” he told her. She kept her eyes on his and he added, “No tumor.”

“Before I even let you try, I think I ought to know how good he’ll see,” said Fay.

“Now, that depends first on where the tear comes,” said Dr. Courtland. “And after that on how good a
mender the surgeon is, and then on how well Judge Mac will agree to take our orders, and then on the Lord’s will. This girl remembers.” He nodded toward Laurel.

“An operation’s not a thing you just jump into, I know that much,” Fay said.

“You don’t want him to wait and lose all the vision in that eye. He’s got a cataract forming on his other eye,” said Dr. Courtland.

“I found it before I left Mount Salus. It’s been coming along for years, taking its time. He’s apprised; he thinks it’ll hold off.” He smiled.