Read The Power of Habit: Why We Do What We Do in Life and Business Online

The Power of Habit: Why We Do What We Do in Life and Business

BOOK: The Power of Habit: Why We Do What We Do in Life and Business
3.47Mb size Format: txt, pdf, ePub
Read Book Download Book
ads 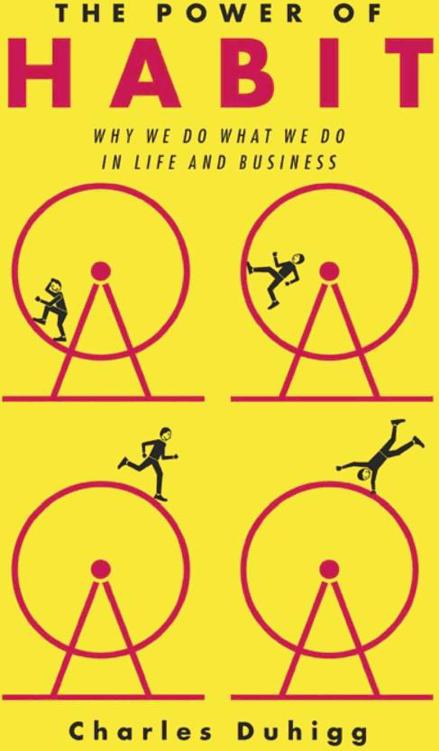 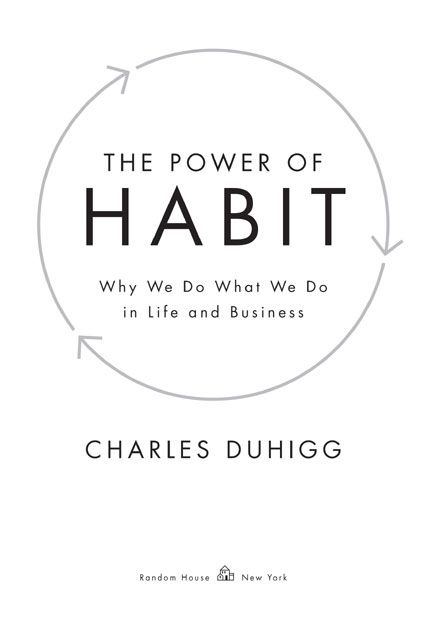 The Power of Habit
is a work of nonfiction. Nonetheless, some names and personal characteristics of individuals or events have been changed in order to disguise identities. Any resulting resemblance to persons living or dead is entirely coincidental and unintentional.

PART ONE
The Habits of Individuals

1. THE HABIT LOOP
How Habits Work

2. THE CRAVING BRAIN
How to Create New Habits

3. THE GOLDEN RULE OF HABIT CHANGE
Why Transformation Occurs

4. KEYSTONE HABITS, OR THE BALLAD OF PAUL O’NEILL
Which Habits Matter Most

5. STARBUCKS AND THE HABIT OF SUCCESS
When Willpower Becomes Automatic

6. THE POWER OF A CRISIS
How Leaders Create Habits Through Accident
and Design

7. HOW TARGET KNOWS WHAT YOU WANT BEFORE YOU DO
When Companies Predict (and Manipulate) Habits

PART THREE
The Habits of Societies

8. SADDLEBACK CHURCH AND THE MONTGOMERY BUS BOYCOTT
How Movements Happen

9. THE NEUROLOGY OF FREE WILL
Are We Responsible for Our Habits?

APPENDIX
A Reader’s Guide to Using These Ideas

She was the scientists’ favorite participant.

Lisa Allen, according to her file, was thirty-four years old, had started smoking and drinking when she was sixteen, and had struggled with obesity for most of her life. At one point, in her mid-twenties, collection agencies were hounding her to recover $10,000 in debts. An old résumé listed her longest job as lasting less than a year.

The woman in front of the researchers today, however, was lean and vibrant, with the toned legs of a runner. She looked a decade younger than the photos in her chart and like she could out-exercise anyone in the room. According to the most recent report in her file, Lisa had no outstanding debts, didn’t drink, and was in her thirty-ninth month at a graphic design firm.

“How long since your last cigarette?” one of the physicians asked, starting down the list of questions Lisa answered every time she came to this laboratory outside Bethesda, Maryland.

“Almost four years,” she said, “and I’ve lost sixty pounds and run a marathon since then.” She’d also started a master’s degree and bought a home. It had been an eventful stretch.

The scientists in the room included neurologists, psychologists, geneticists, and a sociologist. For the past three years, with funding from the National Institutes of Health, they had poked and prodded Lisa and more than two dozen other former smokers, chronic overeaters, problem drinkers, obsessive shoppers, and people with other destructive habits. All of the participants had one thing in common: They had remade their lives in relatively short periods of time. The researchers wanted to understand how.
So they measured subjects’ vital signs, installed video cameras inside their homes to watch their daily routines, sequenced portions of their DNA, and, with technologies that allowed them to peer inside people’s skulls in real time, watched as blood and electrical impulses flowed through their brains while they were exposed to temptations such as cigarette smoke and lavish meals.
prl.1
The researchers’ goal was to figure out how habits work on a neurological level—and what it took to make them change.

“I know you’ve told this story a dozen times,” the doctor said to Lisa, “but some of my colleagues have only heard it secondhand. Would you mind describing again how you gave up cigarettes?”

“Sure,” Lisa said. “It started in Cairo.” The vacation had been something of a rash decision, she explained. A few months earlier, her husband had come home from work and announced that he was leaving her because he was in love with another woman. It took Lisa a while to process the betrayal and absorb the fact that she was actually getting a divorce. There was a period of mourning, then a period of obsessively spying on him, following his new girlfriend around town, calling her after midnight and hanging up. Then there was the evening Lisa showed up at the girlfriend’s house, drunk, pounding on her door and screaming that she was going to burn the condo down.

“It wasn’t a great time for me,” Lisa said. “I had always wanted to see the pyramids, and my credit cards weren’t maxed out yet, so … ”

On her first morning in Cairo, Lisa woke at dawn to the sound of the call to prayer from a nearby mosque. It was pitch black inside her hotel room. Half blind and jet-lagged, she reached for a cigarette.

She was so disoriented that she didn’t realize—until she smelled burning plastic—that she was trying to light a pen, not a Marlboro. She had spent the past four months crying, binge eating, unable to sleep, and feeling ashamed, helpless, depressed, and angry, all at once. Lying in bed, she broke down. “It was like this wave of sadness,” she said. “I felt like everything I had ever wanted had crumbled. I couldn’t even smoke right.

“And then I started thinking about my ex-husband, and how hard it would be to find another job when I got back, and how much I was going to hate it and how unhealthy I felt all the time. I got up and knocked over a water jug and it shattered on the floor, and I started crying even harder. I felt desperate, like I had to change something, at least one thing I could control.”

She showered and left the hotel. As she rode through Cairo’s rutted streets in a taxi and then onto the dirt roads leading to the Sphinx, the pyramids of Giza, and the vast, endless desert around them, her self-pity, for a brief moment, gave way. She needed a goal in her life, she thought. Something to work toward.

So she decided, sitting in the taxi, that she would come back to Egypt and trek through the desert.

It was a crazy idea, Lisa knew. She was out of shape, overweight, with no money in the bank. She didn’t know the name of the desert she was looking at or if such a trip was possible. None of that mattered, though. She needed something to focus on. Lisa decided that she would give herself one year to prepare. And to survive such an expedition, she was certain she would have to make sacrifices.

In particular, she would need to quit smoking.

BOOK: The Power of Habit: Why We Do What We Do in Life and Business
3.47Mb size Format: txt, pdf, ePub
Read Book Download Book
ads