Read The Prince of Midnight Online

The Prince of Midnight 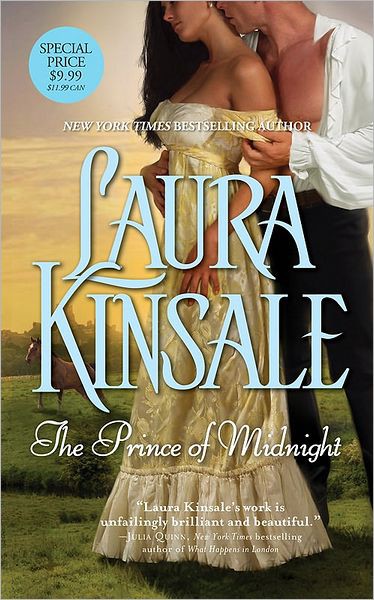 They called him the Prince of Midnighta legendary highwayman, once dashing
and dangerous . . . now a tarnished, forgotten hero, exiled and alone.

She sought his fabled skills in the ruins of a French castlea proud and
desperate English beauty, drawn to the myth . . . but bewildered by the man.

Across perilous mountains and tempestuous seas, together they pursued their
separate dreams  of vengeance, of passion, of glory reborn . . . kindling the
all-consuming fires of a bold and unexpected love that would set the midnight
skies magnificently ablaze.

The Prince of Midnight
Laura Kinsale

This title first published in Great Britain 1991 by

This first hardcover edition published in the U.S.A. 1991

by SEVERN HOUSE PUBLISHERS INC of

by arrangement with Avon Books,

a division of The Hearst Corporation.

This one's not for David, either
There'll never be one good enough

The lad had the deep, burning eyes of a zealot. S.T. Maitland shifted
uncomfortably on his wooden bench and glanced again over his wine across the
murky depths of the tavern. It was damnably disconcerting to find that measuring
stare still fixed on him, as if he were up for admission to heaven and not
particularly likely to get in.

S.T. lifted his tankard in a lazy salute. He wasn't proud. He reckoned he was
a long enough shot for paradise that a nod was worth the trouble. If this comely
youth with the absurdly black lashes and vivid blue eyes should turn out to be
St. Peter, Jr., best to be decently civil.

Rather to S.T.'s dismay, the youngster's gaze intensified. The straight, dark
brows drew into a frown and the boy stood, slim and silent, a figure of blue
velvet and shabby gentility amid the usual lot of peasants chattering in
Piedmontese and Provencal. S.T. rubbed his ear and brushed his tie wig
nervously. A vision of eating his
d
é
jeuner
in the clutches of an earnestly holy adolescent made him swig the last half of
his wine and stand up in haste.

He reached down for the packet of sable paintbrushes he'd come into the
village to procure. The string loosened.

He swore under his breath, trying to capture the precious sticks before they
scattered into the rushes that covered the dirt floor.

The soft voice seemed to be behind him. S.T. came upright, turning quickly to
the left in the hope of escaping, but his bad ear tricked him amid the babble of
laughter and conversation. His balance fluctuated for an instant; he grabbed
instinctively for the table and found himself face-to-face with the youth.

A bolt of alarm shot through him. The words were French, but it was very
stilted French, and a name he hadn't been called in three years.

He'd been half expecting to hear itfor so long that it didn't even sound
remarkable. 'Twas the voice itself that seemed improbable, gruff and toneless,
coming from this infant with the fresh, high-colored face. When S.T. had
envisioned the hunters who might track him for the price on his head, he'd
hardly imagined a greenling who hadn't even started a beard.

He relaxed against the table and gazed glumly down at the youth. Was this
youngster all he was worth? He could kill the poor cub with one hand, for God's
sake.

"You are
le Seigneur du Minuit,"
the boy stated, nodding stiffly,
managing the pronunciation of "seyn-yuhr" and "minwhee" with careful dignity. In
English, he added, "I am correct?"

S.T. thought of answering in a torrent of annoyed French which would
undoubtedly go right over the fellow's head. His schoolroom accent sounded none
too steady. But those eyes of burning deep blue had a force of their own, enough
to keep S.T. wary. Fresh faced or not, the child had managed to locate hima
disturbing fact on all counts.

The boy was tall for an adolescent, but S.T. still topped him by a head and
certainly outweighed him by a good six stone. With that slender elegance and
full, solemn mouth, the young whelp looked more like to grow into a dandy than a
thieftaker. He dressed the beau, to be sure, even if the lace at his cuffs and
linen jabot was frayed and grimy.

S.T. gave him a suspicious look. The lad was really outrageously beautiful,
his black hair drawn back off high cheekbones into a short queue; a classics,
perfect nose . . and those eyes,
alors,
like the light through deep
water: nightshade and violet and bluebells. S.T. had seen that effect once, in a
rocky cave at the edge of the Mediterranean, with the sun shafts piercing
aquamarine shadows and playing off jet-black stoneand this against skin soft
and fine as a girl's. The superbly modeled face held high color, a pink that
looked almost feverish. Against his better judgment, S.T. found himself growing
curious about the brat.

"Little speak Eng-lish," He made up the worst accent he could humanly
execute, speaking loudly above the tavern noise. "Little! Good day! Yes?"

The youth hesitated, staring intensely from beneath those slanted brows. S.T.
found himself vaguely embarrassed by the farce. What a silly language, Frenchit
made a man sound like some backstage cardsharp to imitate the proper Gallic
inflections.

"You are not the Seigneur," the boy said in his husky, toneless voice.

"Seigneur!" Did the young dullard suppose that S.T. was going to announce it
to any English stranger who happened along?
"Mon petit bouffon!
I look
a seigneur, no? A lord? But yes!" He gestured down at his jackboots and
paint-stained breeches.
"Bien s
ű
r!
A prince, of course!"

"Je m'excuse."
The youth gave a second awkward bow. "I seek
another." He hesitated, looked hard at S.T., and then began to turn away.

ST. clamped his hand on the slender shoulder. He couldn't afford to let the
cub go quite so easily as that.

The boy's frown deepened. "A man." He moved his hand in a slight gesture of
frustration.
"Un homme."

"Le Seigneur du Minuit?"
S.T. put just a trace of patient patronage
in his tone. "The Lordof the Midnight, eh? Zut! Is a name absurd. I know not
he. You seek?
Pardon, pardon,
monsieur, for why you seek?"

"I must find him." The youth watched S.T.'s face with the intensity of a cat
at a mouse hole. "It doesn't matter why." He paused and then said slowly,
"Perhaps he goes by a different name here."

"Yes. Brown hair, monsieur. I'm told he doesn't like a wig or powder. Brown
hair, dark, but with gold in it. Streaked with gold, all over. Similar to a
lion, monsieur."

The boy nodded seriously. "Yes, they say he is handsome. Quite good-looking.
Tall. With eyes of green.
Comprenez
'green,' monsieur? Emerald? With
gold in them. And gold on his eyelashes and brows." The boy stared at S.T.
significantly. "Very unusual, I'm told. As if someone had sprinkled gold dust
over him. And his eyebrows are quite distinctive, too, so they say" He touched
his own. "With a curl at the arch of them like the horns on a devil."

S.T. hesitated. The blue eyes held constant, no change in expression, just a
shade too level, the tone of voice a trace too mildhe looked down at the youth
and saw someone a thousand years old gazing out of that unfledged face.

It chilled him. There was a devil inside this one, and it knew full well who
he was but chose to play the game S.T. had started.

He carried on with the performance anyway. The only other recourse was to
lure the poor pup out back and hold a stiletto to his throat. S.T. needed to
know how he'd been found . . . and why.

Tapping his forehead, he said wisely, "Ah. Eyebrow.
Je comprends.
See this eye-brow you, and think ... I is he. This seigneur. Yes?"

"But I was wrong. I'm sorry" The smile erased all trace of subterfuge. It
was sweet and wistful and feminine, and S.T. had to sit down to keep from
sinking under the sudden shock of revelation.

For the love of

She was a girl.

He was certain of it. Abruptly and utterly certain. That soft, husky voice
that didn't rise and fall in ordinary tones, but stayed stubbornly gruff; that
skin, those lips, the slender buildoh, she was a female, the sly little cat.
She had the face to carry it off, too, clean and striking, marvelous, with a
full jaw and dramatic brows, and enough height and carriage to pass for a youth
of sixteen. He'd wager a gold guinea that she'd cut her eyelashes to blunt them
that was why they looked so black and stubby.

And he'd wager a hundred on why she'd come. No threat of capture here. No
cunning pursuit to drag him back to England for the king's reward. Just another
damsel in distress, looking for help like a thousand others.

She'd traveled a devil of a long way to plague him.

"Sit," he said suddenly, waving his hand at the rough-hewn table. "Sit, sit,
mon petit
monsieur. I help. I think. Marc!" He shouted for the
innkeeper above the mundane racket of lunchtime.
"Vin . . . H
é
! Vin pour deux. "
He slapped his sheaf of
brushes on the table, straddling the bench. "Monsieur. How you are call?"

"Leigh Strachan." She gave her little bow. "At your service."

"Sra-hon. Srah
-hen."
He grinned.
"Difficile.
Lee, eh?" He
whacked his chest. "I name . . . Este." There was no use trying to hide that;
everyone in the village knew him by it and thought it was vastly Italian of him
to call himself by a cardinal point on the map. "Sit. Sit. Tr
č
s bien. You eat no? Cheese." He reached up and
helped himself to a slab of sausage that swung with the cheese from a rafter
over the table. Slicing off a generous portion of each, he pushed the food
toward her, along with a pot of mustard. Marc brought hot bread, and gave S.T. a
significant glance as he thumped another wine bottle down on the table. With a
defeated grimace, S.T. promised in French to paint his ugly daughter before the
winter was out, which was a considerable capitulation, and enough to send the
aubergiste
off with a smug look and no demand for payment, which would
have been futile in any case.

S.T. glanced at her. He shrugged and poured her wine. If she wasn't starving
he was a pig's knuckle, but these greenlings had their pride. He leaned back
against the wall and smeared mustard on a large hunk of cheese. 'Twas a long
walk uphill back to his castle.

He met her eyes in mid bite and grinned around the bread. She looked
positively pale, but returned the smile bravely. How he ever could have thought
she was a male, he couldn't fathom.

Those eyes. Magnificent. Now how the devil was a man to get up a flirt, with
her dressed in that rig?

"This seigneur," he said, finishing off his bread. "Hair bronze. Eyes of
emerald. Tall man."

"Handsome," she offered, in that husky flat voice.

The little minx. S.T. poured himself wine. "What is this word? Hond-soom."

She took a swig of wine, quite a decent imitation of his. He considered
belching, just to see if she'd copy him.

The Wave at Hanging Rock: A Psychological Mystery and Suspense Thriller by Gregg Dunnett
Heir of the Elements by Cesar Gonzalez
Assassins Bite by Mary Hughes
Breathe for Me by Anderson, Natalie
One Mountain Away by Emilie Richards
The Shadow of the Progenitors: A Transforms Novel (The Cause Book 1) by Randall Farmer
Vorpal Blade by Colin Forbes
Guns of the Dawn by Adrian Tchaikovsky
The Mask of Fu-Manchu by Sax Rohmer
Take It Off by J. Minter