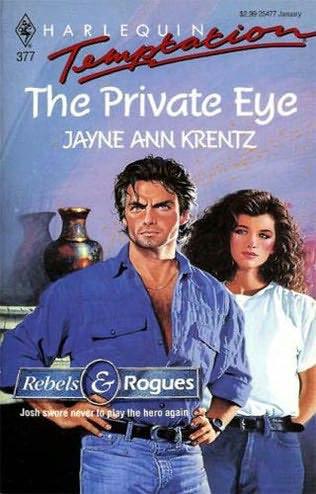 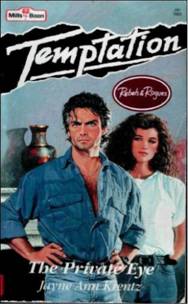 It never pays to play hero.

One of these days, he'd finally learn that lesson once
and for all. Josh reflected. He sat on the edge of the emergency-room
examination table and scowled at the closed door. He was not in a good mood. He
didn't like hospitals and he didn't like realizing he'd been unlucky enough or
stupid enough or slow enough to end up in one tonight.

Could have been worse, he reminded himself. If Eddy
Hodder's knife had struck a few inches lower, he would have been spending the
night in the morgue.

Josh took a cautious breath and winced. The doctor had
just told him his ribs were bruised, not broken, but it was hard to tell the
difference. The big question now was whether or not the ankle was fractured or
just badly sprained. The X-rays would be back any minute.

Everything else had been patched up fairly easily. The
raw scrape on his shoulder had been bandaged quite neatly and the gash on his
forehead where Hodder's knife had caught him had been closed with sutures. Unfortunately
the local anesthetic was already wearing off. He deserved everything he got.
Josh told himself grimly. He was in the wrong business, or maybe he'd just been
in it too damn long,

He was about to continue with the self recriminations
when the door of the emergency room swung open. A young man in a white coat
sauntered in looking far more authoritative than any young man had a right to
look. Josh wondered why doctors, cops and other such professionals were all
starting to look so incredibly young to him. Maybe it was only private
investigators like himself who aged rapidly.

“Good news, Mr. January. It's only a sprain. We'll tape
it up for you and have you out of here in no time.”

“How long for what?” The doctor opened a white drawer
on the other side of the room.

“How long until I can walk on it?”

“Could be quite a while,” the doctor said, sounding
cheerful at the prospect. “You'll want to rest it for at least a week and it
will probably bother you a bit from time to time, after that. We'll send you
out of here on crutches.”

The doctor turned around, holding an elastic bandage in
his hand. His smile lit up the room, “Could have been worse. Heard you nearly
got yourself killed when you went into that building after that Eddy Hodder
character. The cops are in a room down the hall with him right now. If it's any
consolation to you, Hodder's in worse shape than you are.”

“Yeah, that really makes me feel a whole lot better,”

“Thought it would. But you're going to be hurting for a
while, yourself. No getting around it. I'll give you Borne pills for the pain
when you leave. My advice is to take some time off from your job, Mr. January.
You need a few weeks of R and R. That means rest and relaxation.”

“I know what it means.” Josh set his teeth as the
doctor went to work on his ankle. “Take it easy, damn it. That hurts!”

“Sorry. Every jarring movement is going to annoy you
for a while,” the doctor announced happily.

Josh glowered at him. “You enjoy your work?”

Josh winced again as the doctor tugged on the elastic
bandage. “It shows.”

McCray was waiting for him out in the hall. Short,
balding and comfortably rounded at the waistline, McCray was the closest thing
to a friend Josh had. He was also Josh's partner in Business Intelligence and
Security, Inc. one of the biggest private security agencies in the Pacific
Northwest.

McCray shook his head ruefully as Josh swung forward on
the crutches. “Well, well, well. Aren't you a sight. How do you feel?”

“Yeah, that's kind of how you look, to tell you the
truth. I've signed the paperwork for you and I've already talked to the cops.
Gave them a full report. We're free to go.”

Josh shifted his shoulders, trying to get more
comfortable on the crutches. All he succeeded in doing was sending shock waves
through his bruised body. “The girl okay?”

“The girl's fine. Mad as hell at you for ruining her
life, she says, but fine. Her boyfriend, Hodder, was on parole when he pulled
this kidnapping stunt. He's headed straight back to prison and will probably
stay there awhile. The young lady's father, our client, is everlastingly
grateful, of course.”

“Send him his bill first thing in the morning. Might as
well take advantage of the gratitude.”

“My, you are feeling nasty tonight, aren't you?”

McCray pushed open the glass doors of the emergency
room and Josh hobbled out into the cold Seattle night. “You know what, pal?”

“You need some time off. Maybe a month or so.”

McCray held up his palm. “I'm serious, January. You're
burned-out, you're beat-up and you've got a real bad attitude. What you need is
a month of easy living.

You need someone to wait on you hand and foot. You need
home-cooked meals, tea and scones in the afternoon, and a stress-free environment.
In short, you need a complete change of scene.”

“You got any special place in mind?” Josh asked,
irritated.

“As a matter of fact, I do.” McCray opened the
passenger door of his faded blue Oldsmobile. “Get in. I've got a letter I want
you to read.”

“Here, let me have those crutches. I'll put them in the
back seat. The letter's on the dash.”

Josh lowered himself gingerly onto the car seat,
grimacing as he eased his left leg inside. He saw the envelope sitting directly
in front of him on the dash. He picked it up and glanced at the letterhead. The
bright lights outside the emergency room provided enough light to read the
words “Peregrine Manor.”

Josh opened the envelope. A colourful brochure
depicting a fanciful Victorian mansion fell out, along with a neatly typed
letter. A glance at the brochure showed that Peregrine Manor promised the
ultimate in cosy luxury and gourmet dining on the spectacular Washington coast.

The letter promised a job.

“I think you should take the case,” McCray told him as
he got behind the wheel.

Josh scanned the contents of the letter. “This isn't a
case. It's a joke. This Ms. Margaret Gladstone obviously has a vivid
imagination,”

“That's the whole point,” McCray said patiently as he
pulled out of the hospital parking lot. “A cushy setup. A piece of cake. A
snap. You get all the perks of a fancy luxury inn for a month and in exchange
all you have to do is a little sleuthing for the sweet little old lady who
wrote that letter.”

“Piece of cake, huh? What makes you think this Miss
Gladstone is a sweet little old lady?”

“Who else would write a letter like that except some
old-fashioned little spinster lady? What have you got to lose? You need to get
away for a while. Josh. We both know it. You aren't going to be any good to us
at BIS until you get out of this lousy mood you've been in for the past few
months. Like I said, you're burned-out, pal. You've been in the business too
long.”

“You've been in it just as long,” Josh muttered.

“Yeah, but it hasn't been nearly as hard on me. I don't
get personally involved the way you do. I'm a deskman.”

It never pays to play hero
, Josh thought again. He glanced down at the letter lying on his
knee. Something told him Miss Margaret Gladstone was not a little old lady,
sweet or otherwise. And his hunches were almost always reliable.

Josh wondered why he was suddenly consumed with curiosity
to know more about the woman who had written the crazy letter promising an even
crazier job, Maybe he did need to get away for a while.

A black car turned into the driveway and drove straight up to the
front door of Peregrine Manor. It was five o'clock and already dark. A driving
November rain drummed against the windows of the parlour so that the people
gathered there could not see who was driving the vehicle. But there was little
doubt as to the identity of the new arrival.

“I reckon that'll be our man,” the Colonel said with
satisfaction. He pulled a gold pocket watch out of his well-worn dinner jacket
and peered at it. His white moustache twitched. “Right on time. Good sign. I
admire a man who knows the importance of being punctual.”

“I do hope we've done the right thing,” Odessa Hawkins
murmured in a worried tone. She was seated next to the Colonel, a glass of
sherry in her beringed hand. She, too, was dressed for dinner. Her faded blue
gown was almost as old as the Colonel's jacket, but she wore it with the poise
and elegance that had been bred into her over sixty-five years.

“We've been over this a hundred times, Odessa. It
wasn't like we had a lotta choice, you know. Maggie's right. Sometimes you
gotta get yourself a hired gun to handle this kinda thing.” Shirley Smith took
a swallow of her martini and shot Odessa an irritated glance through the lenses
of her rhinestone-studded glasses.

Shirley was about the same age as the other woman but
her background was considerably different. No one had taught Shirley Smith the
social niceties at a tender age. To her, dressing for dinner meant slipping
into a pair of stiletto heels and an extremely tight, strapless dress of
shocking-pink satin that ended well above her bony knees. She was wearing her
entire collection of rhinestones this evening. She even had a tiara perched on
her heavily teased, brassy blond hair.

The Colonel nodded solemnly and patted Odessa's hand
with deep affection. “Shirley's absolutely right, my dear. You mustn't fret. We
had no choice in the matter. It was time to take decisive action.”

Maggie Gladstone scanned the faces of the three
permanent tenants of Peregrine Manor and mentally crossed her fingers. She
sincerely hoped she had done the right thing. Hiring a private investigator was
an entirely new experience for her. Nevertheless, she'd read enough mystery
novels to be fairly certain what to expect from the man in the black car.
Excitement bubbled up in her. She was about to meet a real live private eye!

“I'll go introduce myself and get him checked into his
room. He's had a long drive from Seattle. I'm sure he'll want to change before
dinner.” Maggie put down her glass of sherry and leaped to her feet.

“Yes, of course,” Odessa said regally. “Remind him that
we dress for dinner here at Peregrine Manor.” She pursed her lips. “I do hope
he is a proper sort of detective. One of the old-school types that one always
finds in those lovely British mysteries – not one of those brash young men who
are always dashing about waving their guns on television.”

Kiss of Pride by Sandra Hill
Murder on the Potomac by Margaret Truman
Deserter by Mike Shepherd
Random Targets by James Raven
The Great Escape by Fiona Gibson
Valaquez Bride by Donna Vitek
Daughters of Iraq by Shiri-Horowitz, Revital
Fatal Thaw by Dana Stabenow
The Tale of the Body Thief by Anne Rice
New Year's Bang by Kimberly Dean