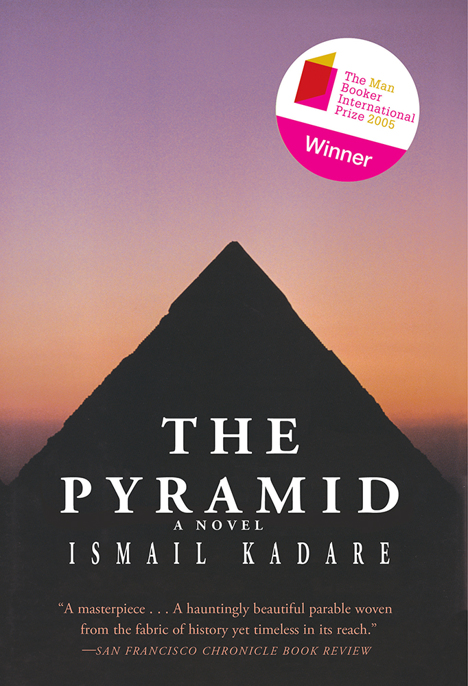 A
LSO BY
I
SMAIL
K
ADARE:

Te General of the Dead Army

Translated from the French
of Jusuf Vrioni by David Bellos,
in consultation with the author

All Rights Reserved. No part of this book may be reproduced in any manner without the express written consent of the publisher, except in the case of brief excerpts in critical reviews or articles. All inquiries should be addressed to Arcade

This edition is based on the second (1993) French edition.

This is a work of fiction. Names, characters, places, and incidents are either the products of the author’s imagination or are used fictitiously.

Arcade Publishing
®
is a registered trademark of Skyhorse Publishing, Inc.
®
, a Delaware corporation.

I
Origins
An Old Idea Resurrected with Difficulty

W
HEN
, one morning in late autumn, only a few months after he had ascended the throne of Egypt, Cheops, the new Pharaoh, let slip that he might perhaps not wish to have a pyramid erected for him, all who heard him—the palace astrologer, some of the most senior ministers, Cheops’s old counselor Userkaf, and the High Priest Hemiunu, who also held the post of architect-in-chief—furrowed their brows as if they had just heard news of a catastrophe.

The courtiers held back for a moment, scouring the sovereign’s countenance in the hope of discerning in it a trace of irony, and then (as each would tell the story later on) they tried to take heart from the “perhaps” that the Pharaoh had muttered. But Cheops’s visage remained impenetrable, and the courtiers’ hope that his words had been just one of those frivolous pronouncements that young monarchs entertain themselves with over a luncheon became increasingly threadbare. Had he not had two of Egypt’s most ancient temples closed down just a few weeks before? And then ordered the posting of a decree that forbade Egyptians to indulge henceforth in sacrificial practices?

Cheops was also trying to plumb their expressions. An ironic glimmer in his eye seemed to be asking: Does that distress you so much? As if it were not my pyramid, but yours! O Re, see how servility has already marked their faces! How will it be in years to come when I shall be older and harsher?

Without saying a word, without even according them a glance, he rose and left.

As soon as they were alone, they turned anxiously to face each other, What has befallen us ? they whispered. What is this misfortune? One of the ministers took ill and had to lean on the wall of the balcony. The High Priest had tears in his eyes.

The spirals of sand stirred up by the wind shimmered outside. With bewilderment on their faces they gazed at these vortices reaching toward the heavens. They stayed silent, and only their eyes appeared to say: By what stairway wilt thou rise on high, O our sovereign? When the day comes, how wilt thou climb to the firmament, there to change in your turn into a star, like all other Pharaohs? How wilt thou illuminate us?

They spoke among themselves softly, then went their different ways. Two of them went to seek an audience with Khentkaus, the sovereign’s mother; another went to get drunk; the craftiest went down to the cellars where the old archives were kept, so as to find old Ipu, the one-eyed scribe.

For the rest of the autumn no one spoke again about the pyramid, not even at the ambassadors’ reception, where Cheops, intoxicated with drink, let out things that it is not fitting for a monarch to mention in the presence of foreigners.

The others to whom he had confided his plan nursed the hope that it was just a joke, and even sometimes thought that it was probably better not to allude to it again, as if the idea, if it were no longer stirred, would just sink into the sand by itself. But the opposite hypothesis was so fearful that they thought of nothing else, night and day, save the means of preparing themselves to deal with it.

Some still set great store by the Queen Mother, despite the absence of any encouraging sign from her quarter, while the majority pursued their research in the archives.

The more they burrowed, the harder their work became. A good many papyri had been lost, others were damaged, and even the extant scrolls contained obliterated and excised passages, often with a marginal note “By Order of On High,” or indeed without any note at all.

All the same, even the truncated papyri provided them with all kinds of information relating to the object of their search. There was almost everything about the pyramids: their prefiguration in the early tombs called mastabas, the history of the first pyramid, of the second, of the fifth, of their successive alterations, the increase in the size of the base, of their height, the secret embalming formula, the first attempts at robbery, the plans intended to halt such profanation, various accounts of the haulage of the stones, of the granite blocks used to close off the entrances, decrees elevating this or that foreman to this or that rank, death sentences, sketches that were either incomprehensible or specially drawn so as not to be decipherable, etc.

All that was more or less straightforward, but the main aim of their research continued obstinately to escape their grasp among the jungle of papyri, though it winked at them here and there before disappearing again, like a scorpion bolting into a hole. They were hunting for the idea that had led to the conception of pyramids, the secret reason for their existence: and that was what kept on eluding them. It was hidden mainly in obliterated papyrus fragments, and it only ever surfaced from them for an instant at a time.

A Teardrop on the Cheek of Time: The Story of the Taj Mahal by Diana Preston, Michael Preston
A Soldier's Return by Judy Christenberry
Wanting It All: Michael and Sarah by C.M. Steele
MadLoving by N.J. Walters
Silent Star by Tracie Peterson
Slave Of Dracula by Barbara Hambly
Witch Is Why The Laughter Stopped (A Witch P.I. Mystery Book 14) by Adele Abbott
Raw Medicine (A Medical Romance Short Story) by Hawkes, Elizabeth
The Blacker the Berry by Wallace Thurman
Date With Death (Welcome To Hell) by Langlais, Eve