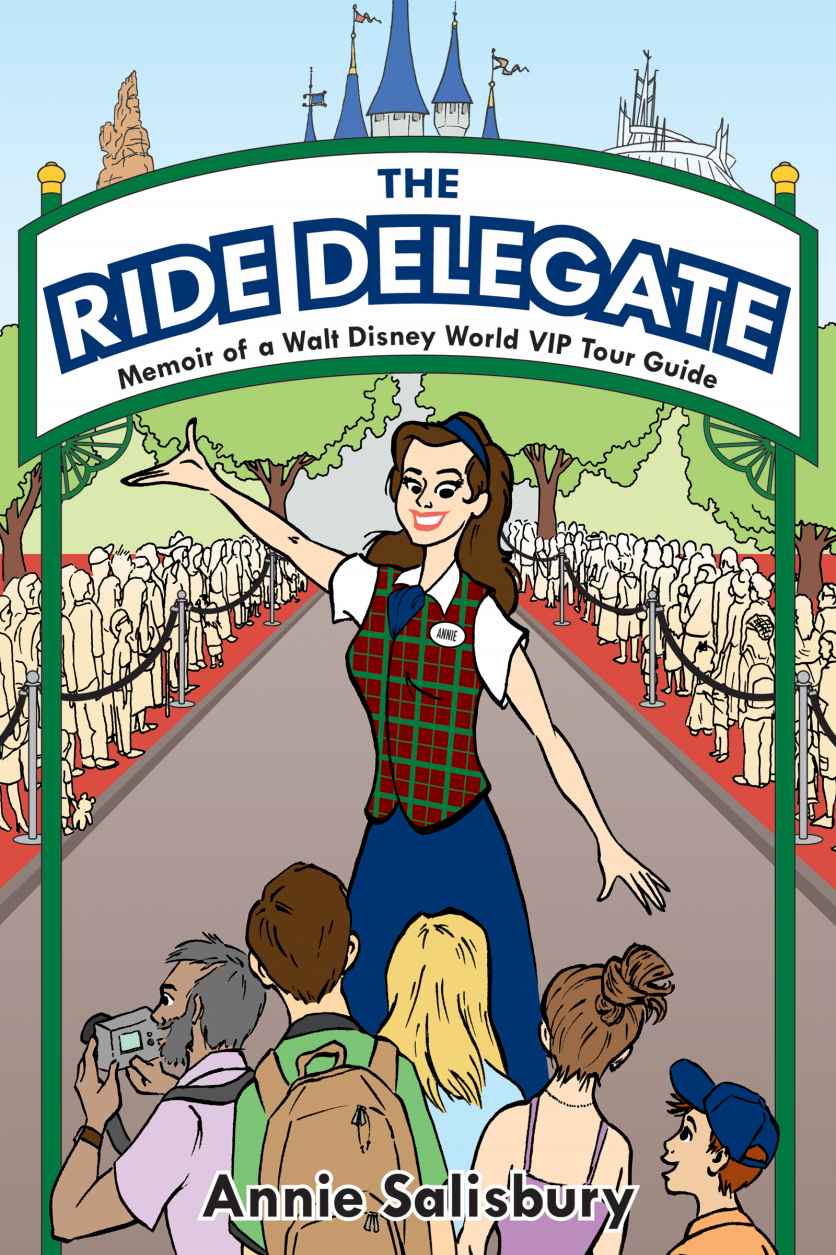 All rights reserved. Except as permitted under the United States Copyright Act of 1976, no part of this publication may be reproduced or distributed in any form or by any means, or stored in a database or retrieval system, without prior written permission of the publisher.

The views expressed in this book are those of the author alone.

Theme Park Press publishes its books in a variety of print and electronic formats. Some content that appears in one format may not appear in another.

According to Disney Legend, this is all true.

Every Other Coordinator on Disney Property
: The second line of defense after a regular Cast Member.

FastPass
: A reservation ticket to experience an attraction at a designated time with little to no wait in the return queue. RIP: 1995–2014. Predecessor to FastPass+.

Greeter
: The person who stands outside the attraction and waves hello to everyone. Usually in charge of checking FastPass return times.

Merge
: Cast Member at the point where FastPass and the standby line come together.

The Bridge
: The Liberty Square Bridge in Liberty Square where there are actually seats to watch the parade. Designated VIP viewing unless otherwise noted.

Park One
: The parking lot located directly behind Main Street (on Tony’s side). The one and only allowed parking location in Magic Kingdom.

Premium Tour
: The tour for your Next Door Neighbor.

PEP Tour
: The tour for Tom Cruise and his family.

PEPing
: The art of going in the back entrance of an attraction with Tom Cruise and his family.

I was sixteen and sitting in the Beach Club lobby crying
hysterically
. I was crying so heavily that my entire family started to distance themselves from me, with Dad moving to the checkout counter to end our hotel stay, and Mom becoming very interested in the artist doing portraits in the far corner. Even my sisters, ages fourteen and six, didn’t want anything to do with me, as they both slowly drifted apart from this hysterical teenager, now causing a ruckus in a very upscale Disney deluxe hotel.

Why was I crying hysterically? Because Dad had just informed my sisters and I that this was our last Disney World trip
ever
.

“Say goodbye to Disney World,” were his exact words. “You’ll see this place again when you pay for your own family to visit.”

That’s when I broke out into hysterical tears.

My sisters took the news like well-adjusted children and nodded with Dad’s words. Meanwhile, I was all like, blubbering mess, incoherent gibberish,
why would you do this to me
??

At age sixteen I thought I still had a few more Disney trips in me before I was set into the “real world”. I couldn’t understand why my parents weren’t already planning next year’s Disney trip, like they sometimes did during the current trip. It saved some money, and if you know anything about Disney you know that it’s expensive. Why would they want to pass up another family vacation like this? Where were we going to go on vacation next year? I didn’t understand.

My parents wanted to try a new destination, and kept on suggesting places like Europe, and I’d groan and moan and proclaim, “Isn’t that what EPCOT is for?” like the teenager I was back then.

Whether I agreed with it or not, the thought that I wouldn’t come back to Disney World slowly started to sink in, and I sat on the couch in the Beach Club lobby with my knees pulled into my chest and sobbed. At age sixteen I had just discovered the wonders of mascara, and I knew that thick black runny lines were streaming down my face. I was wearing black gym shorts and a blue shirt that said TENNIS across the front of it, like a proclamation that at one point in gym class I had probably played tennis.

An older gentleman slowly started to approach my fetal position on the couch, and I looked up through teary eyes to see who it was. It was the Beach Club lobby greeter, a man by the name of Art. He was the quintessential Southern gentleman and if he told me the ocean was made of jell-o I would have believed him. He was always standing in the lobby when we came back from the parks, all tired and sweaty, but
he
was always chipper and friendly, tipping his white sailor hat to us and calling me “princess”.

“What’s wrong, princess?” he kneeled down to my level and pulled a handkerchief out of one of his pockets. Of course he had a handkerchief on hand, just in case there was a manic child in his presence.

“My Dad [sniff] says we’re never [sob sob sob] coming [hiccup] back to [deep breath] Disney World!” I managed to say to him, though I bet it was nothing less than incoherent. Art understood, though, and he patted my shoulder like he was everyone’s grandfather.

“Don’t cry, princess! You can always come back to Disney World!”

I stopped crying. I don’t know what resonated with Art’s words, but it was like I knew that he was right. It was like he was a magical sage, Grandmother Willow, The Blue Fairy, Edna Mode, Rafiki, and Gusteau, all wrapped into one, and I believed his words wholeheartedly. I used his handkerchief to dab my tears, and handed him back a mascara stained white square of fabric. He chuckled.

“Disney World will always be here for you. You’ll come back.” He had a twinkle in his eye and I bet that if he had snapped his fingers at that exact moment, he would have disappeared in a cloud of smoke like the best soothing Disney animatronic you’ve ever seen.

If only Art knew how right he had been.

Eleven minutes. That’s how long I have before my guests would get off of Jungle Cruise. I ushered them towards the waiting boat ahead of me, making sure that all of them stepped down into the vessel leaving me behind on the dock. That’s a little trick I had learned over time—make sure all of the guests get on first. That way, if you decide at the last moment to slip away there is literally nothing they can to do stop you, because they are fastened under their restraints and you’re standing at the loading dock waving goodbye.

“You’re not riding?” a skipper asks me.

I smiled as wide as I could, and through gritted teeth told him, “Not today!” I looked at my watch. Eleven minutes.

I didn’t have time to watch my guests disappear around the corner on the boat. They were seated inside of the ride vehicle and I was free for eleven minutes. They had already forgotten about me, because they were about to ride a ride! I darted between the skippers standing on the dock and made my way past the queue towards the unloading area. There was a rope net tucked off to the side that separated the onstage world from the backstage world, and I ducked behind it. I looked at my watch. Freedom for ten more minutes.

Picking up my pace, I hurried down the pathway, past Cast Members smoking, past the Jungle Cruise makeshift break area (which was really just a hut with lockers, a sad excuse for a fan, and a water cooler), and into the Jungle Cruise maintenance area. A bottomless hippo laughed at me as I raced up the incline that would take me to Main Street, behind the Emporium, behind the fire station, behind City Hall. Someone yelled hello to me as I walked past, and I threw my hand up over my head to signal that I had heard them, but I honestly didn’t have time for them right now. I had ten minutes and I had to pee.

I pushed open the backstage door to City Hall and then pushed through another door into the women’s restroom, where I unloaded my belongings and took my phones out of my pockets and threw my black purse onto the counter. I should have a water bottle with me, but I had lost that somewhere earlier in the day and I just hadn’t gotten around to buying a new one. I needed a new one; that’s why I had to pee, anyway. It was hot as blazes in the park today and I knew how much fun it was to become dehydrated on a tour, and I couldn’t deal with that strife again. Whenever I had a free second, I bought and chugged as much water as possible. I wish I could say that my water consumption was helping with my skin complexion, but I was wearing so much sunscreen and foundation with sunscreen and oil-controlling powder it was a miracle that my entire face wasn’t encased in zits. The hot summer sun was not helping anything regarding my face.

As I washed my hands, I looked at myself in the mirror. Even I knew I looked tired, and I had gotten a solid seven hours of sleep last night. Was it the sun? Was the sun eating away at my face, making it look like I had been up for days? Was it the fact that I hadn’t eaten anything substantial today, aside from two pretzels in the shape of Mickey Mouse? Was it because I hadn’t had a day off in thirteen days, and still wouldn’t have one off for four more? Was I just perpetually tired all of the time now?

Eight minutes. I didn’t have time to think about this stuff now.

I raced back to Jungle Cruise, now walking so fast I might have been running. My feet hurt with every step because I had worn through another pair of shoes, yet again, and the soles on these no longer functioned as anything other than a thin piece of fabric keeping me off of the hot black sidewalk. I needed new shoes, but I honestly didn’t have the money to go and buy them. Maybe if these guests thanked me well enough today, I could take $20 and go to Wal-Mart and buy another cheap pair to get me through the rest of the month. I just needed a pair to last me a few more weeks. Then I would have time to research and purchase brand-new, comfortable shoes that wouldn’t destroy my feet.

I pushed back the rope net and appeared onstage at the exit of Jungle Cruise. I looked at my watch. Seven minutes. I was making pretty good time today. I looked towards the unload area, where the boats would come into dock, and I could see that two boats away was the wheelchair boat. That would buy me at least another three minutes; I knew the Cast Members had to unload one wheelchair before they could load another. I was so hungry. I had already peed, could I really push my luck and get something to eat, too?

The Jungle Cruise area is crowded, because of course it’s always crowded. I don’t know why someone thought it would be a good idea to place so many things on top of one another in Adventureland, but I wasn’t invited to that meeting way back when. Jungle Cruise sat at the bottom of a hill, and I knew at the top of the hill there was a tiny little food cart that had the best eggrolls, and the only eggrolls, in the park. The eggrolls were delicious. They were like hung-over greasy food and that’s all I could think about right now. I ran up the hill, darting between strollers and wheelchairs and guests mulling about like they didn’t have anything better to do with their time besides stand right in the middle of a walkway in Adventureland.