“Let me get it over,” said Nan. “I had the awful feeling that he knew something
more.
He said it was the sort of place that a murderer would make for; not the businesslike murderer that we know to-day, but the one who would waken to a feeling of guilt. The old-fashioned murderer. It was an elaborate kind of joke for Adam, but there was something in it thatâthat worked me up. Though of course I showed nothing. I tried not to anyway. And then we sat down. He began to look at me and make love with his looks and his words. And then he put his hands on me, notânot roughlyâbutâbut I went mad, screaming and tearing awayâ¦ I don't blame him. I asked for it. He could not know that I was trying toâto conquer the shadow! He caught me and held me. We staggered and I believe I would have gone in. The hump in the water. He pulled, and the face came up, sideways first â¦” Nan's head bowed, her eyes shut, and her hands closed into two tight fists.

Aunt Phemie sat staring at the mountains in a deep anguish. Presently she looked at Nan to find her smiling.

But Aunt Phemie could not match her change of mood and looked about for the tea satchel.

Nan shook her head. “No,” she said. “This is my day. And first of all we're going to bathe. I'm going into that pool there, and you're going into the one below. We need one each for freedomââ”

“Now, listen. Please, Aunt Phemie. Do it. The pool will take it away. Then we'll be washed and cleansed and in our right skins. I'm not asking you lightly. Please.”

“But we have nothing to dry ourselves with even.”

“My dear, look!” And Nan exhibited with a gesture the sky and the sun. “Oh, Aunt Phemie, Aunt Phemie!” and she brought her open hands against her breasts, and smiled, and jumped up.

When they had bathed and drunk their tea and were going down the burnside, Aunt Phemie admitted that a certain lightness had come upon her, for she saw at the same time that not only a lightness but a strength had come upon Nan, and inwardly she marvelled at a something of wisdom which that blithe body out of its terrors had contrived to distil, and again she was aware, as in the cornfield, of hope stirring in the mysterious essence of the world.

Nan told about the hawk, quite naturally now, freed from any stress or mannerism, and they inspected the falls pool in the gorge; but Aunt Phemie said nothing of what had happened there. They left the pool and came back until Nan paused by a path going up slantwise through the birches. It was hardly more than a sheep track. “I have wondered where that goes,” she said.

“You'll have to go on wondering,” replied Aunt Phemie.

“I have the feeling it goes up towards Farquhar's cottage.”

As Aunt Phemie had had the same feeling, she said lightly, “In that case it's too steep for me.”

It was a long climb and once when they rested Nan said, “I'll tell you a queer thing. You know when I was talking about these horrors. The odd bit is that it's yourself, the thing you know as
yourself
that's horrified. You hate these things and want to escape from them. They are not you, not the real you. Yet I suppose they must be, for if you imagine them where can they come from but yourself?”

“I have always found that difficult,” answered Aunt Phemie, “and no amount of dividing up the mind into ids and superegos and censors ever quite convinced me. So I gave it up!”

“I don't care what they say. It's not just developing a conscience. The horror is beyond that, and the I that escapes it is theâis the whole being or soul. It's so easy to have theories about it. But the experience itself has an absoluteness about it â¦ I don't know.” Nan looked about her and saw that autumn had touched the birches since she had been in the gorge last. “I suppose theories are necessary,” she said.

Aunt Phemie laughed as she glanced at Nan and saw her eyes on the yellow streaks painted here and there upon the green leaves. The gorge in the September stillness of the afternoon hung in a tranced beauty.

When they came upon the cottage they involuntarily stood at a little distance from it. It was a long building on a very slight slope, the upper part being the dwelling-house, the lower part the byre. The dwelling-house had a tarred felt roof; the byre was thatched, with weeds growing out of the old straw. The door of the byre stood open, but the entrance to the dwelling-house had been boarded up; the new nailed planks were like scars. The two small windows were dark and blind. They had expected an air of death and desertion but not this ominous stillness, this feeling that the acts of the horrid drama had been left invisibly behind. Nan went slowly forward. Aunt Phemie glanced about her but could not raise her voice to call Nan. She tried to be sensible and glance around, but her eyes on their own were searching ahead for the police inspector's story in the mud. Some hens' feathers about her feet and the deep cloven imprints of hoofs in the grass startled her into realising that, of course, there must have been animal life about the place. She wondered who had taken the living things away and thought of the police. Nan was standing at a little distance from the door of the cottage and Aunt Phemie could see she was hesitating about going to the kitchen window to look in. As she went and took Nan's arm she said quietly, “Come, let us go.” Nan regarded her with a curious, remote smile. “Wait,” she said and left Aunt Phemie, going down towards the byre. She passed the open door slowly, like a curious schoolgirl, and, with a look over her shoulder at Aunt Phemie, disappeared round the lower end of the cottage. Aunt Phemie started after her, then stopped. A touch of panic or anger made her want to shout to Nan to come back. She stood, feeling a horrible nakedness in their intrusion, and glanced about her. This was awful. She waited, suddenly aware that she was guarding the eyes of the windows from Nan. But after a time she could wait no longer and started down towards the byre. A light-voiced “Hullo!” swung her back. Nan had gone right round the building and was now coming to meet her. Aunt Phemie's expression did not soften. “Let us go,” she said, turning away, and they left the cottage, walking in silence.

They went over the rise, saw the moor stretching away below them, the Dark Wood, the fields of Aunt Phemie's farm, and the whole broad familiar valley. The sun had set beyond the mountains; its great afterglow was hazed and silver-molten, with red on massive cloud banks in the south. Nan looked at it all but did not speak. Aunt Phemie took the slanting path down the slope, and presently left it to follow a narrow track amid tall bracken. As Nan contemplated Aunt Phemie's purposeful back, she smiled to herself in a truant way. As they neared the bottom, she asked, “You're not annoyed with me, are you, Aunt Phemie?”

“No,” replied Aunt Phemie calmly and without turning round, “but I didn't like it.”

As they came out of the bracken on a last few yards of green slope, Aunt Phemie stopped.

“You see,” said Nan coming beside her, “I had to be freed from it.”

Aunt Phemie looked at her, at the shy searching humour in the eyes, and said, “You're just a monkey!”

They sat down. “You'll forgive me, my dear,” said Aunt Phemie. “I hadn't thought of it like that. I suppose I felt I should have kept you from it.”

Aunt Phemie looked at her.

“You may think it childish, but try to understand, too. Will you?”

“All these figures of men stalking about, and murder. Did you feel them,” she asked in a quieter voice, “about the old cottage?”

“I put,” said Nan, “a sun-circle round the cottage. I thought that might help.”

“Perhaps it will,” said Aunt Phemie.

“I know what you are thinking. You are thinking: So long as it will help me.” Nan nodded. “But I also said a few words. I won't tell you what. Words of peaceâfor those gone and for those to come. That's all.”

“That was very lovely of you, my dear,” said Aunt Phemie, moved.

“If only we could all do that.”

“I know,” said Nan, “and oh! if only we could be free to talk like this, naturally; not to see the sneering face.”

There was silence for a little and then Aunt Phemie felt, from a glimpse of Nan's expression which had gone still and serious, that all this play was leading to something more definite.

“I am going back to London. I have made up my mind, Aunt Phemie. I am going to help Ranald all I can. I shall give him all that's in me. But I shall never betrayâthis worldâall this, that's in me and you. That's, maybe, all I have to give.”

Aunt Phemie could not speak.

“Perhaps you don't agree with me,” said Nan. “Maybe I understand that, too. But it's what I have got to do. And this timeâI'll not break easily.” She smiled.

“You feel that's your duty? What you can do for yourself and the world?” asked Aunt Phemie quietly.

Nan glanced at her and then picked about the grass with her fingers. “You are forgetting what we found at the bottom of the well of the world.”

Aunt Phemie looked at her.

Nan met the look for a moment with bright glancing eyes. “Love,” she murmured.

Aunt Phemie sat quite still, staring over the moor. Then she nodded. Nan, with a quick look, saw that tears had come into her eyes; in her own profound way, Aunt Phemie had at last understood and agreed.

As they went on, Nan said, “We'll go back through the Dark Wood; it's on our way home anyway.”

Aunt Phemie, through a sudden deeper meaning in the simple words, smiled to her. In a moment Nan was delighted and caught her arm. But some little distance from the wood, Nan stopped dramatically. “Listen!” she said, breathless in the vivid moment. A bird was singing in the Dark Wood. 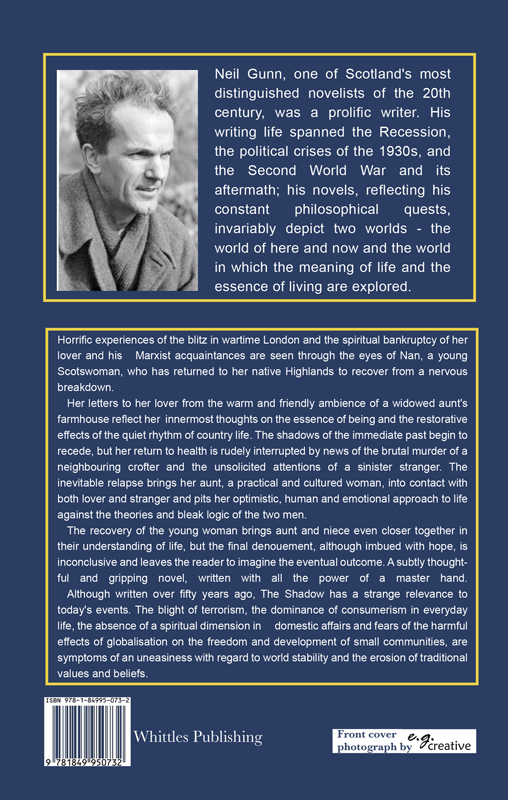 A Christmas Knight by Kate Hardy
A Death in the Family by Caroline Dunford
Getting Ugly by McCrary, Mike
Trolley No. 1852 by Edward Lee
Friendly Persuasion by Dawn Atkins
Mistaken Gifts by Elena Aitken
Hometown Promise by Merrillee Whren
Aerogrammes by Tania James
Alex Ferguson My Autobiography by Ferguson, Alex
Invitation to Love by Lee, Groovy