The Small Backs of Children 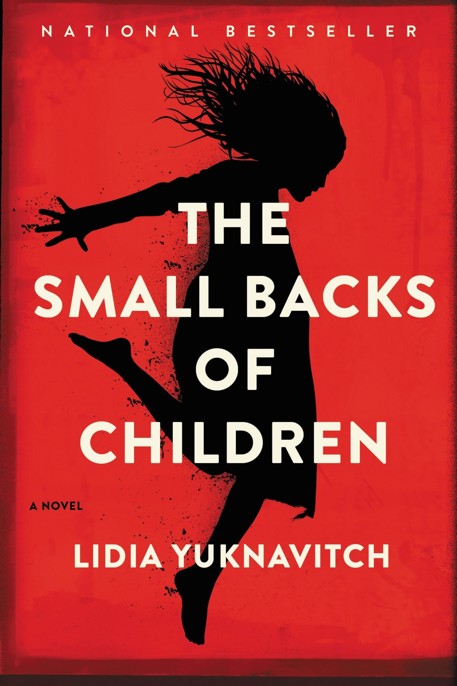 This book is for Andy and Miles Mingo
,
who brought me back to life.

I go where I love and where I am loved,
into the snow.

• In Greek and Roman mythology, each of nine goddesses, the daughters of Zeus and Mnemosyne (the goddess of memory), who preside over the arts and sciences. The Muses were both the embodiments and sponsors of performed metrical speech: mousike (hence the English term “Music”) was just “one of the arts of the Muses.” Others included Science, Geography, Mathematics, Philosophy, and especially Art, Drama. Inspiration, stimulus.

• A woman, or powerful force personified as a woman, who is the source of inspiration and agency for a creative artist. An imagined feminine.

You must picture your image of Eastern Europe. In your mind’s eye. Whatever that image is. However it came to you. Winter. That white . . .

One winter night when she is no longer a child, the girl walks outside, her shoes against snow, her arms cradling a self, her back to a house not her own but some other. It is a year after the blast that has atomized her entire family in front of her eyes. She is six. It is a house she has lived in with a widow woman who took her in—orphan of war, girl of nothingness.

But that night has never left her . . . it is an unrelenting bruise. Its blue-black image pearling in and out of memory forever. Nor will it ever leave her body, the blast forever injuring her spine, a sliver of metal piercing her flesh and entering her, so that all her life she will carry the trace of that moment between her vertebrae.

And then again her mind moves to the moment of the blast,
the singular fire lighting up the face of her father, her mother, first white, then yellow, then orange and blue, then black, then nothing, her head swiveled by the force of the blow away from them. This does not frighten her. What used to be nightmares have transformed into color and light, composition and story. It is with her now. Lifelong companion. Still life of a dead family.

The snow begs her senses now, and she wishes she had a coat. She wishes she had tied her shoes properly, worn proper socks. The moon, however, makes an entire setting for her motion, and in this way she feels . . . lit up.

She hears something not her and not the night and not the white expanse waiting before her. Her feet are cold and she can suddenly feel how numb her hands are, shoved in her armpits. She does not know, at first, what she is hearing. At first it seems like the sound of hummingbirds’ wings, but that is not possible. A fluttering whir, quiet as secrets, there and then gone.

She remembers her father: his eyes, his word.

She hears it again, then, and knows it—a wolf caught in a trap. She looks down near the fence line. It is a wolf, beyond beautiful, with its leg caught in a trap. She moves closer, aware now of how the cold is biting into her. She studies the wolf. The wolf is smart. It is almost finished. She thinks, in only the briefest of thoughts, of releasing it.

The wolf is nearly free.

In its freedom it will lose a leg.

It will be worth it.

More still than a dead person.

Which she has seen, many times—a corpse in snow.

She watches the wolf chew its own leg by the light of the moon, by the rhythm of its journey. The moon makes its slow arc in the sky, and inside the moon’s movement, reflected in the girl’s eyes, the wolf finally frees itself.

It is then that she does something pure bodied. Child minded. She goes to where the rust-orange and black metal of the trap sits holding its severed limb, to where blood and animal labor have reddened and dirtied the pristine white of the snow—like the violence against a canvas. There, without thinking, she pulls down her pants, her underwear, squats with primal force, and pisses and pisses where the crime happened. A steam cloud moves upward from the snow and the blood as the relief of rising heat warms her skin.

Her mouth fills with spit.

This is how the sexuality of a girl is formed—an image at a time—against white; taboo, thoughtless, corporeal.

She opens her eyes.

It runs three legged, like all damaged creatures, across the snow.

She thinks: this is true.

She thinks: this is a life.

She thinks: I do not want to die, but my life will always be like this—wounded and animal, lurching against white. She bends
down and rubs her hands in the blood. She lifts her hands, her eyes, her heart to the heavens, in the space where they say god is, a god she has never known, a god she will replace with something else. Her small hands make what might look to an outsider like a prayer shape. But she is not praying.

She closes her eyes. This is the night it happens. She looks down at her red hands. She laughs, up. She bends down and wrenches the severed limb from the trap. And then she runs toward a self.

What is a girl but this? This obscene and beautiful
making
against the expanse of white. This brilliant imagination, inventing meaning.

A woman must have money and a room of her own if she is to write fiction.

I am in a midnight blue room. A writing room. A room of my own making—with its rituals and sanctuary. I can see my husband and son in the next room fiddling with a video camera. Looking at them together makes my heart feel crushed like a wad of paper. I reach down below my desk and pull up a bottle of scotch. My scotch. Balvenie. Thirty year. I pour myself a shot. I drink. Warm lips, throat. I close my eyes. I am not Virginia Woolf. Do you know how many women can’t afford the room, or have no help, or scratch away at things in bars, buses, closets? I much prefer a different line of yours, anyway: Arrange whatever pieces come your way. Or this: Someone has to die in order that the rest of us should value life more.

I know something about death.

Sometimes I think I am following her into another place or self. She is leading me. Directing the traffic of my life.

I’ve always been suspicious of narrators. And of characters, for that matter. Of the figures of speech we create to stand in for people. Or selves. There is something weird and unnatural about them—how they do what we tell them, how they obey. I don’t trust them. Narrators especially. Chickenshits.

I have been someone else many times.

I was a competitive swimmer for eighteen years.

I was a secretary in a lawyer’s office for a year and a half.

I was a waitress for eight days.

I was a heroin addict for six years. China White.

I was married two times—eleven years, first, and now going on thirteen.

I have slept with women for twenty years.

I have slept with men all my life—from the time I can first remember things—if by sleeping with men one means sexual encounters with men and their dicks.

My mother’s suicide attempts happened when I was eight, eighteen, and twenty-eight. Before she got it right.

I flunked out of college once, quit twice, then battled my way through to the telos of a Ph.D. Became a teacher of literary things. Whatever those things are.

I have been drinking scotch for twenty-six years. Balvenie, thirty year.

I was incarcerated the first time as a minor for eighteen months.

I was incarcerated the second time, of age, for eight months.

I was incarcerated the third time for eight nights.

I was depressed at age eight for one year, but it just felt like being underwater, which was familiar to me, the swimmer. I was depressed the second time at age eleven for two years, then again at eighteen for one more. Then I went under—depression—second self—and resurfaced violently. Recurringly.

Everyone I love is an artist. None of us knows what we mean. Oh, we pretend that we do. Some of us win prizes and lift strangely off the surface of things; others of us toil away, making our own labor into an overrighteous romance. Some of us have jobs, or tenure, or family; some of us are rich, others ride the grant trains; some of us are homeless or nomads, others addicts or recovering or lapsing. Aren’t we all just shooting for a life where art matters?

What a cast we make.

My now-husband the filmmaker, driven to create images for audiences who long for escape from that other movie, life.

My onetime lover the war photojournalist, image purist, traumatized by her own shooting star.

My friend the performance artist, generational do-over, her youth our only chance at passing something on. Fake legacy.

My dearest and fiercest friend, the poet, lover of women and sexual excess and language.

My ex-husband the painter, who held in one hand a brush he used to create new worlds, and held in the other the gun he tried to shoot me with.

We make art, but in relation to what exactly? All the artists we admired from the past came out of the mouths of wars and crises. Life and Death. We come out of high capitalism. Consumerist monsterhood. Even when our lives went to shit, they were still just our lives. Our puny, overdramatic, American lives. And where we are from—our so-called country, defined by the smell of a well-made latte, the silent hum of an all-consuming war machine, and the televised face of Oprah—are we
for
something?
Against
something?

All our artistic origins have been atomized. Dead fathers and brave mothers against the kitsch and speed of this glossy and disposable new century.

What is the story of a self? What is chronology? The history of a life? Which story should I tell to make a narrator, an American
woman writer at forty-five—which plot, which pathos? Because any writer’s life knots are embedded in whatever story they tell.

I have invented hundreds of selves. Men and women.

I have peopled the entire corpus of my experience with fictions.

Who is to say they are not I? I them?

And if I tell the truth, this once, will it be any different from all the other tellings? How? In what sense would it matter?

We are who we imagine we are.

Every self is a novel in progress.

Every novel a lie that hides the self.

This, reader, is a mother-daughter story.